There is no better cut of meat from beef than a standing rib roast, aka bone-in ribeye, aka prime rib.

This cut of meat is sourced from the back of the upper rib area of a steer or heifer and has more marbling (splotches of fat mixed into the meat which appear kind of like veins in a slab of marble) than most other cuts of meat – making it super tender with very little cooking time required. 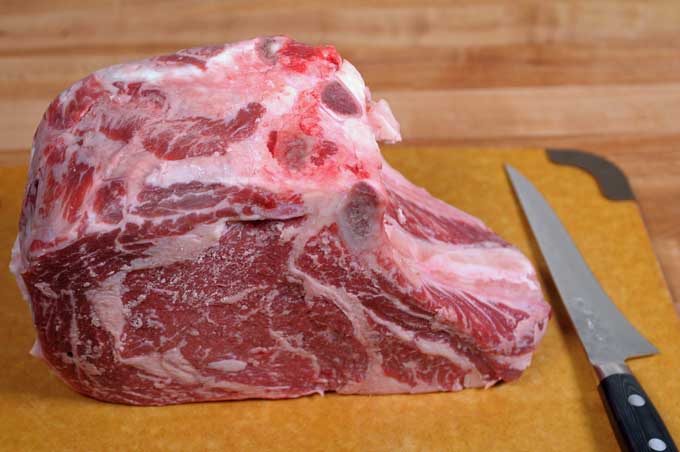 If fact, anything beyond very rare is frowned on by most connoisseurs.

When protein is prepared via roasting or smoking, the bone provides very little flavor.

Some people will argue that bone-in provides better flavor, but I’m here to tell you that in dry cooking methods, the gain is not worth the miniscule (and theoretical) flavor improvement.

I’d prefer to save the bone for making au jus where the marrow and connective tissue and meat scraps can make a HUGE difference in terms of flavor.

When meat is boiled, braised, or otherwise submerged in water and simmered or boiled for hours, the connective tissues and marrow are able to dissolve into the liquid or wine – both of which serve as solvents that assist in pulling out the flavor compounds found in the bones and tendons.

The goal of any cook preparing prime rib is to have a nice, crusty, seared bark on the outside and as much pink as possible on the inside.

When a quarter of the surface is made up of ribs, getting that perfect seared surface is much harder.

Which brings us to:

A Square (or a Cylinder) Shape is Better

The ideal shape for getting maximum surface area for the crust AND for even cooking when inside an oven or a smoker is a cube. If you end up with a roast that is as wide as it is long, by all means, use butcher’s twine and make a cube.

Oftentimes, though, you’ll end up with a shape that is longer on one side, or shorter in one dimension than it is long in the other, and it’s better to shape the meat into a roll.

How to Remove the Bones

But what happens if you get home and realize that you forgot to ask the butcher to remove the rib bones for you?

Never fear. It’s a super easy process to do yourself. You’ll need a sharp, thin boning knife to do the best job. In a pinch, a blade designed for filleting will work. 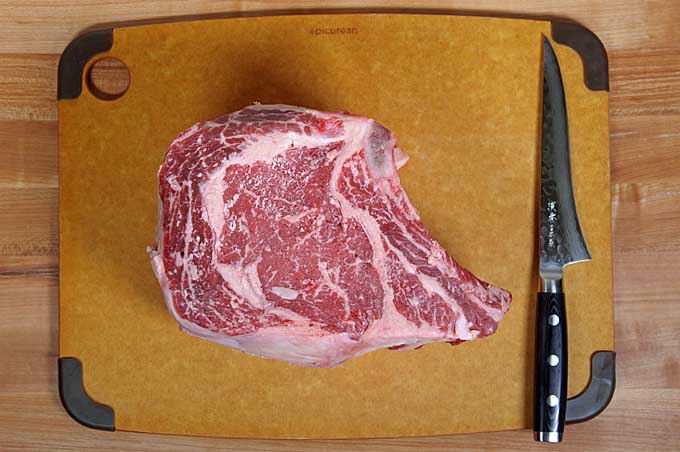 Here’s how you do it:

Turn the meat toward you so that the thin side is up and you can see both the ribs and the flat side as shown below. 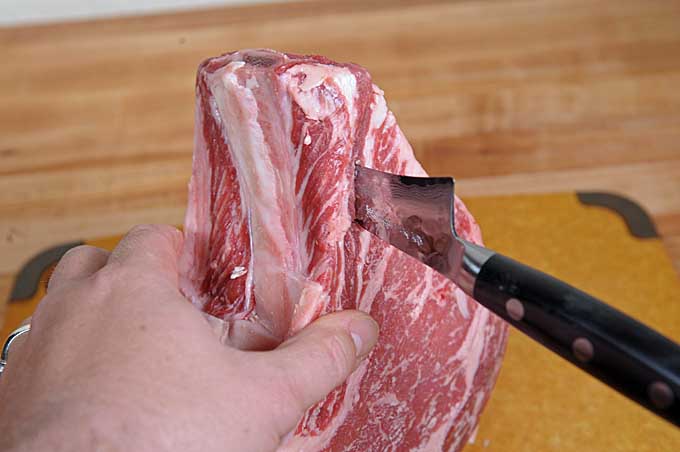 Insert your boning knife into the flesh along the bone with the sharp edge facing up. Slice upward along the bone. If your roast is wider than your knife is long, you’ll need to flip the meat and repeat on the other side.

Make sure you are using steady and firm pressure as you make your cuts. You’re looking for an even and fluid slice. A sharp knife minimizes jerky motions and rough cuts. With a sharp blade, you should only need to apply minimal pressure.

Once you’ve cut the top portion free, reverse the blade and slice downward to separate the flesh from the rib bones as shown below. 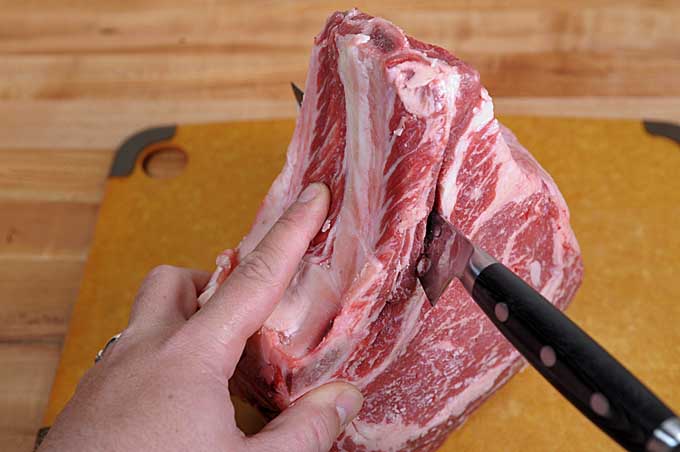 Cut downwards until you hit what is called the “top rib.” This will be a chunk of rib bone that extends farther into the flesh at the thicker end of the roast. 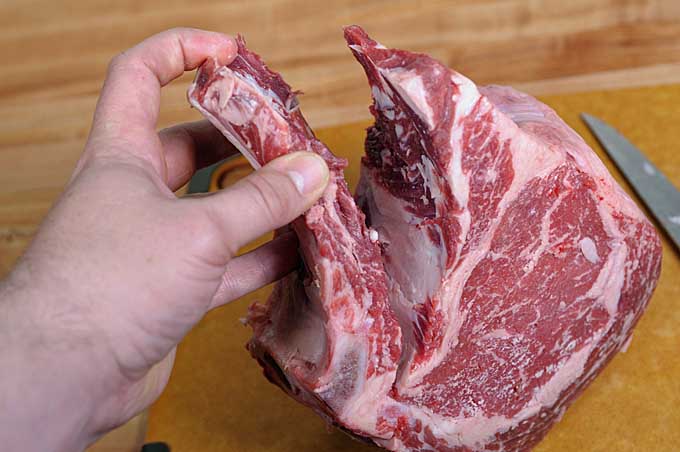 Step 3 – Cut Around the Top Rib

Using your boning knife, work your way around the “top rib” in a sort of inverted “L” motion. 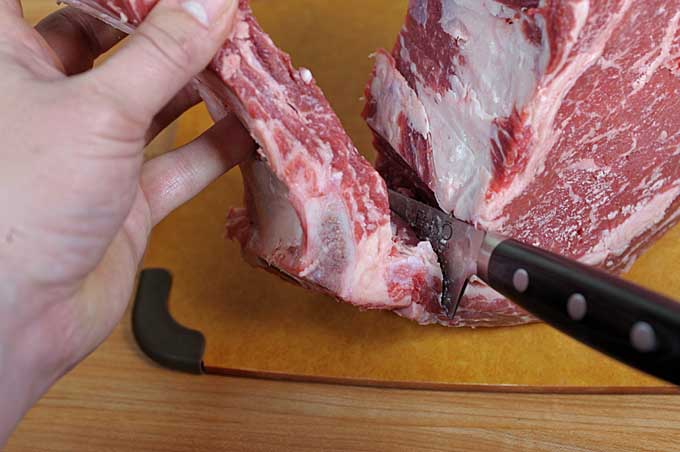 There, now your bones have been removed from your roast.

I told you it was easy.

You can also reverse this process, starting at the top rib and working your way down. I’d recommend doing it the way I describe and illustrate here on your first try, to better help you locate where the top rib actually lies, and to avoid leaving excess meat on the bones. 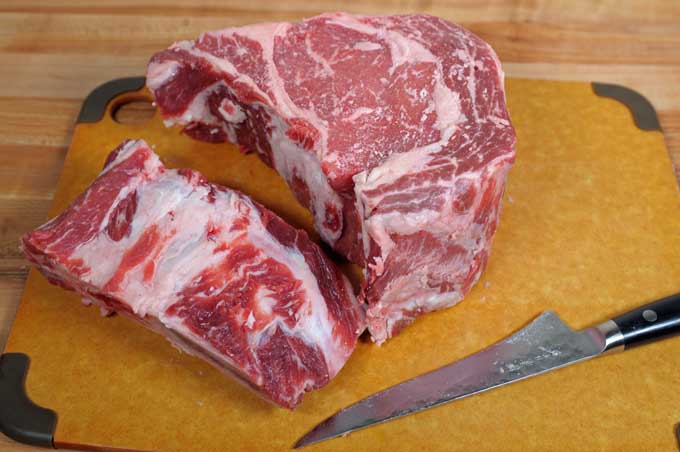 Some folks that are under the belief that bones add flavor will tie the bones back into place with butcher’s twine. Then, after preparation, they cut the twine away and remove the ribs prior to serving.

Once again, I recommend removing them completely for all the reasons listed above, and use twine to “square up” or “roll” your meat.

How do you do that?

How to Roll the Roast

This is another contentious area of discussion, often hotly debated by professional cooks and home gilling aficionados alike.

I like to trim excess fat (the fat cap) from the top of the roast. Most folks don’t like it, don’t eat it, and it is detrimental to forming a good crust. And no – it does nothing for flavor. 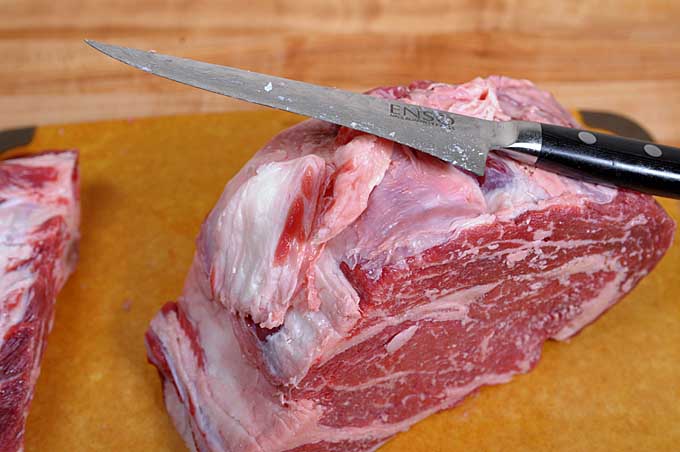 Yep, you’ll probably argue that all the flavor is in the fat. And to some extent that is true.

However, this surface fat adds nothing. It does not melt, it does not soak into the meat, it just make the surface too moist to properly form a crust.

The subcutaneous fat, aka “marbling,” is the kind of fat that provides flavor.

Get rid of the fat cap. You’ll thank me and your guests will thank you.

Bend the roast into a circular shape and tuck one edge under the other as shown below. Wrap with cotton butcher’s string and tie. 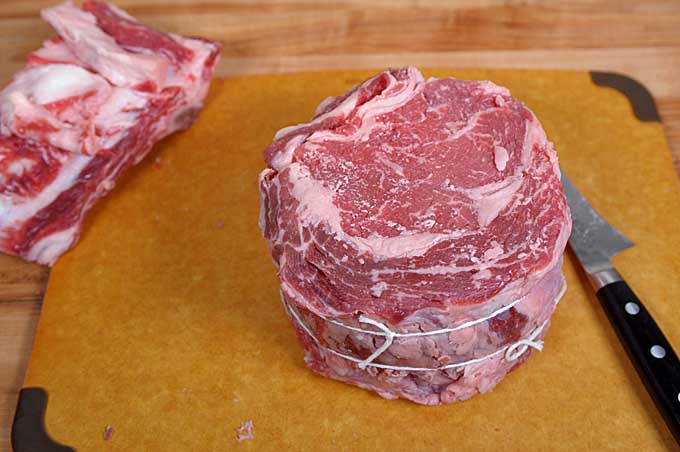 Now your roast is better shaped to ensure even cooking on all sides. Remember, for this type of cut, it is very important to minimize overcooking on any area of the piece of meat. Forming it up into a cube (preferred) or a roll helps to accomplish this.

Do you have an opinion on bone-in versus deboning? Be sure to let us and the other readers know your take in the comments below.

And be sure to check out our other protein-related cooking guides now.

Photos by Mike Quinn, © Ask the Experts, LLC. ALL RIGHTS RESERVED.See our TOS for more details. 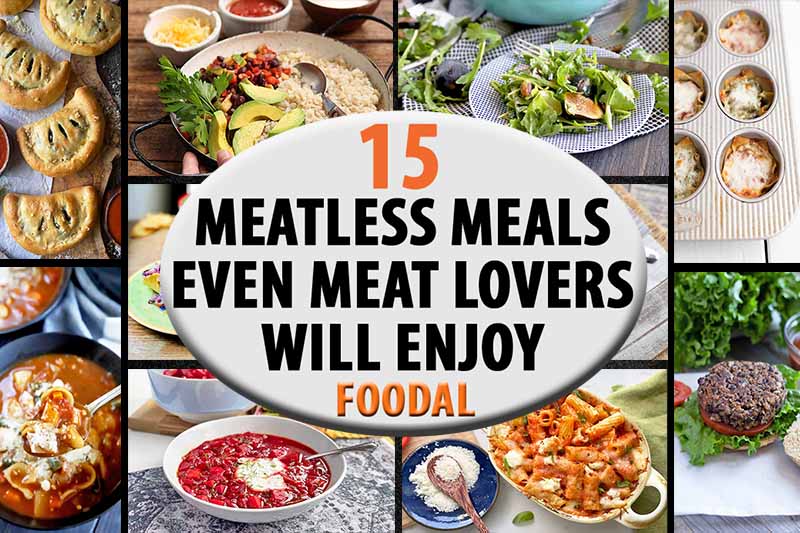 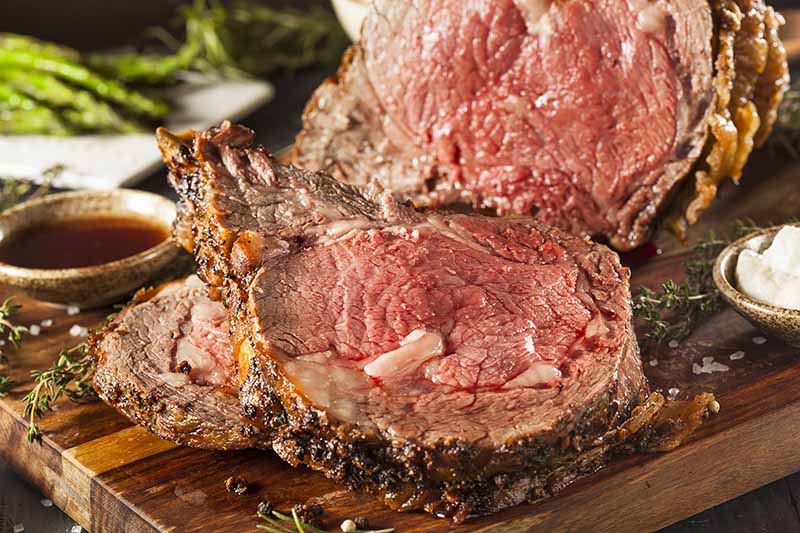