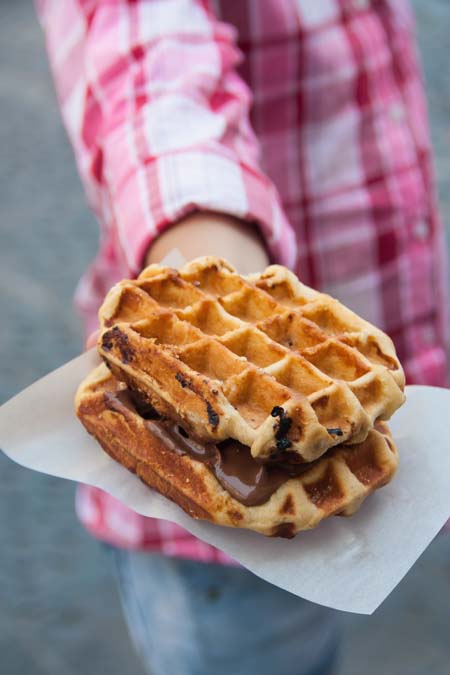 I dreamed about making Belgian waffles for years before actually cracking and buying a waffle maker. During that long time, I had to settle for diner breakfasts if I was actually going to get dressed and go out in the morning, or I would just whip up some pancakes. 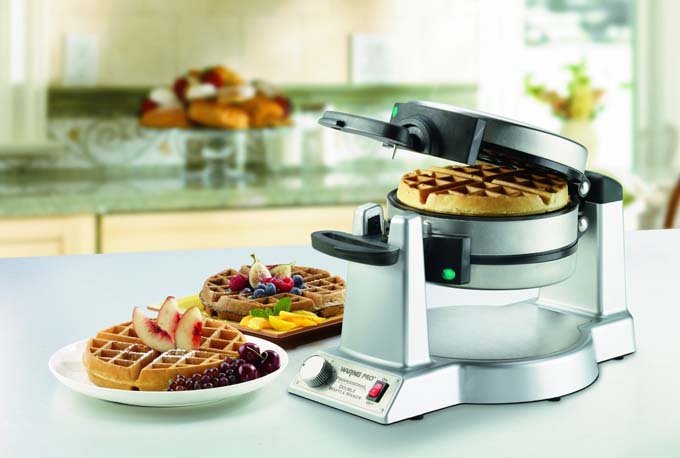 Not that pancakes aren’t delicious, but there’s just something special about waffles. The texture, the pockets that get filled with maple syrup or blackberry jam or whipped cream and fresh strawberries… And, of course, getting to use the iron, which is for whatever reason way more fun than flipping flapjacks in my mind.

I just kept telling myself that a waffle iron certainly wasn’t a necessity, and I should really put that money towards a new nonstick skillet instead.

Even though I had to go through some minor suffering while I waited, I’m glad I didn’t make the purchase right away. If I had, I wouldn’t have spent hours perusing the internet for one, and dreaming about the day when I’d be able to make golden Belgian waffles in my own kitchen.

Eventually, I stumbled across this Waring Pro Double Belgian Waffle Maker, and I am oh-so-glad I did.

If someone had to come up with a complaint about homemade Belgian waffles, it might be that you can only make one at a time, which leaves someone cooking for everyone else before they get to enjoy their own breakfast.

With this maker though, you can make two at once. So if you’re just cooking for you and your partner, you’ll both be ready to eat at the same time! And even if you’re cooking for more than two, breakfast will still be ready in half the time that it would with any other iron. 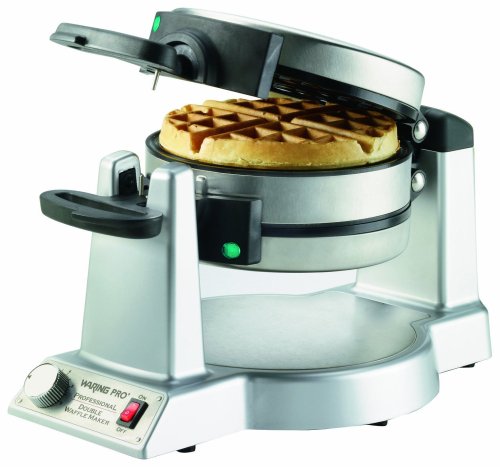 This was a revolutionary feature for me, because really, is there anything worse than watching someone slather on the butter and drizzle syrup while you’ve still got five minutes to wait before diving into your own?

Not to mention, I want to sit down with my family to enjoy the meal, especially since big brunches and breakfasts like this usually get pulled out on lazy weekend mornings.

Even though this meant that I was paying a bit more than I might normally for this small appliance, it was well worth the cost.

A key piece to Belgian irons, as opposed to a standard square griddle, is the rotating function. By pouring the batter in the iron, locking the lid down, and then flipping it upside down, you ensure not only that the batter really does spread evenly, but that it cooks evenly, too.

You can only pour the batter in so evenly across the squares, but the ability to rotate ensures that the job gets done. This function also helps both sides to cook evenly.

This is even more crucial for the double maker because, after pouring the batter in the first iron and locking the lid down, you access the second iron by flipping the machine over. Then you just repeat the process, lock the lid again, and flip one more time.

This griddle features extra deep pockets, which means you can get some of the thickest waffles possible with home use appliances. Measuring in at 1 inch thick, just one will keep you plenty full for the day. It also means you’ve got extra room to get in all the fillings and toppings you could want!

Try getting creative here. We love poached fresh fruit, or even making savory breakfast waffles and topping them with fried eggs. You can even use them to make a hash by layering shredded potatoes or sweet potatoes, or serve them up for dessert topped with homemade ice cream.

Cornbread waffles as a base for chili or pulled pork have become a favorite dinner around our house, too! Leftover mashed potatoes make delicious savory waffles as well.

The interior of this appliance is nonstick, which means you can easily remove the waffles. Just make sure to season it, following the package instructions, before using it for the first time.

Reviewers say that after this initial seasoning, you shouldn’t need to use nonstick cooking spray before each use, and you likely won’t need to reseason it for quite some time. Gone are the days when the crispy exterior gets left behind in the iron!

Now you’ll have fewer burnt fingertips too, because these will slide right off. Another bonus with the nonstick is that it’s very easy to clean up. You should be able to just wipe it down with a washcloth and occasionally pick out any larger pieces that may have been left behind to keep it in order.

Waring made sure that they made a product that would be incredibly easy to use, so anyone could enjoy this delicious breakfast at home. There are two indicator lights, and the machine beeps three times to let you know that it’s hot enough for batter to be poured in, or that they’re done. The indicator light will tell you the same, in case you don’t catch the beeps.

Some users complained that they’d like to see indicator arrows on the handle to tell you which direction to turn the unit, but just be careful not to turn it too aggressively, and this shouldn’t be a problem. There’s a simple on and off switch to get the appliance going.

Using the browning control knob, you can pick just how crispy or doughy you’d like your waffles to be. The knob is on the front of the base for easy access, and there are six heat settings to give you a wide range. This iron produces the stuff of your dreams: crispy on the outside and soft on the inside, with a bit of variation available to suit your preferences.

In case you’re wondering just how this iron manages to cook up two at once, it kicks out 1400 watts of power, which is a whole lot for any small appliance. With this kind of power, you can make several batches without any worry of overdoing it, and trust that it will get them nice and crispy.

The machine is constructed of stainless steel housing and a brushed die-cast base, which are some of the more durable construction materials available for appliances of this type. If you have any reservations about this purchase, it does come with a 1-year limited warranty, so there is some wiggle room if you need it.

Waring also sells this appliance in several other configurations. They make a version for a little less money that is only capable of making one waffle at a time (no fun IMHO), but this is where it gets interesting – they also make another model, the WMR300, that is equipped with a waffle griddle on one side and an omelet maker on the other. 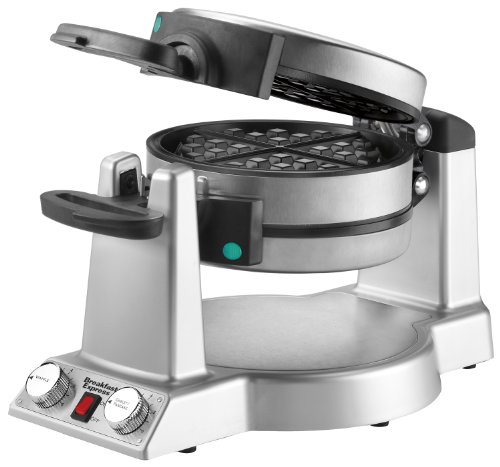 A step up from its sibling, the Waring WMR300 prepares a Belgian waffle and omelet at the same time.

Be aware that the sides of the machine become very hot while cooking, so make sure little fingers stay away from trying to lift the lid, and that you don’t burn yourself either!

Although the machine is quite tall – which can make it difficult to store – the handle does fold, and there is built in cord storage to make solving this common dilemma a bit simpler.

The ability to cook two waffles at once, paired with the almost universally positive reviews on Amazon, made this purchase a no-brainer for me.

Most users say that it produces the perfect waffle: crisp on the outside, light on the inside, which is the most important quality in an iron. All this combined with the ease of use that’s found in the one knob and on and off switch, it’s the perfect appliance to get breakfast on the table.

I love it so much that I’ve even moved waffles beyond brunch, and they’re making regular appearances at the dinner table! If you’re going to get a maker, invest in the Waring Pro Double Belgian. It’s well worth a slightly higher price tag for this kind of quality, and the ability to get double the number of waffles on the table!

Sorry, no posts were found.