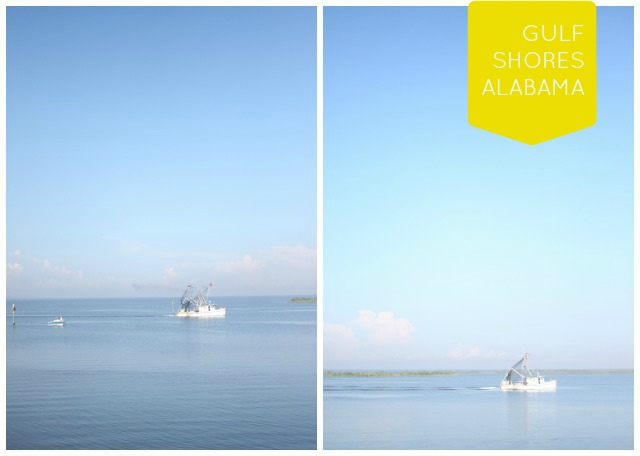 Hello from the land of my thirties! I entered this new decade Saturday, in beautiful Gulf Shores, Alabama, where Tim took me away two days before, as a way to jump up and meet Thirty with a smile on my face, exploring and discovering instead of pining and reminiscing. I don’t know what it is about these big birthdays, the ones that end in zeros, but so many of my female friends have had terrible times with them. In fact, after talking to one friend in particular last month, I burst out crying to Tim about how everybody treats aging like such a bad thing, and so was I going to sink into a depression on August 25 this year? Would I miss my family more than I usually do? Should he brace himself now for the drama? Thankfully, in our case, that outburst seems to have been all the drama and sadness I needed—and also, my husband is a kind, generous soul who responds by telling me he’ll handle everything for my birthday and I can just relax, which, if I’m being honest, is probably exactly why I felt (and feel) like turning thirty is such a good gift. 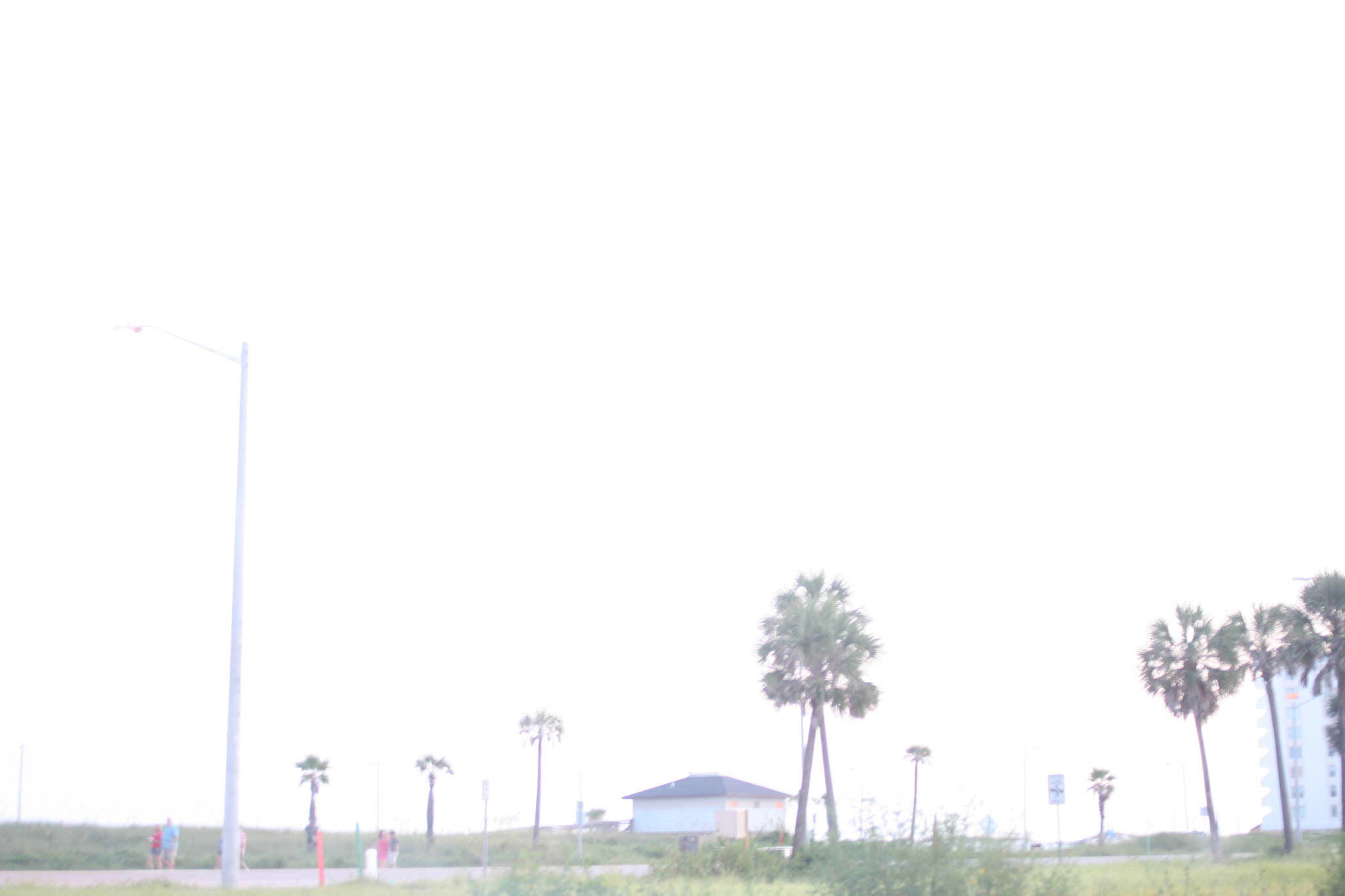 Last year at this time, while Tim and I were planning our wedding, picturing our life together and discussing our budget, we would have told you travel wasn’t on the table. We took a killer honeymoon (gifted from my parents) and then came back, settled in down in Tennessee, thankful. Sometimes we talked about his days of touring with the bands he used to manage or my old days of that full-time salary in my early twenties, but mostly we put travel in the mental box that holds children and home ownership and writing a book someday, and then we sealed it up tight. Someday, we’d love to take some trips. We’ll see.

But then, my friend Kim gave us a night in an Atlanta B&B. Dole sent us to California. A crazy generous friend of friends unexpectedly lent us her beach house in Florida. My parents took us with them to their Wisconsin cabin. Now here we are, married less than a year, and we’ve traveled together to half a dozen different states—all because other people have made it possible. And last week, for the weekend in which I turned thirty, we took the first trip we planned and paid for, we meaning Tim, who surprised me from beginning to end: we headed south. 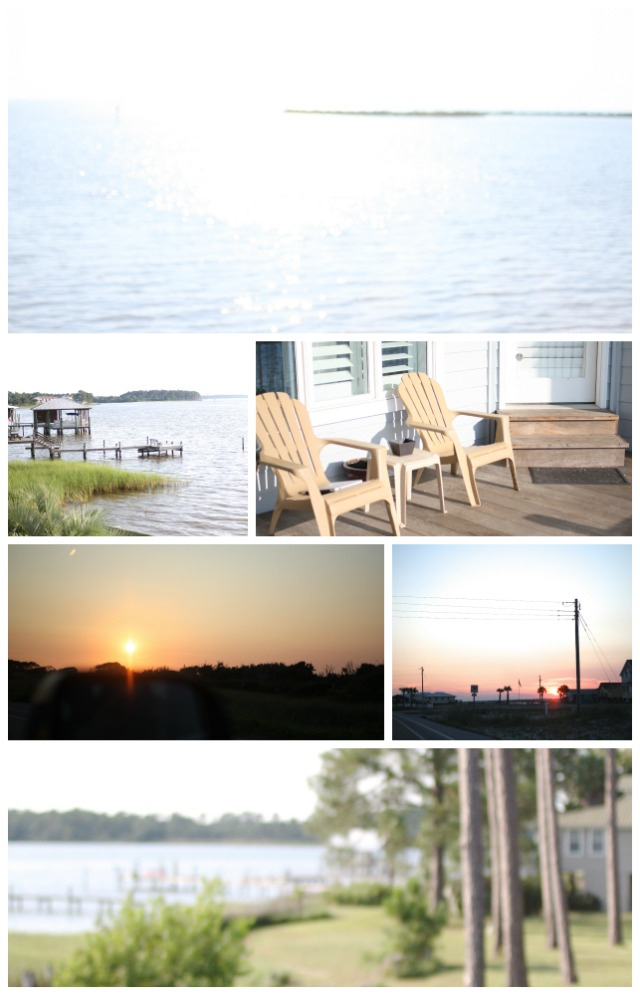 I don’t know about you, but, growing up in the Midwest, when I heard Alabama, I thought, I don’t know, Reese Witherspoon and college football and farmers living in the backwoods. But driving through the state, top to bottom, last weekend, I saw Alabama is both charming small town and beautiful coastal paradise, not to mention hot, hot sunshine that makes flowers and Spanish moss trees and pecan orchards grow.

We stayed in Bon Secour, a former French fishing village whose name means, literally, “safe harbor.” Our bright blue stilt house was right on the bay, filled with furniture out of a Pottery Barn catalog and featuring entire walls of windows facing the water. Friday night, we slept with the bedroom shutters open so I could wake up with the sun, watching it slowly light up the waters and turn the sky pink, drinking in the quiet and the beauty before me on the first day of my thirties. There were shrimping boats sailing by and alligators near the dock and hundreds of seagulls flying back and forth above the calm and tranquil inlet.

Also, southern Alabama is conveniently right between Mississippi to the west and Florida to the east, giving us the perfect opportunity to tour the South. 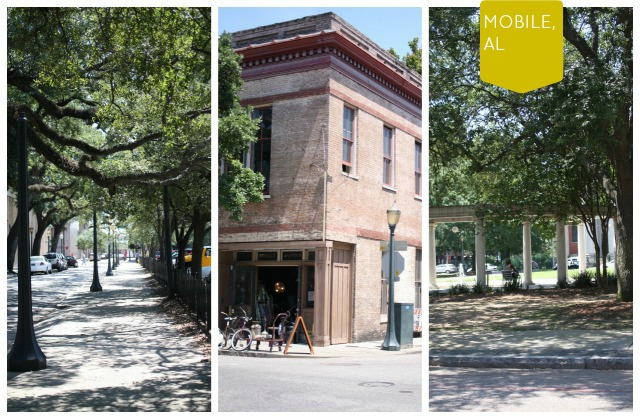 We started with Mobile. Mobile is Alabama’s third largest city, and I wanted to stop there because I’d read online that there was a bakery we’d like, but what we found instead was better: blocks and blocks of old, historic streets, the kind you think of when you think of Southern charm. There was a large town square with benches and bushes and a sculpture or something in the middle. With none of the traffic of a big city, just the tall buildings and crowded corner restaurant where business people and tourists ate outside, we pulled out our cameras and kept saying to each other how much we liked this place, wanting to keep it and anchor it somehow in our minds. 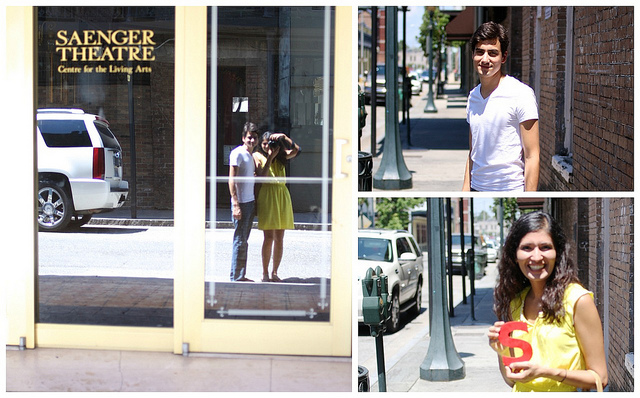 We strolled through an antique store where I bought a vintage letter “S” and the shop owner recommended a wine shop and we found a store of artisan goods that included locally baked spelt and wheat breads. 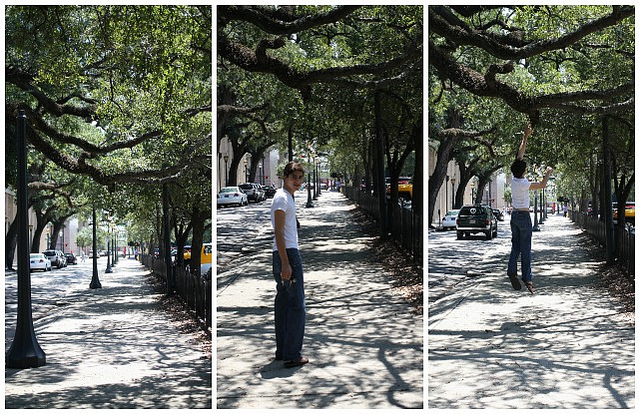 We walked back to our car and I stopped, suddenly, grabbing Tim’s arm and exclaiming that I almost couldn’t handle the beauty of the enormous, hundred-year-old trees before us or the way that they filtered streams of light onto the ground, setting patterns and rhythms, like quilts or wallpaper beneath our feet. Tim jumped to touch tree branches, the lowest ones far above our heads, and I thought how I could live my whole life, however many years it will be, and never see trees like this, and they would still be there, tall and proud and majestic in the middle of Mobile.

From there, we drove through the bottom of Mississippi, along a highway that passes just south of NASA’s Stennis Space Center, and on into New Orleans. The sunny skies turned dark along the way, surrounding Louisiana with ominous gray by the time we arrived, but we didn’t mind. 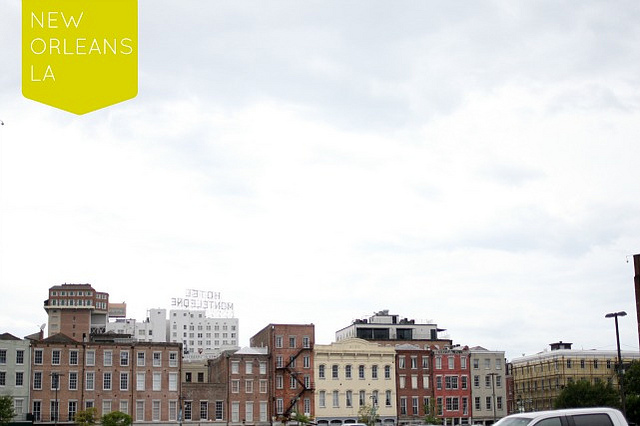 Like Alabama, New Orleans is not what I pictured. Instead of my visions of Mardi Gras, the French Quarter was quiet, while crowded, filled with little shops and balconies stuffed with flowers and another French restaurant with marble counters on every block. Dodging puddles and stepping on cobblestone paths, Tim and I walked from there to the water, where steamboats docked like a scene out of Huck Finn. 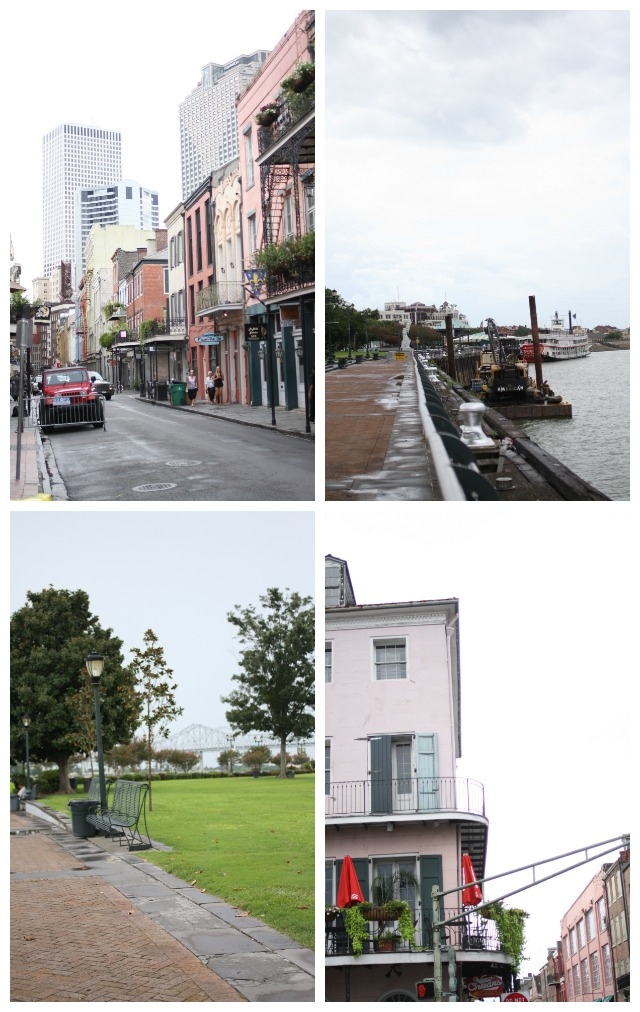 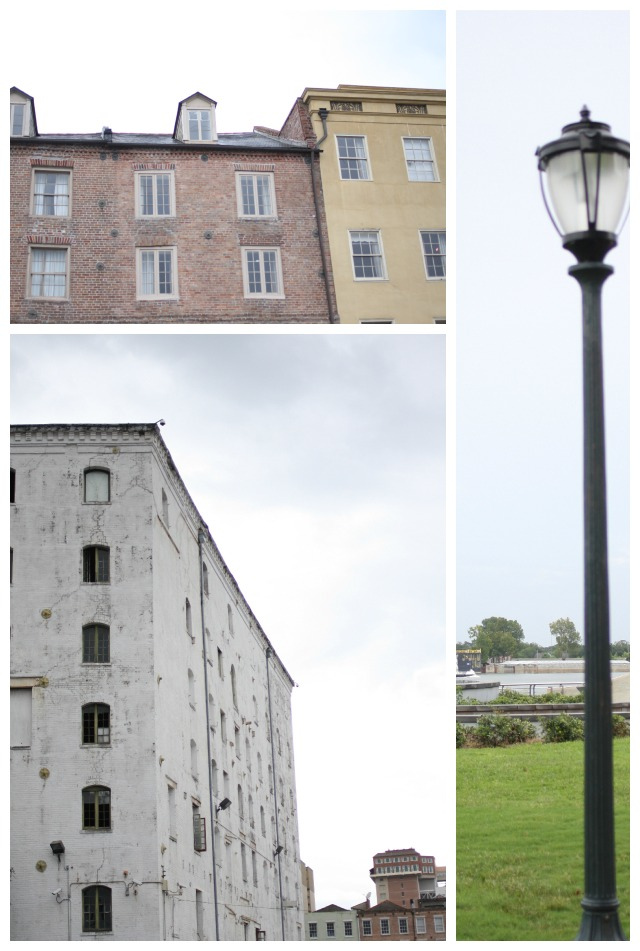 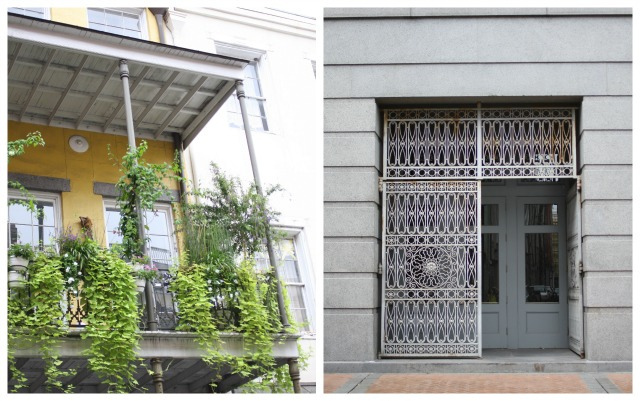 We went to Anthropologie and Whole Foods and other normal big-city things, but it was the architecture that I’ll remember most about New Orleans—the towering buildings that could just as easily be an old European city as they could be one in the deep South. When we’d approached the French Quarter, I’d told Tim, doesn’t that skyline look like an Etsy painting? and I’d imagined it, hanging on our wall. We stayed in NOLA all afternoon, driving home through Mississippi and Alabama late into the night. 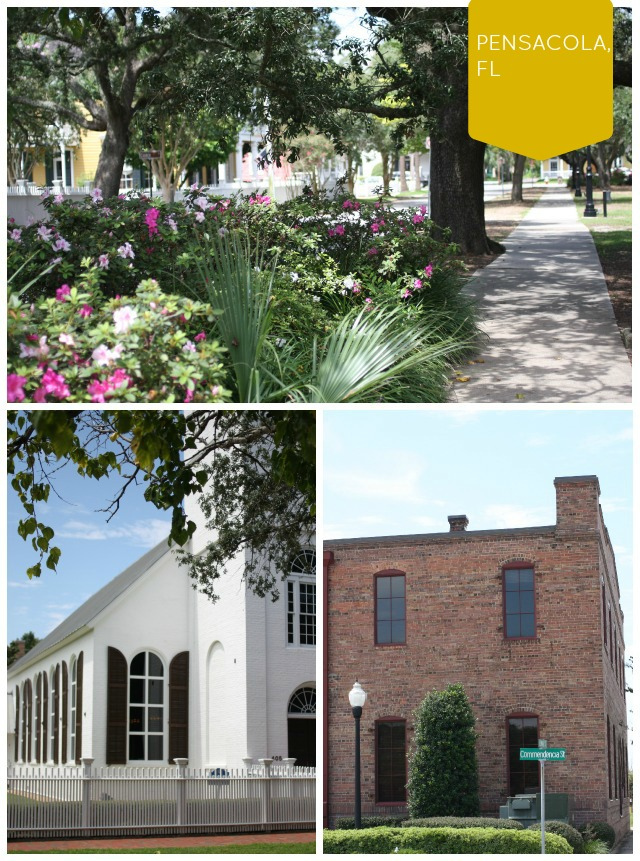 On my birthday, we went to Pensacola, Florida, off to discover the historic district, which claims to have been first settled in 1559, as in, (whoops! who forgot her 1492 history!), before George Washington, before the Puritans or Pilgrims or Thanksgiving. This was, by far, our favorite stop. Pensacola is pristine—sugar-white sand, manicured trees, clean and walkable streets in a downtown filled with little stores selling kitchen supplies or bath products or Intelligentsia coffee. Walking into the historic district is like walking into the set of “The Truman Show,” where all the houses are different shades of pastel, with white framing around the windows and doors, sidewalks surrounding the town square. We saw some men pulling the top off a gorgeous vintage convertible in front of a tall white church with stained glass windows taller than I am, adding a “just married” sign to the back. We walked through a cluster of trees as wide as houses, and Tim climbed a branch, surrounded by so much shade, you’d almost forget you were in Florida in August. 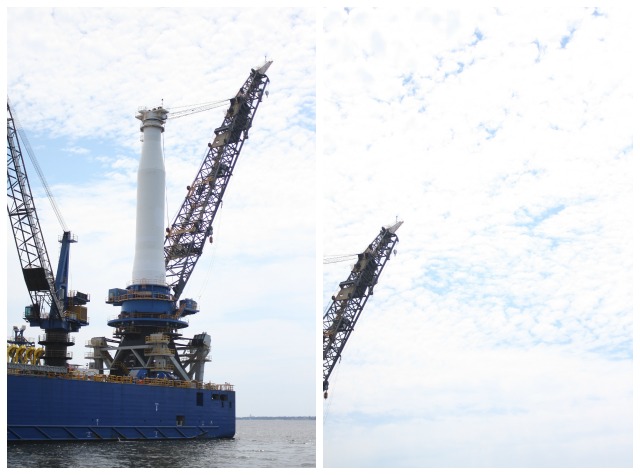 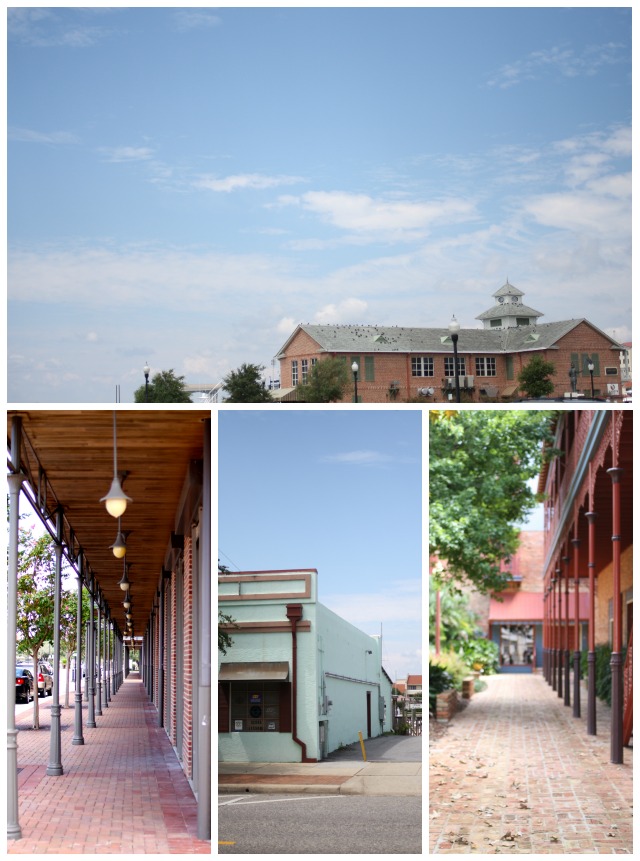 Saturday night, to further celebrate my thirty years, we went to The Wharf in Gulf Shores, kind of like an outdoor shopping mall meets tiny theme park meets restaurants and a boat dock. We had exactly $8 cash in our wallets, and the ferris wheel was $4 each, so we rode it, round and round, taking pictures of each other and the sinking sun like we were teenagers. 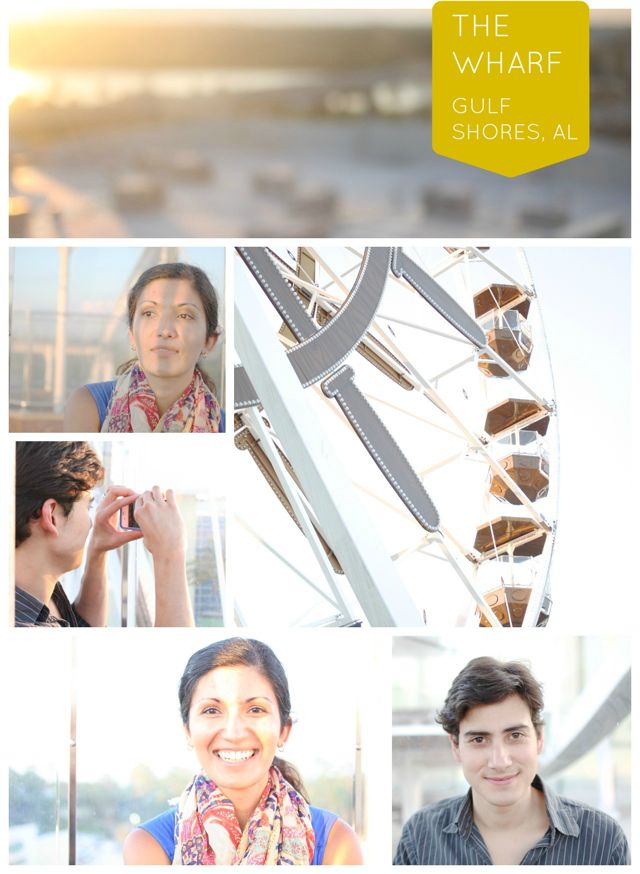 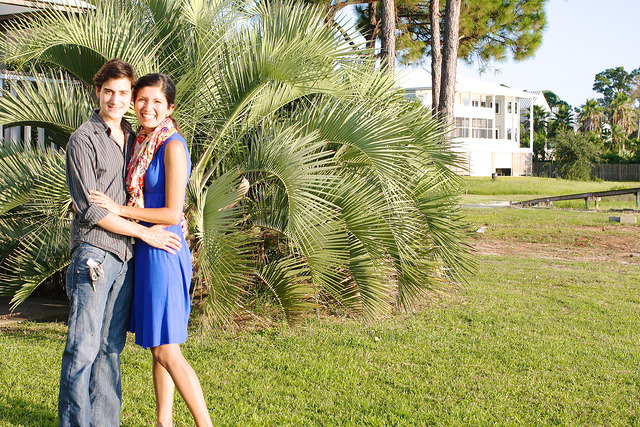 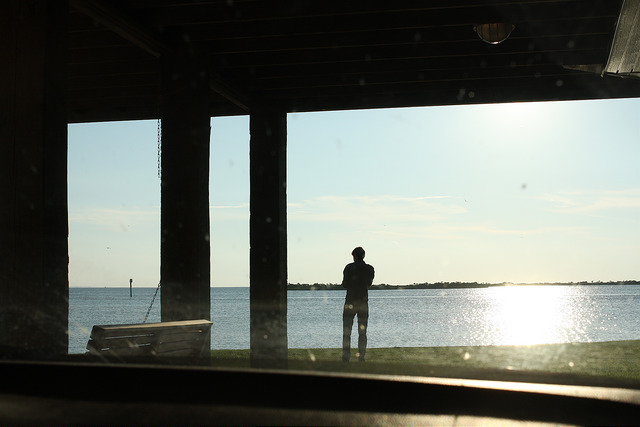 I said I feel like it’s a gift to turn thirty, and a gift is exactly what I mean—to have been given thirty years of sunrises, thirty years of breath and life, thirty years of relationships and experiences and meals and work and history. This weekend, while we pointed the car south and trekked through four different states; when I woke up on my birthday morning to a handful of cards from friends Tim had asked to send them ahead of time; when I talked to my mom and my dad and Adam late Saturday; when friends called and asked, seriously, how I was feeling about this new age; when Tim made me breakfast; when I laid in bed in the quiet and watched the sun over the water, I am relieved to say that all I felt about turning 3-0 was this: pure gratitude.

*We also feel very fortunate to have missed Hurricane Isaac, which, according to reports, is headed for the coast sometime soon, especially because our trip was mostly blue skies and sunshine. Whereas national disasters on the news can often feel far away, having visited New Orleans and Mississippi and Alabama last week puts a very somber tone on the news for us, one that makes it impossible to dismiss the storm as too far away. Our thoughts and prayers are with the people of the Gulf Coast.

47 thoughts on “A Visit to Beautiful Gulf Shores, Alabama”