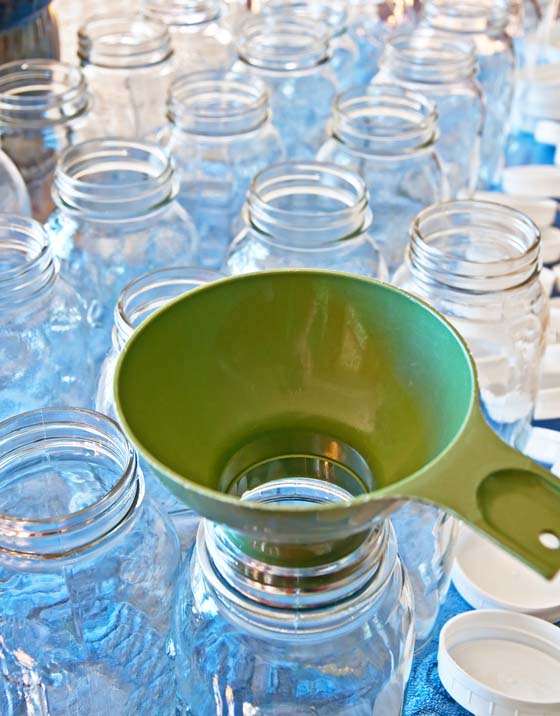 If you’ve always thought canning your own produce would be difficult, labor intensive, time-consuming, and require a lot of expensive equipment you don’t have in your kitchen, well, I used to think the same thing. 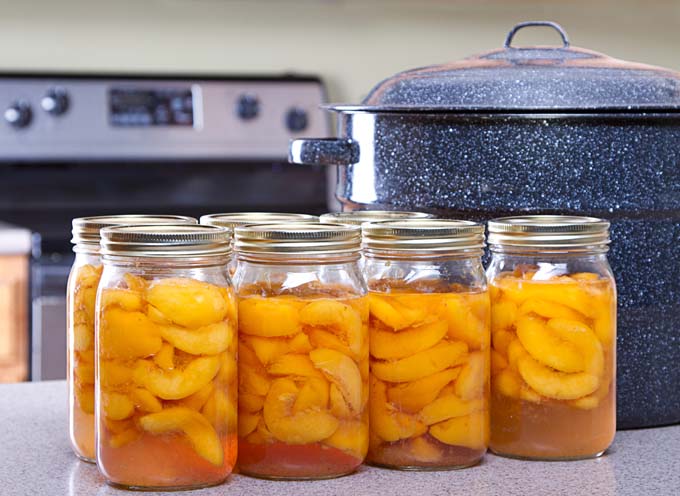 But I also thought it would be really wonderful to buy fresh, local produce in season and preserve it for the winter.

I could save money and have better tasting food than I could buy at the supermarket. Plus, it would be better for my health and for the environment.

This summer I decided to give water bath canning a try and I discovered it’s really not that hard. I was also able to do it using mostly supplies already in my kitchen; I only had to buy a few things. If you’re interested in giving it a try, here’s how I do it.

It really is easy.

To start with, you’ll need a few supplies.

Canning jars with rims and lids. You can purchase canning jars of various sizes, including pint-sized (two cups) and quart-sized (four cups). You can purchase new jars and they aren’t too expensive, but you can sometimes find them at yard sales or on Craig’s List for even less.

You can use used jars and rims, as long as they appear to be in good condition, but you need to use new lids every time because used lids may not seal properly and then your food will spoil.

You can purchase new lids separately if needed. Never try to reuse old glass jars like mayonnaise jars or applesauce jars for canning, because they are unlikely to seal properly.

A really big pot with a lid. You can purchase a water bath canner fairly inexpensively (less than $40, probably), but you can also just use a big stock pot with a lid, which is what I use. It just needs to be big enough that when you put the jars in the pot, you can completely cover them with water.

You really don’t need a pressure canner for this method.

A jar lifter. This is one piece of equipment I really recommend you purchase. It’s a simple tool that you use to grip jars and lift them out of boiling water.

I guess you could just use regular tongs you might have in your kitchen, but they won’t grip the jars as firmly and if you drop one, you risk breaking it, making a mess, and cutting or burning yourself. I bought a jar lifter on Amazon quite affordably.

A wide-mouthed funnel. If you don’t have one of these, you can still can stuff. It will make filling the jars a lot easier and less messy, though. I bought an inexpensive one on Amazon and it was definitely worth the investment.

A ladle or measuring cup. You need something to use to scoop the food into the jars.

Now that you have your supplies, you’re ready to get started. Prepare the fruits, vegetables, salsa, tomato sauce, whatever it is you’re going to can.

Prepare your jars, lids, and rims by sterilizing them (by boiling them) for about 10 minutes.

Remove them from the boiling water and place them on a clean dish towel. If you have a dishwasher, you can sterilize them by just running them through a cycle in the dishwasher. 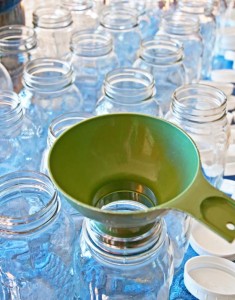 Now you’re ready to fill the jars. Place your funnel on top of a jar and use the ladle or measuring cup to fill the jar with food. Leave about half an inch of space at the top of the jar, known as “head room.”

If you’re following a specific recipe, such as for making and canning salsa, the recipe should specify how much head room to leave.

Run a butter knife around the inside of the rims of the jars, to make sure the contents of the jar settle.

Use a clean cloth to wipe the tops of the rims of the jars to make sure no traces of food or moisture remain that could prevent the lids from sealing properly.

Put lids and rims on the jars. Tighten the rims, but not as tight as you can make them. Tighten them just enough to secure them. This is sometimes referred to as “fingertip tight.”

Bring the water to a boil. Once it boils, put the lid on the pot and boil for about 15 minutes. If you’re following a specific recipe, such as for making salsa, the recipe should specify exactly how long you need to boil the jars.

Turn off the burner under your pot. Spread a clean dish towel on your kitchen counter. Using your jar lifter, carefully lift the jars out of the boiling water.

Place the jars on the towel, leaving a couple inches between jars. Make sure they are not touching each other. Let the jars cool for at least eight hours. Leave them alone during that time.

When the jars are cool, check to make sure the lids are properly sealed. To do this, use your index finger and push firmly on the center of the lids. You should not hear any noise and the lid should not move up and down at all.

If a lid appears to not be properly sealed, you can refrigerate the jar and eat the food in the next week or so. Never boil a jar a second time in order to try to get the lid to seal properly.

Label the jars and store them in a cool, dry place. If food ever looks, smells, or tastes odd in any way when you open a jar, don’t eat it.