“If only we could apply a travelling mind-set to our own locales, we might find these places becoming no less interesting than, say, the high mountain passes and butterfly-filled jungles of Humboldt’s South America.” (Alain de Botton, Art of Travel) 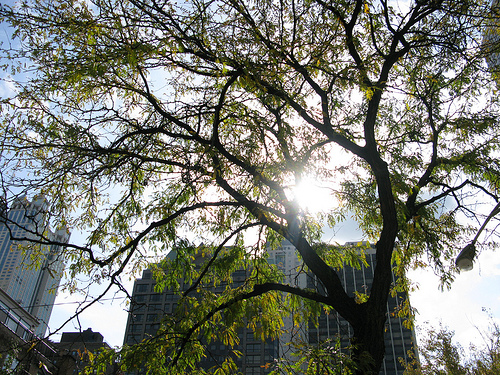 When you travel to a new place, and you see Maine’s thick woods and eat its seafood, and you walk through Colorado’s breathtaking garden of the gods, and you meet Indiana’s farmers and ride its horses, it is easy to be impressed. So much so that when you return to your own city (which, to be fair, isn’t really your city as much as it is the place where you went to school and the place where your brother lives and the place you have always been identified as being from by outsiders, when in reality you keep an address in its suburbs), it is easy to overlook all that has become familiar, saying things like, What is so great about Chicago? while you flip through your pictures and long for where you were. 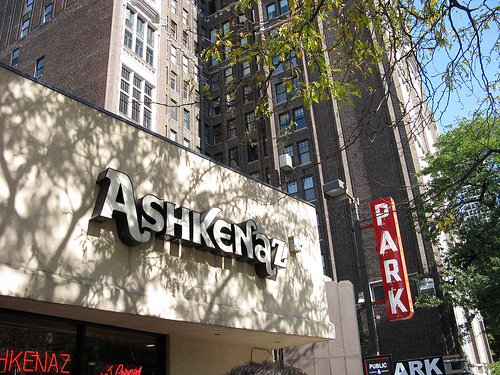 So thank goodness for you all, I mean it, you who remind me how much the Midwest and Chicago matter, in the way that every place matters for its own beauty and people and unique location, and thank goodness for Chicago Food Planet, the very cool company that gave me and a few others the chance to turn a Saturday where we were already planning to meet in the city into a Saturday where we were treated to a tour of new-to-us spots on the North Side. Even after a rainy morning standing outside Union Station hailing a cab, this Second City is winning me over again, at least when it comes to its food. 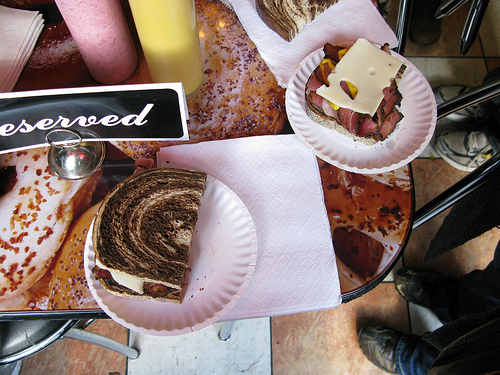 We started at the Ashkenaz Deli (12 East Cedar Street), where I ate my first Reuben sandwich with my first pastrami slices, on marbled rye bread, topped with Swiss cheese, sauerkraut, Russian dressing and a little mustard — wow. This was only the first of seven tastings, and I was already starting to feel full.

Oh, and can I just say that next time? I am all over the matzo ball soup that smelled so good in the shop.

Next was Tea Gschwendner (1160 North State Street), where we sampled naturally sweet Oolong tea and learned all tea comes from one of two plants and all tea is as good for you as green tea, with just as many health benefits. Plus, unlike coffee, tea sets you up for gradual caffeine rises and declines. 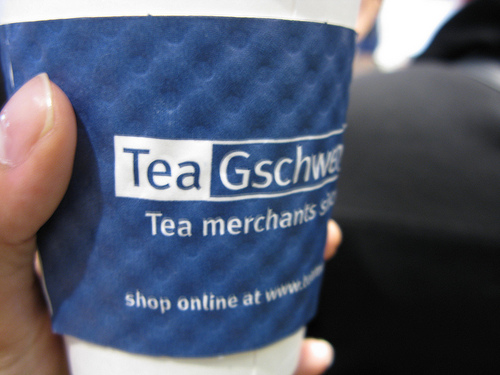 Drinks in hand, our group of 16 followed our awesome tour guide, Nicki, who amazed us with energy and so much information, as we walked a few blocks to the next stop, pausing along the way to learn about some cool architecture of the Gold Coast and Old Town. First thing: did you know where the Gold Coast gets its name? 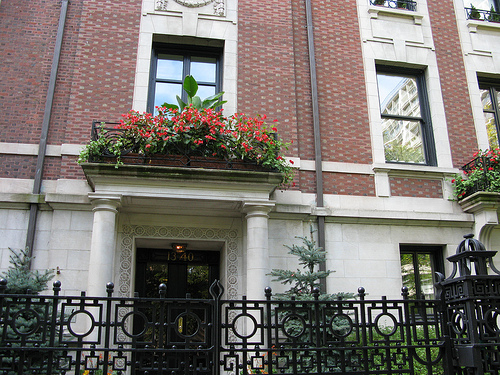 Coast comes from its proximity to Lake Michigan; gold, from the way the existing community perceived all the rich people who started settling there, following Potter Palmer (of the Palmer House)! Above is the former site of the Playboy mansion, which Hugh Heffner later donated to the Art Institute — crazy, right? even crazier is that the school turned it into a freshman dorm! — which was later sold and renovated into luxury condos. 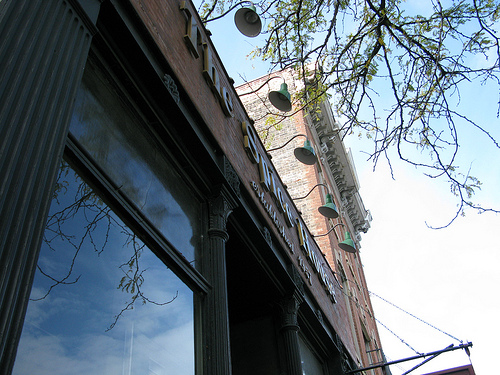 Walking into The Spice House is a completely inspiring experience. The owners are considered The Experts on all things spice (and not just in Chicago) but actually all the staff are experts — everyone there has been to culinary school and is passionate about food. 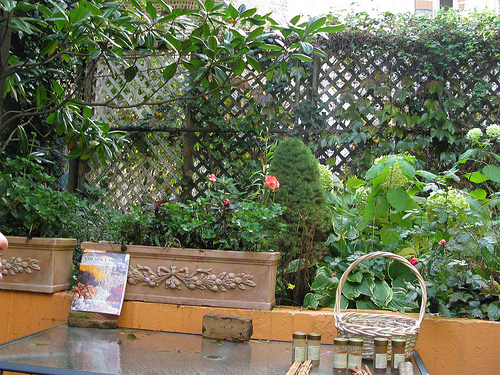 We went around back to an enclosed garden where Nicki explained the difference between white and black pepper (take off the outer shell of black peppercorns and white is underneath; as far as tastes, most people can’t tell the difference) and Indonesian and Ceylon cinnamon (when I go back, I am getting the Ceylon, which has a little kick and would be awesome in Christmas recipes). 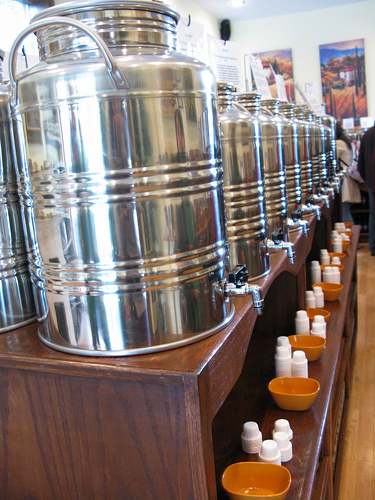 If you are ever in Old Town, please, right now, promise me you go here and sample a few of the extra virgin olive oils and amazing balsamic vinegars. You would not believe the variety, and I am telling you, I left dreaming of fresh peaches drizzled with the white peach balsamic or a leafy salad with the black currant balsamic and, mostly, an entire loaf of Italian bread, broken off piece by piece and eaten with the garlic olive oil, which was basically my dream come true, as loaded with garlic as it gets, baby. 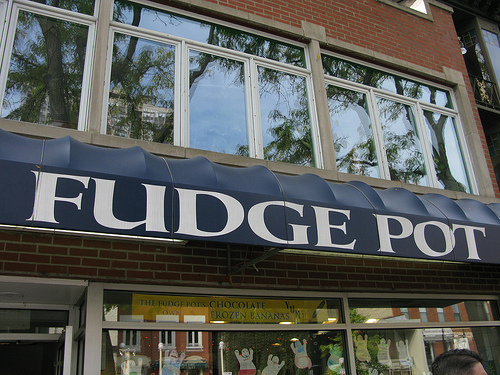 The incredibly kind people at The Fudge Pot (1532 North Wells Street) gave us three helpings of toffee while we watched a demonstration on making Sweetest Day chocolate pops, and I was standing right next to trays of fresh truffles, so you can imagine how much fun that was. At Catering | Chocolate (1712 North Wells Street), the menu is always changing — what’s available in the shop depends on what catering orders they have, as they make extras to sell there. 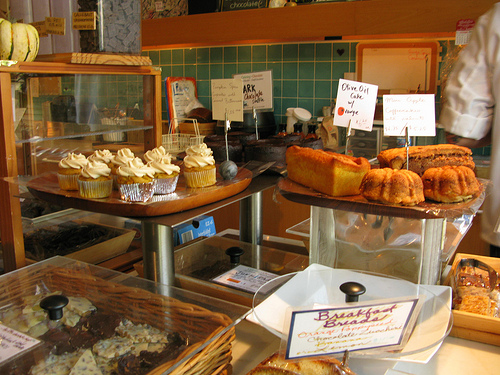 They say the catering is for us, but the chocolate is what they do for them because they love it so much, and there’s a little sign that says “Eat chocolate and cheese every day,” which I will be happy to obey. We ate Wisconsin gouda and delicious hummus on toasts, and, just between us, I may have had three helpings of the hummus because it was that good. 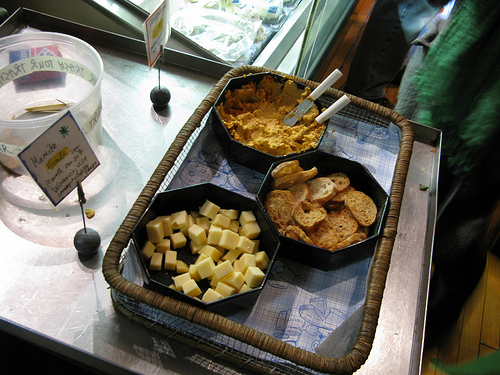 Our final stop would be for Chicago-style pizza in Lincoln Park, and it was nice to have to walk a ways to get there, especially after all we’d been eating. Nicki stopped us in Oz Park, which, honestly, I have seen a dozen times and never thought twice about, and she explained how Lincoln Park used to be considered a sub-standard area and Chicago actually put money into renovating it and made land cheap to draw people towards it.

How times have changed! Also, now I know the park gets its name in honor of Lyman Frank Baum, author of The Wonderful Wizard of Oz, who lived seven blocks from here. 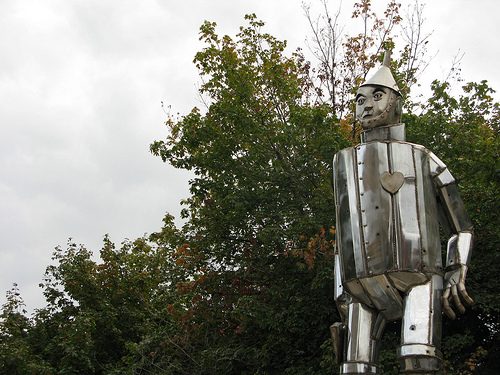 And anyway, while Nicki was talking about the Cowardly Lion statue, Caitlin elbowed me and pointed down at this. AB/CK, whoever you are, I think you’re lovely. 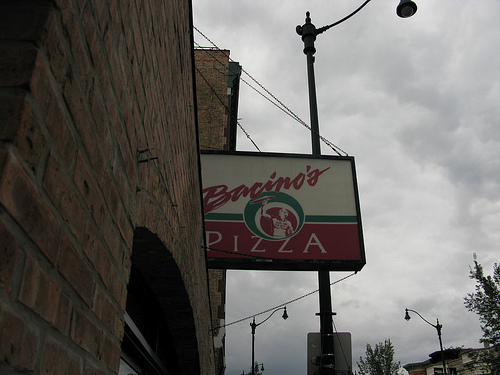 Bacino’s doesn’t franchise; they have four locations in the Chicago area, all controlled and managed so that you’ll get the same quality at each. Whatever they’re doing, something’s working: Charlie Trotter says they’re the best. 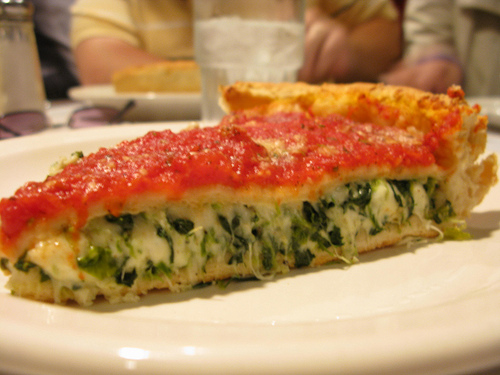 They gave us heart-healthy spinach pizza — I mean, that is what they called it — made with a lower-moisture mozzarella and fresh spinach and actually recognized by the Chicago Heart Association, if you can believe that, as being healthier. If they hadn’t told me that, I’d never have guessed (in fact, I’m still skeptical!), and after this last stop, we wandered upstairs and Nicki took our picture and gave us hugs before we left, finishing a wonderful day exploring the city I’ve always known.

You know, in one of my favorite books, Alain de Botton writes that a traveling mindset relates not to geography but to receptivity. “We approach new places with humility. We carry with us no rigid ideas about what is or is not interesting. 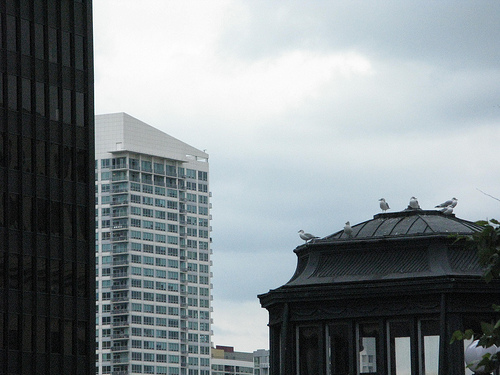 We irritate locals because we stand in traffic islands and narrow streets and admire what they take to be unremarkable small details … We are alive to the layers of history beneath the present and take notes and photographs.”

What was so fantastic about this food tour, beyond getting to do it with some of my favorite food bloggers, was getting to see the city through new eyes, learning things I never knew before, stepping into shops I would have passed by. That was a Saturday worth having and one I am thankful we were given, and that is a Saturday you can have anywhere — on vacation far away or, in your own backyard.

17 thoughts on “Chicago Food Tour: Near North Side”