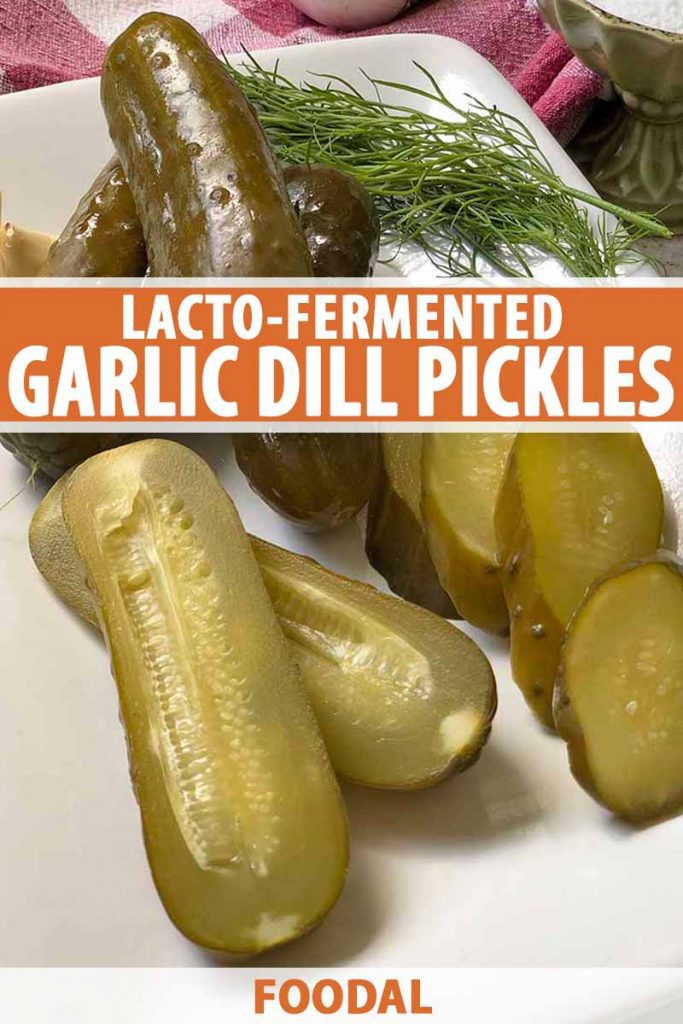 If pickles are a party in your mouth, fermented cucumbers are a fiesta in a jar.

Until they wind up in your mouth. 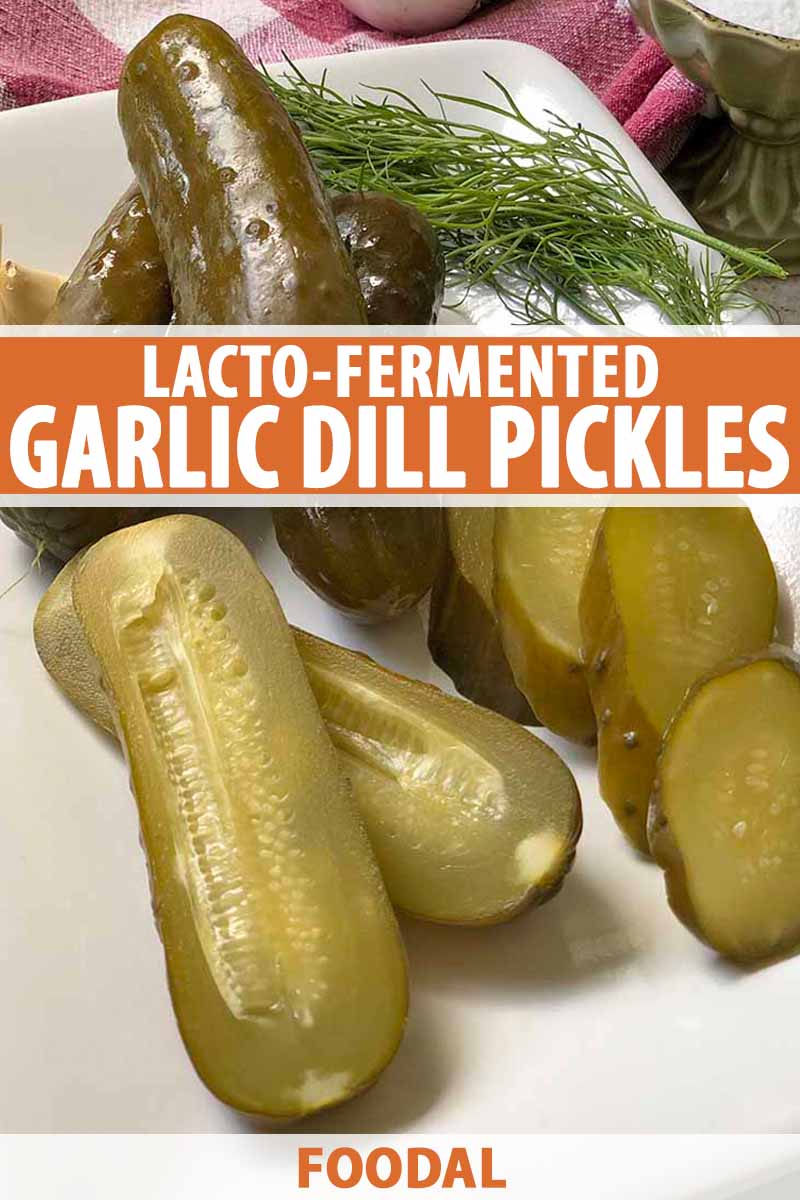 I’ve just recently embarked upon a journey into the lucrative world of lacto-fermented vegetables. Up until this point, my homemade pickles have always been prepared with vinegar.

If you’re in the same boat, I invite you to take my hand and dive headfirst into natural fermentation.

Wait. Let me wash the garlic off my fingers first.

A few words on fermentation…

After successfully producing a delicious, perfect batch of lacto-fermented pickles, I am still in no way an expert on the topic.

I bet you thought I was going to take that in another direction. 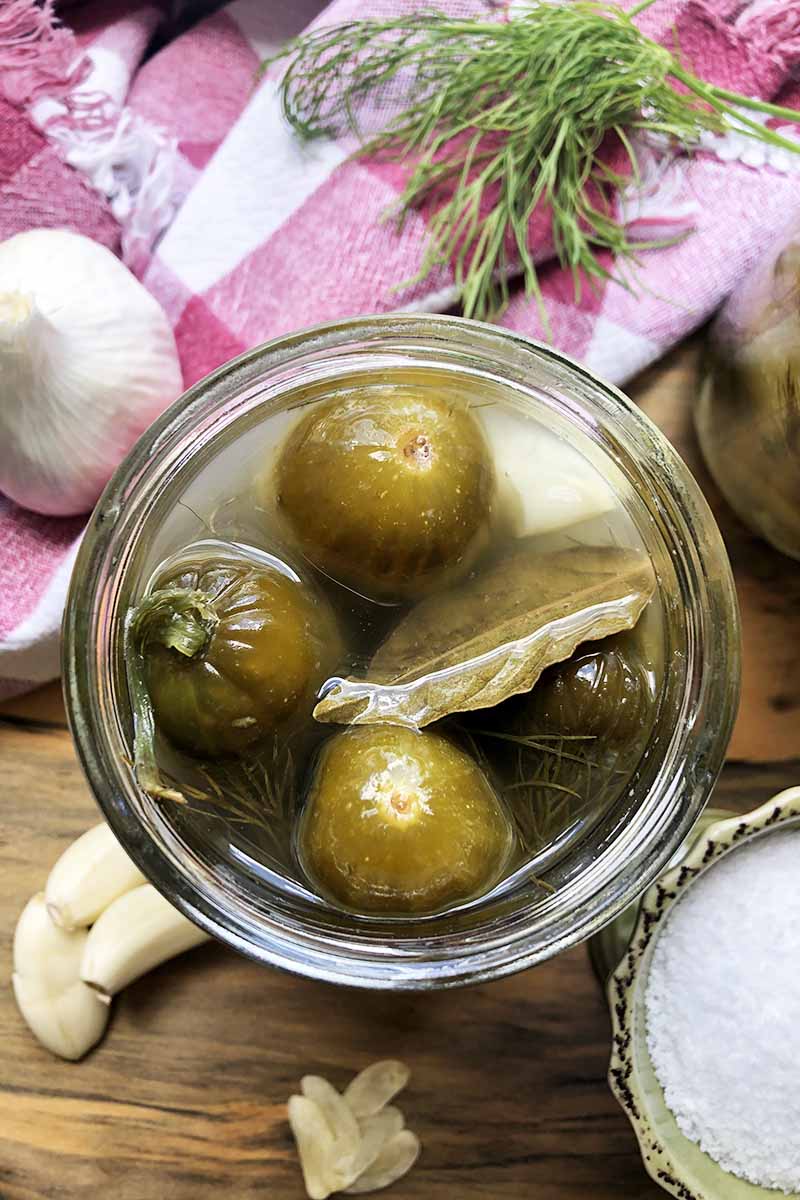 Though fermentation isn’t a complicated process, it’s wildly interesting and filled with many twists and turns along the way. Thankfully, it takes up to a week to make this particular recipe, which means I had seven days to research the topic and learn more.

I also wanted to make sure that I hadn’t just created a condiment that would grow into a salty monster and eat me.

Wait until you pour a little salt and water over a vegetable, only to come back to it several days later to find it vigorously bubbling away as if someone had plugged it in. 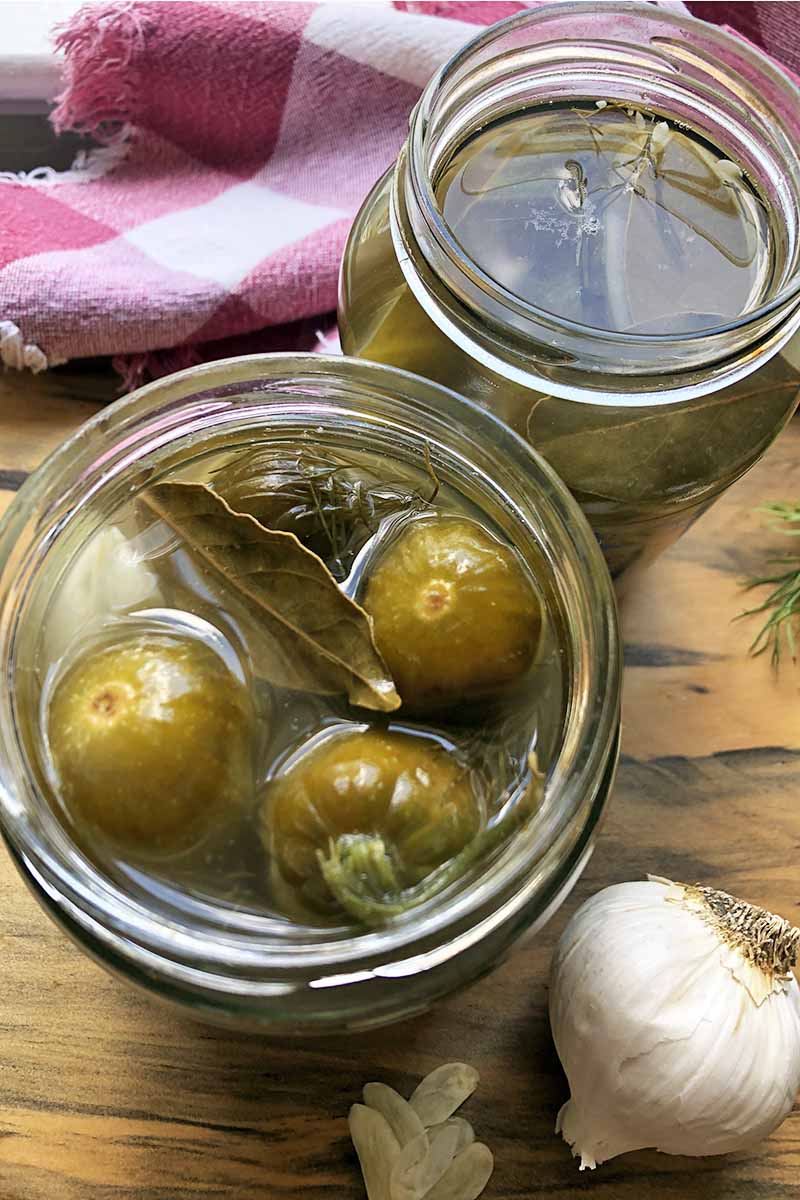 The classic vinegar method I’m familiar with isn’t the only route to righteous pickles. In fact, the heat used (when you boil the vinegar, water, salt, and sugar brine) actually reduces the vitamin content of the veggie. These are what’s commonly called “refrigerator pickles.”

With a natural salt brine, you get beneficial probiotic bacteria that increases the vitamin and enzyme content of the veggies, making them good for your gut. 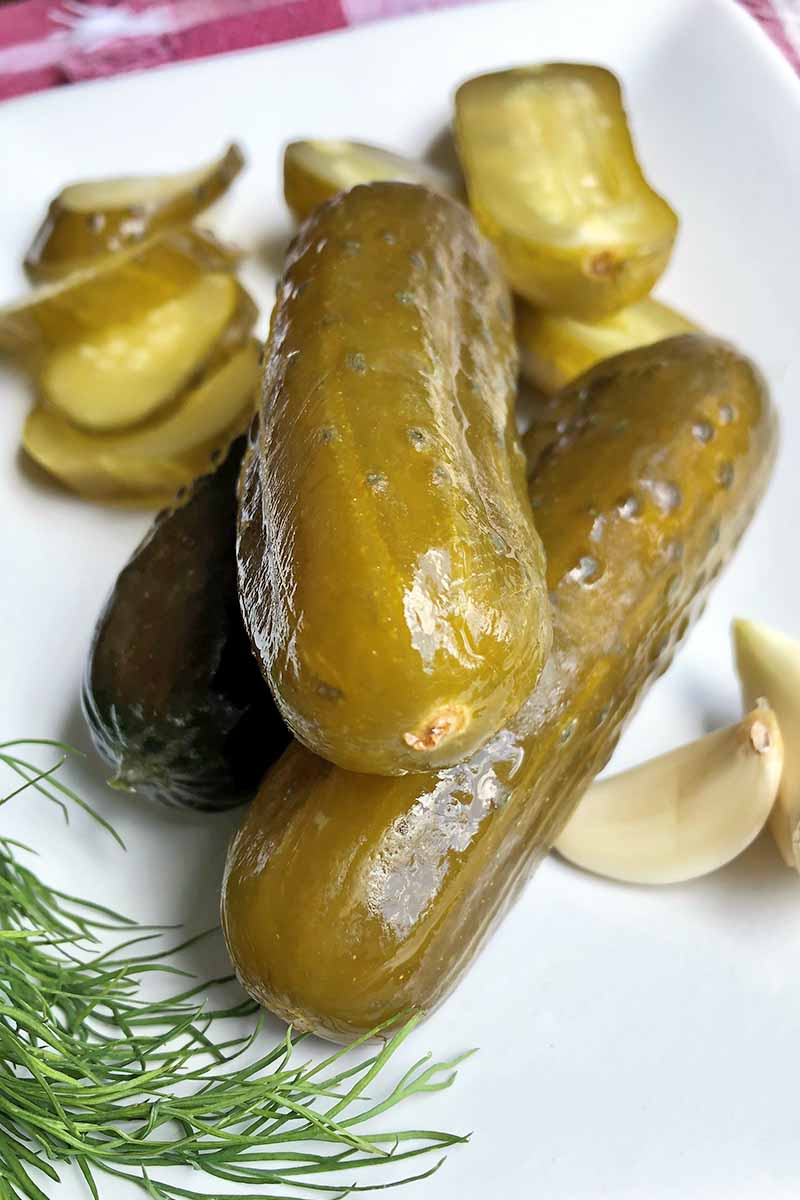 One of the most rewarding parts of making these pickles at home was witnessing their metamorphosis. And I’m not just talking about when they go from vibrant verdant green to a deliciously dull olive. As those beneficial bacteria eat the cucumber’s sugars, lactic acid is released.

That’s the gentle sizzle and pop you hear (and bubbles you see). All of this turns the salt water into an acidic solution, and tada! Lacto-fermentation.

You can even try your hand at making a homemade salsa using this process!

I was always a straight-D student when it came to chemistry, but if my teacher had pulled out jars of pickles and salsa at the beginning of class, my report card might have looked a little different.

I could have become a famous chemist and solved all the world’s most scientific complications!

Eh, who am I kidding? I would have eaten the snacks and gone back to doodling… 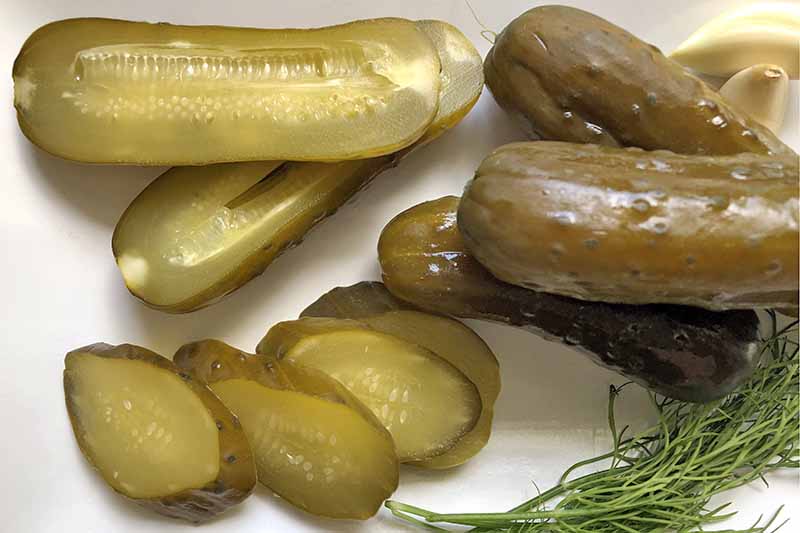 These homemade pickles are an addictive punch in the mouth of sour, salty, and garlicky goodness. They’re as crisp as can be, and grassy and fresh from the dill. It’s impossible to write about them without leaving my computer to head to the fridge for a quick snack.

And best of all?

With just a few ingredients, I got to watch plain old cucumbers transform into phenomenal pickles.

They grow up so fast.

Craving a briny snap? Make a batch of old-fashioned lacto-fermented pickles. They’re crisp, garlicky, and sensationally sour. Get the recipe now on Foodal.

Nutritional information is approximate and includes sodium content of the brine.

Step 1 – Scrub and Prep the Cucumbers

First, gather and measure out all of your ingredients and a couple of quart-sized jars. 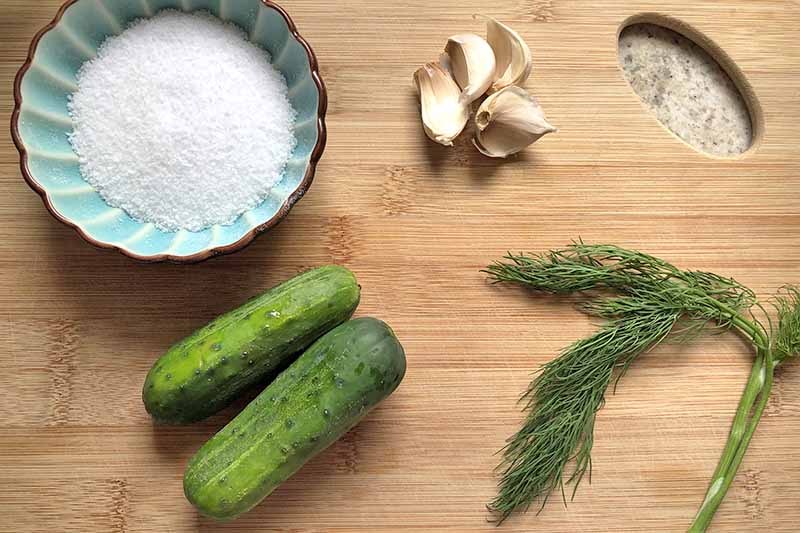 Thoroughly wash and the cucumbers under cool water and scrub them gently with a vegetable brush. 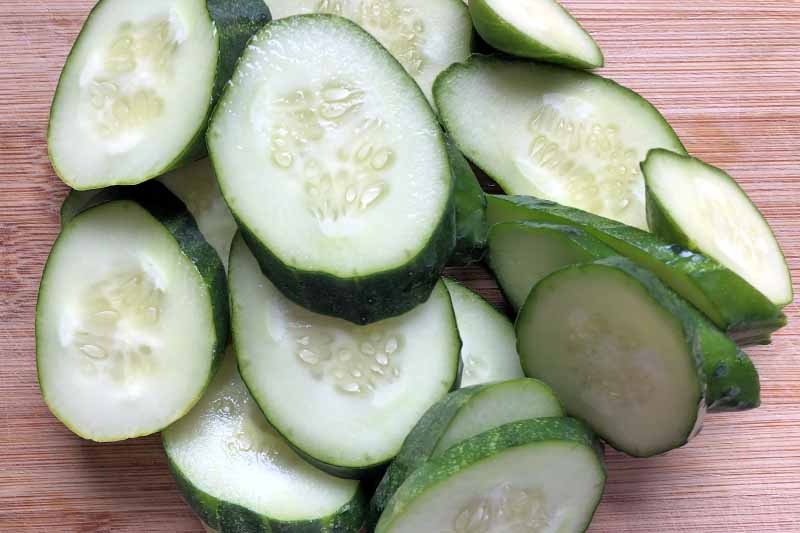 If you want to make pickle chips, slice them into 1/4-inch-thick rounds and place them in a separate container since they will ferment at a different rate than the whole ones. Otherwise, keep them all whole or slice them in half.

In a large bowl, dissolve the salt into the water. Make sure to use an iodine-free salt like sea salt (rather than iodized table salt), and filtered water that doesn’t contain any chlorine like tap water often does.

Smash the garlic cloves with the side of a heavy knife, to release their flavor and allow them to easily slide out of their shells.

Divide the dill, bay leaves, and garlic among the two jars. 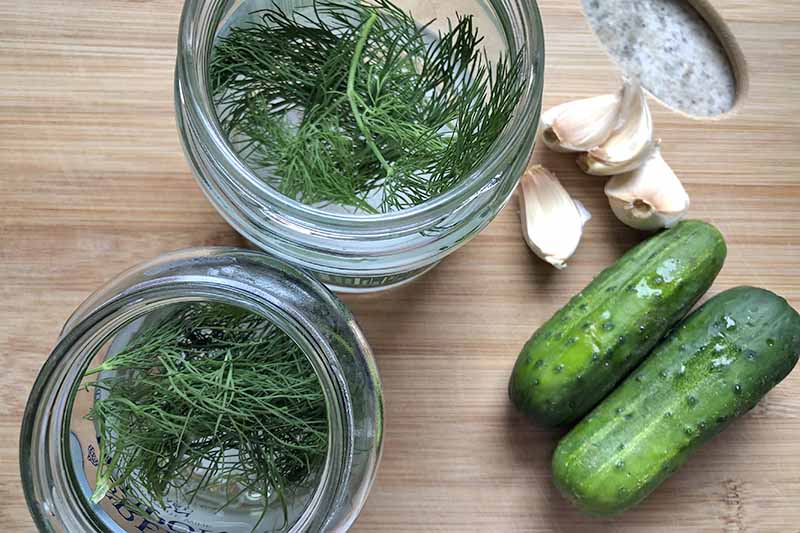 The bay leaves will add flavor, and they also contain tannins, which give you a crisp, crunchy pickle. You can also use grape leaves, oak leaves, horseradish leaves, or a tea bag. The tannins in these ingredients prevent the cucumbers from breaking down and becoming mushy.

If you don’t have mason jars, you can use any type of jar with a tight-fitting lid, like a store-bought pickle jar or a large mustard container. This a great way to reuse those empty glass jars before you recycle them!

To the jars, add in as many cucumbers as you can that fit comfortably. You don’t want them to be overly squished, but you also want them to be snug enough that they don’t float to the top. 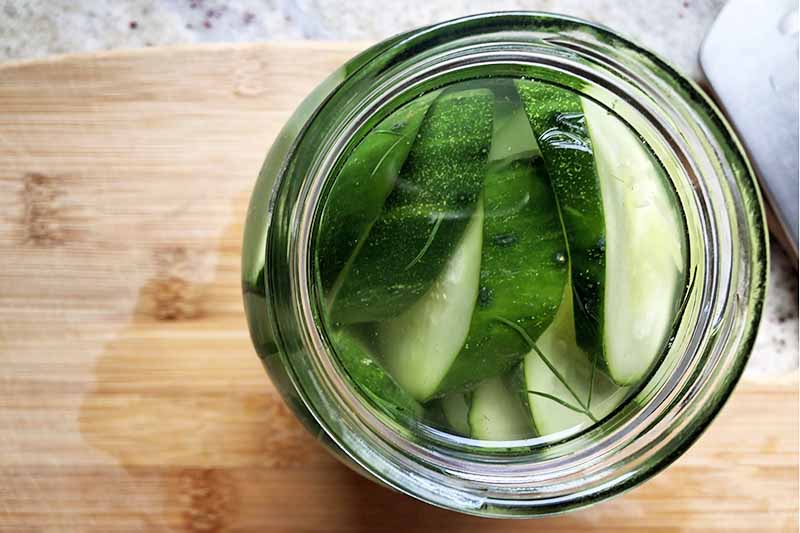 Pouring slowly, fill the jars with the salt water, leaving 1 inch of room at the top. 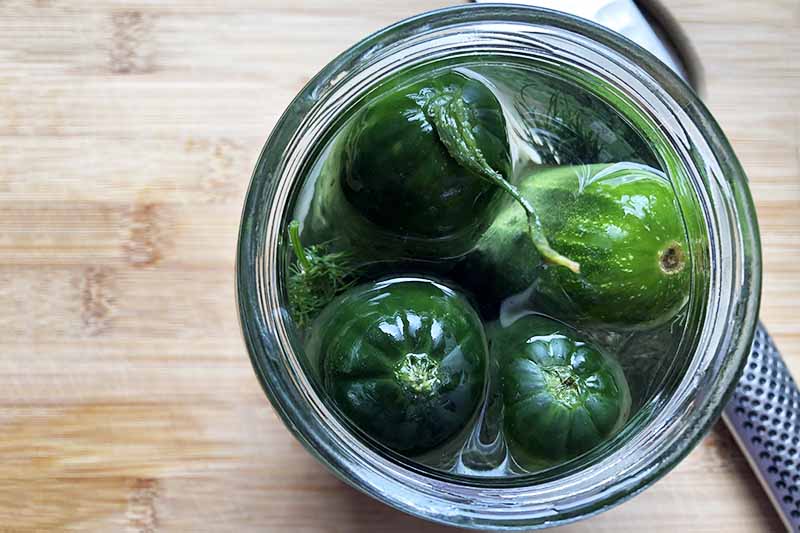 Make sure the cucumbers are fully submerged in the brine. If you need to weigh them down, use fermentation weights, soapstone whiskey rocks, or a heavier vegetable end like a fennel bulb. 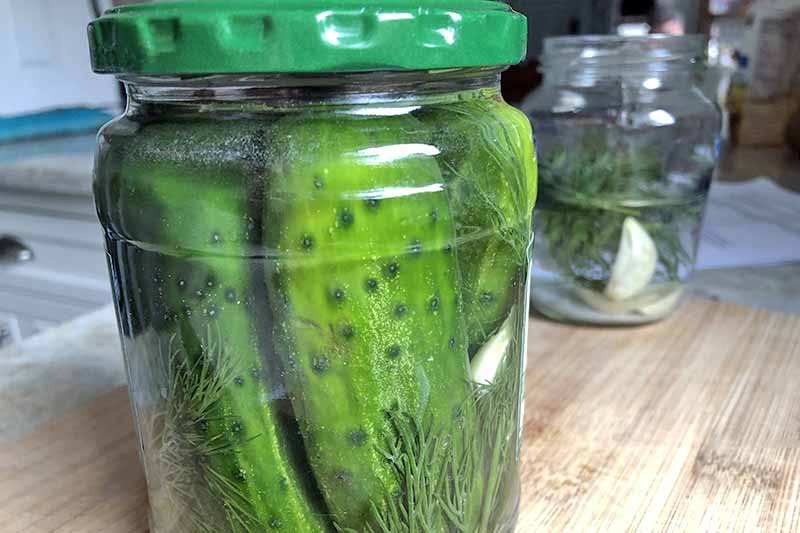 Jiggle the jars to remove any air bubbles before sealing them.

Step 5 – Screw on the Lids and Begin the Fermentation Process

Tightly screw on the lids, and allow the cucumbers to ferment at room temperature for 5-7 days.

Carefully (but quickly) unscrew and reseal the lids every day or two, to accomplish a quick release of some of the carbon dioxide that has been produced by the bacteria doing the fermenting. 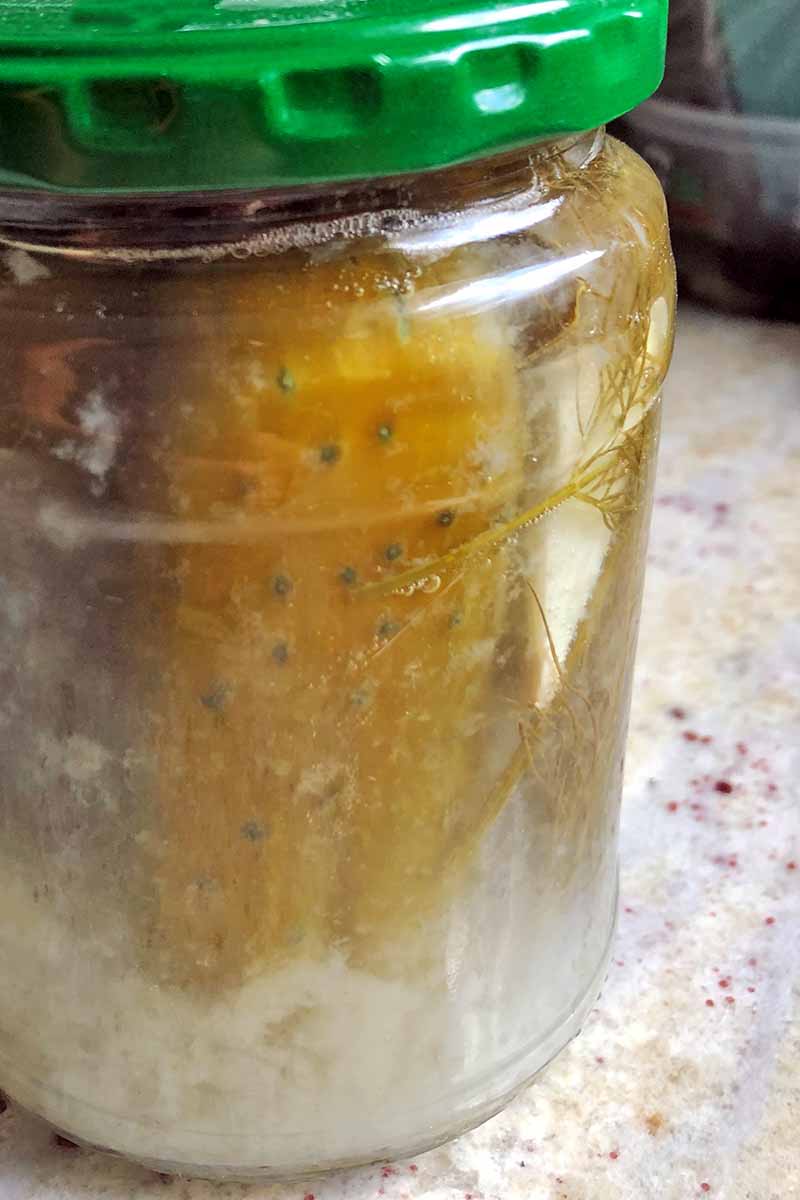 This is called “burping” the jars. If your fermentation is bubbling vigorously, you can burp the jars up to twice a day.

While the cucumbers ferment, you’ll notice some bubbling and clouding. This is completely normal – it means the bacteria is doing its job.

Once the bubbling in the jars subsides, this means that the fermentation has slowed down.

At this point, you can observe and even taste the pickles to see if they’re tangy and sour to your liking.

If you notice a pinkish or brown discoloration, mold, fuzz, a slimy appearance, or rotten smell, the fermentation has gone bad and you should discard the pickles. 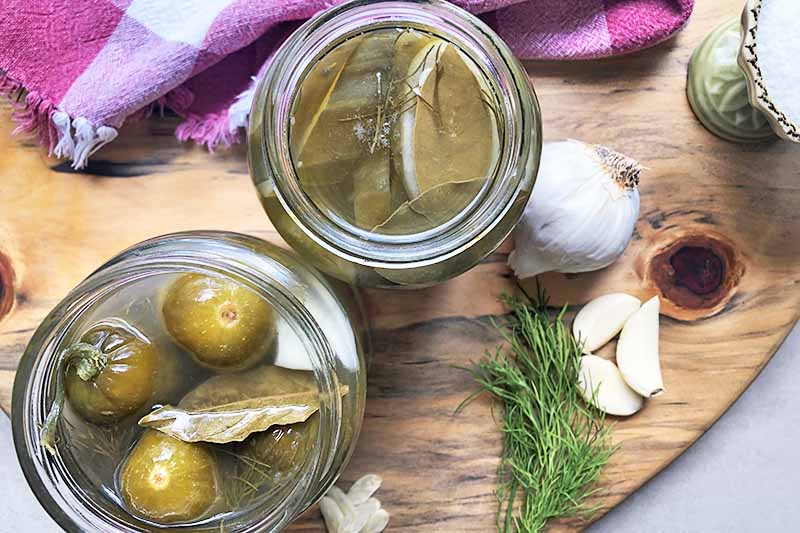 If the bubbling has stopped and the pickles look good, but aren’t as fermented as you would like them to be, leave them at room temperature for several more days and re-test.

If they appear to be fully fermented, but don’t taste as tangy as you were hoping, start over again with a new batch.

Once the pickles are fermented to your liking, transfer the jars the fridge. This will stop the fermentation process.

The pickles will keep for up to 2 months, but will lose some of their crispness over time, particularly if they’re sliced into chips.

I don’t know what it is about biting into a crisp, cool, salty-sour pickle that makes me want to fly into a frenzy of fermentation.

Now that I’ve stumbled into the world of natural salt brining, my mind (and jars) are brimming with possibilities.

From fermented beets to cabbage to squash, I’m seconds away from seeing if I can pickle my husband. 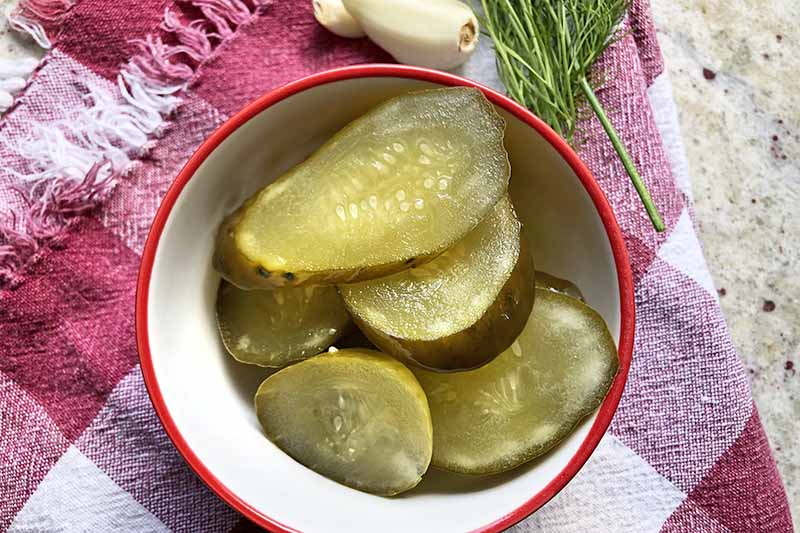 Become a fermentation fanatic with these gut-soothing recipes:

Are you familiar with fermenting? Share your finest success stories in the comments below! And don’t forget to give this recipe a five-star rating if you loved it. 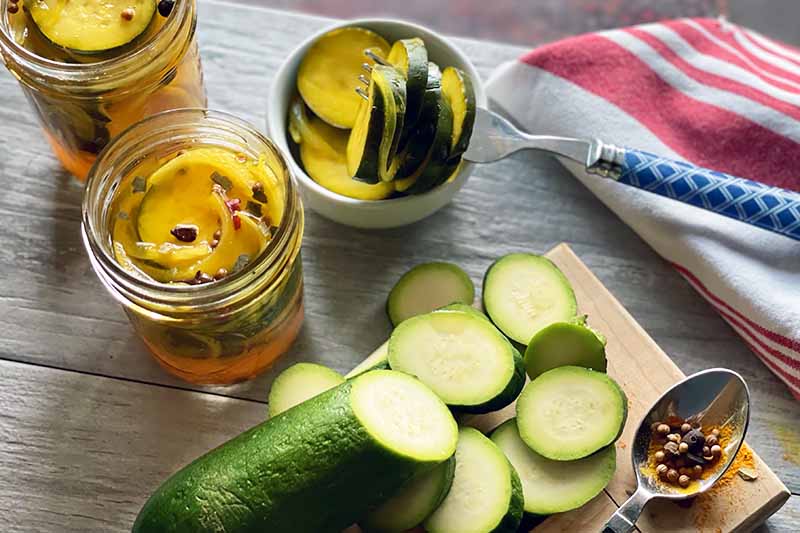 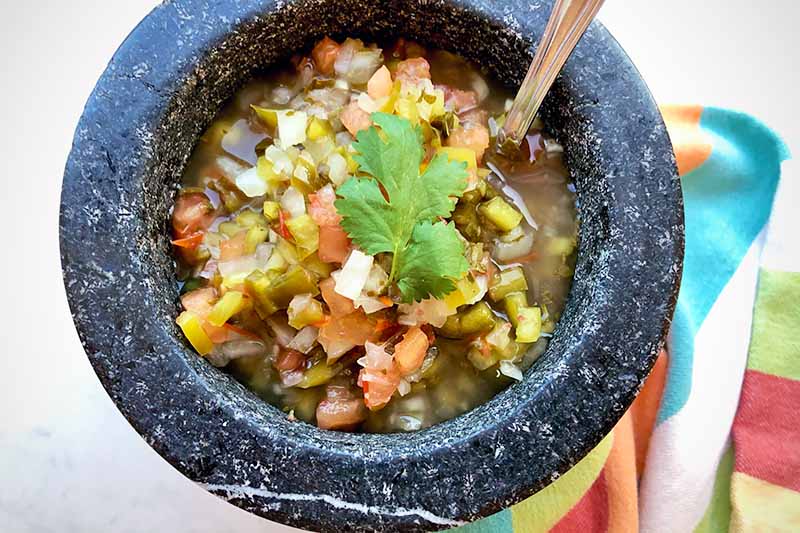