Every time we drive home to Ohio or Chicago, we make a pit stop in Louisville—but it wasn’t until Tim’s birthday that a stop became a visit. Arriving Thursday afternoon and leaving Saturday night, here’s what we did with just over 48 hours in the city that everybody’s talking about. 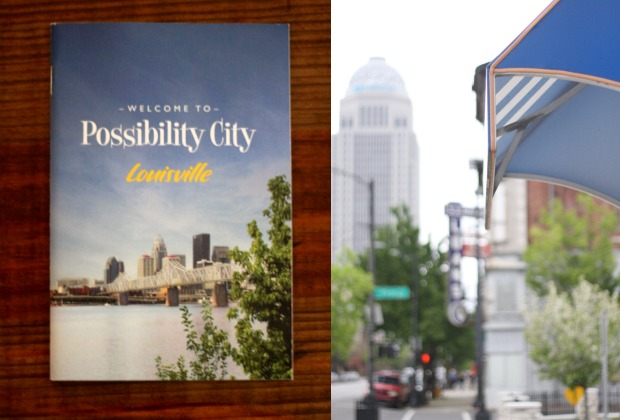 We lost an hour while we drove the short 150 miles into Louisville—while Nashville’s right on the eastern edge of the Central Time Zone, Louisville’s right on the western edge of East Coast time–so our 5:15 p.m. turned into just after 6 o’clock, but this city known for the Derby and its “greatest two minutes in sports” made up for the time with something better: more daylight than we’ve seen since last year. While we checked into our cottage at the Inn at Woodhaven, indulged on pizza at Coal’s, drove through charming neighborhoods and ran to the store, the sun shined strong as summer, with daylight until almost 9 p.m. 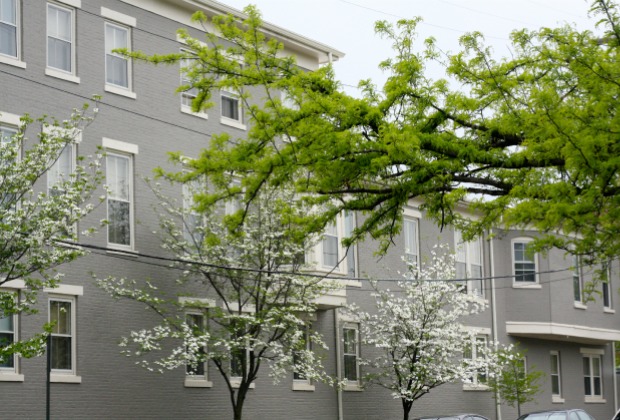 We spent Thursday night in the Rose Cottage at Woodhaven, a storybook setting if ever there were one. The inn is listed on the National Register of Historic Places and is a county landmark. It is also, easily, the nicest bed and breakfast at which either of us has ever stayed. The main building and the carriage house on the property were built in 1853 and showcase tall ceilings, floor-to-ceiling paned windows, enormous arched doors and the kind of charm that takes your breath away. 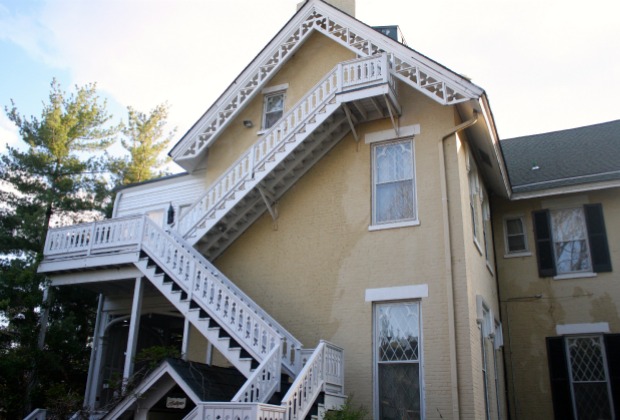 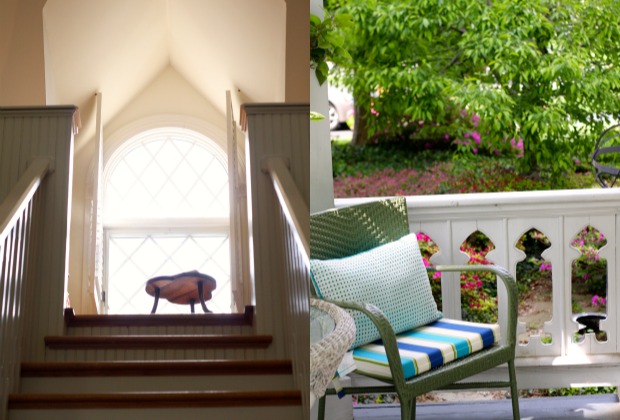 Our cottage, which was built in 1998 using similar architectural details, was completely private with its own porch, sitting area with a fireplace, bathroom with a soaking tub and a steam shower, stairs leading to a reading nook and all those little, thoughtful touches people equate with cozy inns: magazines, music, fresh roses and even breakfast brought straight to your room in the morning at no extra charge.

The morning we left, I flipped through the guest book in our cottage and read comments from couples who’d stayed there on their wedding nights and anniversaries, businessmen who’d wanted a more comfortable retreat while they were in town for work, groups of women who’d come for girls’ weekends and retreats. It was a treat in every sense of the word for us to get to stay there, and we’re so thankful for the chance. 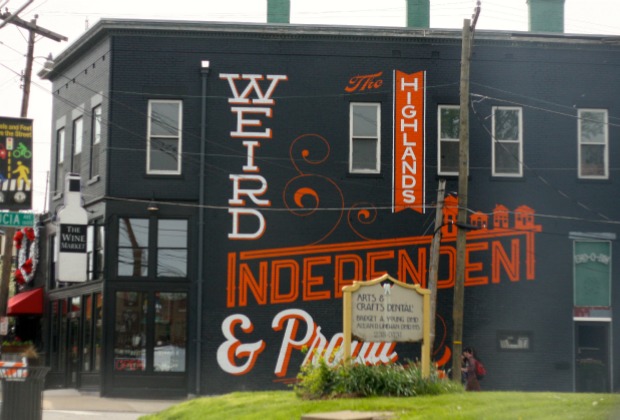 On Friday, we set out to see more of the city. You wouldn’t expect it from a Midwestern-meets-Southern town with a consolidated population of under a million, but Louisville is kind of a big deal these days, an area of the country being featured everywhere from Zagat to Southern Living to the New York Times. When our friends Matt and Kasey shared tacos with us here in Nashville a few weeks ago, they’d just come from Louisville, explaining that it had recently been ranked as #1 U.S. destination for 2013 by Lonely Planet—and in an article where it’s suggested Louisville may be the “new Portland,” to boot. 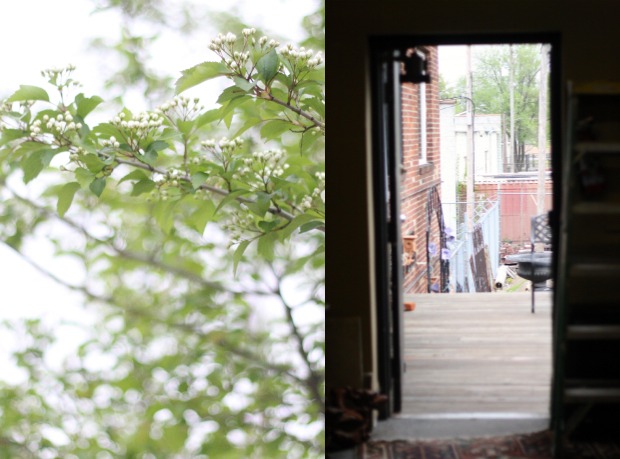 Louisville boasts the nation’s largest urban forest, the biggest neighborhood of historic Victorian homes and bragging rights for sourcing 1/3 of the entire world’s bourbon supply. It’s also a city that draws hip, trendy restaurants created by chefs and business owners passionate about using ingredients that are seasonal and locally sourced. (Just watch these videos from Rye for proof.) 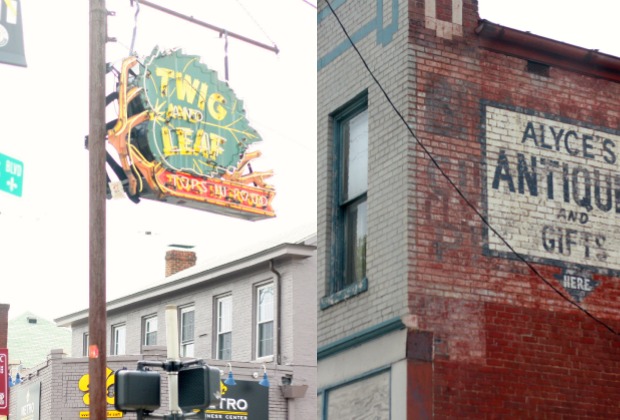 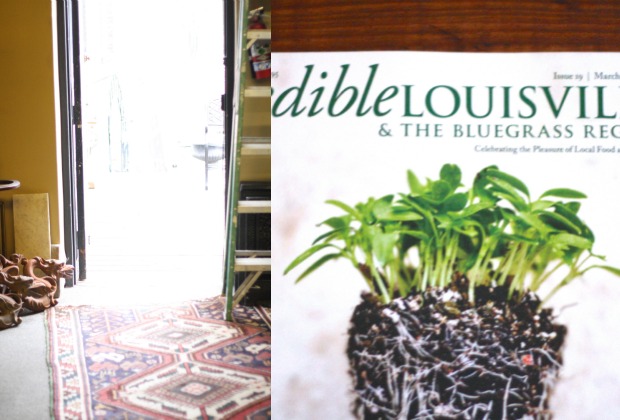 We ate lunch at Mayan Cafe, one of the many eateries located along Market Street, which is also called the East Market District or NuLu (i.e. for New Louisville), and now we’re already talking about ways to go back there next time we drive through town. Everything we ate, from the guacamole decorated with microgreens to the root vegetable salad and the dragonfruit salad to the swordfish tacos special, was beautifully executed and delicious. Like almost every restaurant we ate at, Mayan Cafe is big on local sourcing and posts all its farm partners online. 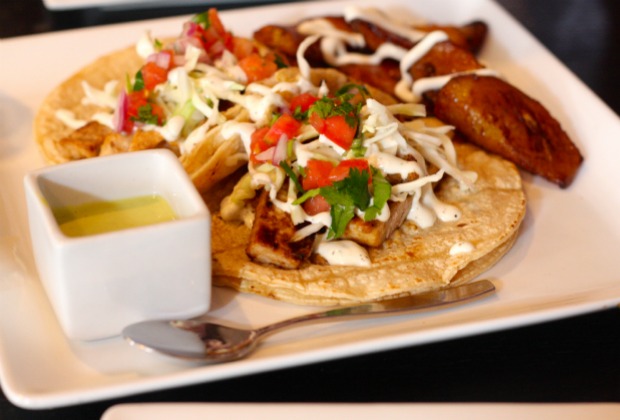 Also in the NuLu area, we ate Tim’s birthday dinner at Harvest, the one restaurant that almost everyone we talked with ahead of time had recommended, known for its regionally inspired menu. Harvest gets at least 80% of its food from farms and growers within 100 miles of Louisville, and it’s got the giant wall map posted with pins and profiles to prove it. We grabbed birthday treats from Cake Flour, an all-natural bakery that uses all organic flours and sugars, pastured eggs, European butter and no additives, ever. 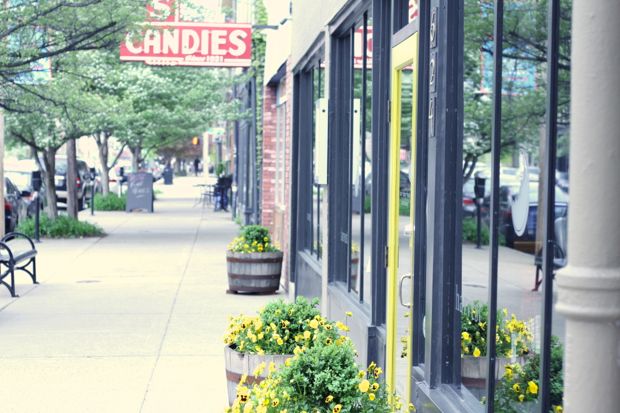 Our second night, we spent at the Louisville Marriott East, which was just built last year, and is the official hotel of the Kentucky Bourbon Trail. While a little off the beaten path, tucked inside an industrial park, this hotel was a short drive from everything else we wanted to see, from parks to shopping to more eats. 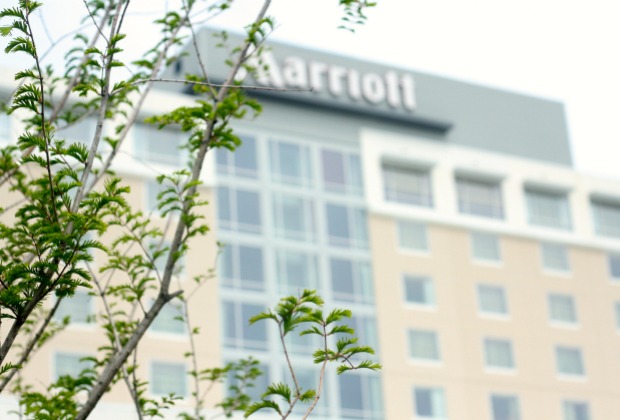 In the same way that we love visiting the Nashville Flea Market, we enjoyed checking out Architectural Salvage, 24,000 square feet and four full yards of salvaged furniture, hardware, windows, stained glass, lawn ornaments and more, nestled in the midst of downtown. The prices weren’t cheap, but there were some cool finds in the midst of the rooms and boxes, from Mexican tiles to stacks of oriental rugs. 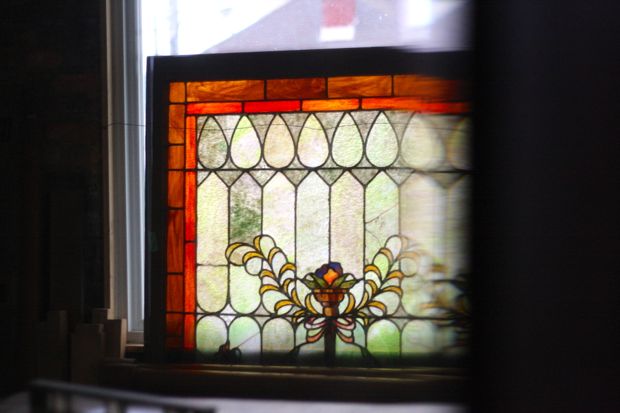 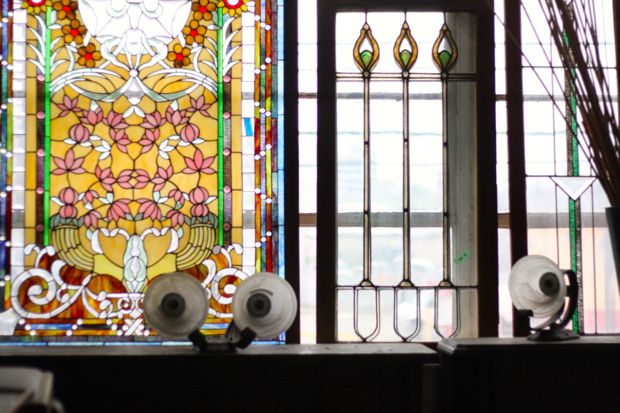 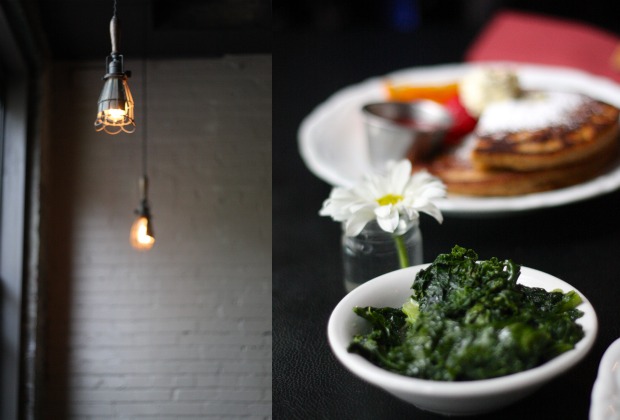 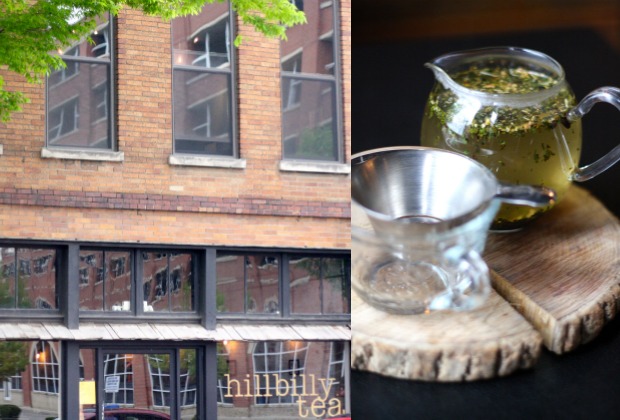 We feasted on a loaf of freshly baked cranberry walnut sourdough bread from Blue Dog Bakery and Cafe, where they sell out of bread by closing, so it’s smart to order ahead. 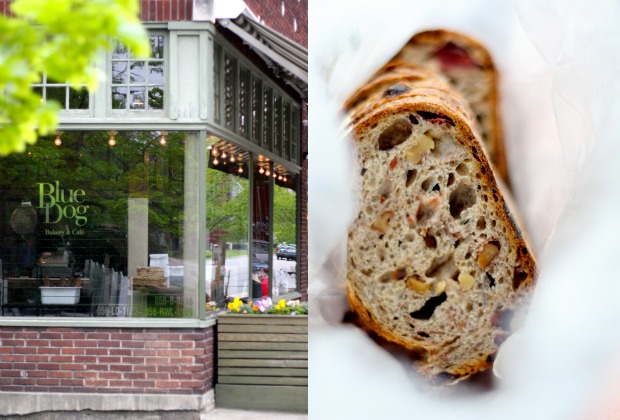 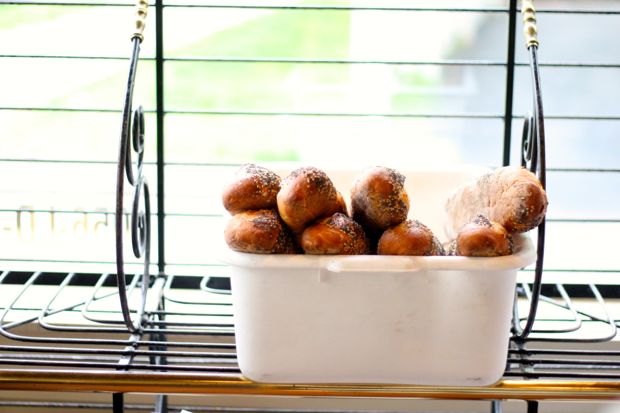 And we did a lot of driving (the long strip that is Bardstown Avenue/The Highlands feels, to me, a lot like Chicago’s Wicker Park), and we did a lot of walking (Cherokee Park is a wonderful place to spread out a blanket and relax), and we came away from Louisville feeling impressed with a city everyone’s saying we should be impressed about. It may be cool to like Louisville these days, but we can see why. 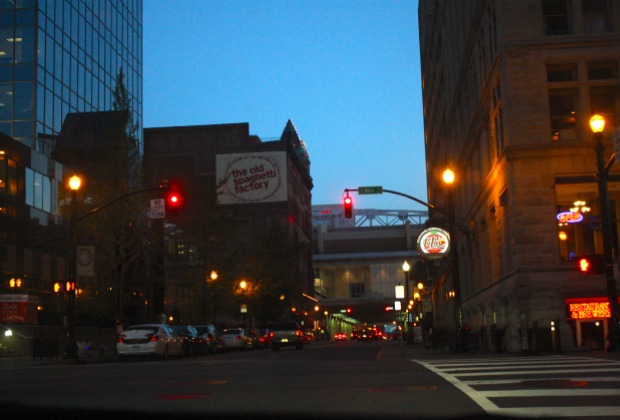 SUMMARY OF LOUISVILLE RECOMMENDATIONS
Special thanks to all of you on Facebook for your tips and recommendations; to Matt and Kasey for turning us on to the idea of Louisville and for this great roundup at Turntable Kitchen filled with tips; and to our friends Jonathan, Angela and Lan and Devin for telling us what you like.

It’s worthwhile to go visit:
Cherokee Park (to get outside)
Architectural Salvage (to find cool stuff for your house)
Old Louisville (to see Victorian architecture)
Churchill Downs (because you are in Louisville, after all)
Highlands (because it’s hip and trendy and there’s lots to see)

Also highly recommended to us, but we didn’t get to check out on this trip:
Proof
Garage Bar
Decca
Seviche

Pizza place Tim’s dying to try but which is only mobile right now:
Mozza Pi

**Special thanks to Inn at Woodhaven and Marriott Louisville East for discounted rates that made it possible for us to check out their accommodations and share them with you; special thanks also to Susan Dallas and the Louisville Kentucky Convention and Visitors Bureau for help in planning and arranging our trip.