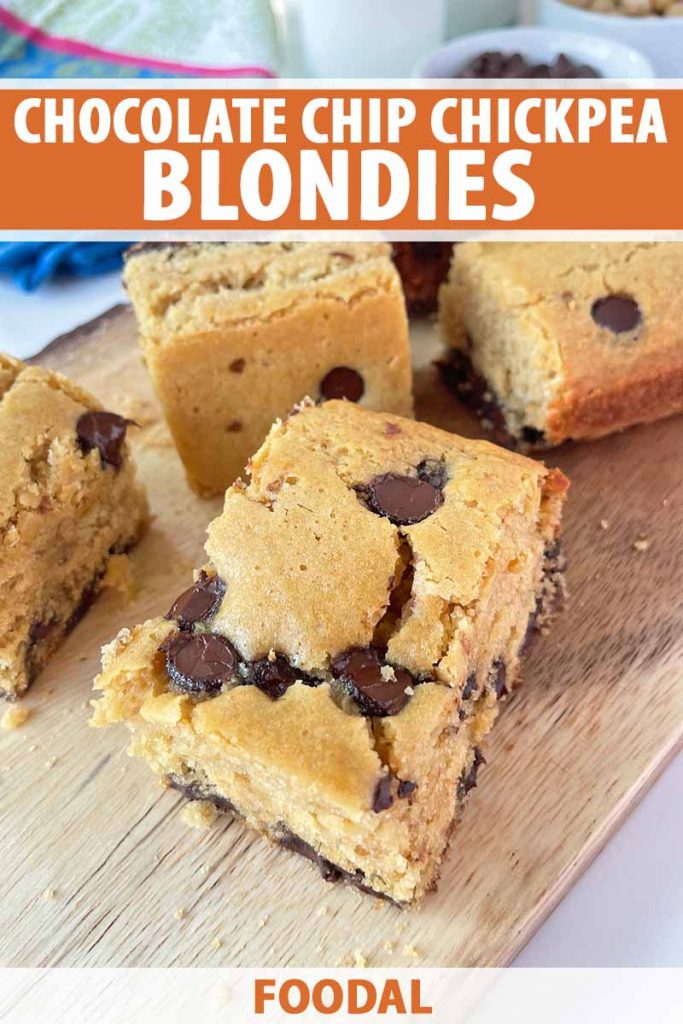 Full-circle moments are my favorite. And while I whipped up my most recent batch of these decadent chocolate chip blondies, it occurred to me that when I was brewing in my mom’s belly decades ago, she was also spatula-deep in gooey batter. 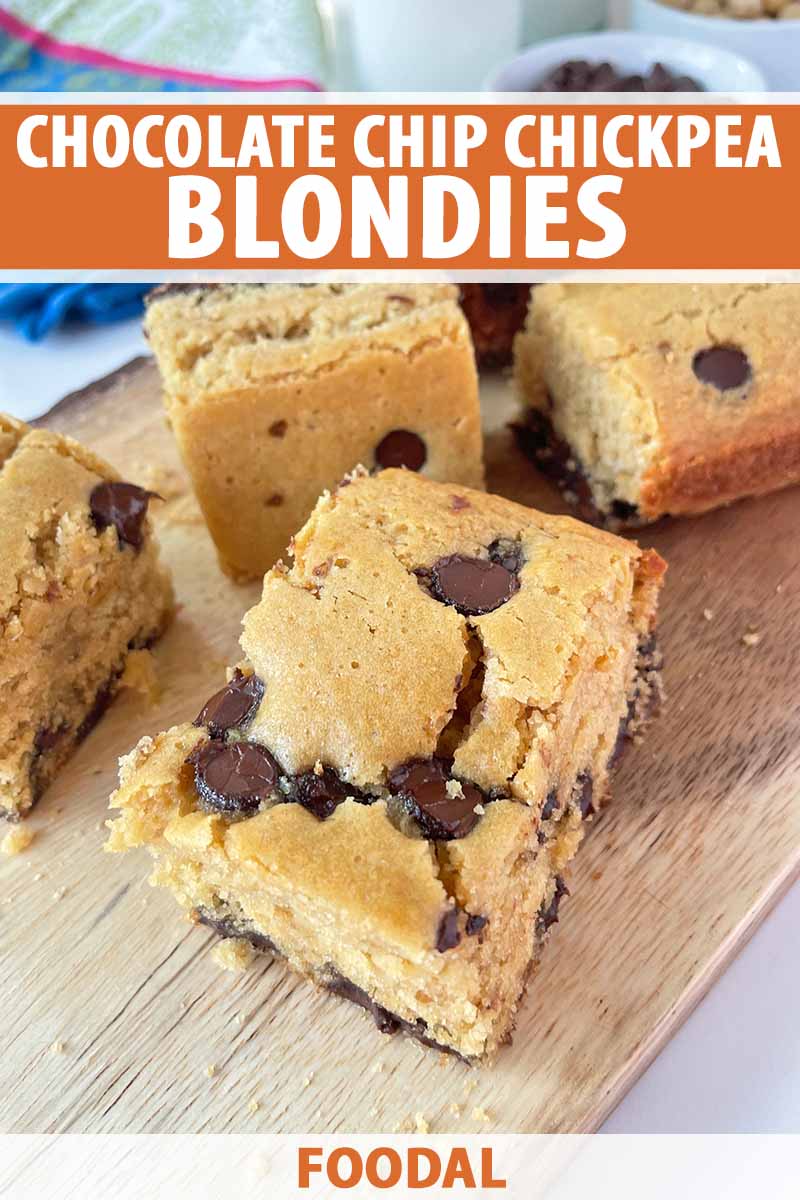 Just out of college in the summer of 1975, my mom began to bake and sell sinfully rich, double-chocolate brownies to gourmet stores in Philadelphia. Nine months later, her homemade masterpieces were declared “best in the city” by Philadelphia Magazine and became an overnight sensation.

Over the next few years – and with the help of my dad’s extraordinary marketing genius – the business achieved cult status. Rachel’s Brownies created a craze in Häagen-Dazs stores and gourmet shops across the country.

They were even ordered by Henry Fonda’s wife for his 75th birthday party.

But for me, these gooey, fudgy morsels were simply a part of our family. If that’s not legit brownie cred, I don’t know what is. 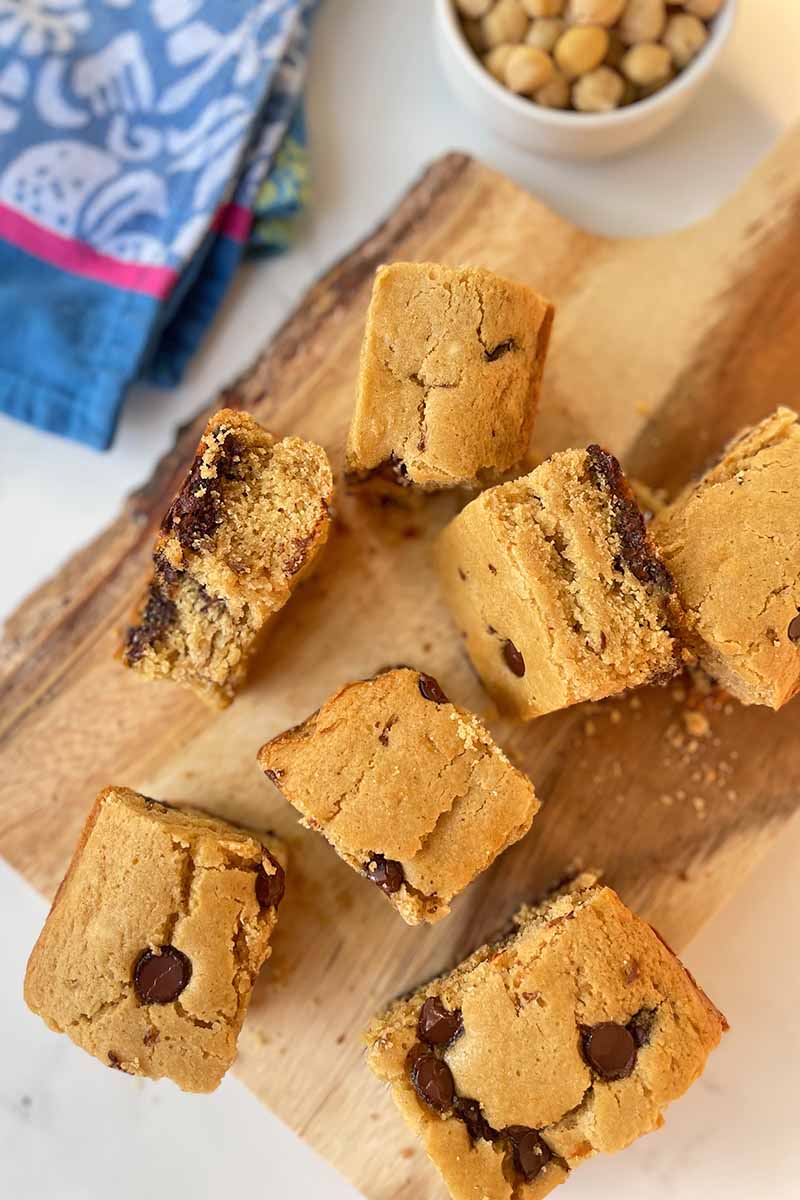 My dad’s take on the original recipe, dubbed “Rachel’s Husband’s Brownies,” was a butterscotch variation brimming with brown sugar, butter, and chocolate chips. To this day, they’re one of my only weaknesses as a non-sweet-tooth snacker.

And while these chickpea blondies are both vegan and gluten-free, as I watched the gleaming golden batter slide into my eight-by-eight baking pan, I couldn’t help but feel a bit nostalgic for that childhood dessert I revered.

Luckily, this recipe covers all the bases of my beloved butterscotch treats.

Instead of relying on loads of melted butter, eggs, and brown sugar, as typical blondies do, I call upon a few brilliant baking secrets to keep them within their dietary guidelines.

Coconut oil and applesauce keep the batter moist as can be. Coconut sugar is subbed in for standard brown sugar, which works like a charm as both boast rich notes of caramel. 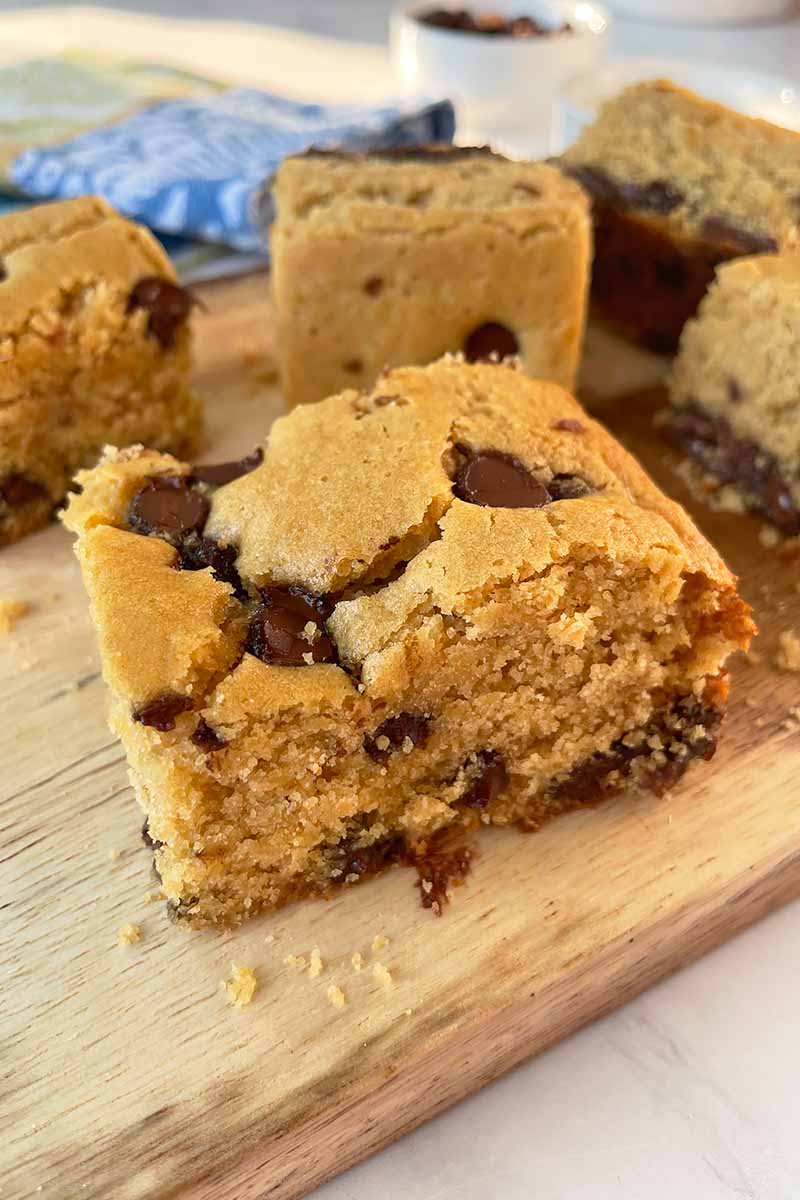 As far as the flours go, let’s get right into this chickpea chat. If you thought these legumes only had a home in hummus, boy were you wrong. They’ve become a baking sensation thanks to their versatile texture and nutrient-rich makeup.

Lots of recipes out there lean on canned chickpeas, but ours takes advantage of the garbanzo bean in its dried, ground state. Chickpea flour is high in the good stuff like protein and fiber, and low in carbs and calories.

Brown rice flour, different from white or sweet rice flour, also plays a starring role by lending its nutty flavor, as well as even more fiber and nutritional value. When used alongside other flours, it helps prevent a crumbly consistency – which can be a common problem when working with gluten-free flour, or chickpeas in any form.

Tapioca and arrowroot starch are crucial to many gluten-free recipes as they help to thicken the texture and add structure. They also impart a glossy sheen, which I promise you’ll recognize the minute the batter comes together. 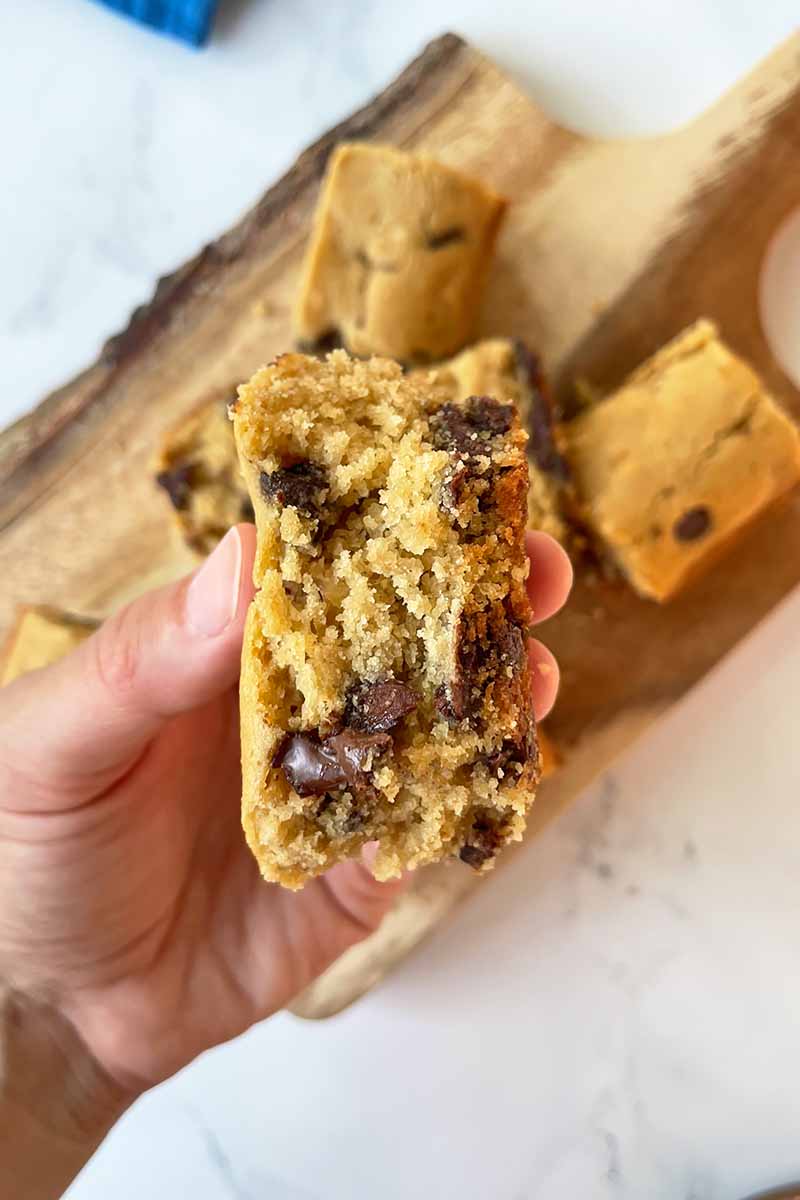 Other than measuring wisely and mastering the precise baking time, allowing the blondies to cool completely in the pan is another can’t-miss rule. This ensures that they’ll set properly rather than falling to pieces, and maintain their structure when sliced.

As for what to pair them with, I reach for an ice-cold glass of almond milk and give my mom a ring. Thanks to a wheat intolerance discovered later in life, she follows a gluten-free diet – so we can indulge in every bite of these blondies together.

Talk about full circle! Or square, in this case.

Studded with sweet chocolate chips, these moist chickpea blondies are a healthy, protein-packed dessert that will melt in your mouth.

Preheat the oven to 350˚F. Line an 8-by-8-inch square metal baking pan with parchment paper and coat lightly with non-stick oil spray. This is the best way to make sure none of the batter sticks to the pan and you can lift the blondies out easily before slicing. 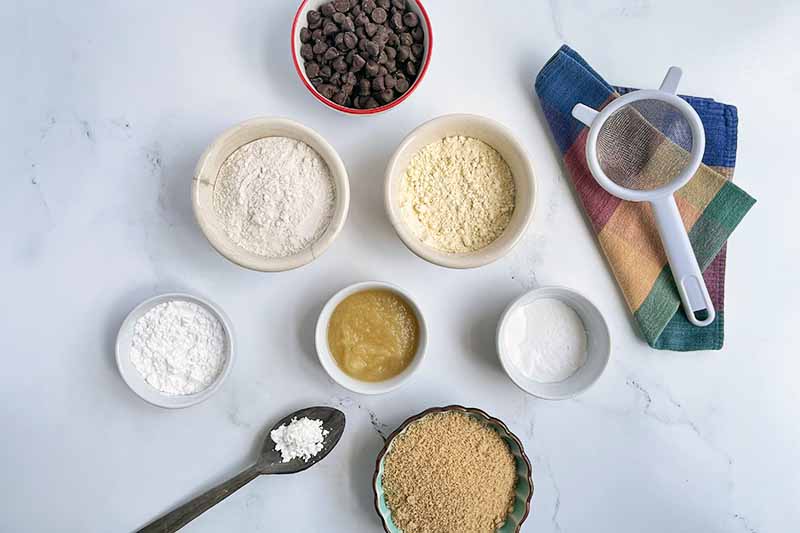 You may see arrowroot or tapioca starch labeled as flour or powder, and these terms are used interchangeably so you can choose whatever you have on hand.

If you’re having trouble finding coconut sugar at the store, you can always grab some online. My favorite is this organic option from Supernatural that’s available on Amazon in a 16-ounce bag. You can also substitute granulated sugar if you prefer.

You can buy a store-bought applesauce, or use our recipes for stovetop or pressure cooker applesauce. If you don’t want the cinnamon flavor in your blondies, you can omit the spices in the recipes.

In a small microwave-safe bowl, microwave the coconut oil on high until liquified, for about 30 to 45 seconds. Set aside to cool to room temperature.

Sift the baking powder and baking soda to remove any small clumps, making it easier to distribute the leavening more evenly into the batter. 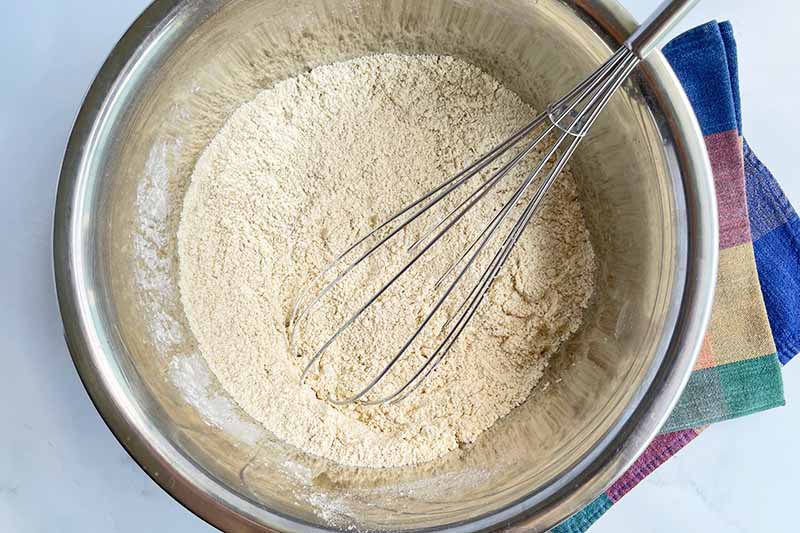 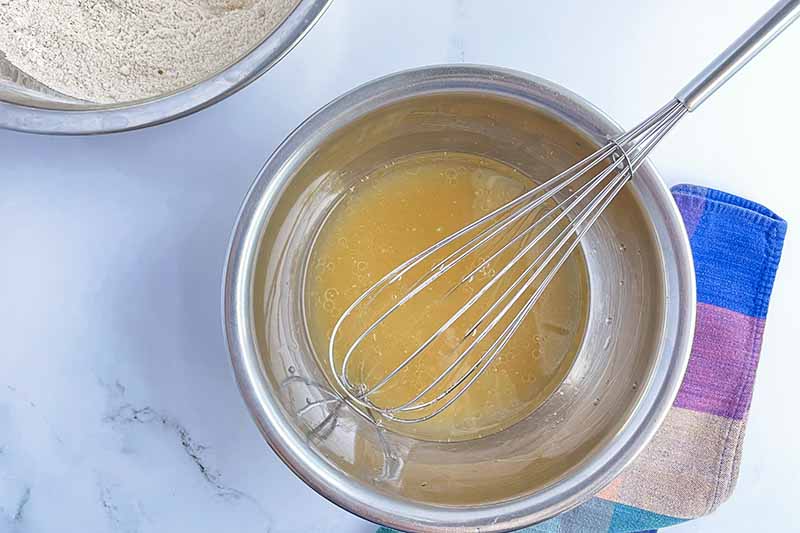 In a separate large mixing bowl, whisk the water, coconut oil, applesauce and vanilla extract together until thoroughly combined.

Working in about three batches to make sure the ingredients are combined well without overmixing, fold the dry ingredients into the wet. 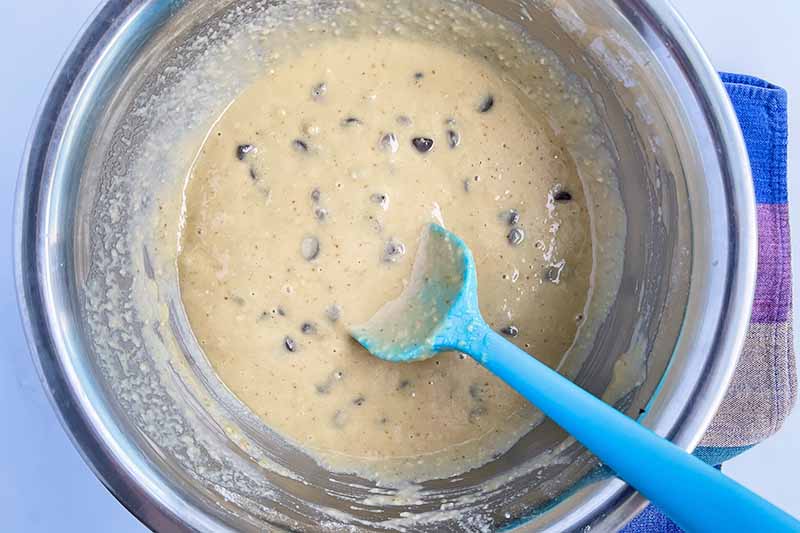 Fold in 3/4 cup of the chocolate chips. The batter will be very liquidy, but that’s okay – it bakes up beautifully.

Pour the batter into the prepared baking pan and use a rubber spatula to smooth it out and spread it to the edges of the parchment paper as best as you can. The corners of the paper can crinkle easily so you want to make sure the batter is flush against it.

You can also cut the parchment paper to size to prevent excessive crinkling. 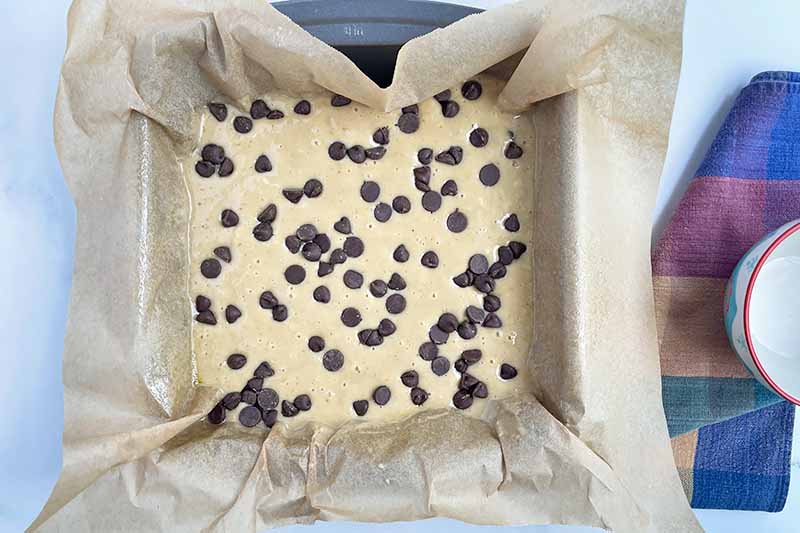 Sprinkle with the remaining chocolate chips.

Bake the blondies until puffy, light golden brown, and mostly set, for about 25 to 30 minutes. 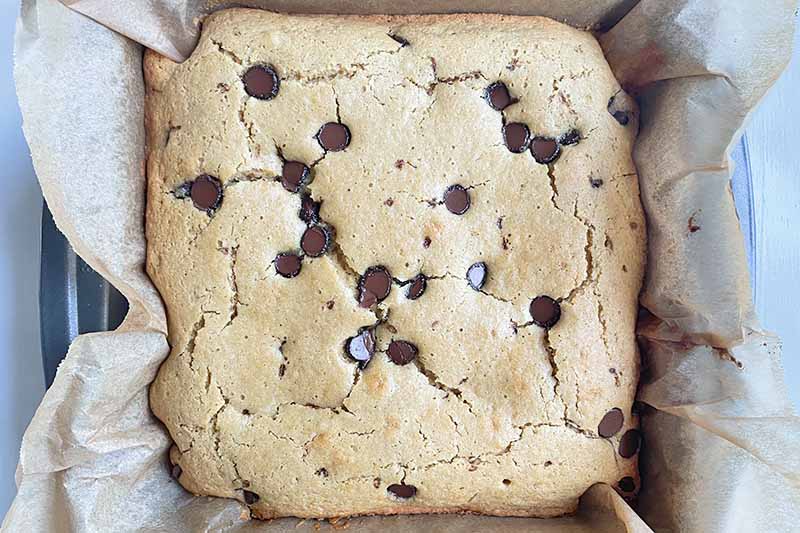 You want them to be moist in the middle and not overly cakey, so a toothpick should come out mostly clean but with a few crumbs attached when you test it.

Allow the blondies to cool completely in the pan for about 30 minutes before lifting them out in the parchment paper and then slicing into even squares. 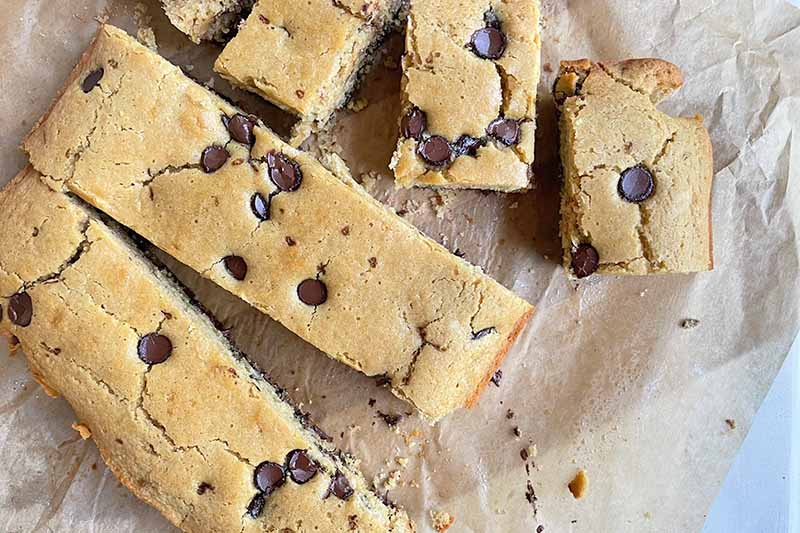 To speed up the process, you can cool them to room temperature, then transfer to the fridge to chill.

Store in an airtight container in the refrigerator for 3 to 5 days.

If you thought the only way to achieve a lush, moisture-rich consistency in chickpea blondies was to use whole chickpeas, this recipe will prove you wrong. 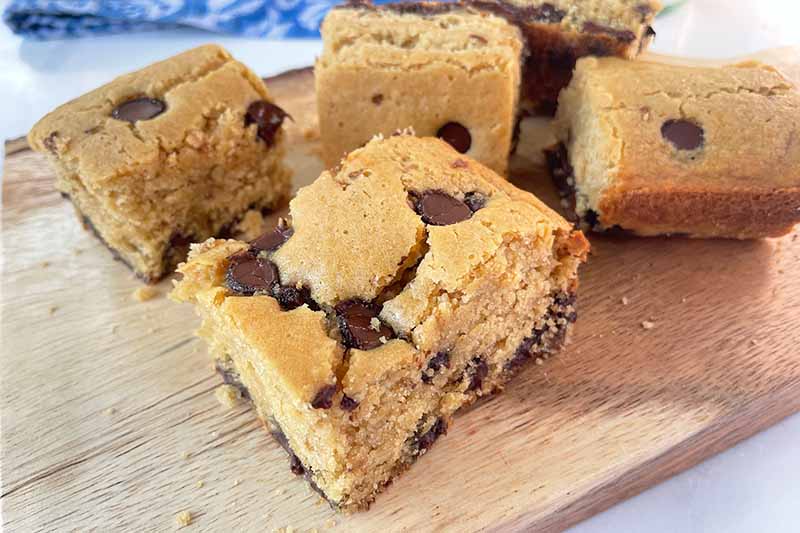 I suggest using chickpea flour anywhere that you want to boost protein or need a dense, stickier binder for sweet or savory dishes that could use a little more stability.

Need to thicken up a sauce or soup for a gluten-free feast? Yep, it can do that too.

How will you take this champion flour for a spin? Share your chickpea-infused favorites in the comments below! And don’t forget to give this recipe a five-star rating if you loved it.

If all this chatter about chickpeas piqued your interest in the superfood, you’ll swoon for these other recipes that call on the legume: 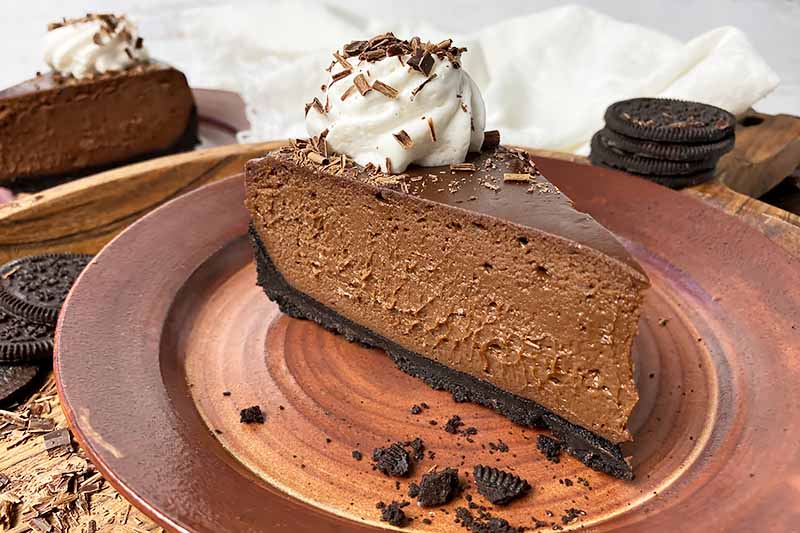 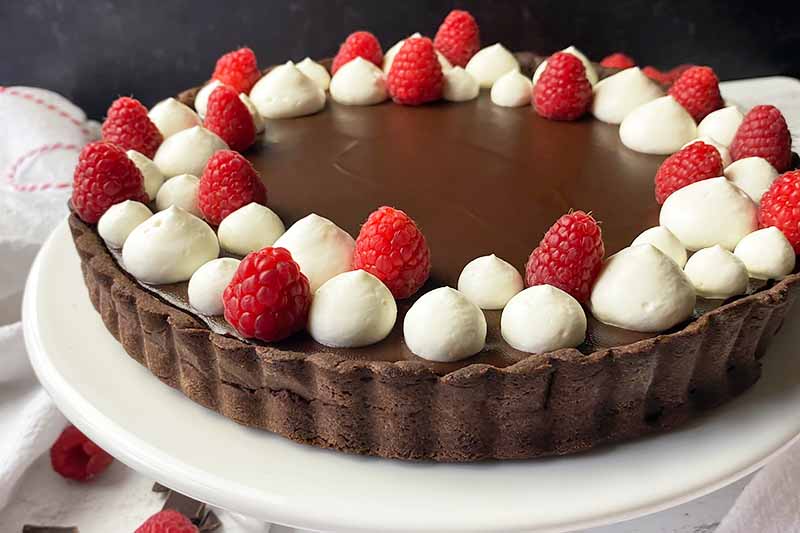