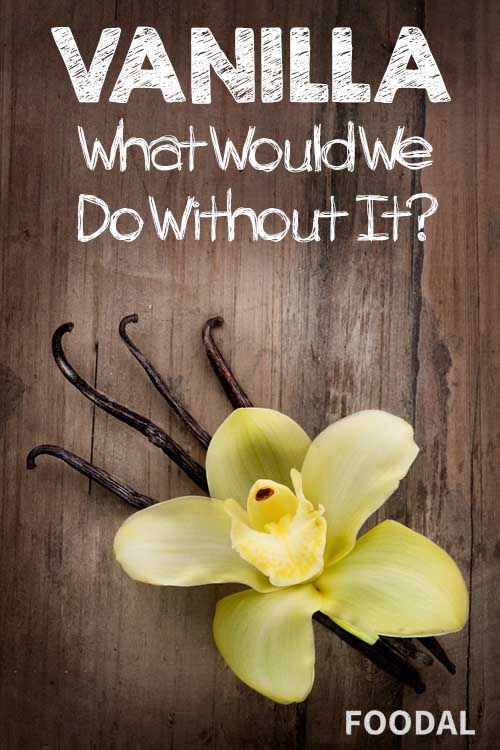 Vanilla is such a popular and beloved ingredient that’s used in so many of our baked goods. Imagine a world without vanilla flavored custard, creams, puddings, sauces, cookies, or cakes.

The highly aromatic, warm and sweet flavor is comforting and uplifting. It suits every season, and it suits so many different recipes.

Besides sweets, vanilla is delicious in savory applications as well, like vegetable, fish and poultry dishes. You can add it to your salad dressings, dips or sauces too, for a tasty twist that’s just a touch extravagant.

Let me introduce you to the world that’s inhabited by the queen of spices. I’ll tell you all about its production, origins, and the many different types of vanilla products, like the beans, sugar, extracts or paste. Finally, we’ll wrap up with a tasty recipe that features that essence of vanilla.

Where does vanilla grow?

Let’s start at the beginning. Vanilla finds its origins in Mexico.

Long before the Spanish conquerors brought the spice to Europe in the sixteenth century, the Aztecs were already using it to flavor their famous chocolate drinks. Alongside cocoa, it became a precious and beloved spice enjoyed by European royalty.

Today, the main area of cultivation for real vanilla is Madagascar, followed by the Comoros and La Réunion, a former colony of France. In earlier times, the isle was called Bourbon, which is where the famous bourbon vanilla gets its name from.

Additional growing regions include Java in Indonesia (a former Dutch colony) and Tahiti. Some vanilla is still produced in Mexico nowadays as well, though production there is far exceeded by that of other regions.

For example, the Indonesian variety is mainly used in cosmetics or liquors, while Tahitian vanilla has a stronger floral scent, making it a popular ingredient for use in fragrances.

The Bourbon and Madagascan strains are the two most common sorts when it comes to baking and cooking.

It all starts here: the orchid

Vanilla production takes an enormous amount of time and patience. The “beans” or pods are the actual seed capsules of an exotic species of a tree-climbing orchid.

Before the beans achieve their familiar black and wrinkled appearance, they must first pass through a long process of growth, pollination, and fermentation.

It takes four years for the orchid to bear its first fruit. Shortly before the blooming period (which is limited to mid-morning for just a few weeks) the green, unripe pods are picked.

This happens approximately months after pollination. And it doesn’t take place naturally – the fruits have to be pollinated by hand. 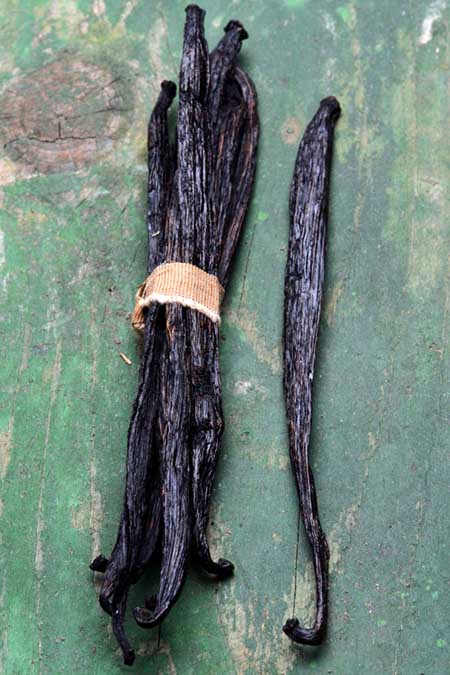 The process of drying and fermentation that follows can take up to several weeks. During this time, the pods shrink and take on the blackish-brown color that we are familiar with.

Tiny crystals also develop on the surface of the pods. These are a sign of quality – try to pick them out the next time you’re buying vanilla beans.

Vanillin is the main flavor that develops during fermentation. It is the spice’s strongest flavoring agent. Today vanillin is also produced synthetically, however, the authentic, natural substance is in no way comparable to the artificial one. 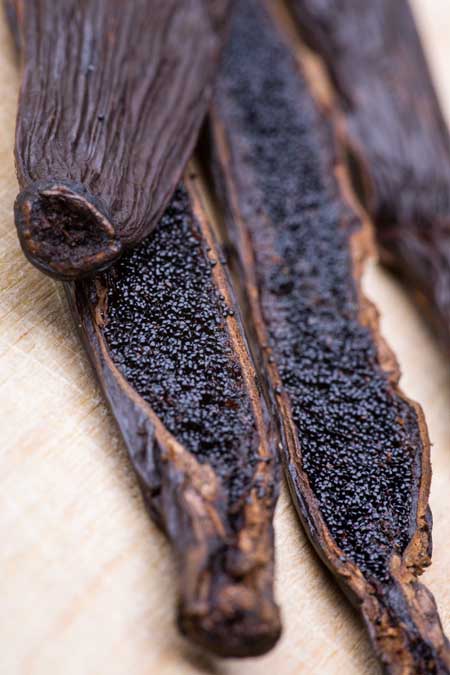 Inside the now shrunken and wrinkled pod, you will find the seeds and some oily liquid, both of which combine to form the vanilla pulp.

The invention of synthetic

It’s because of this tedious production process that real vanilla is one the most expensive spices, besides saffron and cinnamon.

Back in the nineteenth century, the chemist Wilhelm Haarmann successfully produced the flavoring agent synthetically, and artificial vanillin was born.

The invention of imitation vanilla had a powerful effect on authentic production of the spice.

The artificial extraction made it a lot easier and, of course, cheaper for the industry to produce the required flavor. Today, more than 90% of the world’s demand for vanilla is met by the imitation variety.

Even so, the artificial flavoring can’t truly replace the authentic one, since vanillin is only one of several hundred natural flavoring agents that combine to create the complex aroma of the real spice.

Take a look at the ingredients list on your favorite products to find out whether your yogurt or ice cream is made with real vanilla, or artificial vanillin.

Tiny black specks will reveal this secret, too. A pure white appearance in vanilla-flavored baked goods and other products is a clear sign of artificial flavoring (but not the only sign – some manufacturers actually add black flecks to their products to further imitate the real thing).

How to use the beans

Using it straight from the pod is the purest way to flavor whatever you are making with vanilla. 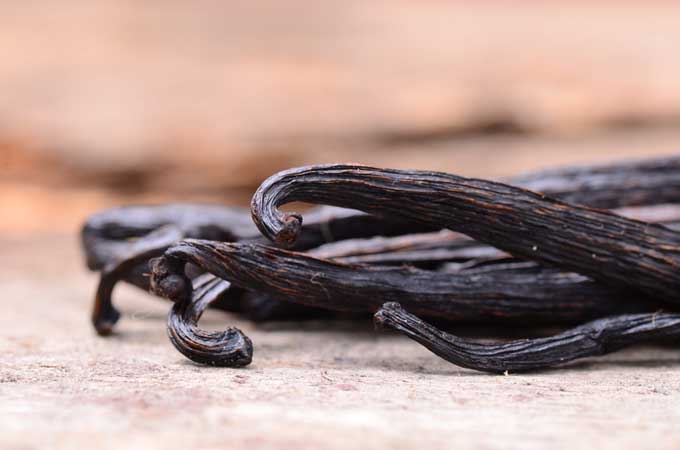 If you don’t want them to lose their aroma, keep the pods in an airtight jar at room temperature, stored in a cool place away from sunlight.

High-quality pods should have a blackish-brown color with a shiny surface that may be covered with tiny crystals. They should feel leathery, but they should also be flexible. 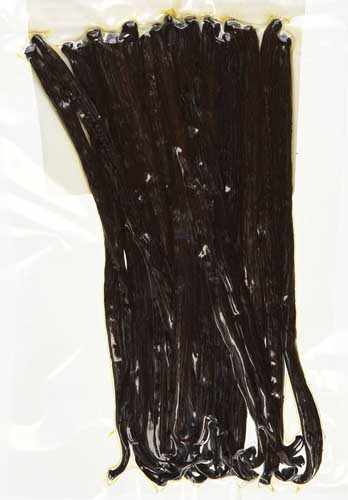 Often, they are sold in small glass tubes. This packaging is suitable because the pods tend to absorb odors from other products, and they will quickly lose their aroma when exposed to the air.

To get at the pulp, cut the pod lengthwise and scrape it out with a blunt knife or a small spoon.

The pulp itself is the oily liquid found inside the beans, while the small dots you see are actually the seeds. Both hold the main flavoring agents of the fruit.

It would be such a waste to only use the pulp that’s inside and throw away the pods. Instead, it’s easy to make your own naturally flavored cooking liquids, sugar or salt.

After you’ve scraped out the pulp, you can reuse the pod in a variety of ways:

For the whole range of vanilla products, one simple rule applies:

Take a close look at the ingredients to make sure they contain the real spice on its own, or with only a few extra ingredients.

Flavored sugar is handy to have, and it can be added to tea, or used with common sugar in baking. Be sure to buy a version that is not made with vanillin. The cheaper mixes often have a shiny, pure white color without any seeds. 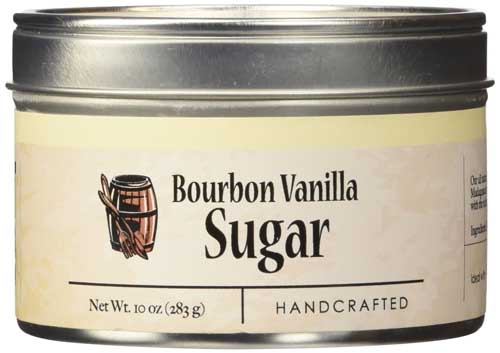 The best and most convenient choice is:

Simply make your own! Especially if you already cook with vanilla beans, following the tips outlined above to make homemade sugar will save you some money.

The powder consists of shredded and ground pods. This is a good alternative if you don’t have any pods on hand, and would like to flavor your dishes altering their appearance by adding those black flecks. 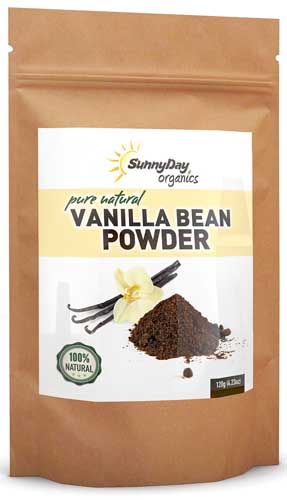 Few ingredients are added when the spice is made into a paste. Often, these include just sugar and water. Sometimes, a natural thickener is added to provide a smooth and rich texture. Still, keep an eye out for any artificial flavoring agents. 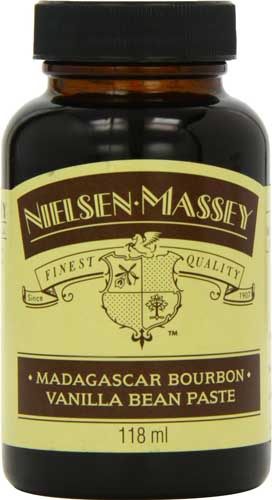 Whether you choose to use powder, paste or extract depends on your personal preference. However, some recipes do require a certain product.

Plus, paste and extract are often highly concentrated, and must be added in small doses.

Liquid extract is easy to measure. It’s also the most economical option, since you often need only a few drops to flavor a recipe. It’s perfect for use in smoothies, shakes or hot chocolate.

What you need to consider is the fact that the flavor of the beans is extracted in alcohol. On the other hand, this is also what makes the extract a long-lasting product.

If you’d like to have another variety for your cabinet, try my recipe for homemade flavored syrup. It’s easy to prepare and it makes a great addition to drinks, desserts and homemade ice cream.

You’re probably familiar with lots of syrups with caramel, chocolate or nut flavors. 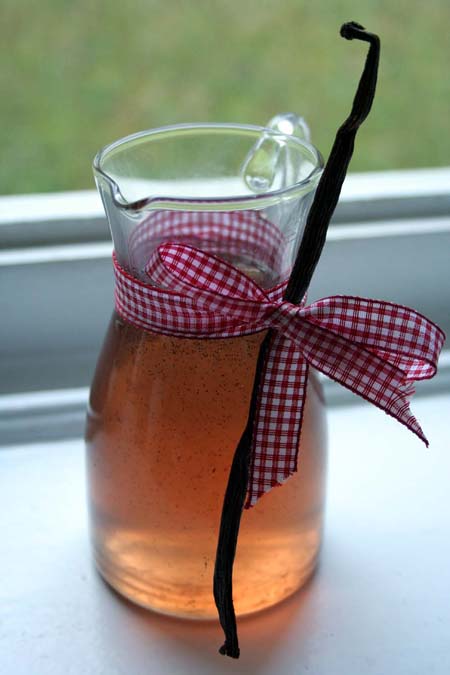 Syrup is a great choice if you want to add just a little hint of flavor to your coffee drink or cocktail. Since it’s made of sugar, you usually won’t need any extra sweeteners when you add it to recipes.

Whereas cheap mass-produced products are often made with artificial ingredients, this homemade version provides you with the real flavor experience. Plus, it makes an amazing gift for vanilla fans, too.

In the end, the syrup will contain the tiny black seeds, too. If you want to, pour it through a fine sieve and filter them out for a clear syrup. 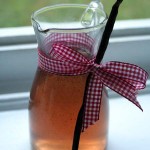 What’s your favorite choice when you cook or bake with vanilla?

Have you tried using it to flavor savory dishes, too?

Share your thoughts and experiences  in the comments  and don’t forget to check out Foodal’s Ultimate Guide to Kitchen Herbs and Spices! 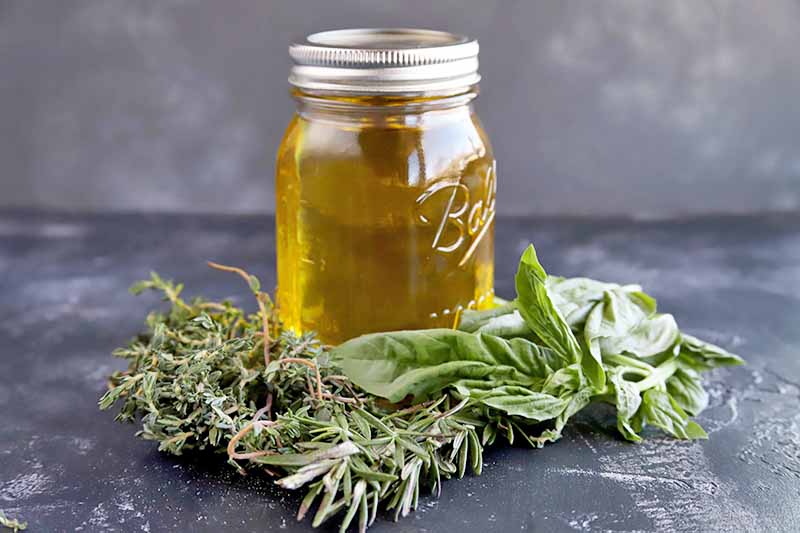 33 thoughts on “Vanilla: What Would We Do Without It?”