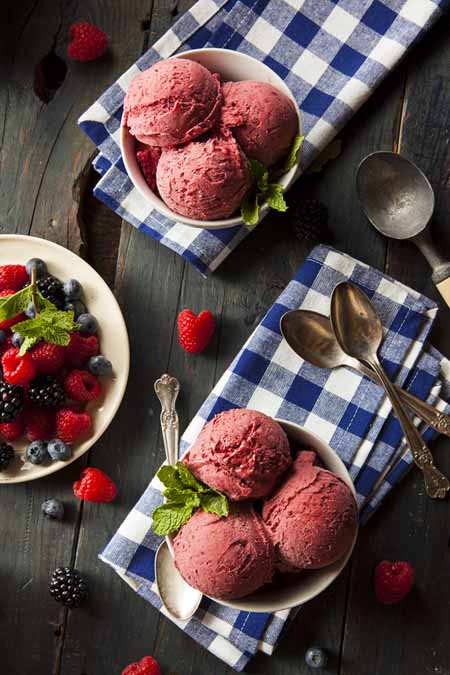 Mmmmm, homemade gelato – the swarthy, Latin cousin of ice cream. And with its lower fat content, it’s like the Mediterranean Diet of frozen desserts. 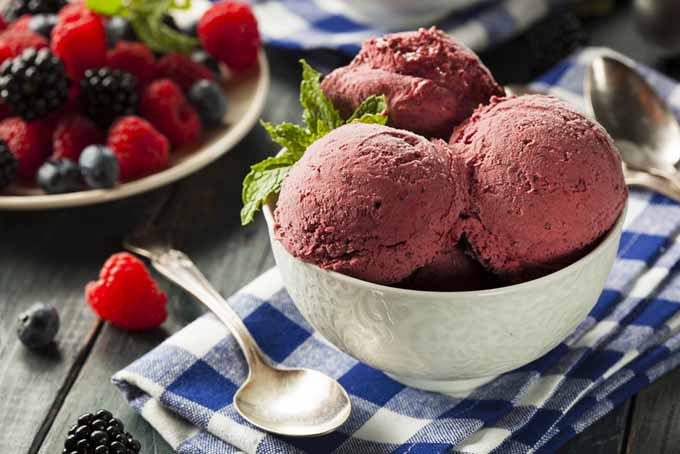 Made from whole milk rather than cream and usually without egg yolks, gelato is a silky and dense Italian frozen treat that’s naturally lighter in calories, and full of flavor.

Churned at a much slower rate than ice cream, less air is incorporated in processing, which results in less volume – it’s more compact in composition and doesn’t have the rich, buttery flavor of cream.

Some believe that this allows the other flavors to present themselves more fully, without being overridden by the cream. And others appreciate the lower calories and reduced milk fat: regular ice creams contain 14-17% fat while the leaner gelato usually comes in at 3-8%.

And true gelato gourmands claim the real deal can’t be made with an ice cream maker – the RPMs of the dasher are too fast and whip in too much air. Ice cream will more than double in volume from added air, whereas gelato will only increase by 25-30%. 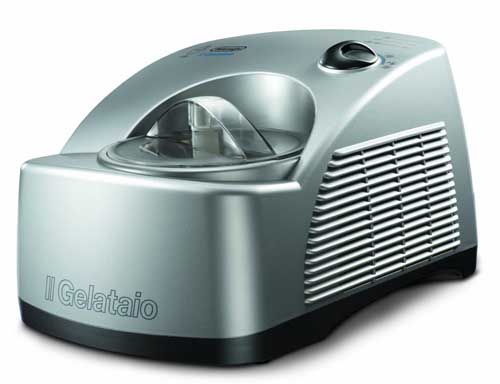 DeLonghi is a well-known name in kitchen appliances, and the GM6000 Gelato Maker is priced in the mid-range cost band for compressor units.

Let’s take a closer look to see what kind of value and performance this particular model will deliver.

With a sleek, contemporary design, the GM6000 makes an appealing appliance suitable for any kitchen.

The mixing bowl is located at the front of the machine, making it easier to add ingredients, to check progress through the transparent lid, or to remove the mixing bowl for serving. And the large control dial can easily be set via the clear icon display. 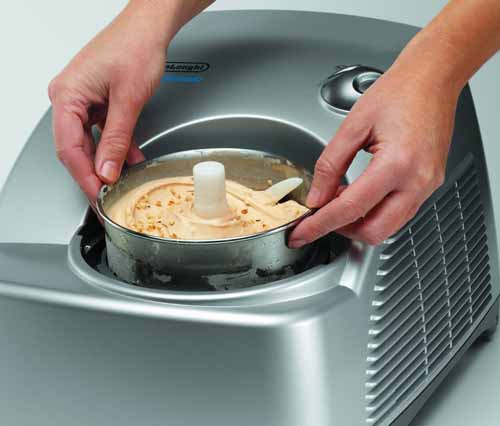 The two pieces that come into contact with the ingredients are both constructed of food-safe materials: the bowl is stainless steel and the mixing arm is BPA-free plastic.

Unlike units that use ice and rock salt or freezer bowls, compressor models come with a built-in refrigeration unit. In terms of convenience and efficiency, these are the rock stars in the ice cream making universe.

There’s no need to freeze bowls for 24 hours before using, nor are extra ingredients like rock salt or ice required. And that means multiple batches are possible for a never-ending stream of frozen goodness.

With the compressor style, you simply pour in the mixture, turn on the machine, and you’re minutes away from enjoying your favorite frozen desserts – it starts churning a batch as soon as it’s switched on.

And the more powerful the compressor, the cooler the bowl gets, which freezes the mix faster. The quicker the freeze, the less processing time, and ice crystals will be smaller – meaning smoother, well-blended results.

This DeLonghi GM6000 uses a removable stainless steel bowl. Stainless steel is an ideal material for frozen dessert makers since the mixture must be brought down to below freezing, and quick and constant temperature transfer is crucial for the mix to develop. Plastic will not deliver the same results.

The transparent, hermetic lid seals the mixture to maintain an ideal temperature, and prevents air from entering – remember, with gelato, less air is churned into the blend. It can be completely removed for easier cleaning, and offers full access to the mixer bowl when adding extra ingredients. 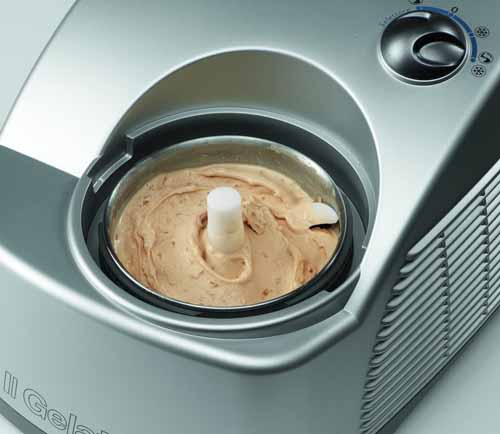 The GM6000 features a patented mixing blade made of BPA-free plastic that achieves the perfect consistency for gelato. By mixing all ingredients from top to bottom in a rolling, over-under motion with a minimum of air, a rich and flavorful treat is produced.

This unit uses R410A refrigerant gas, making its operation more energy efficient, and it does not contribute to ozone depletion.

For fast, convenient cleanup, the stainless steel bowl, paddle, and lid are easily removed, and they are safe for cleaning on the top rack of the dishwasher. 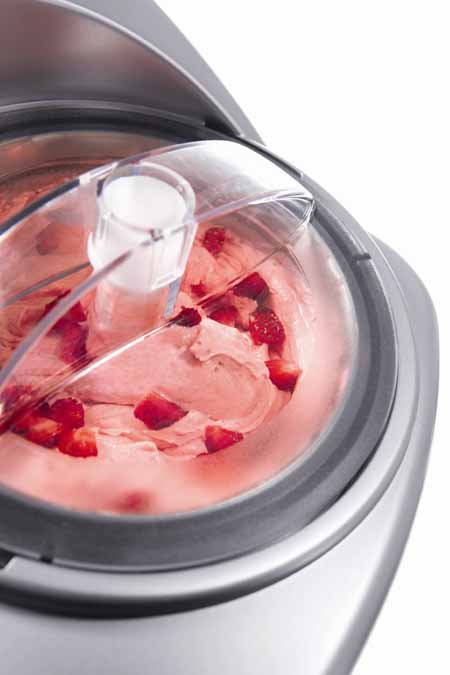 DeLonghi has included a recipe book with 50 different recipes for gelato and sorbetto, with tips and advice for successful production.

And, an instruction manual is also included. It’s recommended that you take a few minutes to read through it and school yourself in the parts and operation to create the best possible icy goodies.

The DeLonghi GM6000 measures 16 x 12 x 9” and weighs 26 pounds. Ensure that you have the counter space to accommodate this unit, as the weight is fairly substantial, and not particularly conducive to moving about with ease.

This model will produce a scant one quart, or approximately 1 1/4 liters, of fresh homemade gelato per batch.

Cleanup is easy. All parts are simple to remove. They are dishwasher safe on the top rack, or can be hand washed in warm, soapy water. Wipe the base clean with a damp cloth.

The following observations are a compilation of the reviews on Amazon at the time of this writing. Unfortunately 1/4 of reviewers reported less than satisfactory performance.

Although there are many favorable aspects to the GM6000, the almost 1 in 4 chance of developing a mechanical issue (as reported by those who left a review on the US Amazon site) are unacceptably high.

Although this number is probably not indicative of the true percentage – as folks that have a less than satisfactory experience will usually complain more loudly than those who have had good experiences will give praise – it’s high enough to raise an eyebrow or two.

And at just under $300 on the street from various vendors, this machine isn’t cheap. Then there’s the next-to-non-existent customer support from DeLonghi when problems do arise…

Unfortunately, and despite the good quality of gelato it produces, this machine simply does not offer the necessary value to justify the price.

There are many other compressor model ice cream makers on the market that will do just as good a job at making gelato and ice cream, and that will also provide years of problem-free service.

This model should be given a pass in favor of a more reliable one – from a company that stands behind their products.

We’d suggest taking a look at the Cuisinart ICE-100 (in about the same price range), the Breville BCI1600XL Smart Scoop (a bit more expensive, but a great machine), or the Lello 4080 Musso Lussino (a whole lot pricier, but the most robust) as better alternatives. 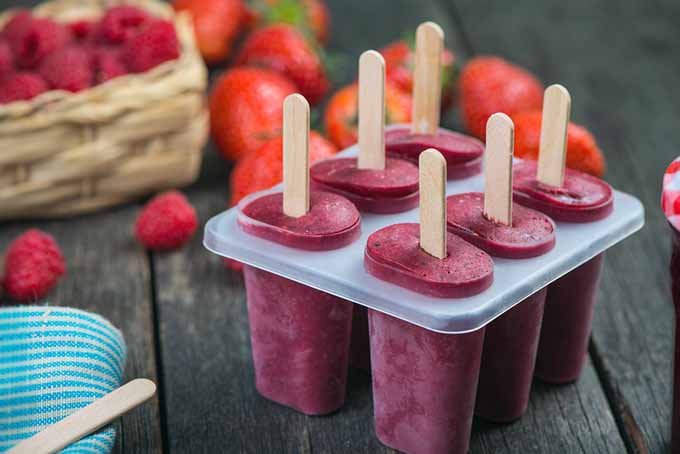 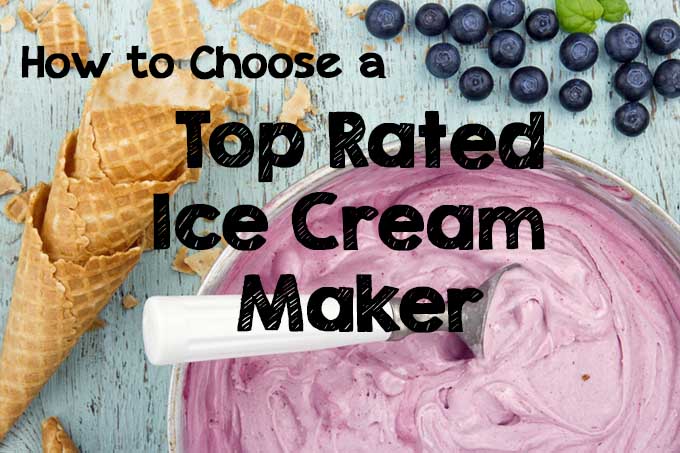 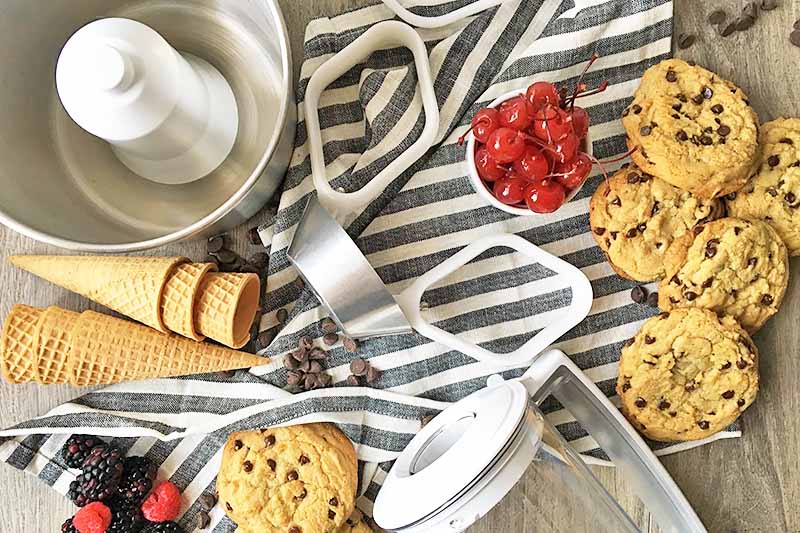 3 thoughts on “The DeLonghi GM6000 Gelato Maker: Pros and Cons”