The idea of einkorn flour is nothing new around here, not when we’ve brought you einkorn pizza crust, einkorn apple tartlets, and einkorn overnight pancakes. But, ask any wife of a fantasy-football-lover, even familiar ideas can be confusing (am I right?). 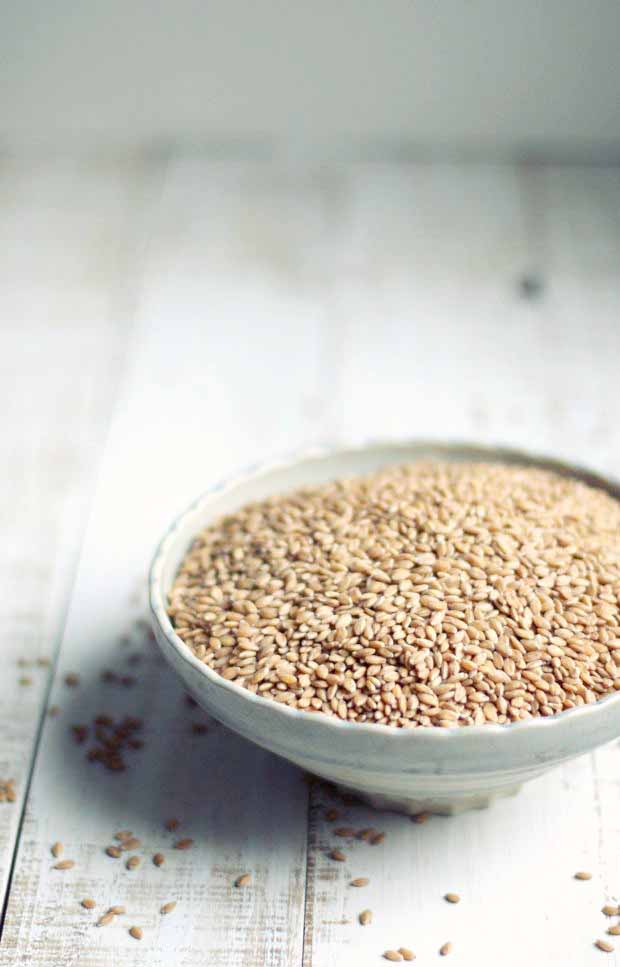 We’ve received so many questions about this ingredient—Why are we using it? What is it? Where can you find it? What’s it like to cook with? Can we buy the berries and grind them ourselves?—that we realized it was probably time for an all-around einkorn explanation post.

So in the following lengthy, FAQ-style paragraphs, we hope to give you the clear, nuts-and-bolts low-down on this new-to-many-people flour (which is actually an ancient grain).

So einkorn flour. What is it? The simple answer is einkorn is an ancient form of wheat, thousands of years old, the kind of thing men were eating in their earliest grain-eating days.

The longer answer is einkorn is original wheat, as in, the kind that hasn’t been hybridized. It’s high in minerals and, like other ancient grains, rich in nutrients (such as beta carotene and B vitamins). It has fewer chromosomes than other grains—14, as pictured in the Jovial Foods chart below—and it doesn’t have the D genome, which many think has caused the most problems with modern wheat. The combination of these characteristics makes einkorn a pretty big deal, at least in terms of digestibility. What’s more, because the gliadin in einkorn functions so differently from the gliadin in modern, hybridized wheat, there’s good reason to think it would be tolerated better by people with gluten sensitivities (see study).

(So einkorn does have gluten? Yes.) 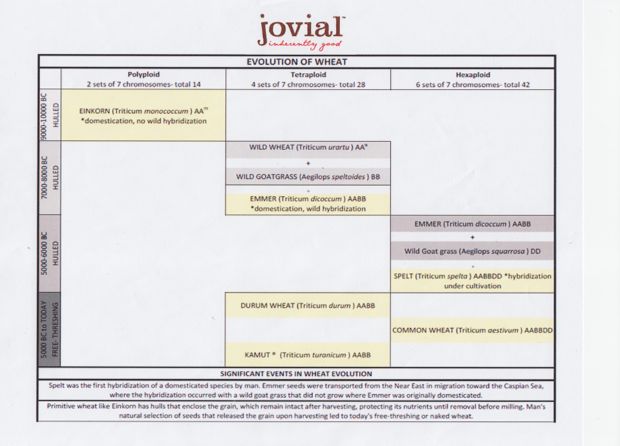 Why are we using einkorn flour now?

Where can I buy einkorn flour?

The best resources for buying einkorn flour are online. We’ve purchased Jovial Foods einkorn via Amazon, when it’s been available there. Note that Jovial only ships within the United States; if you’re located elsewhere, we’d love to hear if/where you find it near you. 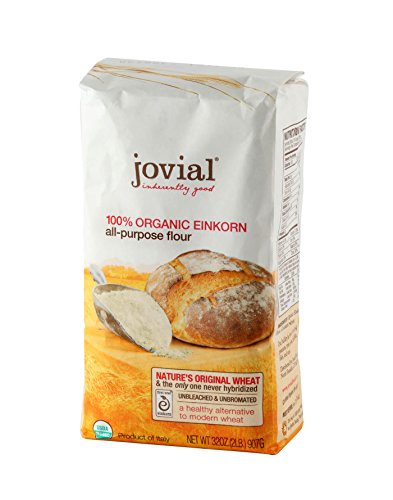 But it’s expensive! Einkorn flour is more expensive than other flour we’ve bought in the past, but we think it’s worth it. Likewise, we don’t use it every day. Our current eating lifestyle is fairly produce-heavy, with grains and dairy and meat in smaller proportions. Over the last few months, we’ve just moved the grains section increasingly to einkorn.

What about einkorn berries? I’ve seen those at [insert grocery here]. Can I buy them and grind them?

Yes! Jovial also sells einkorn berries online, as does our local Whole Foods, in its bulk bins. They not only can be ground into flour at home but also make an excellent breakfast porridge or can be used like farro or wheat berries in a grain salad. 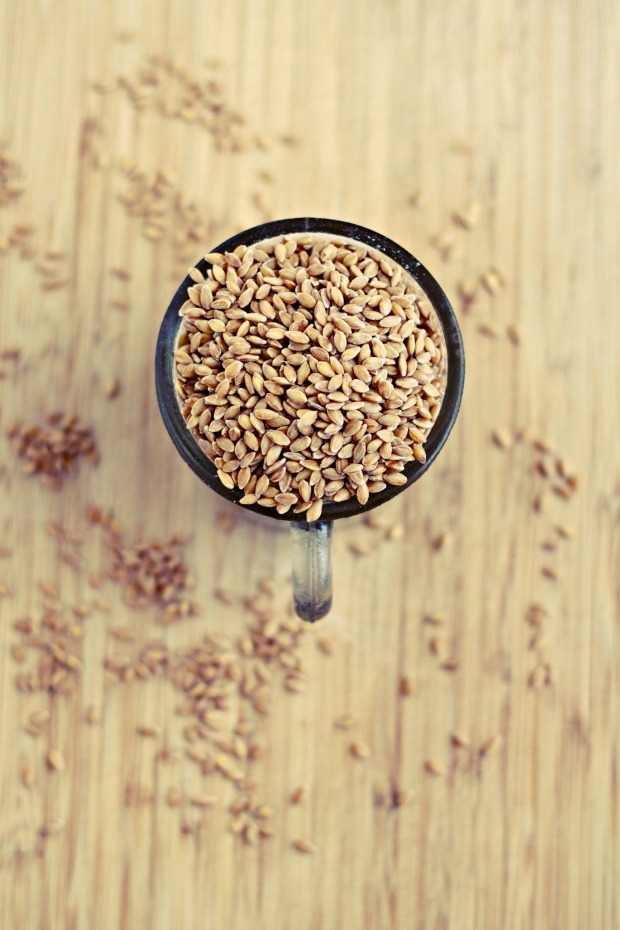 One thing to note, at least when using the flour in recipes, however, is that proportions may be slightly altered in freshly ground flour versus packaged (due to variations in the fineness of the grinding).

Einkorn is a fairly easy substitute for all-purpose or wheat or spelt flour in recipes, but it absorbs liquids a little differently. So when using it, we usually lower the recipe’s liquid content slightly to accommodate the difference.

Do you have any recipe suggestions?

You can see all of our einkorn recipes here. 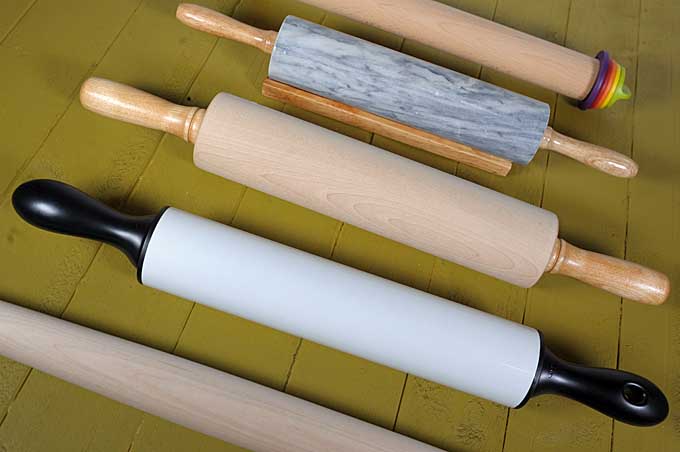 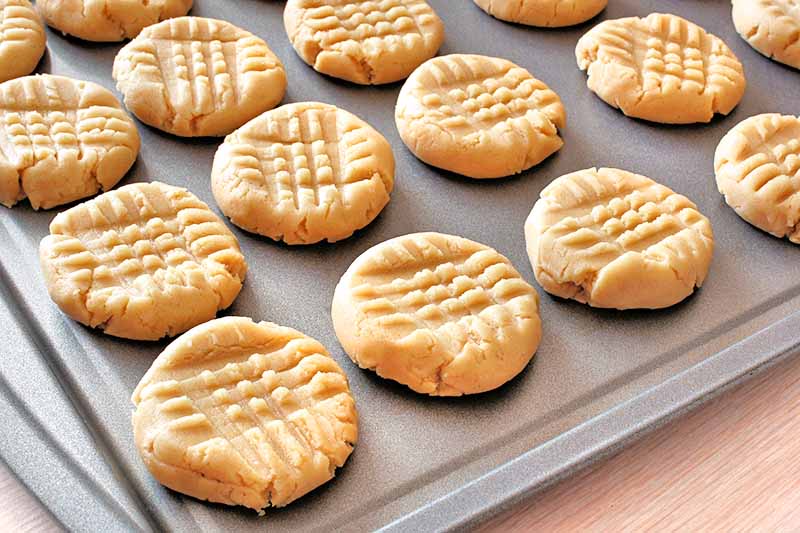 72 thoughts on “What is Einkorn Flour and How Do You Use It?”