The well regarded 14-cup Cuisinart DCC-3200 with a glass carafe has been out for several years, but it was lacking one option that is near and dear to the hearts of some dedicated coffee drinkers:

In order to fill this gap, Cuisinart recently launched the 12-cup DCC-3400, which features most of the same guts and cosmetics of the older model but includes a double-walled thermal carafe rather than a glass container with hot plate. 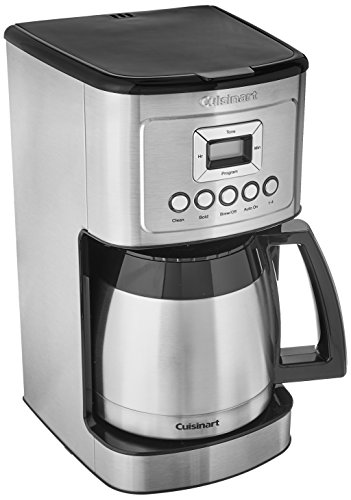 This isn’t a hipster, pour over style coffee maker. It’s designed for folks that want a good cup first thing in the morning, or the ability to brew a big enough batch for guests without a lot of hassle.

It’s not designed to dial down to Nth degree in terms of changing temperatures, adjusting a pre-soak or “bloom” time (it doesn’t have this feature), or adjusting for altitude.

If these features are important to you, you may want to take a look at our reviews of the Behmor Brazen and the Bonavita BV1900TS.

This brewer is designed to make a great tasting cup of joe without having to be a certified barista with years of experience “dialing in” a proper extraction.

The ideal temperature for brewing coffee is 200°F (plus or minus 5°), and most household brewers cannot reach this temperature. The Cuisinart DCC-3400 can.

This means a more flavorful extraction and (bonus!) this is accomplished using less coffee grounds.

Also, the “Bold” setting retains this near-boiling water in the brew chamber for a longer period, which makes for an extended extraction time – putting more flavor in your cup, and again, using less grounds than many other home brewers.

Of course, for maximum flavor, you’ll want to consider using fresh roasted coffee ground in a burr-type coffee grinder immediately before use.

The Cuisinart DCC-3400 is a thermal carafe-style coffeemaker, meaning that instead of a hot plate, it uses a double-walled stainless container to trap the heat similar to the way a thermos operates.

Many coffee aficionados prefer a thermal container to retain heat rather than a hot plate style device, which can cause scorching and allow volatile acids and flavor compounds to escape, leaving a soured and overall foul tasting brew after an hour or two.

A good quality thermal carafe can keep liquid hot for hours. And since it is completely sealed, many of the volatile acids that comprise the flavor remain suspended in the brew, resulting in a pleasant taste in the coffee long after being brewed.

Even Coverage of Coffee Grounds

The DCC-3400 also features a “shower head” to provide full coverage of piping hot water to all of the coffee grounds, allowing for even extraction of all of the flavor compounds. Lesser models often just have a single orifice to supply the hot water to the brew basket.

A shower head design allows for multiple openings to disperse the heated water above the filtering area, which ensures complete saturation.

A 12-cup coffeemaker is on the larger side for a residential model, and this makes it easy to brew enough to serve guests.

Just so that there is no confusion, the industry standard for a “cup” is 5 ounces – based on older coffee cups from a time before we all became accustomed to “supersizing” everything. So yes, this model will fill 12 regular coffee cups, but not twelve 20-ounce travel mugs.

Brew a Few Cups at a Time

Most coffeemakers don’t get up to full temperature in the first portion of their brew, and therefore they make a weak cup if brewing less than a full batch.

However, the Cuisinart DCC-3400 includes a “1-4 cup” setting that ensures the water is at full temperature prior to starting, allowing full flavored strength in small doses.

An included charcoal filtration system works to reduce chlorine and other contaminants within the water supply and helps to reduce the buildup of “scale” or calcium carbonate within the brew chamber. 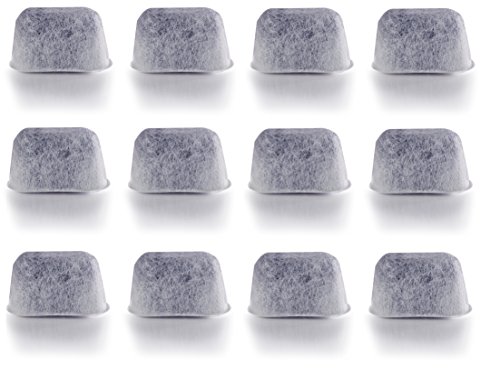 You can choose between Cuisinart branded replacement filters or generic replacements that are also available.

The DCC-3400 comes with a cone style gold tone metal permanent filter, but paper cone style filters will also fit if you prefer less coffee oil and tad bit less silt in your cup of joe.

This model has more stainless than many of Cuisinart’s past offerings. This one is truly decked out – offering a premiere look at an affordable price.

You see your coffee maker every day in your kitchen. It’s not like you put it away every day, so aesthetics are important! 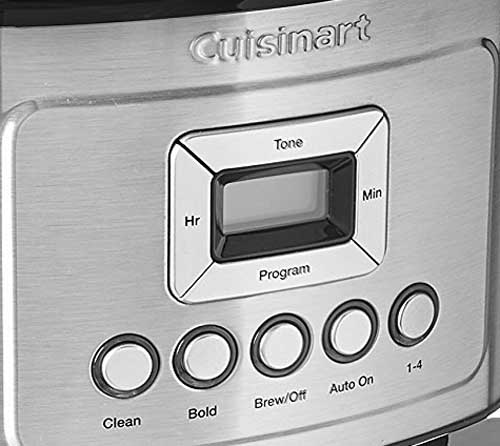 It looks as if this model also has a “Clean” function, but it’s just a warning light that lets you know when the machine needs to be cleaned of any buildup of calcium carbonate or “scale.”

This is easily accomplished by running a batch of citric acid, a purpose-made coffee machine cleaning solution, or in a pinch, a blend of water and vinegar, through the machine.

The controls located around the clock include the 24-hour program function as well as separate hour and minute buttons. There’s nothing more irritating than having just one button that functions for setting both the hour and minute (think cheap alarm clock) but you won’t have that problem with this machine.

The tone button is useful for turning off audible alarms and chirps. Pets and late sleepers will both thank you.

A good option for those that want a thermal carafe based model for a decent price. See more customer reviews on Amazon now!

The Cuisinart DCC-3400 has a few issues that lower its rating a bit from its glass carafe based sister (the DCC-3200).

Namely, the carafe itself.

It could stand some improvements. Some folks complain that at two pounds, they don’t know how much coffee is left. But that is the nature of the beast. 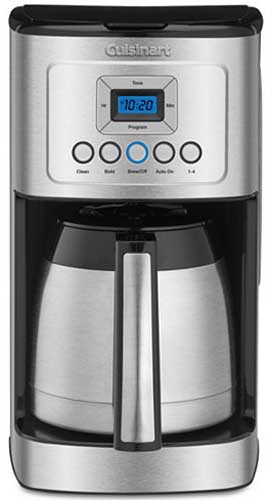 The real issue is the need to turn the carafe dang near vertical to get the last third of the pot into your cup. And once it starts to flow, lines in the mouth of the vessel encourage splatter.

This model is still a decent option but it isn’t without its flaws, and we’d like to see some tweaks to the design of the carafe. This weakness significantly reduced the Ergonomics score for this this model (and the Value score a bit as well).

Other thermal carafe based models such as the more expensive Zojirushi Fresh Brew Plus and the Behmor Brazen aren’t without their problems either.

Without that reduction, this DCC-3400 would be our #1 recommendation for most households. It’s still an excellent choice if you can live with minor annoyances.

Read all the customer reviews on Amazon and see if the carafe issue is a showstopper for you.

Want more options? Check out all of our coffee maker reviews and make sure you check out our extensive automatic drip pot buying guide. 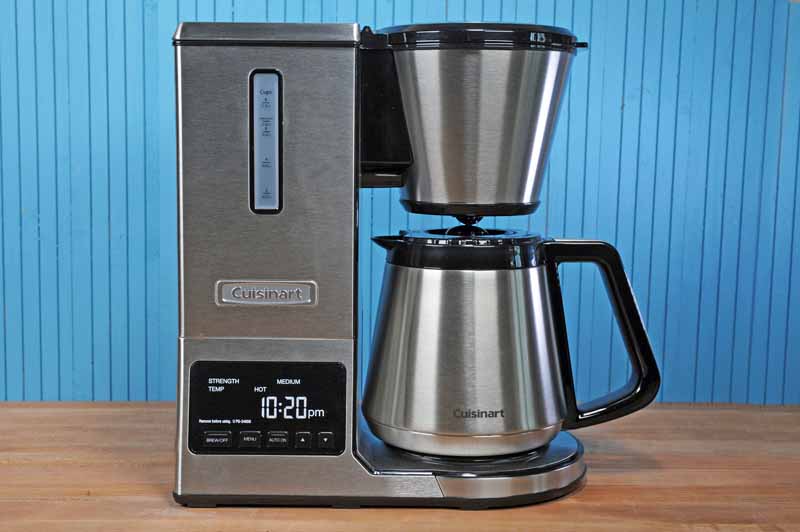 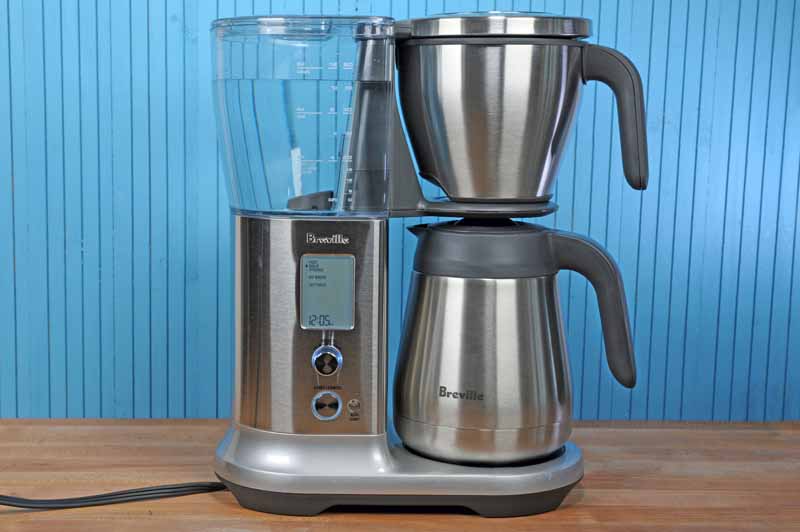 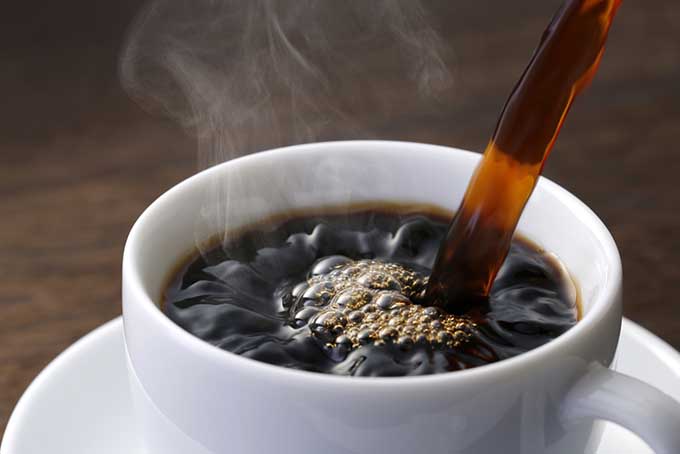