Marzipan is one of my favorite sweet treats.

Although it is available throughout the whole year, I see it as one of those ingredients that is inseparably connected to the winter season. 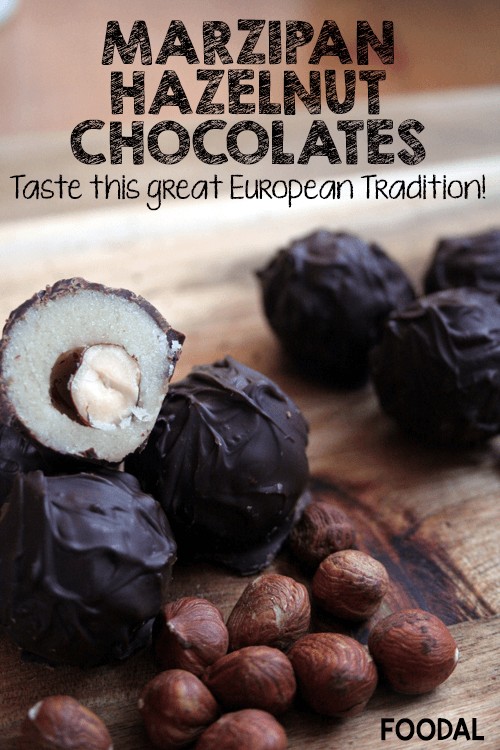 A popular way to consume almond paste is as a part of chocolates and various types of candy.

There are marzipan potatoes, figures, chocolate-covered loaves, Mozart balls or the famous German Niederegger marzipan from the city of Luebeck.

Nevertheless, there are certain levels of quality involved when it comes to this delicacy.

Everything You Need to Know About this Amazing Almond Paste

An important aspect is the balance between sugar and almonds: 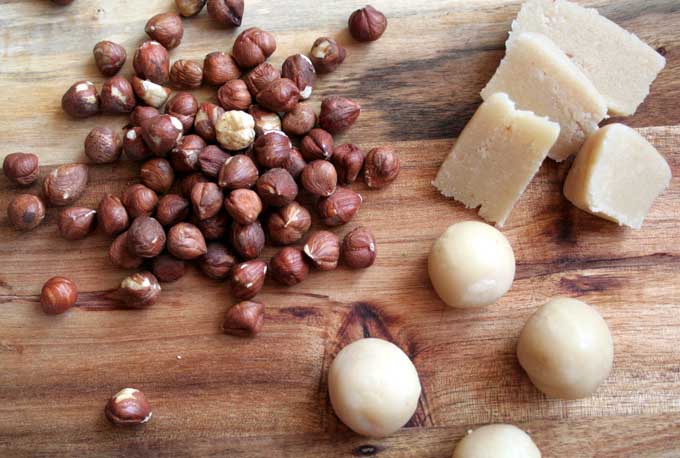 The industry therefore developed a cheaper substitute with peach or apricot kernels used instead of almonds. This product is no longer allowed to be called marzipan, but instead it is referred to as persipan.

It is often used when producers want to lower their costs, so have a look at the description and list of ingredients when you intend to buy the real deal.

So, let’s find out about the origin of this seductive paste, what it’s made of, and exactly how this influences the different levels of quality.

Well, if only this question was simple to answer.

It is assumed that marzipan has its origins in the east. In the Middle Ages, it was brought to Europe by Arabs. It started to become popular quickly, especially in Spain.

The famous Toledo (the one in Spain not Ohio) variation that evolved there is still known around the globe. It was in the thirteenth century when it was first mentioned in Venice as marzapane.

During the fourteenth century its popularity spread further, though it was only produced by pharmacists, just like other sweet treats at that time.

However, the actual inventor of this delicacy can’t be identified for sure. One simply can’t say which city, and therefore which person, was the first one to produce this delectable sweet.

Nonetheless, it is said that two pastry chefs each founded their own production in the beginning of the nineteenth century. One of them was Johann Georg Niederegger, from Luebeck in Germany. 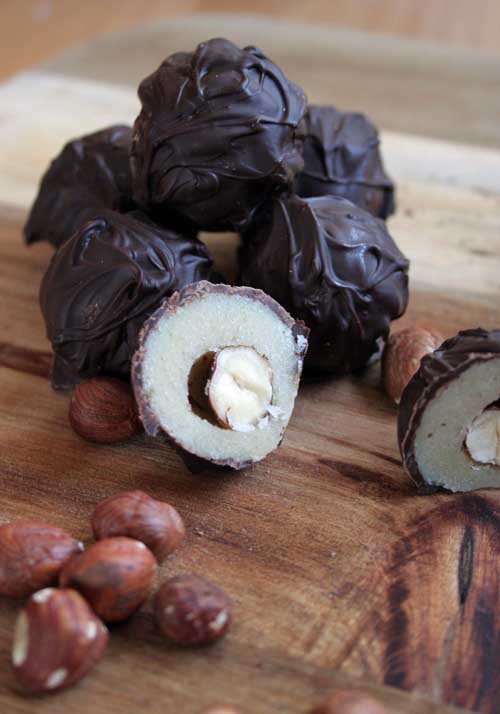 In German cities like Nuremberg, it became popular to make a batch and give it away as a present on holidays like Christmas. Rich patricians even produced special emblems out of the sweet paste.

Today, we know lots of different products that are either made of pure marzipan, like the little lucky pigs given as a symbol of good luck for the turn of the year, or some that contain some as an ingredient, such as various kinds of chocolate-covered pralines.

How to Define Quality

The question of what marzipan is made of can be answered easily: almonds and sugar.

But is it that simple?

This is because, between those two ingredients, there can be made huge differences involved in combining them during production.

An important aspect that determines this is the ratio of raw paste and extra sugar.

Ground almonds and sugar are combined to form the so-called raw paste.

In general, this raw paste consists of two parts ground almonds and one part sugar, which is then heated up and roasted while its is being stirred to reduce the amount of water. It is important to keep a certain temperature during the process to maintain a good product. 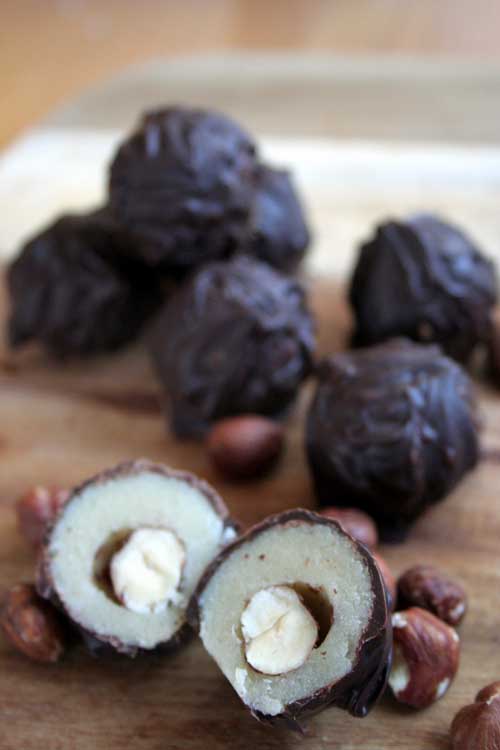 Rosewater is sometimes added to provide a subtle floral flavor that complements the nutty taste.

After the production of the raw paste, extra sugar or additives can be added to the mix. The amount of sugar and additional ingredients determines the quality of the final product.

There are certain grades of marzipan. These are the official names, depending on the ratio of extra sugar:

If you’re on the lookout for a nice treat, give my homemade chocolates a try. They are easy to prepare and a great gift idea. But, of course, don’t forget to keep some for yourself!

If I want to serve some homemade treats but I am not in the mood for baking, or I don’t have time to spend hours in the kitchen, this is the perfect way to make some sweet pralines that are filled with a nutty surprise inside. 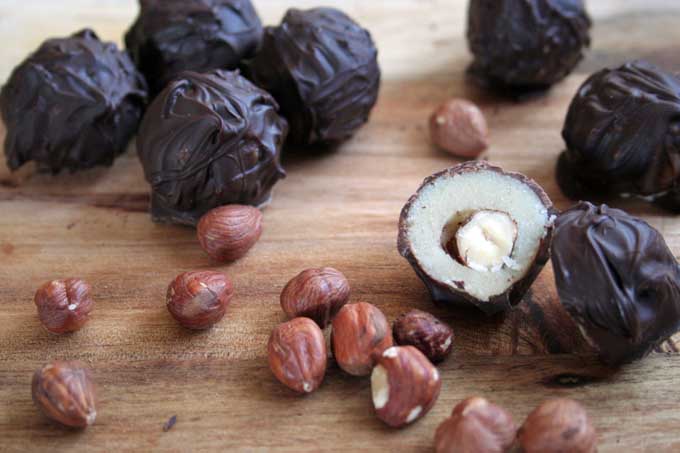 Plus, these goodies are probably as quickly prepared as they are nibbled away. 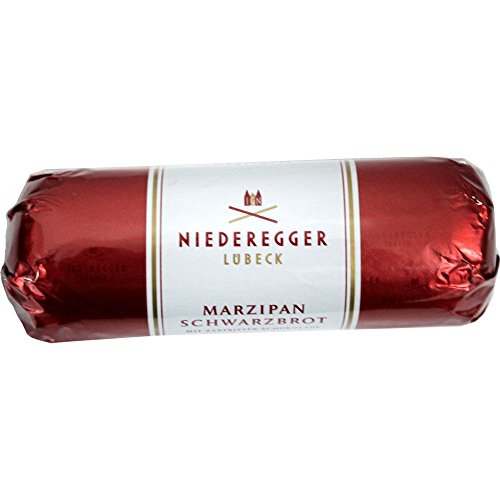 In the US and Canada (and probably the UK) you can pick up Niederegger Lübeck Schwarzbrot’s Marzipan Mit Zartbitter Marzipan through Amazon.

Instead of using hazelnuts as a filling, make it fruity instead by stuffing each one with a homemade candied cherry.

For something a little different to pair with these on your candy dish, we recommend this recipe for white chocolate coconut delights. 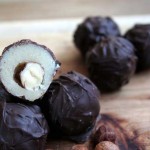 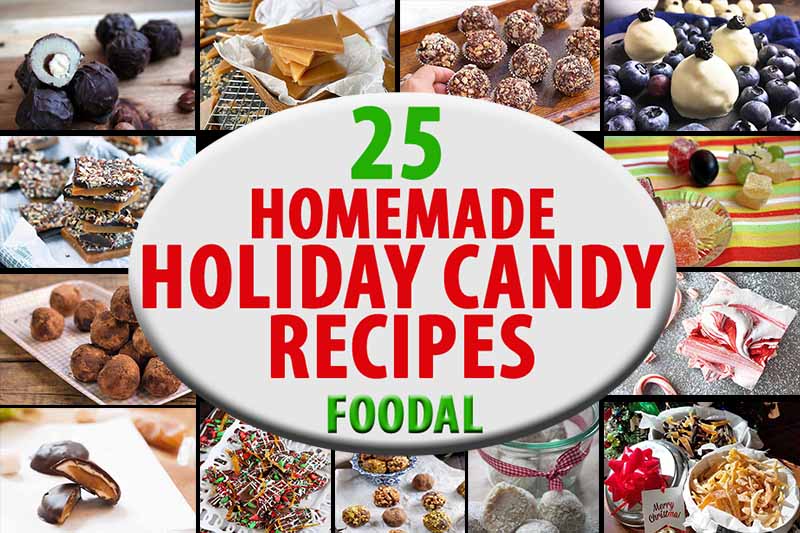 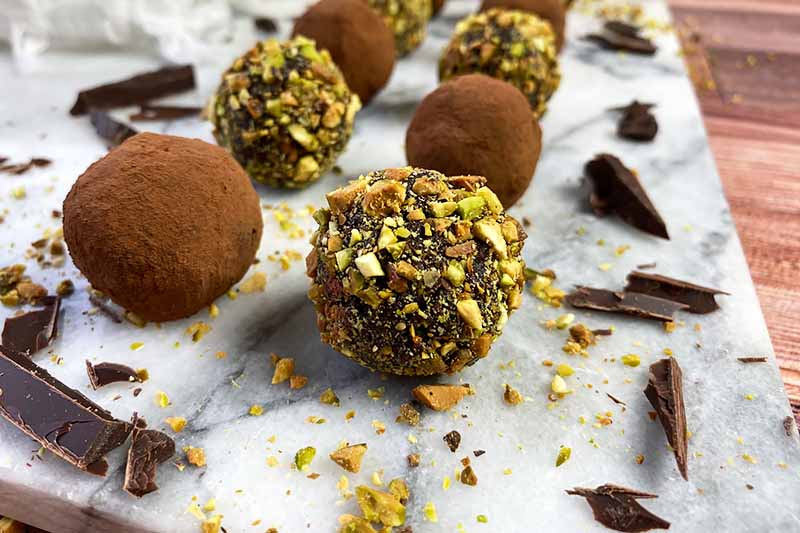 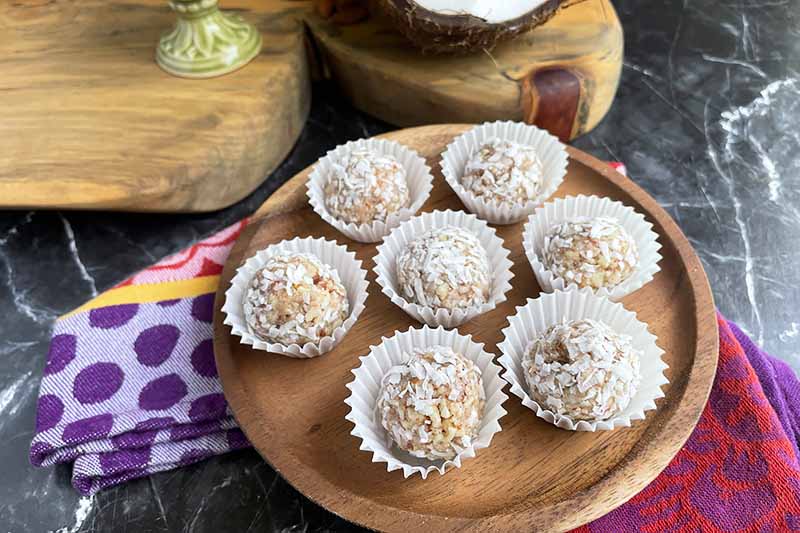