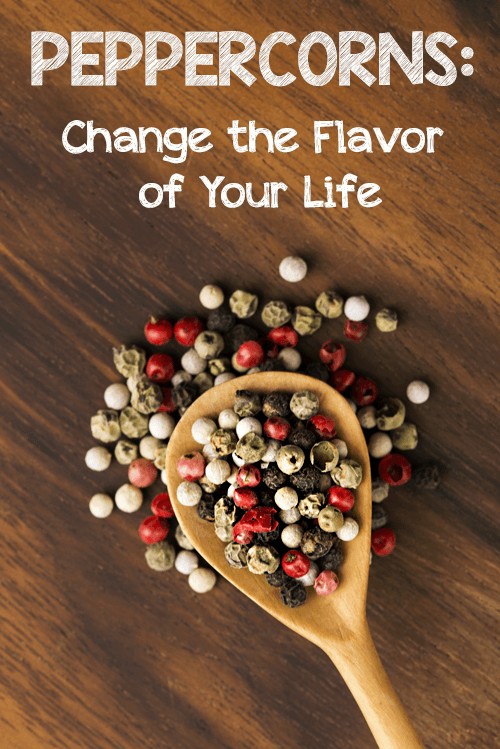 You’ve decided on the perfect pepper grinder and it has arrived on your doorstep. But you certainly don’t want to fill your shiny new toy with old, stale peppercorns!

When you have a high quality mill, you want to take full advantage of its ability to provide you with incredible flavor.

Whether you are interested in black, white, or colored varieties, getting the most out of your grinder means stocking your kitchen with the best specimens of this particular spice.

But can choosing the right products and varieties really make a difference in your cooking?

With the huge variety of spices available on the market today, it can be difficult to decide which ones to buy. This little guide should help you along in understanding what’s what in the world of pepper.

Peppercorns typically come from the common tropical plant, Piper nigirum. This is a woody, flowering vine that has been used since ancient times and originated from India, which has been known to grow up to 30 feet in the hottest climates.

In ancient times the dried fruit was considered so precious that it was often used as currency for trading.

Piper nigirum is now grown in various parts of the world that have tropical climates, with the highest production and export coming from Vietnam. 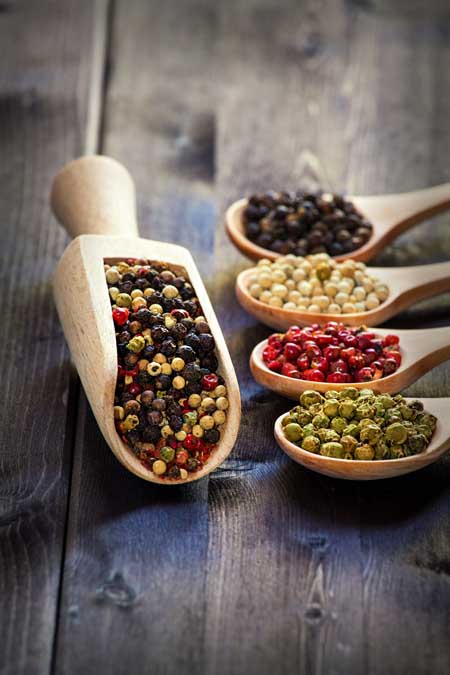 Just like coffee beans and grapes, the climate and soil of the place where the vines are grown will greatly affect the flavor, as will the ripeness and processing of the fruit.

The berry-like fruit of Piper nigirum starts out as a small, white flower that turns into a bright red berry when allowed to ripen completely.

The fruit may be picked when it is partially ripe or fully ripe, which accounts for the differences in color of the final product.

The oils in the berries that affect the flavor the most are terpenes and pyrazines, which create hints of clove and citrus flavors as well as earthy aromas.

We don’t often consider the nutritional and health benefits of spices, maybe because they seem like such a small part of our diets. However, many spices have health benefits to offer, including pepper’s ability to work as an antioxidant, antibacterial, and even as a thermogenic warming spice.

The piperine compounds found in the spice may be able to boost metabolism, meaning they can help you to burn calories and maximize weight loss. It’s also source of copper, manganese, vitamin K, iron, chromium, calcium, and dietary fiber. 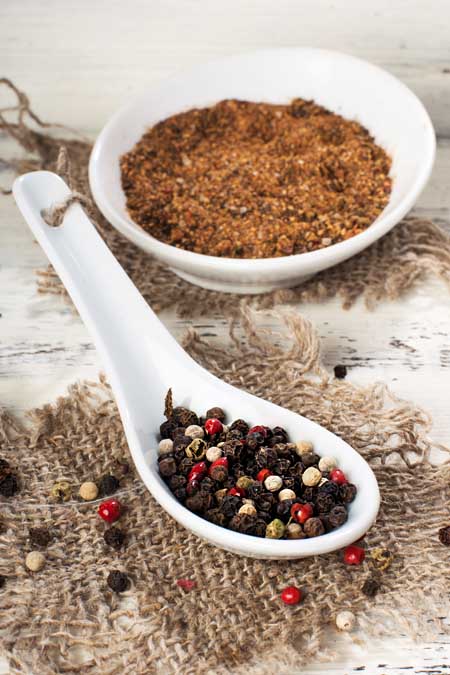 This spice is also known to stimulate the appetite as well as aiding with digestion by sending a message to the stomach to increase the secretion of hydrochloric acid. The acid helps the body to digest the food rapidly and avoid the production of uncomfortable intestinal gas.

So get your grinder ready and choose your peppercorns to fill it with, because the health benefits are numerous.

Green (and White and Pink and Red) Is the New Black

Name the first color that comes to mind when you think of pepper.

Sure, the ubiquitous pre-ground black variety is a staple but you’ve got to get more creative when you think of peppercorns. Imagine all of the colors of the rainbow and then you’ll be on track. 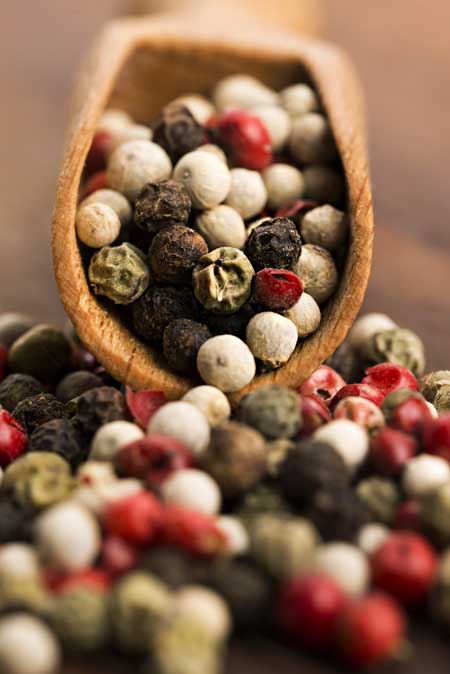 Here’s the rundown of why you want to add more color to your life (and your table) in the form of pepper:

Black and White Peppercorns come from berries of the plant that are picked when they are mostly (or completely) ripe.

The greatest difference between black and white versions is that the outer shell has been removed from the white leaving only the seed, while the black variety still has the outer shell on it.

That black outer layer is what most people are expecting when they use the spice, and removing it makes a difference in the taste as well as the look of the food that you add it to. 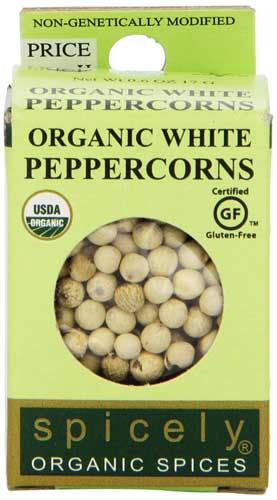 Check out the Spicely Organic White Peppercorns available on Amazon

Typically the white version is used simply for visual appeal rather than specifically for the flavor, but it does have an earthier, less pungent flavor than the black version.

The green type is simply the unripe version of the same plant that produces the black and white varieties. Because they are unripe, the green ones are a bit more difficult to preserve and they don’t usually last as long in dried form. 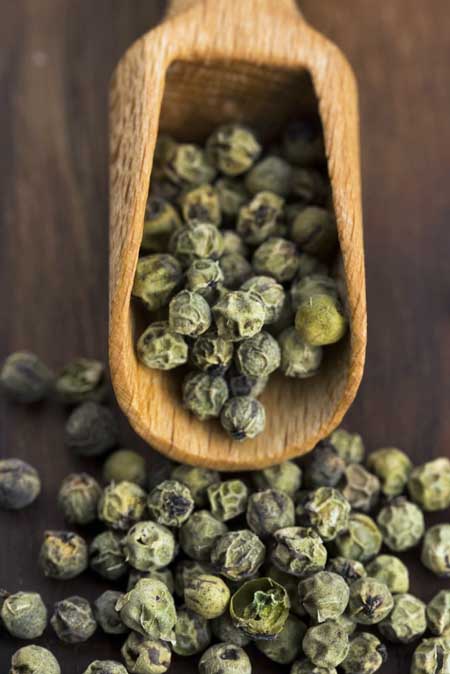 This means that it may be best to buy them in smaller quantities more often, rather than buying in bulk and expecting them to keep. And that works out well because the inconvenience of processing green peppercorns means this type is one of the more expensive of the bunch.

Green versions of the spice have a less potent flavor and are widely used in French, Thai, and Creole cooking. 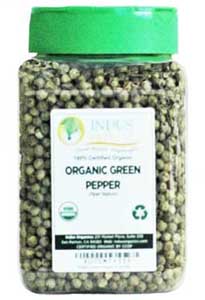 Red varieties come from the same plant as the black, white, and green types, but they are a little less common. Note: This is not to be confused with “red pepper,” which may refer to ground capsicum or cayenne.

When the fruit stays on the vine and comes to full maturity, it is bright red. 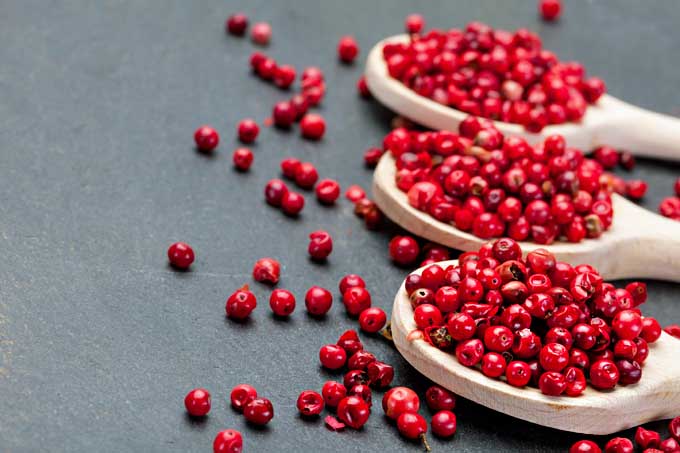 Then, as the red berries dry, they tend to darken and often simply turn into the black version that most people are accustomed to.

Partying it Up With Pinks

Pink versions of this whole spice (sometimes called Rose) are actually a misnomer in that they come from a completely different plant, Schinus molle or Shinus terebinthifolius, sometimes known as the Peruvian peppertree or South American pepper.

Preparing this pink variety for use as an ingredient is much easier in a mortar and pestle rather than using a traditional mill since they are much less dense than true black and white berries.

Note: Be sure to avoid Schinus molle/terebinthifolius derived products if you have nut allergies; they are related to cashew and other nut bearing trees.

Another similar plant is Baies roses, a perennial flowering vine located on the French island of Reunio (Pimienta Rosada) n in the Indian Ocean.

Because these dried pink berries look a lot like traditional peppercorns, they are often still referred to as a pink version of pepper.

The flavor may be slightly mild with a hint of sweetness and acidity.

This pink spice may be a bit more expensive than what you might expect from the white or black versions, and may be more difficult to find because it is more unique and not as popular.

These add a touch of sweetness but are most often used in blends for their color, rather than for their flavor.

Get Exotic With Szechuan

Szechuan pepper (aka Sichuan aka hua jiao) is another psuedo peppercorn. 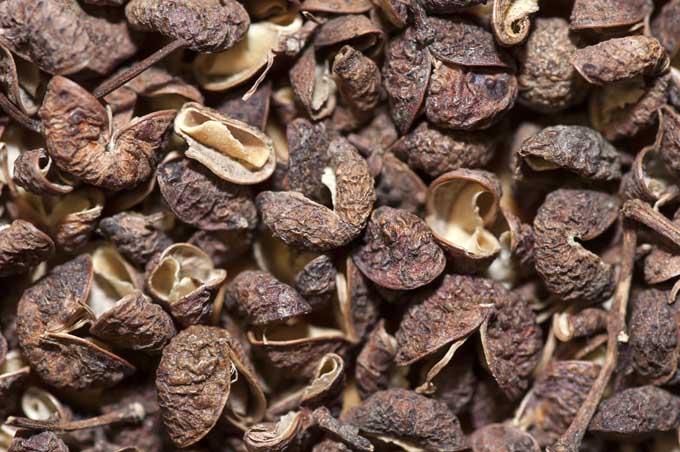 Szechuan is a highly fragrant spice derived from the husks surrounding the seeds of the Prickly Ash Bush. This spice was used in various dishes within China will before the common peppercorn spread outward from its native regions. 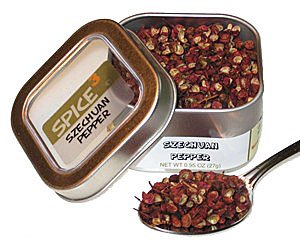 Depending on the amount that is is added to dish, the effects range from a tingly to a numbing sensation and when used in very small quantities, and can add a whole lot to the taste that can’t be recreated with any other spice.

Again, you’ll need a mortar and pestle or an electric coffee grinder or spice grinder to prepare these.

Check out this Kung Pao Chicken recipe for ways to use this very fragrant and powerful spice.

Are All Peppercorns Created Equal?

Consider the fact that these little gems come from a variety of different places, are grown in distinct soils, and are processed in a variety of ways.

If you begin paying more attention to the aroma and taste, you’ll realize that there are a plethora of unique selections and a vast range of flavors. Here’s a small grouping of some of the most interesting options:

Called Tellicherry after a town on India’s Malabar Coast, this version of the spice is considered gourmet and is often preferred among chefs and others with high culinary standards.

The berry actually comes from the same Piper nigirum plant, but it is allowed to ripen for a longer amount of time before it is picked. This means the flavor is given time to fully develop into something that is more intriguing and complex. 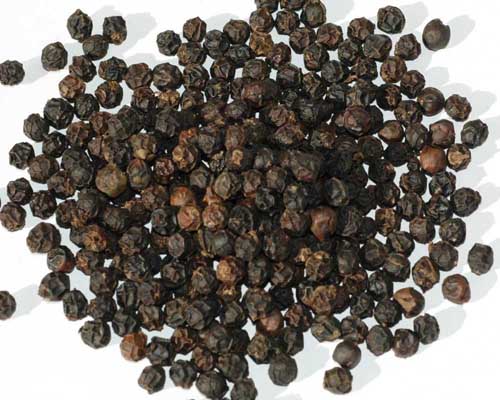 Rather than just being hot and sharp like other peppercorns, the Tellicherry version is slightly more fruity and citrusy, with a bright freshness. It offers a more balanced, almost grassy flavor and aroma, and is considered one of the most sought after examples of the spice.

From Indonesia, this spicy version offers a slow burn that develops as time passes. With woodsy and citrusy aromatic notes, the scent seems to be more powerful than the actual flavor. 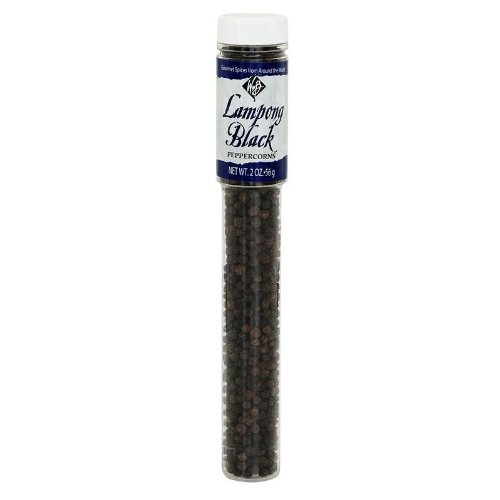 Great for use when freshly cracked at the table, over a salad or steak, sharing the aroma with the end user.

Traditionally used in blends, these berries are grown and harvested in Indonesia where they are soaked in cool water barrels to loosen the outer shell.

These are often very hot and provide a taste of mild fermentation similar to other white options, but with a strong kick.

Extremely strong and pungent, this version offers an intense brashness that quickly turns into a kinder undertone. This one is effective when used alone for abrupt flavor, or works well when added to a blend of others that last longer.

The largest supplier and trader of the spice in this day and age, Vietnam offers a rather “standard” version of peppercorns and are often the common variety that you’ll find at Trader Joe’s or your local warehouse club.

Useful for every day, the aroma is powerful but the taste has a bit of mellowness. Simple and pleasant, this type might go well blended with other, more zesty varieties.

From Malaysia, Sarawak offers an earthy tone with a moderate flavor. This one acts as a changeling, depending on what you use it with. Slightly sweet and spicy, this is a good basic variety for using on the table or in sauces. 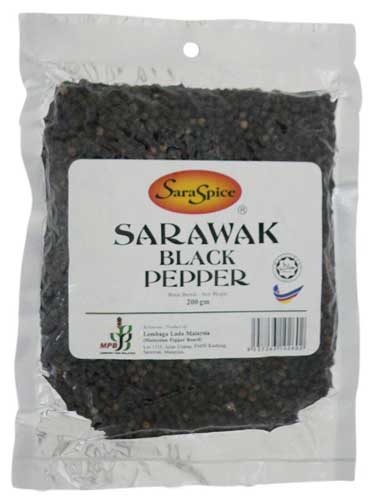 These may come in a creamy, white form that has been picked at the beginning of ripeness and then placed in a cool stream for a couple of weeks to remove the outer shell, leaving only the seed.

Zipping over to Ecuador, we find this unique chili-like option that provides a slow heat and sharp flavor. Slightly bitter, the verdict is still out on whether it is loved or hated, which obviously means that the affections one may feel lie within the realm of personal preference.

As with most spices, the expected flavor may often be indicated ahead of time by its aroma.

Although the full flavor is not released until the shell is cracked open, it is still possible to get some idea of what you can look forward to simply by smell. 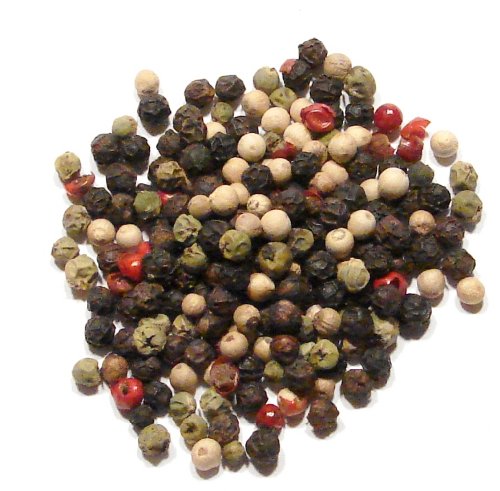 Not to mention the fact that you can begin creating your own blends and turn this into a custom venture.

There’s a whole world of expanded flavor out there just waiting to be explored!

32 thoughts on “Peppercorns: Change the Flavor of Your Life”