Working in professional kitchens, I’ve learned how to avoid letting anything go to waste. Vegetable scraps turn into stock, egg shells are transformed into compost. I even bake bread from a local brewer’s spent grains.

But no matter how much hummus, falafel, or roasted snacks I make, I’ve never once thought to reserve the leftover liquid from canned chickpeas for another use in my cooking after I make a recipe like chickpea veggie burgers or chickpea grain bowls.

That opaque, viscous stuff always goes straight down the drain. 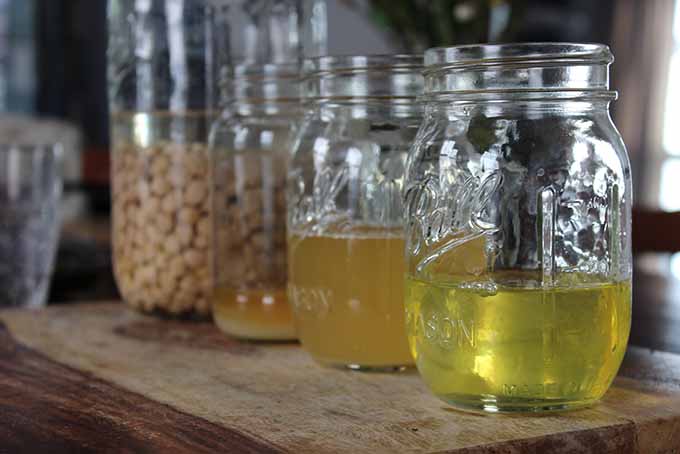 Thanks to Facebook’s collective hive-mind of vegans, that once wasted juice now has a name: aquafaba.

Made up of a unique blend of starches, proteins, and other soluble plant solids, it turns out that the cooking liquid of beans functions an awful lot like eggs. It can emulsify, foam, bind, gelatinize, and thicken. While most of its properties mimic the white, it has some effects of the yolk as well.

The name aquafaba was coined by Goose Wholt, a newly vegan software engineer from Indiana and leader of the community that first started experimenting with the liquid. 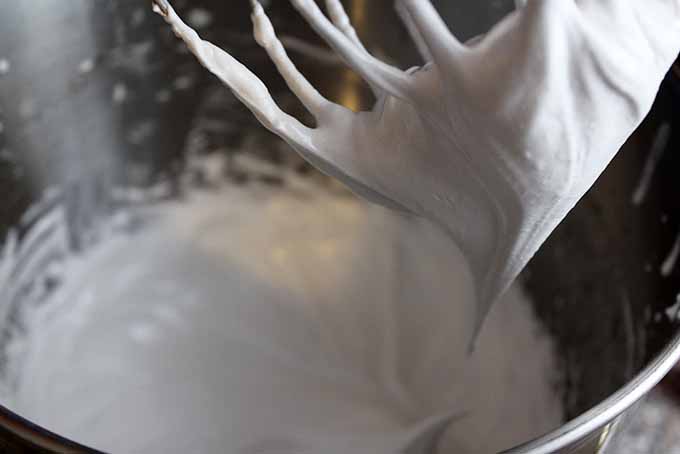 The inverse of the Latin words for bean and water, the name rolls right off the tongue (and sounds a touch more appetizing than bean juice).

The ingredient has been popular on the vegan scene since early 2015, when a group of Facebook users collaborated to test its limits. A high-end mayonnaise company grew intrigued and developed vegan Fabanaise, now available in specialty grocers across the United States. Popular food bloggers soon joined in the game, and now this handy alternative is becoming mainstream.

Eager to join the ranks of these food science detectives, I jumped onto their forum boards, made a big pot of hummus, and started to play. 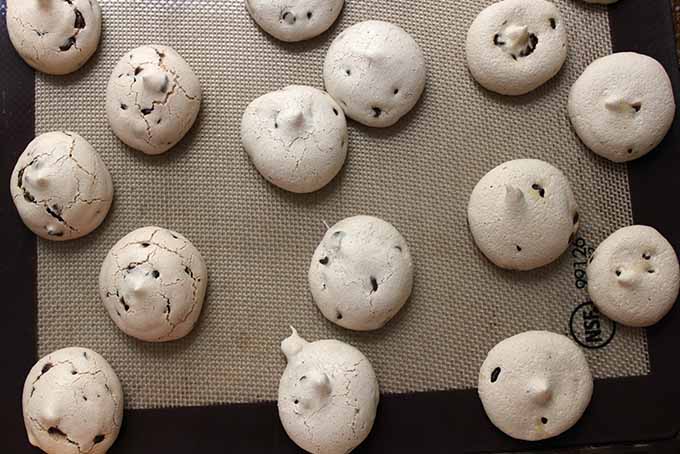 The exact science of aquafaba is still unknown. Recent research reveals that it is made up primarily of starches and proteins, but the exact composition is still being studied in order to understand why it behaves the way it does.

The liquid reserved from most types of beans is said to function in similar ways. Because of its more neutral flavor, the liquid from chickpeas has been the most popular form used.

I decided to test it out as a direct substitute in a series of recipes that feature different properties of the egg. Can it whip like a meringue, or emulsify like a yolk? Can it leaven in baked goods, or coagulate in a curd? 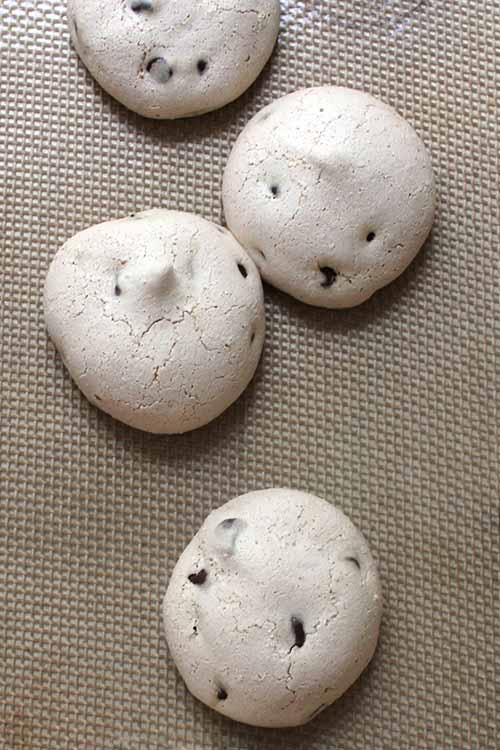 Are you curling up your nose yet? Chickpeas in my cookies!? No. Thank. You.

Trust me, I was skeptical too, at first. It took great bravery to swallow that first bite. But thinking back to the summer I spent nannying a child with a dangerous egg allergy, I conquered my fear of the flavor.

And let me tell you, this stuff is revolutionary.

“Were having falafel for dinner tonight!” I announced to my roommates, who were already full from an abundance of hummus.

I’m not used to the chickpeas themselves being seen as the usable “waste.” But my first step in decoding this magical ingredient was testing out the best method of acquiring it in the first place, and with that came mountains of chickpeas for dinner. 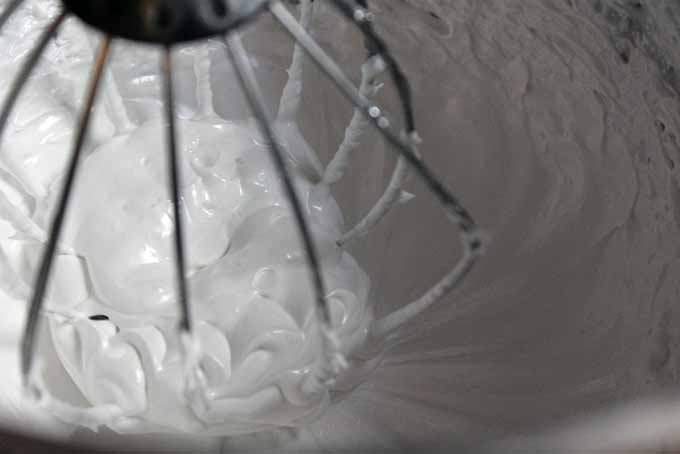 Turns out you can make the A.F. yourself, or just use the stuff that’s left behind in your cans of beans!

In my experiments, both varieties behaved the same way, regardless of their provenance – just be wary of the sodium content. If you’re going for the canned option, be careful to look for low-sodium varieties. Salt-free is your best bet.

Here’s how to make your own: Soak four cups of dried chickpeas in three quarts of water overnight. In the morning, pour the beans and soaking liquid into a slow cooker along with three more quarts of water. Let this cook on low for 8-10 hours.

When the beans are cooked all the way through, drain off the cooking liquid and let it cool. This is your aquafaba.

Some Aquafabers suggest boiling the liquid – whether from a can or made on your own – until it achieves the same viscosity as egg whites.

My first test was making meringue – could anything ever whip up as light as a white? 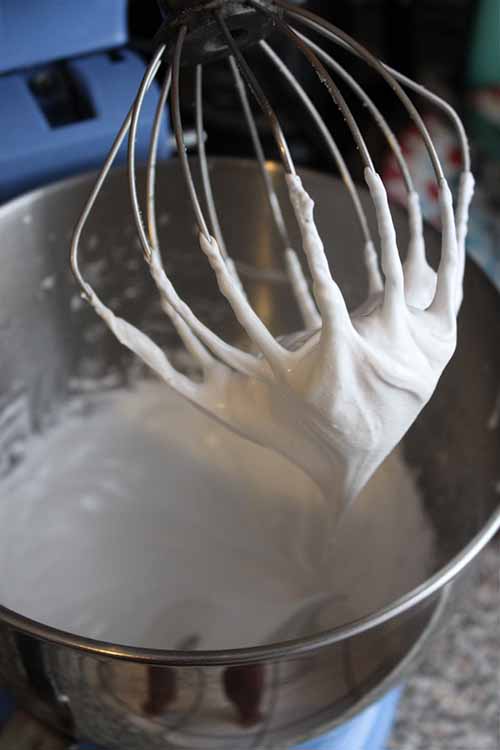 Turns out, it can!

I followed my favorite recipe for chocolate chip meringues, making batches from egg whites, canned aquafaba, and my homemade liquid side by side. You’ll need a trusty stand mixer or be prepared to develop your arm muscles using a whisk manually! 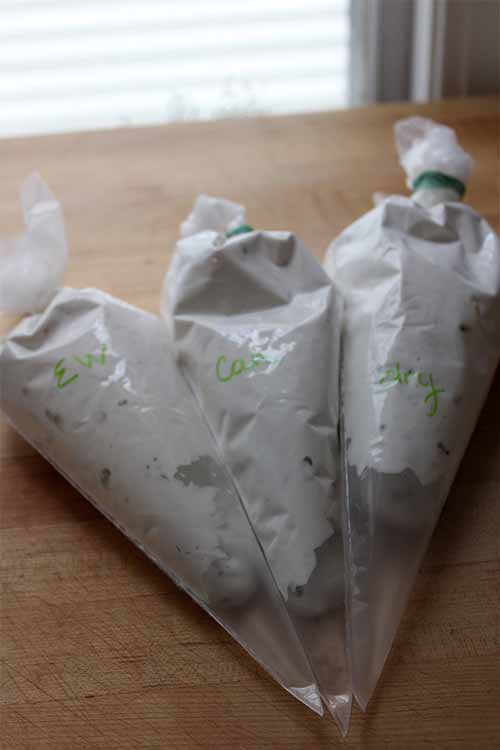 While the A.F. produced a hollower cookie, the flavors were identical. Not a hint of beany aftertaste.

Get the recipe for these delicious aquafaba no-egg meringue cookies now!

The next test was emulsification.

Yolks play an important role in the making of mayonnaise – when combined with salt and acid, they can hold a significant quantity of oil and air to create a light spread. The incorporation of these fats into a smooth sauce is called emulsification. 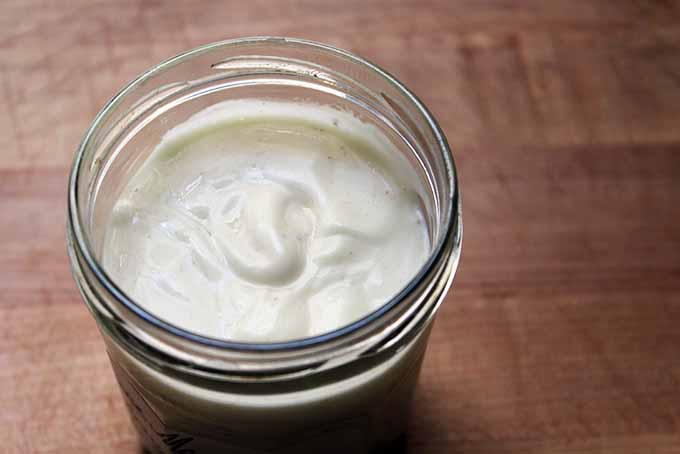 So I tested out my favorite recipe, subbing A.F. for eggs, and it turned right into a shiny, thick spread that could fool the palate of any mayo fan.

Get the recipe now! And try a spicier version, a creamy chipotle aioli with a punch of spice!

With every test exceeding expectation, it was time to move on to something a little bit more tricky: baking. 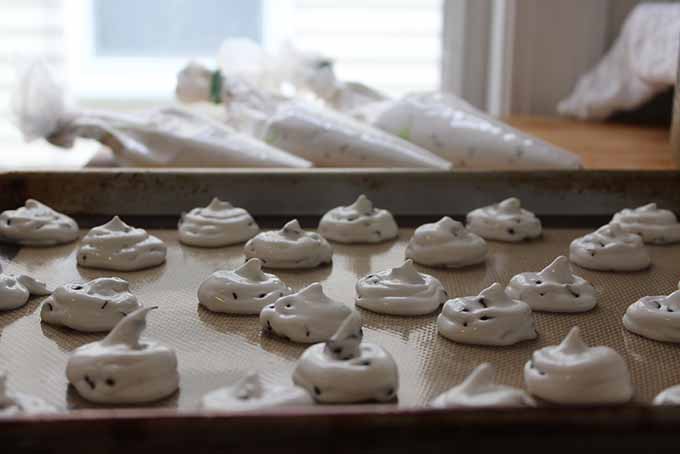 Would my newfound friend be able to bind and leaven in a simple quick-bread recipe?

I tried out a loaf of zucchini bread, substituting 1/2 cup of liquid for the 3 eggs, and the results were once again a surprise.

The flavor of the bread was impeccable, and the texture quite nice as well. It was a bit more crumbly than when made with eggs – suggesting the binding power is not quite as strong – but a success nonetheless.

Get even more tips and tricks with our article on egg-free baking! Aquafaba is one among the many methods available that will help you make delicious goodies without eggs.

Alas, it was time for the final experiment: making an egg-free curd. Unfortunately, this was an utter failure.

It turns out the most important difference between bean juice and an egg is the coagulation of proteins with heat. Since the structure of a curd is created through the interlocking of protein strands, this difference proved to be aquafaba curd’s fatal flaw.

The full potential for aquafaba is, as of yet, unrealized. Because its chemical structure has not yet been fully decoded, it maintains an air of mystique.

Developing recipes requires a commitment to that age-old mantra, if at first you don’t succeed try, try again.

If you are interested in joining along with the leagues of cooks testing the ingredient out, just find the Facebook group “Aquafaba Everything.” Read about other’s adventures and upload recipes of your own.

Or if you want to stick to what’s already been tested, try my meringues and mayo! 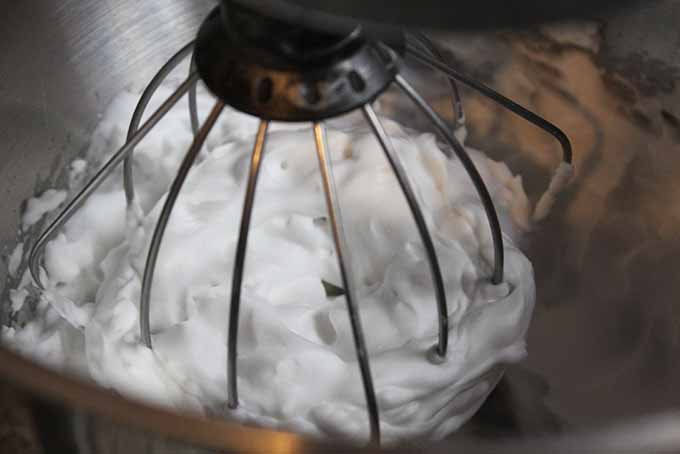 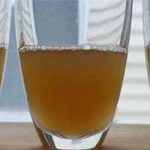 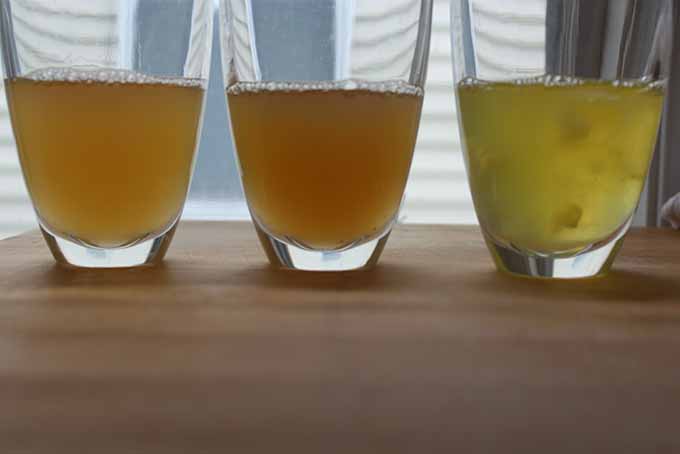 Cooking by the Numbers..

Soak your chickpeas in 3 quarts of water overnight. I do this in a half-gallon mason jar.

The dried chickpeas will expand to about double their size, soaking up the majority of the water in the jar.

Pour the beans along with any remaining water into a slow cooker, and let it cook on low for 8-10 hours.

This can also be done by simmering the beans on the stove for an hour and a half, but cooking in the crockpot reduces the chances of accidentally boiling off all of your liquid gold!

Strain out the beans (if you’re looking for suggestions on what to do with them, try out this delicious soup!) and let the remaining liquid cool. If the cooled A.F. is about the thickness of egg whites, it’s ready to go.

Either use it right away, store it in the refrigerator in an airtight container, or pour it into ice trays and freeze.

If your A.F. is running a bit thin, just pour it into a large pot and boil on medium-high heat for 5-10 minutes. Watch the pot closely, as you don’t want to let it reduce too far – reducing by about a quarter should suffice. It will run a touch thicker once cooled.

Are you brave enough to test new limits with the juice of a bean? Could this eggless wonder be the key to new culinary adventures for you? Even if you’re wary, I encourage you to try it out – I promise you’ll be amazed at the results.

Get to know the garbanzo even more by reading our article all about this cute bean!

Let us know in the comments what types of recipes you’d like to see, and be sure to share your own aquafaba success stories!

Unless otherwise noted, photos are by Kendall Vanderslice, © Ask the Experts, LLC. ALL RIGHTS RESERVED. See our TOS for more details. 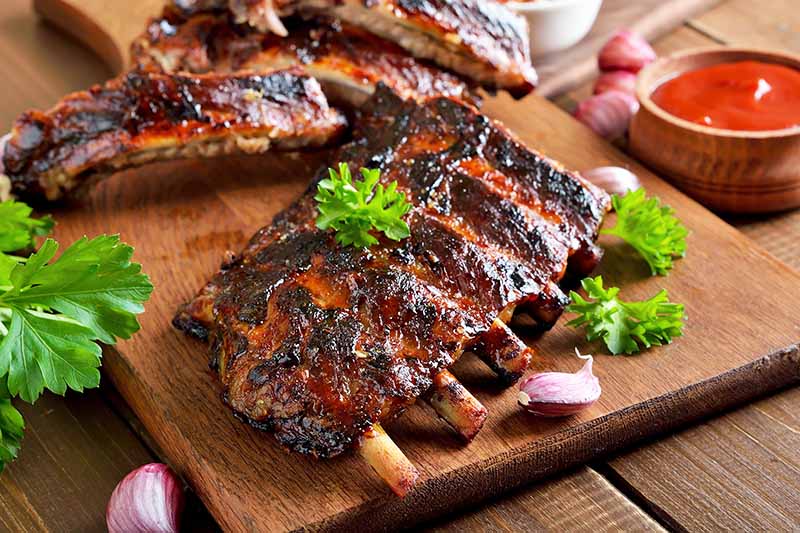 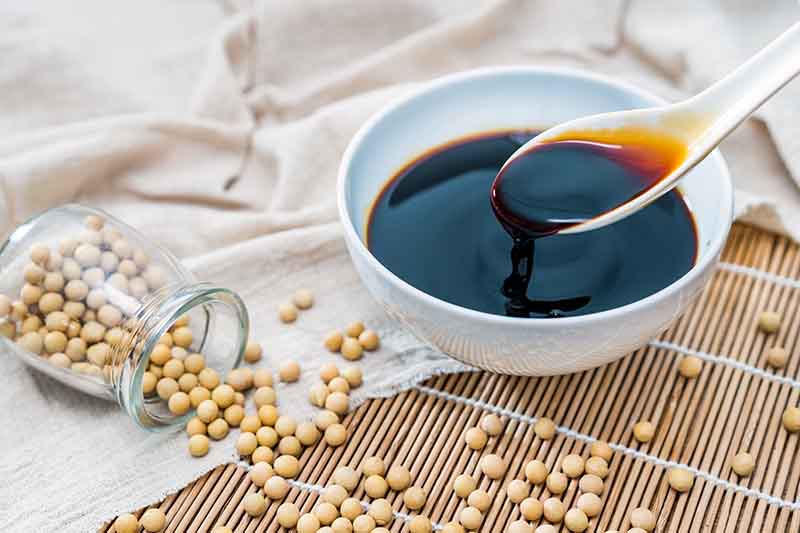 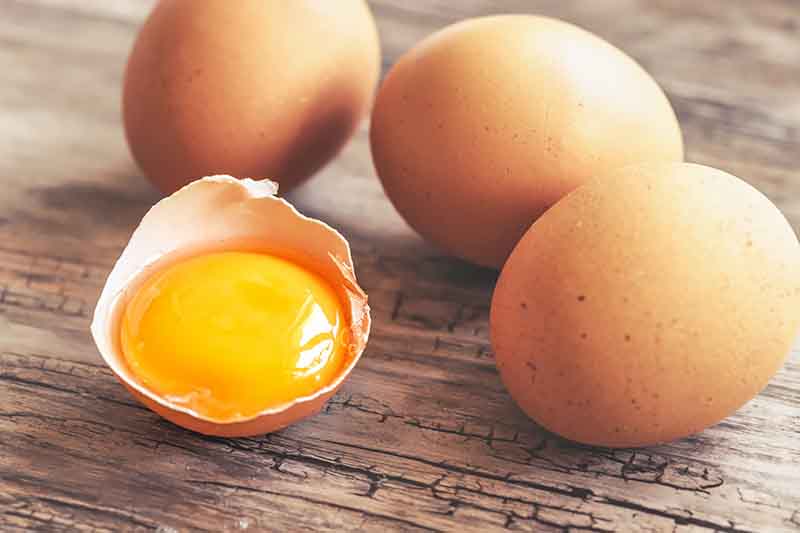