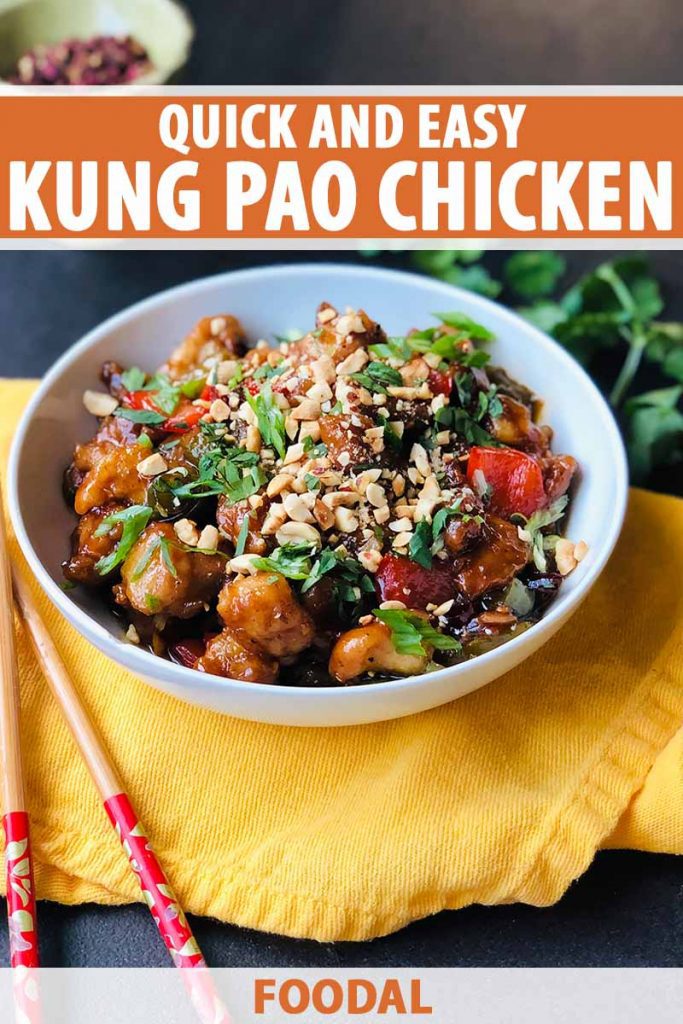 I am obsessed with flavors that smack me in the mouth. 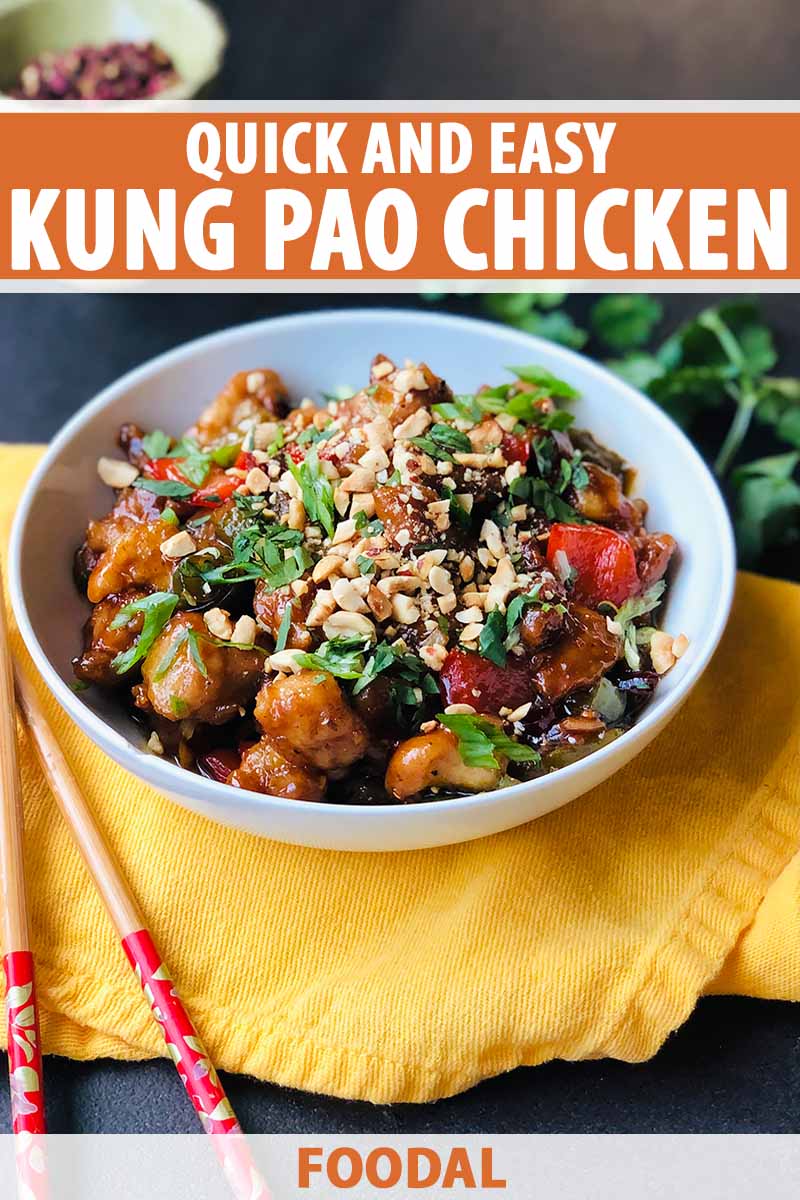 Aggressive as it may sound, it’s the truth. If an ingredient comes knocking on my taste buds and doesn’t show up with a bang, I’ll escort it right back out the door.

I want my savory foods rich and buttery, my snacks sharp and cheesy, and my wines so tannic and bold they make my jaw muscles flex. So you can imagine that when I met the Szechuan peppercorn, it was the beginning of a beautiful friendship.

And as it turns out, our encounter almost never took place.

Back in the 1960s, the FDA made it illegal to import the spice because of its potential threat to the American citrus industry. The prickly ash trees which spawn the berries can carry a bacterial canker known for being harmful to other plants in the citrus family, so as a precaution, a ban was set in place.

Luckily, in 2004, the US government partially rescinded the restriction and began allowing the import of peppercorns that had been heated first, a solution that killed the bacteria.

Let’s take more of a deep dive into where these peppercorns originate.

They’re produced from the husks of seeds of one of two species of the Chinese prickly ash shrub, in the Zanthoxylum genus – aromatic, spiny small trees in the citrus family that shed their leaves annually.

Psst. Don’t tell this to the sassy peppercorn, but it’s actually not a “pepper” after all.

It’s those pinkish-red husks that cloak the inner black seeds which are the stars of the show, often toasted and ground or used whole. Versions sold whole and seeded are often lower-quality, as they contain stray twigs and broken pieces as well. 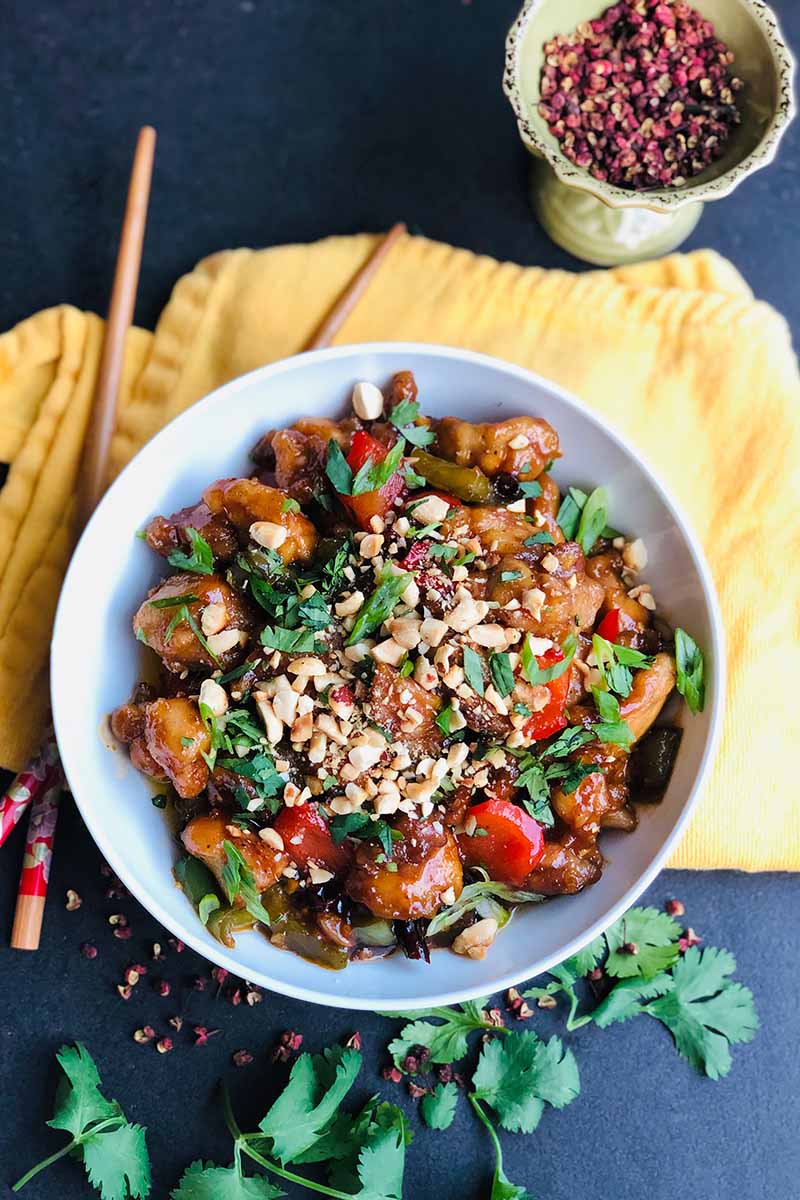 A word to the wise: Though it’s a common misconception that Szechuan peppers are long slender peppers (like a cubanelle or jalapeno), they’re actually berries.

Their fragrant umami flavor and mouth-prickling zing give kung pao chicken its signature flair, and give me all the good feels.

Though it might seem intimidating to make at home, the method of preparing this Chinese classic follows a similar pattern to many other stir-fry-type dishes.

There’s a protein (chicken, in our case) which gets tossed in cornstarch and shallow fried in oil, giving it a light, crispy coating.

Then the veggies are added, then the sauce, and then we eat.

The main difference with this particularly delicious meal is that the cornstarch is joined by piney, citrusy Szechuan peppercorns whose attitude is only enhanced after being toasted and crushed. This step softens the citrus notes and brings out the woodiness, which makes the flavoring an ideal companion for meat.

Now, back to your regularly scheduled recipe.

Once the juicy nuggets have had their turn in the hot oil, in go the peppers. Green and red bells bring some sweetness and texture while dried chilies carry the heavy-handed heat.

If you can get your hands on dried Chinese red peppers (aka Tien Tsin, Tianjin, or facing heaven chilies), well, that’s what’s up. Way to go! 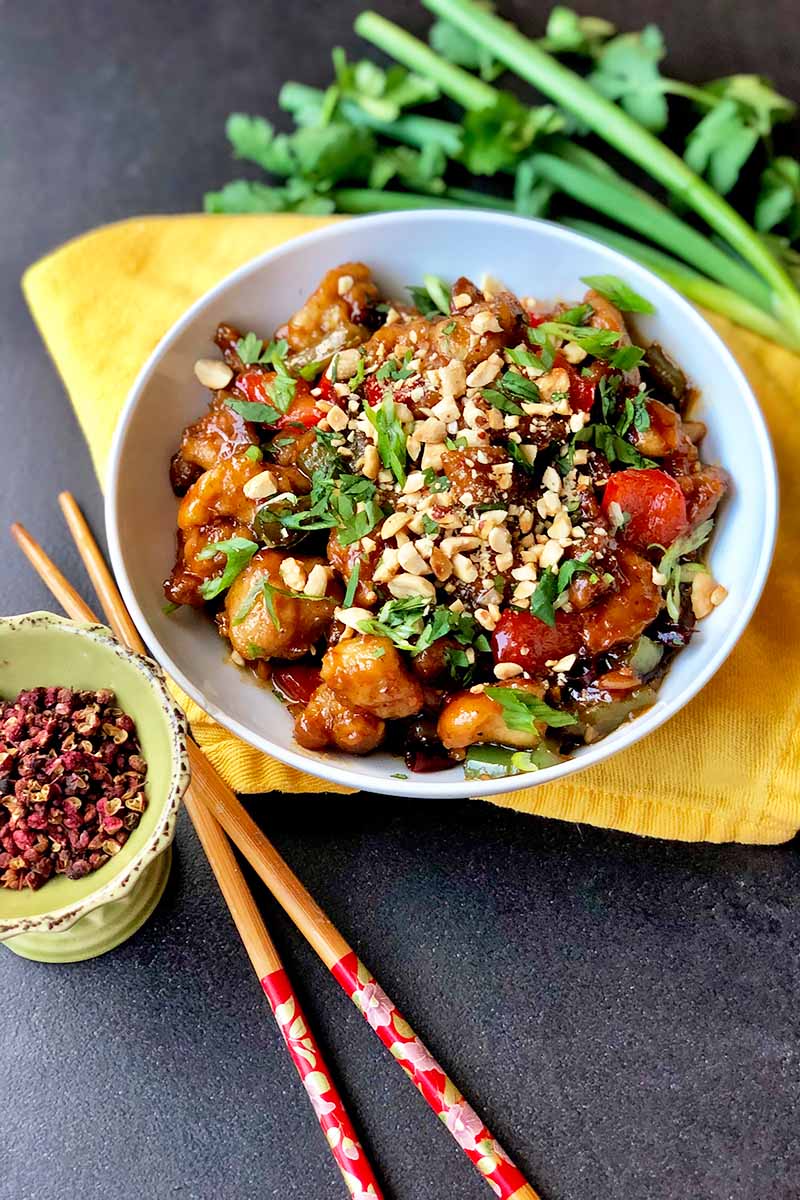 I find grassy, dried chiles de árbol much easier to locate in my neighborhood, not to mention, similarly pungent. Though, if both were within arm’s reach, I’d go for the Tien Tsin, which packs a slightly more fiery jab.

When it comes to the spice level, that’s a personal preference. I recommend removing the seeds of whichever dried chili you opt for – which can be shaken out after removing the stems – as those suckers will blow your lid right off.

Mild to medium heat is spot on for my palate, so I use around 6, depending on their size. For the real deal, feel free to throw in up to 12. Just make sure you have a couple cold beverages nearby and a bucket of ice to dunk your head in after the first bite.

Once the peppers, plus ginger and garlic, have taken a ride through the flavor bomb the chicken left for them in the ring, the veggies and aromatics head to their corners so the sauce can make its way to the arena.

Thick, dark soy, a splash of acidic rice wine, and sticky honey come together to create a salty, slightly sweet mixture that coats every crevice of the chicken.

Chopped peanuts come in at the end for crunch, and cilantro’s fresh, fluffy leaves add brightness and mimic the citrusy flavor of the Szechuan peppercorns we learned so much about from the get-go.

Hungry? Well, what are you waiting for? Grab those chopsticks and let’s wok it out.

Skip the takeout and try this kung pao chicken. Our speedy stir fry packs a punch with citrusy Szechuan peppercorns and fiery chilies.

In a small bowl, make a cornstarch slurry by vigorously whisking together 1 tablespoon of the cornstarch and the stock. You can substitute water, but the stock adds more flavor. 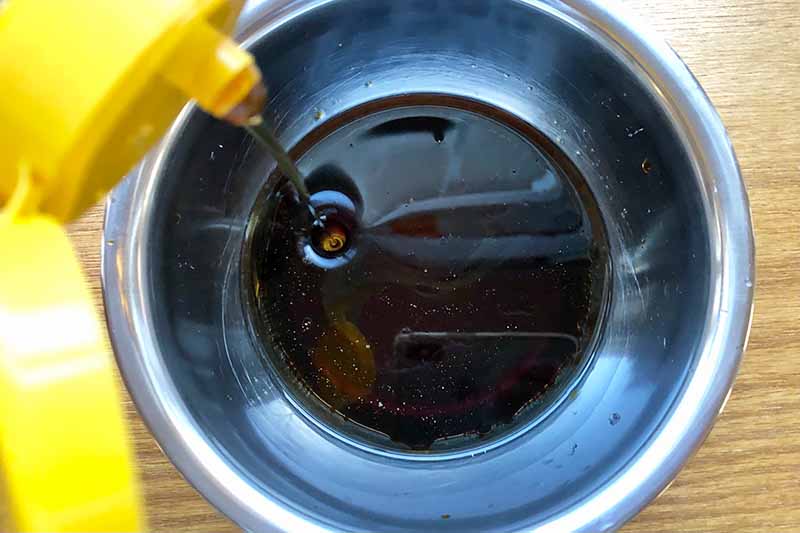 In a separate small bowl, whisk the peanut oil, soy sauce, dark soy sauce, Chinese Shaoxing rice wine, and honey together to make the sauce for the dish. Set aside.

Dark soy is slightly sweeter, thicker (thanks to the addition of molasses or caramel and cornstarch), and aged longer than regular soy sauce.

Any variety of rice wine will work here. Chinese Shaoxing wine is just the most famous variety that is widely used, but you can feel free to use mirin or dry sherry instead, if you can’t find it.

In a dry wok (or large skillet with angled sides) over medium heat, toast the Szechuan peppercorns until fragrant and lightly golden, about 1 minute.

Using a mortar and pestle or rolling pin, grind the peppercorns into a fine powder. 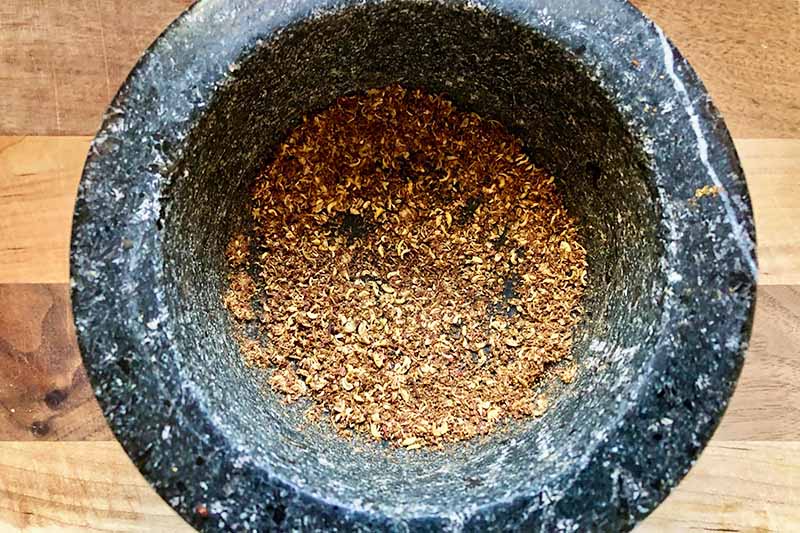 Cut the chicken into bite-size cubes. 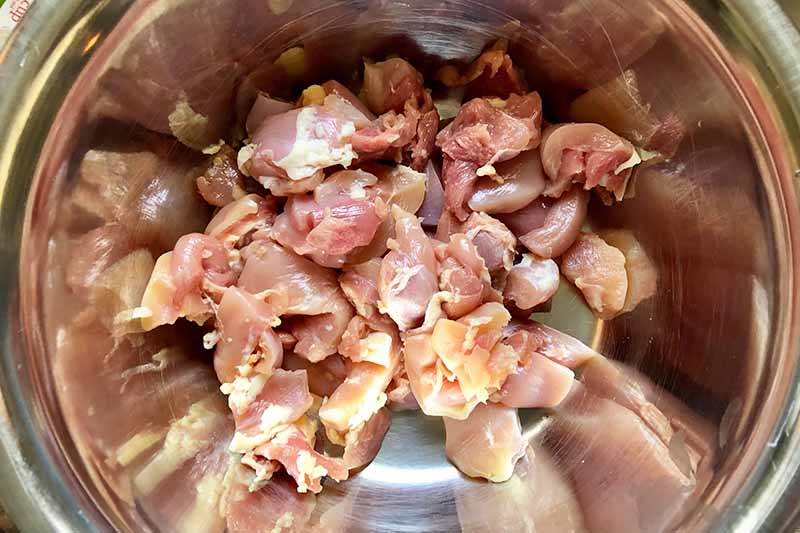 In a large bowl, combine the toasted ground Szechuan pepper and the remaining 4 tablespoons cornstarch. Toss the chicken in the cornstarch mixture until each piece is thoroughly coated.

Step 3 – Toast and Chop the Peanuts

In a dry pan over medium heat, lightly toast the peanuts, tossing occasionally until golden brown and fragrant, for about 4-5 minutes. 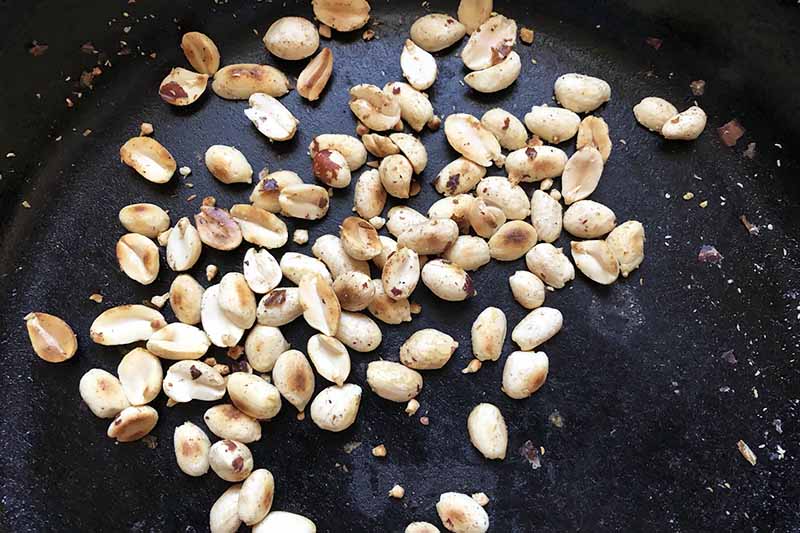 Remove from the pan. Rough chop and set them aside.

Step 4 – Prep the Peppers and Cook the Chicken

Remove the stems from the dried chilies and shake out the seeds, pinching and rubbing the pepper between your fingers if necessary to extract as many as you can. Cut into 1/2-inch pieces.

Mince the garlic and ginger. 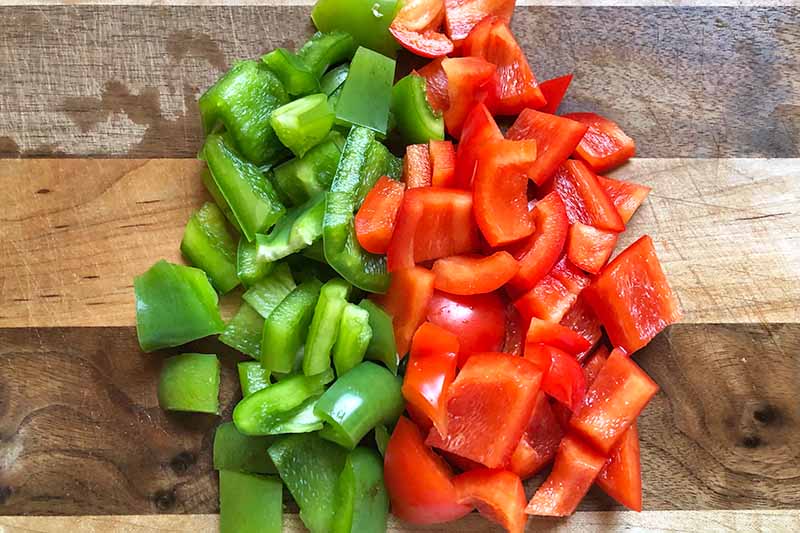 Prepare a paper towel-lined plate to soak up the excess oil from the cooked chicken. 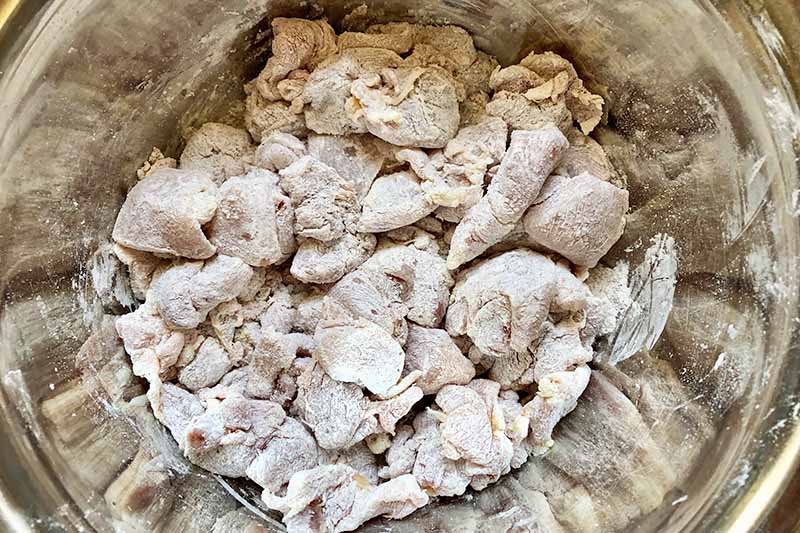 Heat the wok or skillet over medium-high heat and add the cooking oil, using peanut oil if you have enough on hand. When it begins to shimmer, add the chicken and fry, tossing occasionally, until cooked through, about 6-8 minutes. 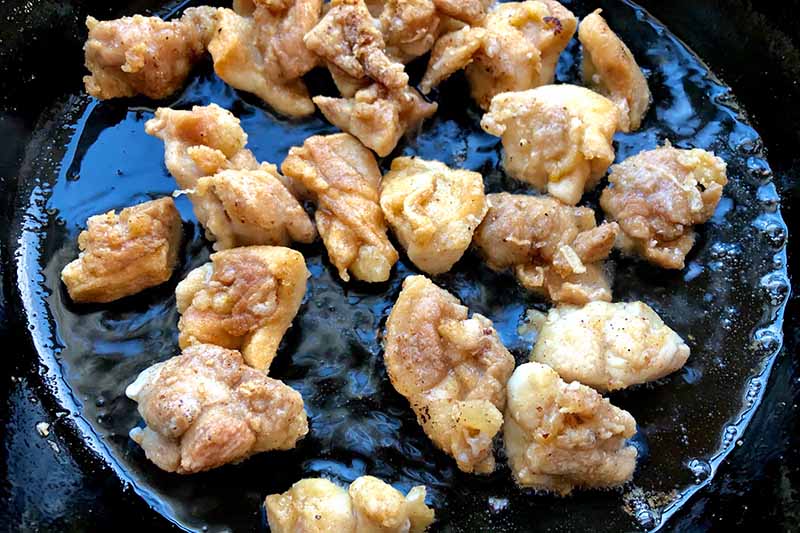 Work in batches so you don’t crowd the pan. Remove the chicken with a slotted spoon and place on the paper towel-lined plate.

Step 5 – Cook the Peppers and Aromatics

Pour off all but about 2 tablespoons of the liquid in the pan and lower the heat to medium. Too much leftover liquid will steam as opposed to sauteing the peppers, and you want them to be crisp-tender, not soggy. 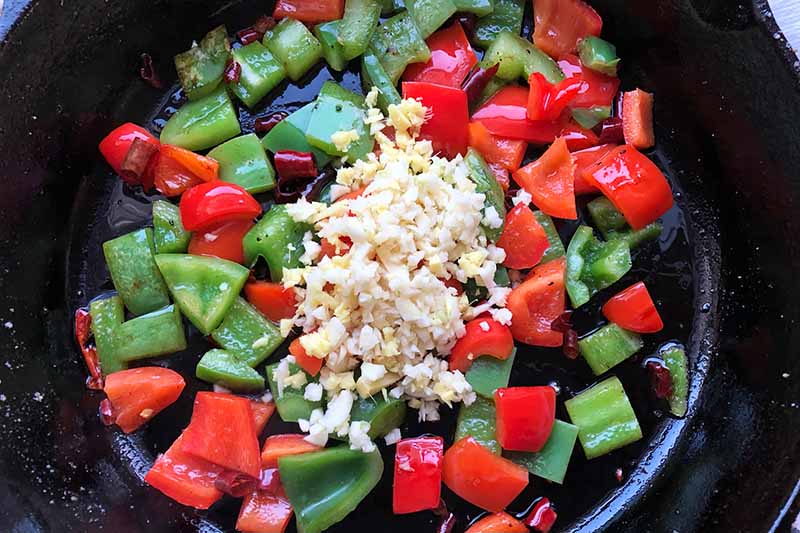 Add the red and green bell peppers and the dried chilies. Saute until lightly golden, about 2 minutes.

Chiles de árbol produce a medium-high heat (about 6-7 on a scale of 1-10), so using 5 or 6 in this dish (about 3 tablespoons) will produce a mild level of spiciness.

Stir in the ginger and garlic, and saute for one additional minute.

Step 6 – Pour in and Thicken the Sauce

Move the peppers to the perimeter of the wok, and then pour the soy-honey sauce in the center of the pan. Bring to a boil, and then stir in the cornstarch slurry. 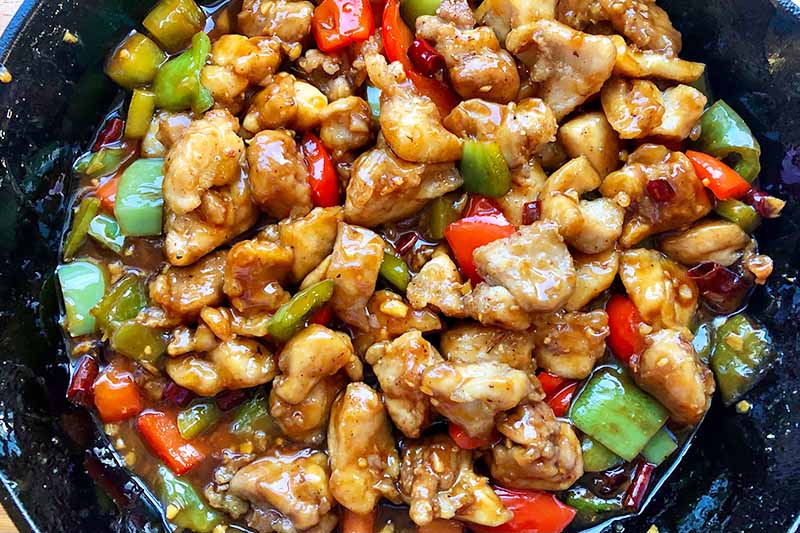 Once the sauce has thickened, after about 1 minute, return the chicken to the pan.

Toss the chicken and veggies until they are heated through and coated with the sauce. 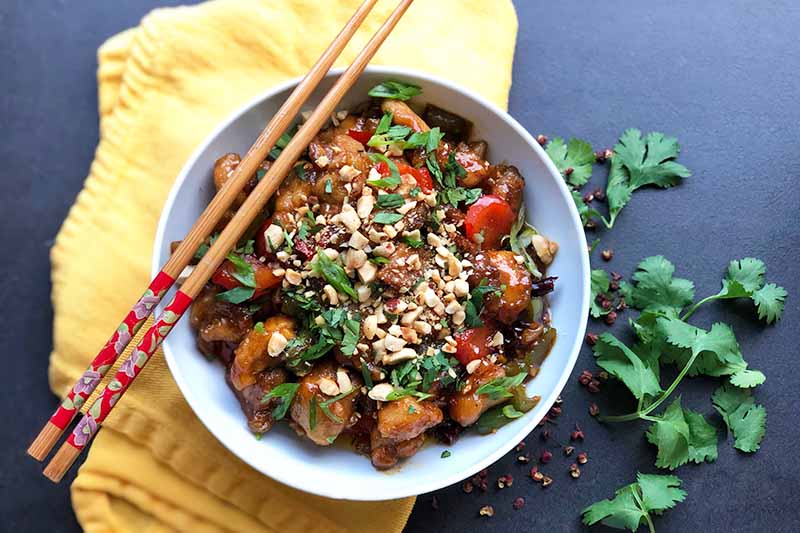 Divide the kung pao chicken among plates and garnish with the toasted peanuts, green onions, and cilantro.

When it comes to making your own takeout, the benefits are as fruitful as those zesty peppercorns that kicked off this story. In addition to adjusting the heat level to your personal preference, you can even tinker with the accompanying flavors. 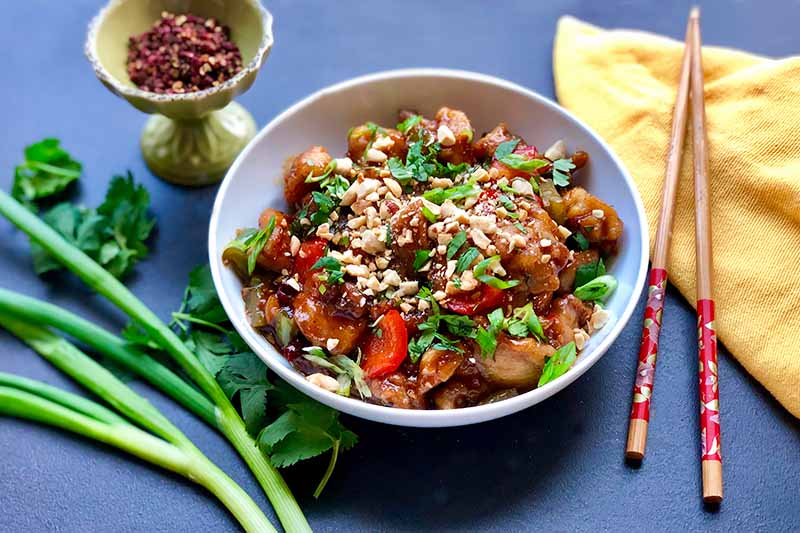 Sweet, grassy bell peppers may be the standard for American-style kung pao, but throw in some oniony shallots, shiitakes for an earthy bite, and broccoli for its bounty of nutrients, and you’re on your way to straight vegging out.

Jasmine rice is a pro partner for soaking up tangy sauce, but when I’m feeling bold, I toss cooked lo mein noodles straight into the pan for a hearty feast.

In the mood for more quick and easy Chinese-inspired creations that are even better than their takeout counterparts? Add these tasty ideas to your recipe lineup:

Will you boost the burn with more chilies or keep things mild? Share your spice preferences in the comments below! And don’t forget to give this recipe a five-star rating if you loved it.

Photos by Fanny Slater, © Ask the Experts, LLC. ALL RIGHTS RESERVED. See our TOS for more details. Originally published by Lorna Kring on May 7, 2015. Last updated on May 27, 2021. 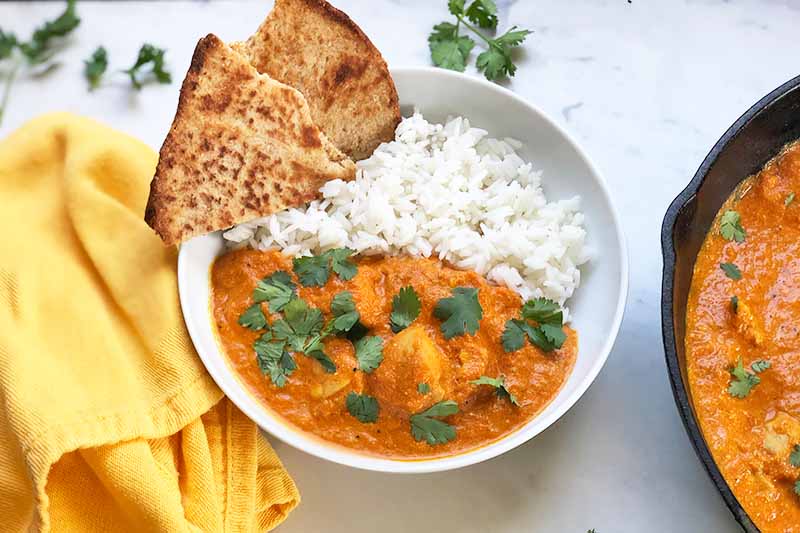 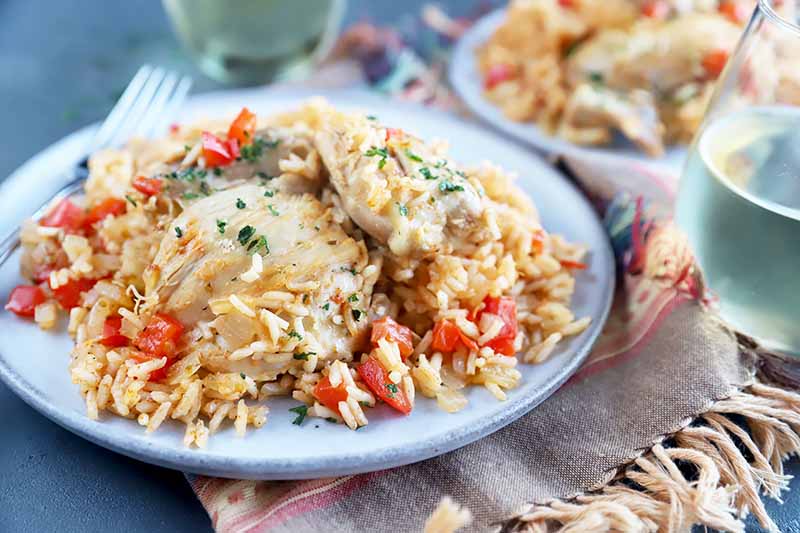 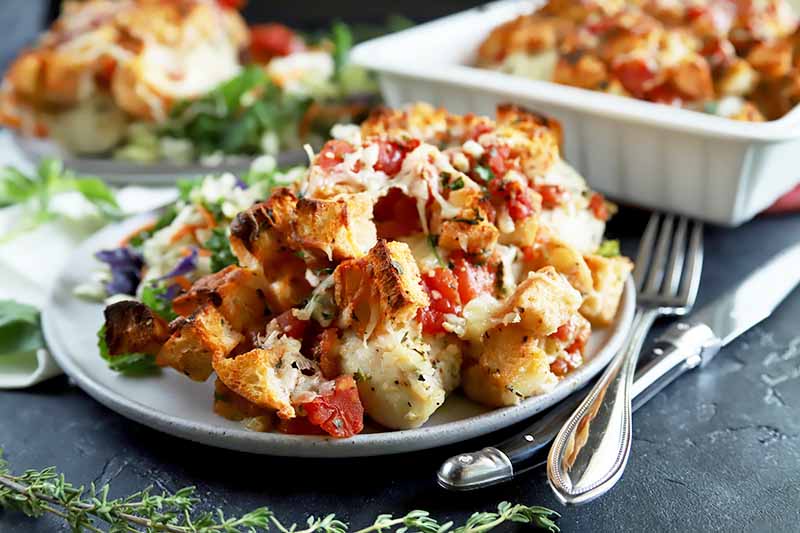