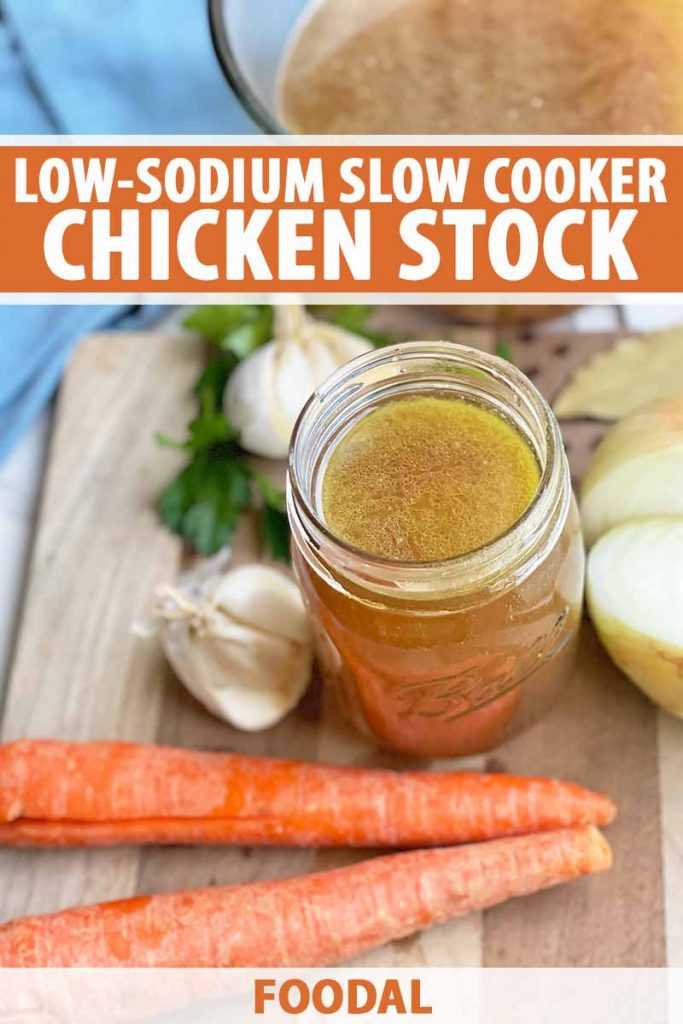 Sometimes I am straight up fascinated by technology. 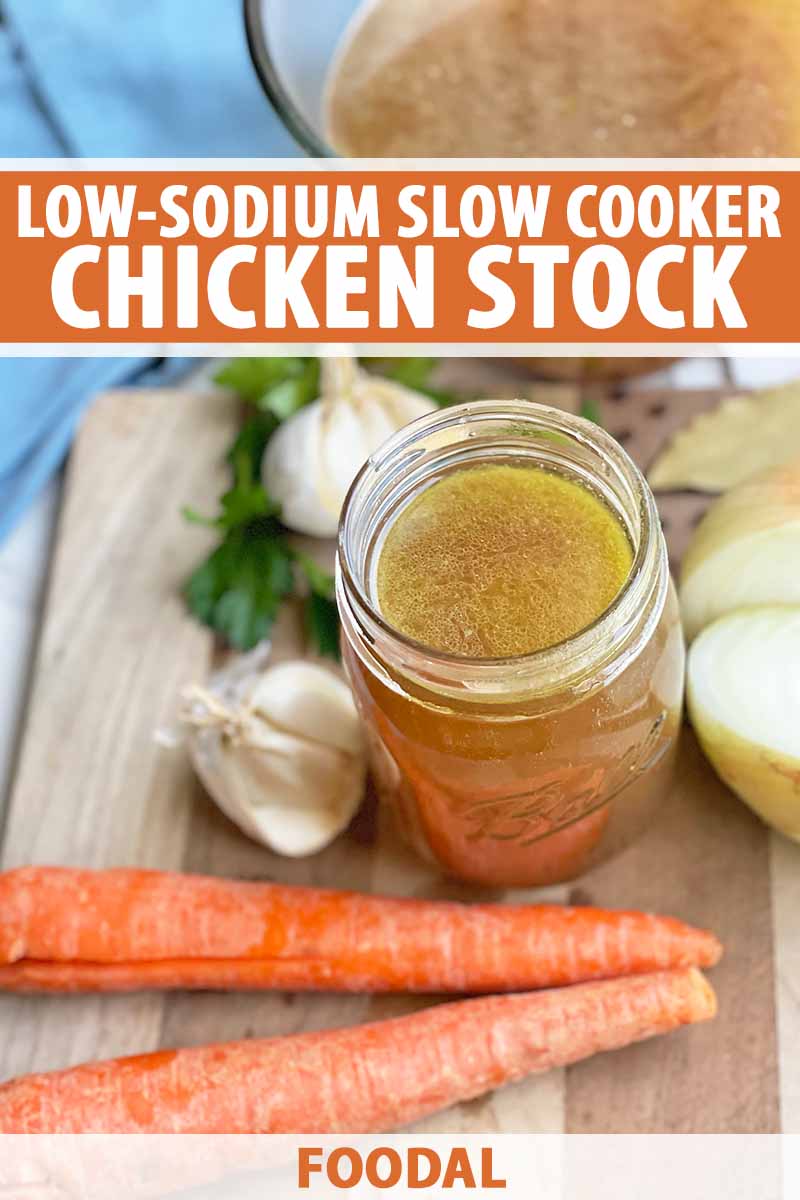 A great example: the scene in one of my all-time favorite flicks Julie & Julia which portrays both modern food blogger Julie Powell and culinary legend Julia Child simultaneously cooking recipes from Julia’s famed cookbook, Mastering the Art of French Cooking.

Which would make a perfect holiday food read for your favorite foodie, but we can discuss that another time!

Depicted in the present (well, the early 2000s), Julie taps the button of her food processor with ease, while a parallel Julia is shown vigorously mashing ingredients by hand with a mortar and pestle decades earlier.

I’m not a fan of kitchen “gadgets” per se (pretty sure I can slice my own apples and avocados, thank you very much), but some items undeniably make a home cook’s life easier. And even though slow cookers have been around since the 1940s, there’s still something about the concept of letting a machine do the work that captivates me.

You know… as I sit here in this coffee shop thinking about the spherical two-wheeled robot (dubbed Lord Farquad) that’s currently gliding around cleaning my floors at home. 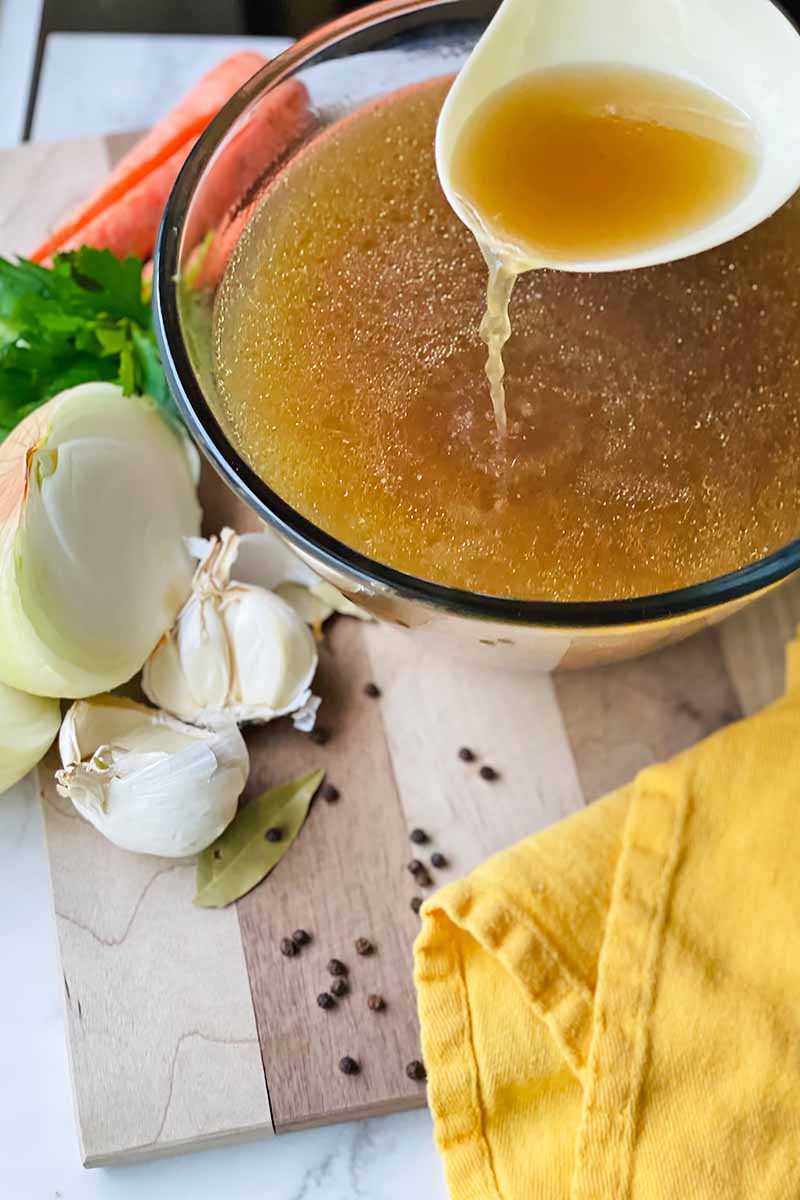 All of this is to say that whether it’s a food processor, slow-cooker, or robot vacuum, any electronic equipment that gives me more time on the couch to eat snacks and watch Grey’s Anatomy gets five stars in my book.

I’m no stranger to making homemade stock that simmers solo for hours. I’m just used to doing it the old-fashioned way: on the stove.

So the idea of plopping a pile of ingredients into a plugged-in device and forgetting about it for awhile is still a little foreign to me, but at least I don’t have to worry about my cat hopping up near a burner that’s on while I’m sleeping.

This recipe calls for at least 8 hours of cooking, though the liquid can quietly rumble away for up to a full day.

So, what did that 24-hour adventure mean for me the first time I followed this method all the way through?

I awoke to the glorious smell of a rich, comforting, chicken-y liquid that I knew was going to be absolutely packed with flavor, and just needed a quick push through a sieve to be complete. 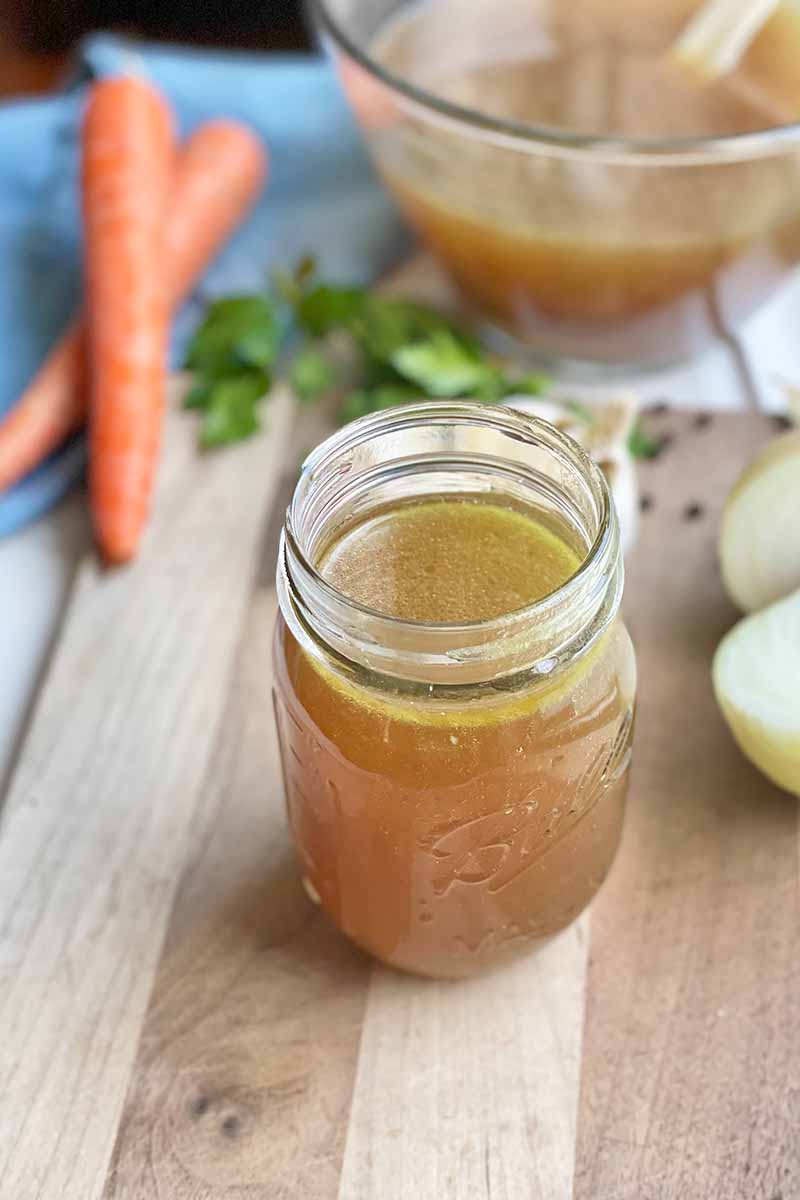 It was as if there was a robot in my kitchen all night, thoughtfully tending to the pot-stirring, skimming foam, and making sure all of the aromatics continued to bubble at a reasonable rate.

Lord Farquad, was that you out there?

This recipe also boasts the advantage of having full control over everything that’s being extracted into your stock, from the sodium level to the overall flavor.

Not even a pinch of salt is added in the cooking process, as I want the end product to be as versatile as possible for future cooking. I can adjust the salt level depending on what I’m making.

For example, if I’m using my scratch-made stock in an Asian-inspired dish that will contain soy or fish sauce, it’s important that the brininess of the base be especially subtle so the overall salt factor of the finished dish isn’t overwhelming. 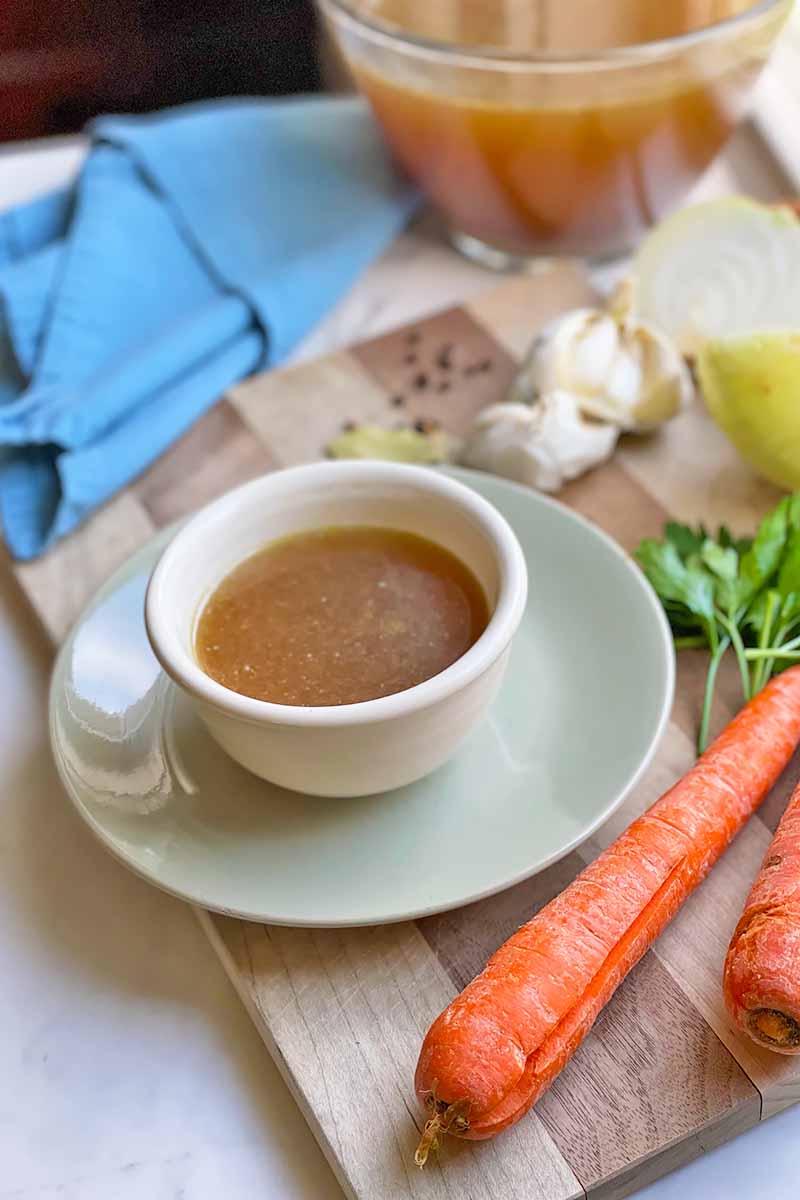 Occasionally, I slip in a knob or two of fresh ginger to add a little spiciness. The pungent root is also a superb home remedy for stomach issues, so keeping a ginger-infused stock in the freezer during cold and flu season is a secret of mine that you can absolutely steal.

There are some quality store-bought stocks on the shelves these days, don’t get me wrong. But a steadily simmered, homemade version is always more robust and – let’s be honest – overflowing with love.

The longer you let it go, the more intense the flavor becomes. All that’s required of you is some chopping, straining, and a little patience.

So go on, let your slow cooker do the work. Medical drama reruns are waiting.

Made with flavorful aromatics and chicken bones, homemade stock is an intensely-flavored liquid that’s practically effortless to prepare in the slow cooker.

Separate the white and dark meat from the bones of the chicken if you haven’t already, and set these aside for another use. 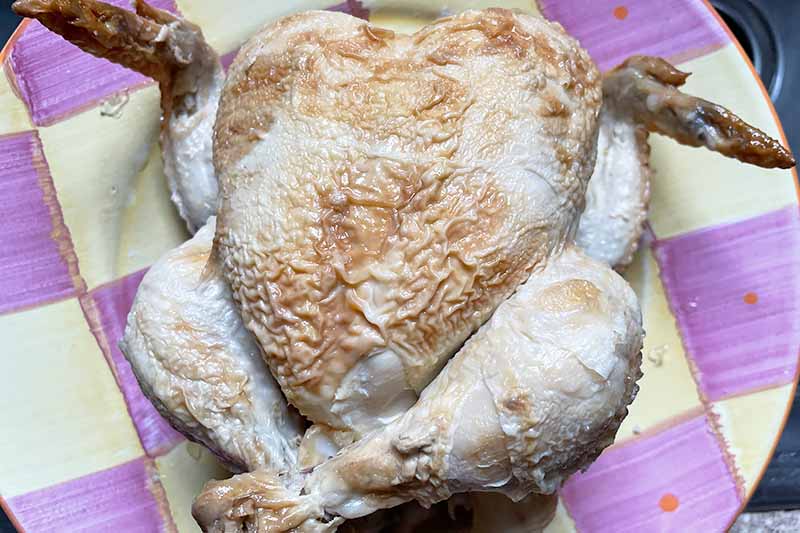 Place the chicken bones or whole carcass in a 6-quart slow cooker or Instant Pot. This size cooker will fit a whole chicken up to about 5 pounds.

Any residual scraps, pieces of skin or meat, drippings, or gelatinous bits can also go straight into the slow cooker.

Roughly chop the onion, celery, and carrots. Gently smash the garlic cloves with the flat side of a large chef’s knife and pinch the skin on one end to slide each clove out. 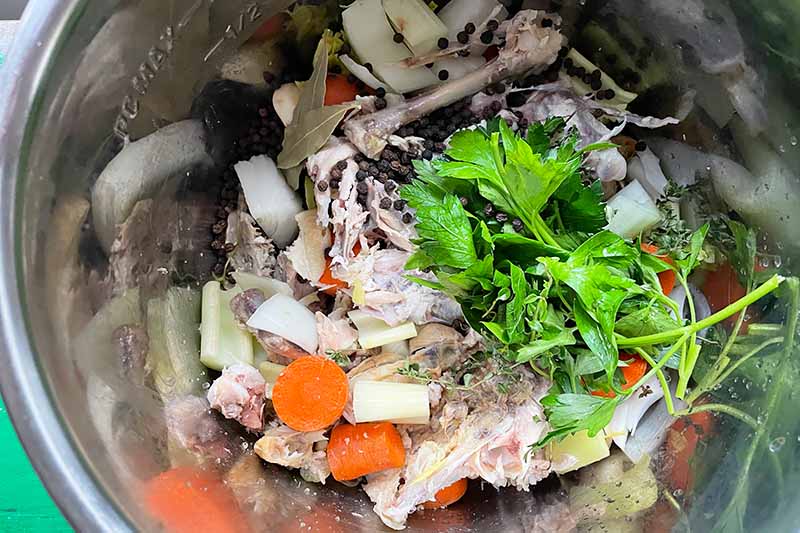 Scatter the onion, celery, carrots, garlic, peppercorns, bay leaves, and herbs around the bones in the slow cooker.

Add water until it covers the bones, and set the slow cooker to low. 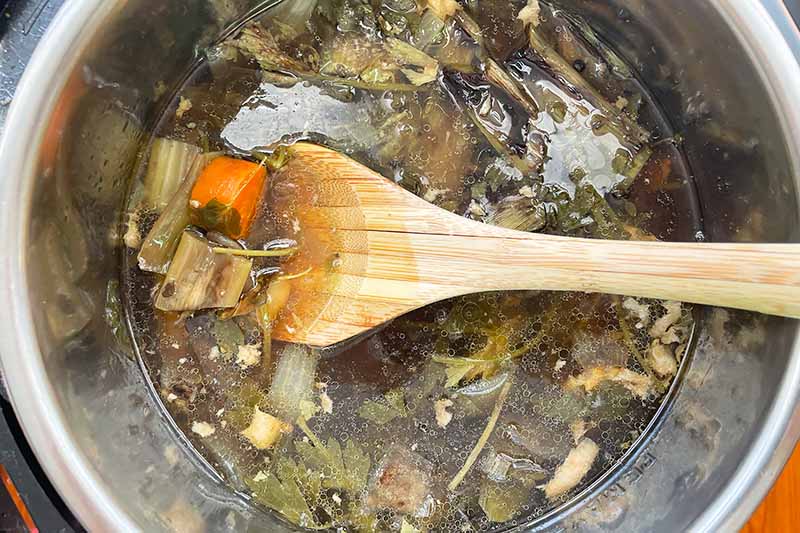 Cook for at least 8 hours, or up to 24, and then allow the stock to cool to room temperature.

Step 4 – Strain and Use or Store

Place a fine-mesh sieve over a large bowl and strain the liquid, pressing on any solid bits to extract as much flavor as possible. For a clearer broth, you can strain the stock again through a piece of cheesecloth. 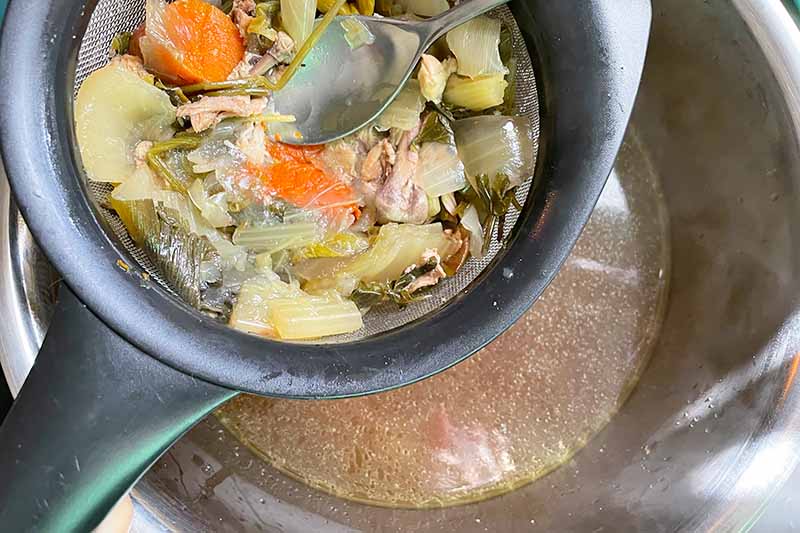 If you want to skim off some of the fat, place the bowl of stock in the fridge. Once it has chilled – which could take up to several hours, depending on the temperature of the liquid – the fat will solidify and rise to the surface.

Use a spoon to skim off as much of the fat as you can. This eliminates an overly oily mouthfeel. 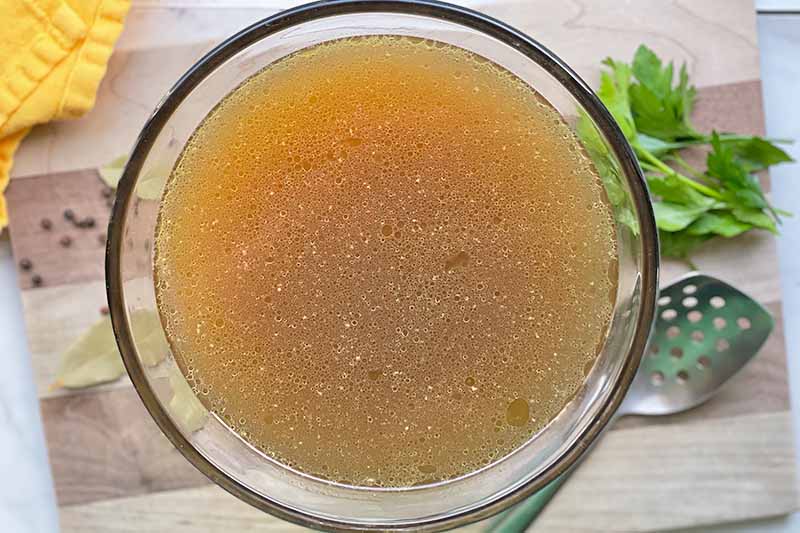 Divide the stock into containers or jars, put the lids on top, and refrigerate for up to 1 week or freeze for up to 6 months.

Remember that liquids will expand a bit when they’re frozen, so leave a little headspace in your containers if you plan to freeze them.

Not Just for Soups

There’s no question that homemade stock elevates soups and stews to the next level, but this recipe makes a luscious liquid that’s far more versatile than that. Here are some creative ideas for how to use it:

Who said rice needs to be made with equal parts water? Swap in this stock instead.

Use it to deglaze your cast iron pan when you make these lemon chicken thighs so you can scrape up every last bit of flavor from the pan.

Splash it into a microwavable mug for a satisfying midday snack that doesn’t even require utensils.

And last but not least, freeze a portion in ice cube trays so you can pop out a tablespoon or two when you need to thin out a sauce, but don’t want things to get watery.

Still on the set-it-and-forget-it train? Same. Jump on these sensational slow-cooked recipes next:

How will you spread the love with your homemade stock? Share your bountiful broth-inspired ideas in the comments below! And don’t forget to give this recipe a five-star rating if you loved it. 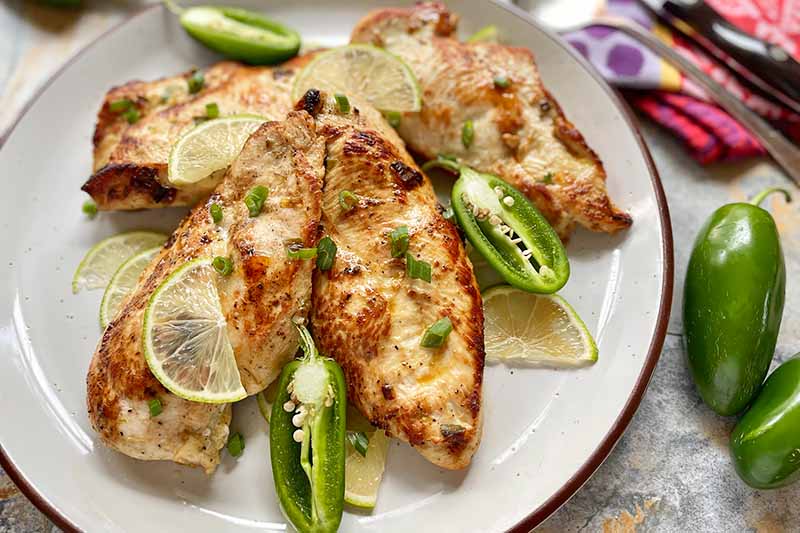 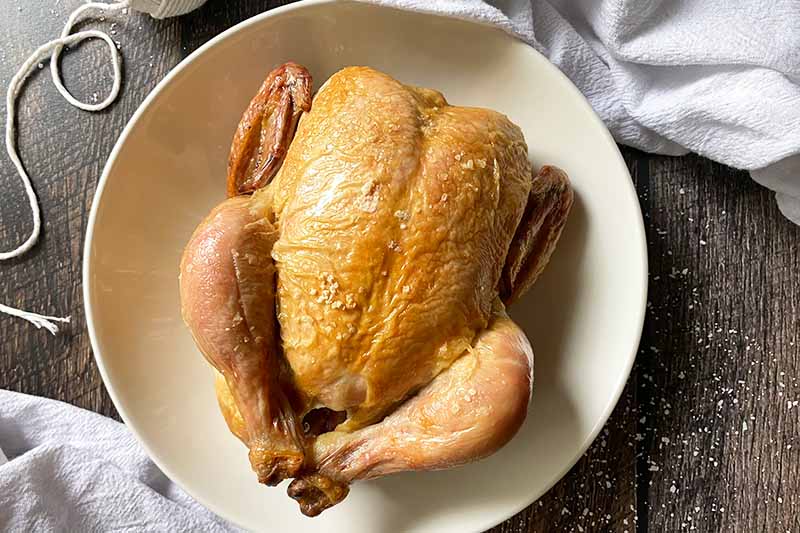