With its distinctive, yet subtle flavor, tarragon plays an important role in the development of many dishes. 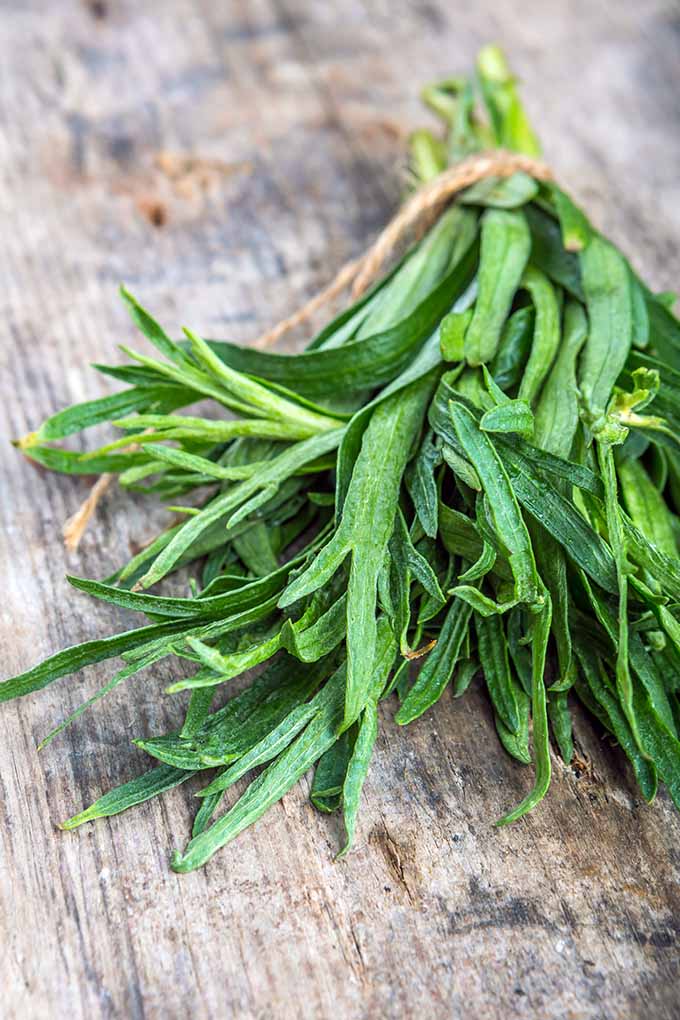 French chefs often refer to it as the “King of Herbs,” and along with chervil, chives, and parsley, it’s one-quarter of the combination known as fines herbes in classic French cooking.

It has a unique, slightly sweet flavor similar to anise or licorice, with nuances of pepper and eucalyptus that make it a stand-alone in the herb world.

Let’s have a closer look at this delicate herb, and some associated health benefits. Then we’ll explore which variety is best for cooking, followed by some suggestions for use in the kitchen.

A member of the Asteraceae or Compositae family, the same as sunflowers, French tarragon is a perennial herb with the Latin moniker A. dracunculus sativa – or “little dragon” – attributed to its twisting, serpentine root growth. 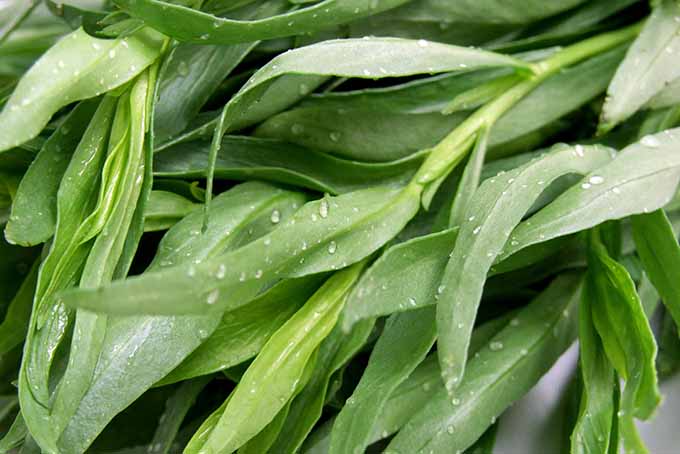 Typical of many Artemisia, it has light green, aromatic foliage with a silver frosting that makes it an attractive and fragrant ornamental border plant, as well as a useful kitchen herb.

Only the leaves are used for cooking, which are delicate, long, narrow, and finely cut – and will leave the tip of your tongue a little numb when chewed fresh.

Native to central Asia, there are many species available. All have a flavor and fragrance similar to anise, fennel, and licorice, but in varying degrees.

French, or “true” tarragon, grows well in temperate zones and is the preferred selection by chefs and cooks in Europe and North America. This is the type that has a semi-sweet flavor and fragrance that most resembles licorice.

Russian, or “false” tarragon, is also from the same genus – A. dracuncoloides pursch, more specifically – and hails from the same regions of central Asia, Siberia, and Mongolia.

The Russian variety looks very similar to its French cousin, but its flavor and fragrance is generally deemed inferior, with a bitter taste and slightly moldy aroma. Plus, its mild licorice tones will fade as the plant gets older.

Due to its easy cultivation from seed, it is used widely for culinary purposes in some regions. The leaves are used to flavor items such as cider, soft drinks, and tobacco, and the stems can be steamed like asparagus. 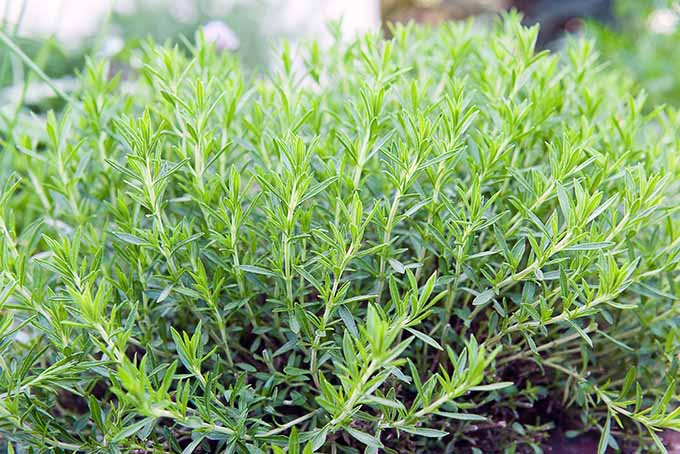 But with its bitter flavor, it makes a poor seasoning substitute for the French variety.

Most grocery stores will stock the fresh French type in the produce section. But if you’re unsure, nibble a leaf between your front teeth. The taste will be sweet, light, and licorice-like, and the tip of your tongue should numb a bit.

Better suited for growing in hot regions, it goes by several names, such as Mexican, Texas, Spanish, or winter tarragon, and Mexican mint marigold.

Native to Guatemala, it too is a member of the Asteraceae family, in a completely different genus than the Artemisias.

T. lucida belongs instead to the genus Tagetes, or marigolds, and its leaves were used by the Aztec people to flavor chocolate beverages. It even puts on a fine show of yellow daisy-like flowers in the late summer and early fall. 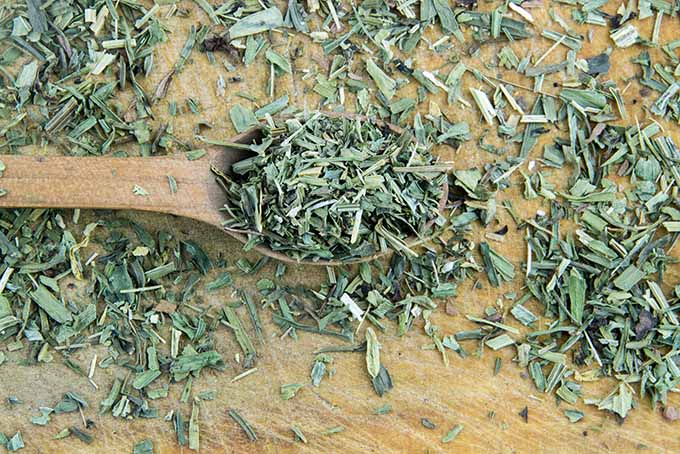 Its leaves are redolent with the anise flavor of the true variety and it makes a much better culinary substitute than the Russian type.

These can be used fresh or dried for their sweet anise flavor in sauces, soups, salad dressings, and pretty much any dish that calls for tarragon would be used in.

And due to its heat-loving nature, it thrives in the summer when the French variety begins to wilt and weaken.

Like many spices and herbs, this aromatic herb is rich in phytonutrients and antioxidants that contribute to good health and disease prevention – giving it a high rank on the ORAC (Oxygen Radical Absorbance Capacity) scale.

The main active components are methyl eugenol and estragole. These are the compounds that may make it effective as an antiseptic for oral health, and help to numb toothache.

In traditional applications, it has been used to stimulate the appetite, and as a digestive aid.

And current research suggests that its polyphenolic compounds may help to lower blood sugar levels, as well as reduce chronic inflammation.

It’s also showing promise as an inhibiting agent for tumor growth in certain cancers. And it may help to prevent platelet activation in heart and brain blood vessels, protecting against stroke and heart attacks.

Tarragon is also rich in the B-complex vitamins as well as C and A, and it has good levels of minerals as well.

The leaves and roots of the Mexican variety also contain important flavonoids for potent free radical scavenging, such as patuletin, quercetin, and rutin.

And the brightly colored yellow and orange flowers also contain the carotenoid lutein, another powerful antioxidant that helps to repair DNA and cell damage.

Tarragon is used to flavor a diverse range of foods – everything from mustard to sweet nut cakes to chicken soup. It can be used dried, fresh, or frozen, but the fresh herb offers the best flavor and aroma. 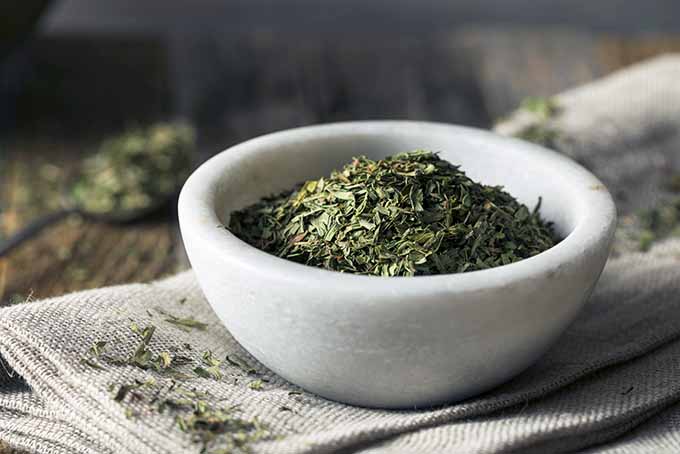 As heat diminishes its flavor, it should be added in the last fifteen minutes of prep to cooked dishes. Or, avoid cooking it altogether and chop finely to sprinkle on top of a dish as a garnish.

Its distinct flavor can quite easily dominate and drown out milder ones, so care needs to be taken when adding it to a dish – a little goes a long way, particularly when it’s used fresh.

The leaves of the Mexican type have a slightly sweeter flavor, and can be substituted freely in all culinary applications where the herb is called for. Plus, its cheerful flowers also make a calming tea when dried.

Tarragon is the lead flavoring ingredient of Bearnaise sauce, and it’s often used to flavor condiments such as mustard and vinegar. It also makes a delicious herb vinaigrette when combined with parsley and thyme.

Combine it with mustard for topping seafood dishes like a lobster or crab hoagie, and it will even liven up a tuna salad.

You can also add a dash of continental flavor to grilled hot dogs and smokies with tarragon-infused mustard. 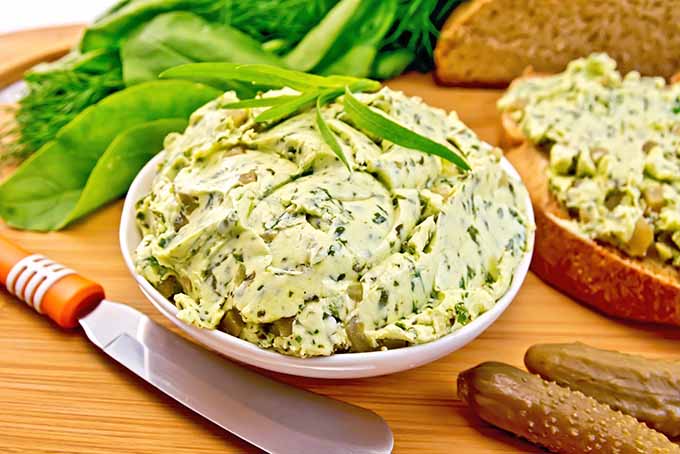 Crush some mustard seeds with freshly minced tarragon and whip up a dynamic compound butter for your favorite steak, lobster, or even a baked potato.

Make your own herbed vinegar by gently bruising the leaves, then steep them in a wine or champagne vinegar. Drizzle on steamed green veggies, or use it as a base for a homemade vinaigrette. Or, try making a flavor-infused oil instead.

Tarragon teams up well with egg dishes too.

Mix some in with the fillings for an omelet or quiche, or sprinkled over the top of a frittata or scrambled eggs. It adds a delightful piquancy to deviled eggs, and can be mixed into a creamy dressing for an egg salad.

The warm, nutty taste of coriander blends nicely with tarragon for mild-flavored foods like fish and poultry.

Combined, the herbs are used in spice blends for boiled or steamed seafood, such as a bouillabaisse mix, in some curry dishes, and to season chicken stews and soups.

And mixed with a variety of other dried herbs, dried tarragon is a perfect component in our homemade all-purpose dry rub for chicken.

On its own, it can be used to season a variety of seafood and white fish, like sole, halibut, and cod, as well as chicken dishes. 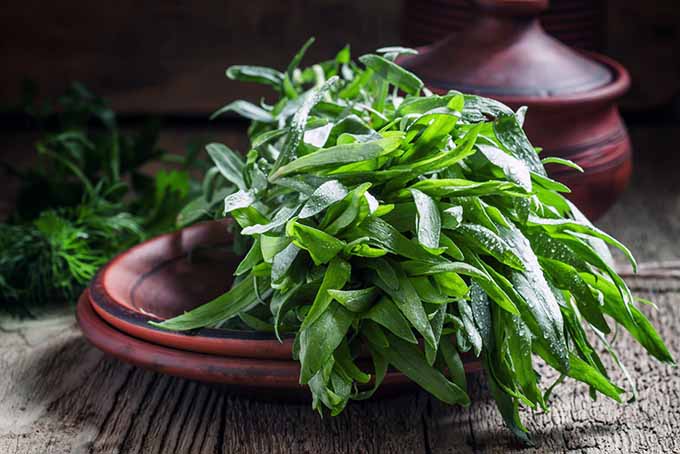 For roasted root veggies, season with a sprinkle over the top fifteen minutes before removing from the oven.

Its hint-of-licorice flavor is particularly well-suited to work with tomato dishes. Add it to soups and tomato-based pasta sauces. Sprinkle it on sliced tomatoes or a Caprese salad.

As the leaves are very tender, they can also be combined with mixed salad greens. Add a pinch to a fresh Greek salad – a small amount blends nicely with both basil and oregano.

Tarragon tea has a mild taste and makes a soothing hot beverage to de-stress and calm down after a hectic day.

Pour boiling water over a tablespoon of lightly bruised leaves and steep for five minutes. Adding a bit of grated ginger or mint leaves can help to sooth an upset tummy. 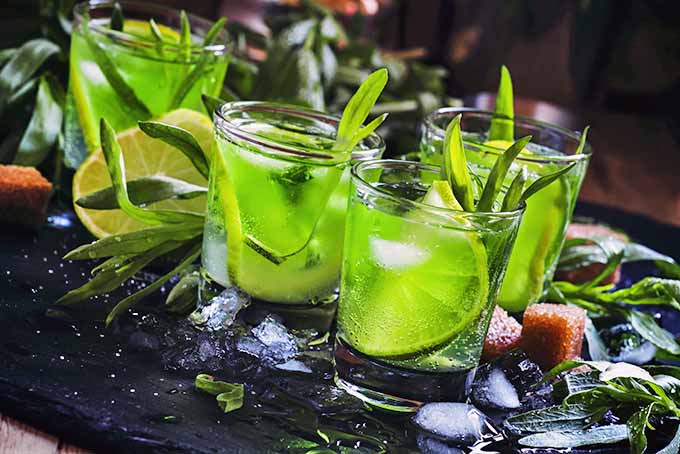 Fresh leaves can also be muddled into a light syrup to use in refreshing summer spritzers and vinegar shrubs, or use a large sprig as a garnish in anisette-based cocktails.

If you’re interest in growing your own to have a ready supply on hand, you will enjoy this post from Gardener’s path.

This royal member of the herb realm deserves a place of honor in every kitchen. 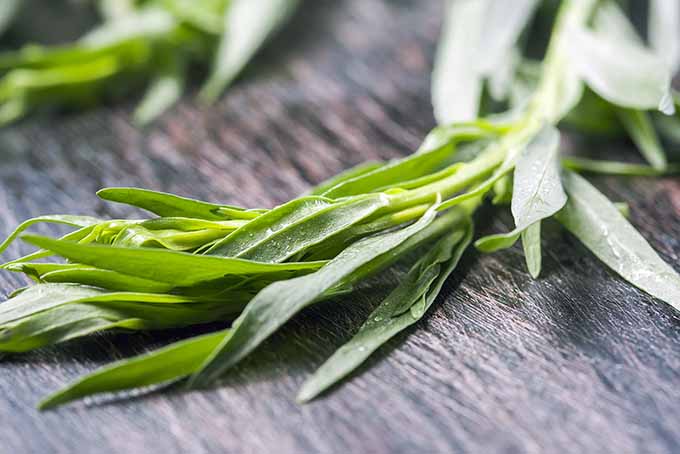 Versatile in cooking, its unique flavor and aroma is best enjoyed fresh, or when added during the last 15 minutes of cooking to retain its full flavor.

Experiment with it to find your favorite tarragon recipes, and discover what the French have long known – this herb reigns supreme!

And remember, if you live in a hot climate, the Mexican variety makes a great substitute to cook with, and to grow in your garden.

How about you folks, any favorite recipes you’d like to share? Drop us a note in the comments below!

And don’t forget to check out all of our spice and herb guides to find your favorite combinations and tips for use.