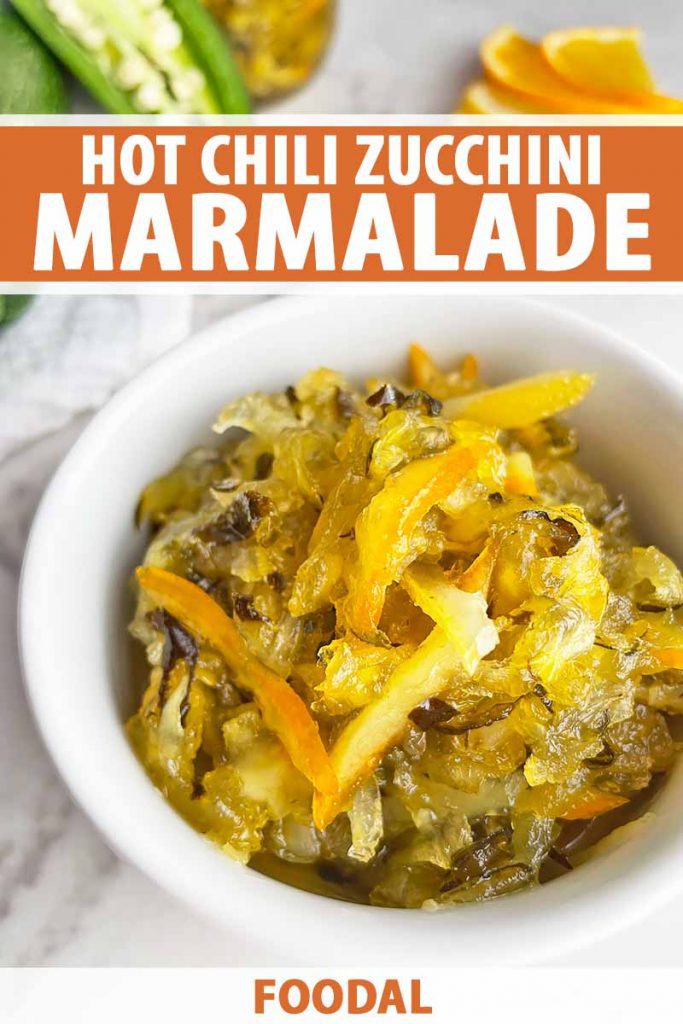 Sweet, spicy, fragrant, and citrusy, this sassy marmalade hits every destination on my roadmap of favorite flavors. 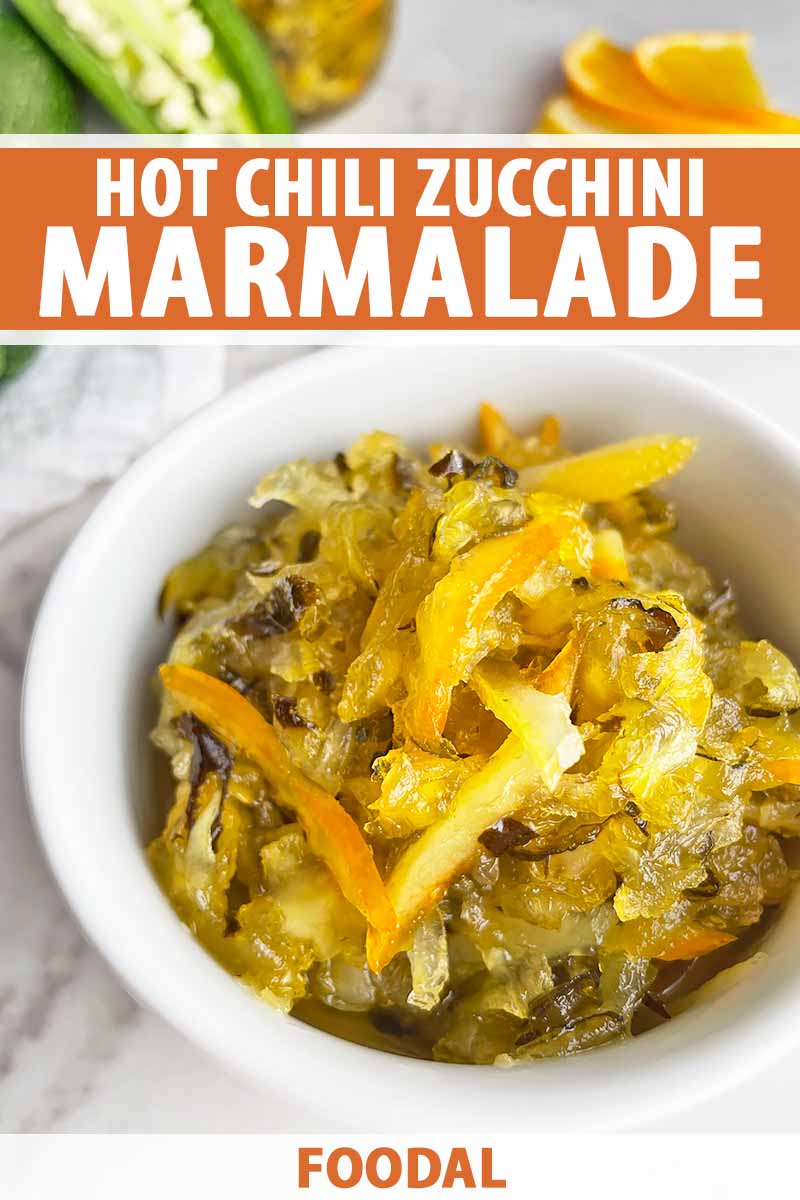 I’ve always considered zucchini a go-to ingredient in my bag of magic cooking tricks. I don’t have much of a green thumb, but I do know that zucchini season brings a whole mess of the yummy summer squash varieties, and people are always after new ways to use up or preserve this tender green veg.

I can’t pass it in the produce aisle without snagging an armful and wondering what lies ahead.

I’ve fried it, pickled it, and even turned it into thick ribbons adorned with an herby vegan sauce.

But never in my wildest dreams did I imagine marrying it with sugar, spice, and everything nice.

(By everything nice, I clearly mean jalapenos.)

A hit of heat, especially in a sea of sweetness, is like finding a twenty in the back pocket of a pair of jeans that were accidentally nestled behind your hamper for a month.

But this jam isn’t just sweet and spicy. Warm spices and aromatics come in and shake everything up, with woody cinnamon, bitter clove, and zippy fresh ginger root infusing the concoction with all kinds of pungency. 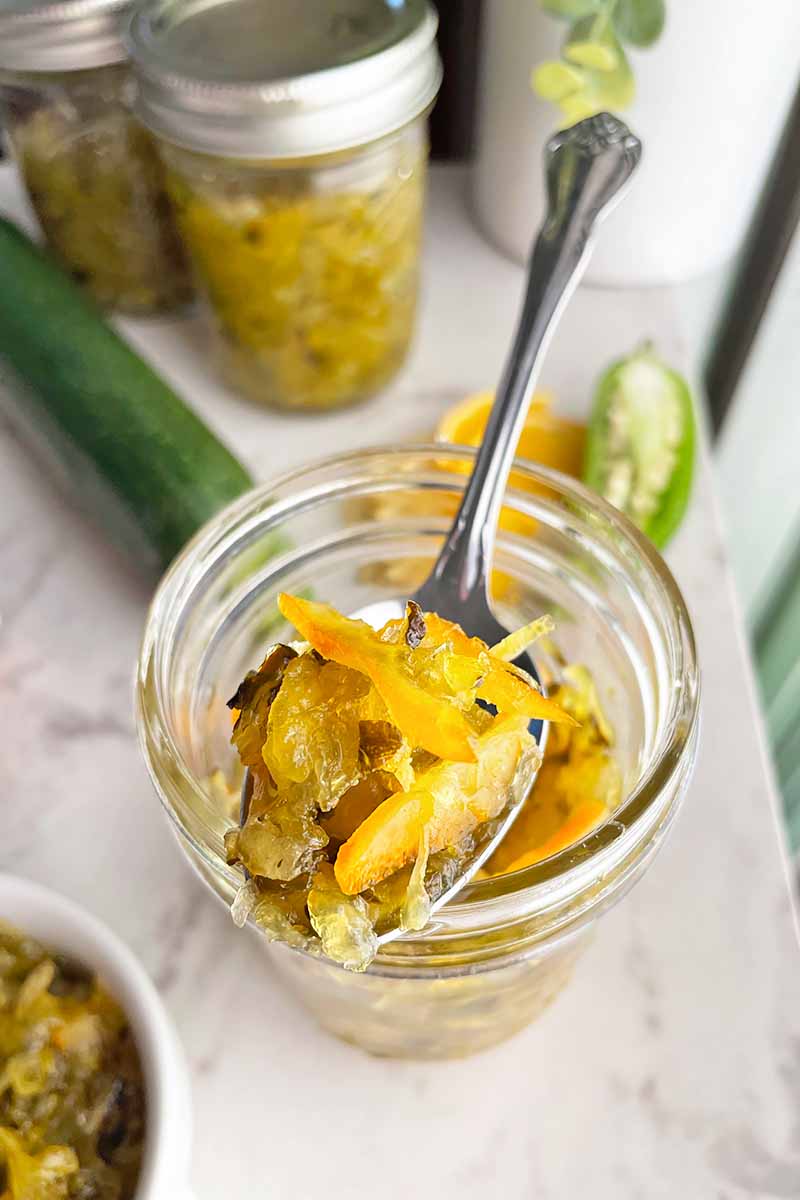 When I stood back and examined the components of this recipe spread across my counter, there was a flicker of anticipation in my eyes and a rumbling in my belly.

Probably should have had lunch first…

The bulk of the base is made up of shredded zucchini, and if you’ve ever worked with the vegetable prepped in this way, you know that sucker is packing a lot of water weight.

But that’s one of the benefits of using it to make a marmalade. You don’t need to add additional liquid to dissolve the sugar – it’s already built in.

Also grated into the mix: the flesh of a Granny Smith apple. Celebrated for their tart, sour flavor and bright zing, a little goes a long way, and the fruit’s powerful acidic notes make a lovely match with the fragrant orange and lemon rind.

While we’re on the topic of zest, peep this guide to clear up any confusion between jams, jellies, preserves, and more. You’ll learn that marmalade must be composed of one or more fruits (as well as citrus peel) that are chopped into large pieces and cooked down until syrupy. 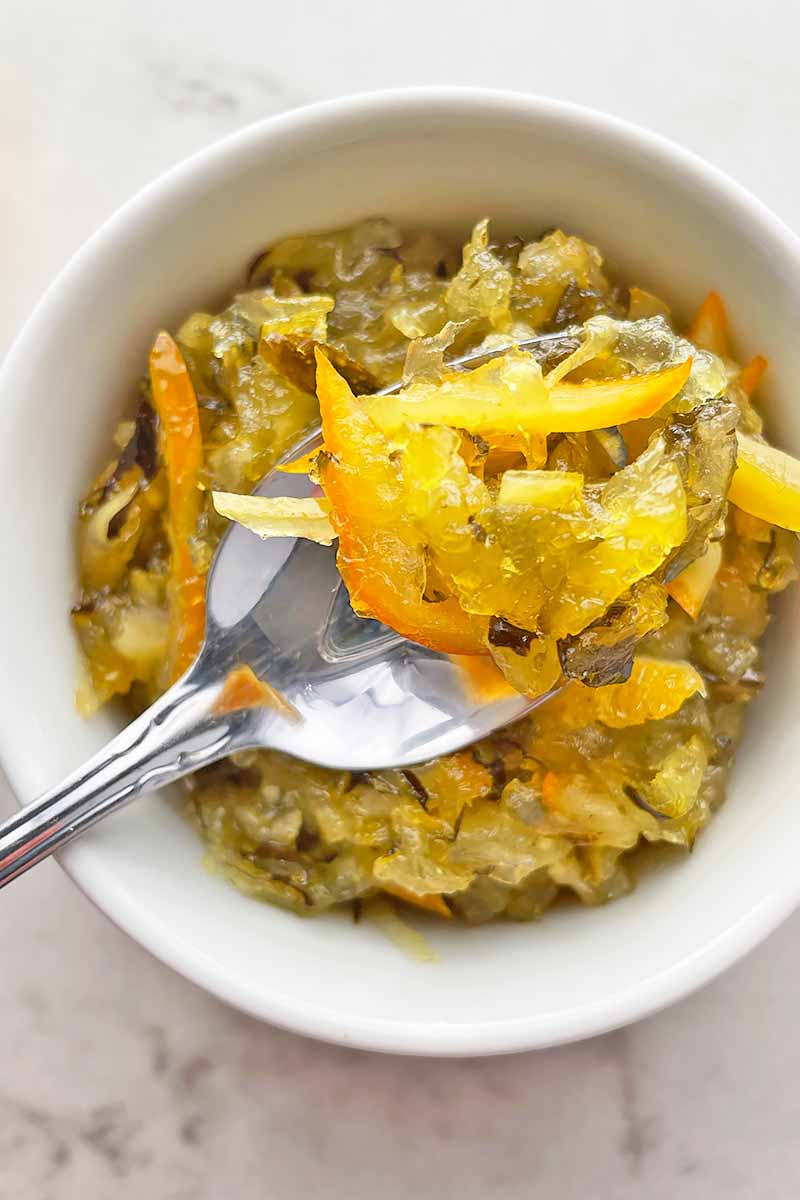 I love a good fruit education lesson, don’t you?

The zucchini shreds give the spread a chunky texture that I love, and there’s no need to tear open any powdery packets as the mixture is gelled thanks to natural pectin found in the apple, and the citrus pith.

As for the final product? It’s sweet, vegetal, earthy, and grassy. The jalapeno’s kick subtly smacks the back of your throat in a way that’s not overly aggressive (despite how my description sounds). In fact, it makes you want to take another bite.

And since I started this journey hungry, you better believe I did.

This citrusy spread, swimming with grated zucchini and tart apple, gets a hint of spice from jalapeno and fresh ginger.

Using a paring knife or the edge of a spoon, peel the skin from the ginger, and then use the flat side of a chef’s knife to gently smash it.

I prefer to chill the citrus before I begin, because I find it’s easier to work with.

Rinse and pat dry the orange and lemon, and then slice off the ends with a sharp knife so they sit flat on your cutting board. Thinly slice them into rounds and then remove and discard any seeds. Dice fine, into pieces about an eighth to a quarter of an inch long, making sure the peels in particular are finely chopped. 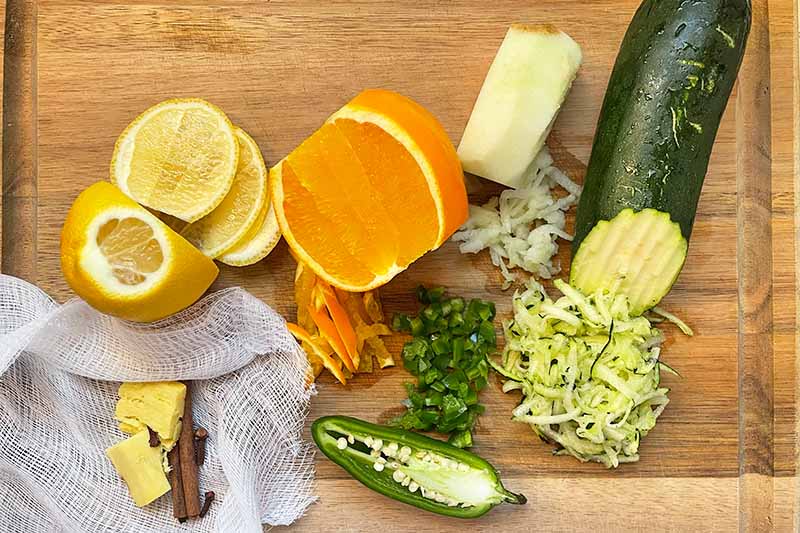 You can also chop the flesh and rind into long strips. This is up to personal preference, depending on the texture you want the final product to have. The natural pectin in the rind and pith is what helps to bind and jell the marmalade.

Grate the zucchini, peel and grate the apple, and seed and mince the jalapeno.

For more of a kick, refrain from removing the seeds from the hot pepper.

Tie the ginger, cinnamon stick, and cloves in a piece of cheesecloth. If you don’t have any cheesecloth on hand, you can grate or finely mince the ginger, and substitute 1/4 teaspoon ground cinnamon and a pinch of ground cloves for the whole spices. Place them directly in the pot with the other ingredients.

Add the spice bag, orange and lemon, zucchini, apples, jalapeno, and sugar to a large pot and place it over medium-high heat.

Fold the ingredients together gently until the sugar dissolves so you don’t break open the spice bag. 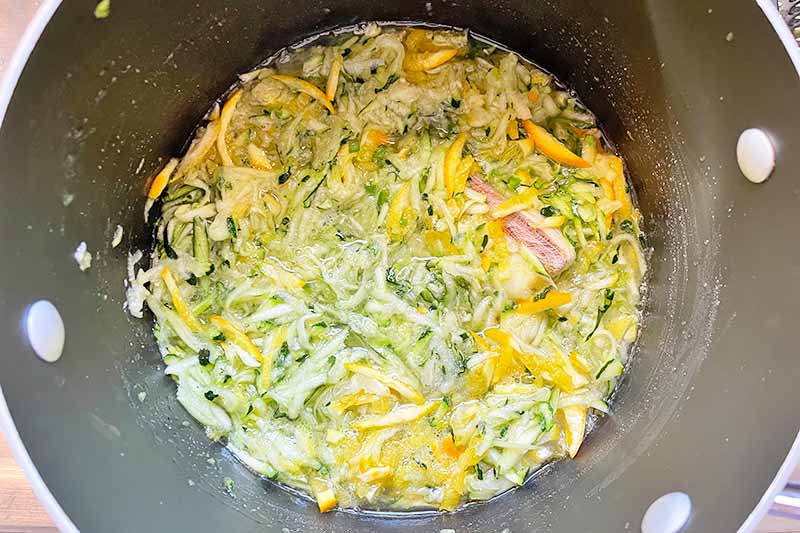 Continuing to stir constantly, bring the mixture to a rapid boil. Lower the heat to medium and continue to cook until the marmalade reaches a thick consistency, stirring often to prevent anything from sticking to the bottom of the pan, for about 15 minutes.

The zucchini will release all of its water as it cooks, but if you still see a tiny bit of liquid in the bottom of the pan after the marmalade has thickened, don’t worry. It will set completely and become incorporated with the mixture once the marmalade cools.

Step 3 – Skim the Foam and Sanitize the Jars

Skim off any foam that comes to the top using a spoon or ladle, and then sanitize the jars while you’re waiting for the marmalade to cool.

Place a large pot of water over high heat. Once the water is hot, but not boiling, place the jars right-side up in the pot making sure that the water comes up about 1 inch over their tops. There’s no need to sanitize the lids and rings. 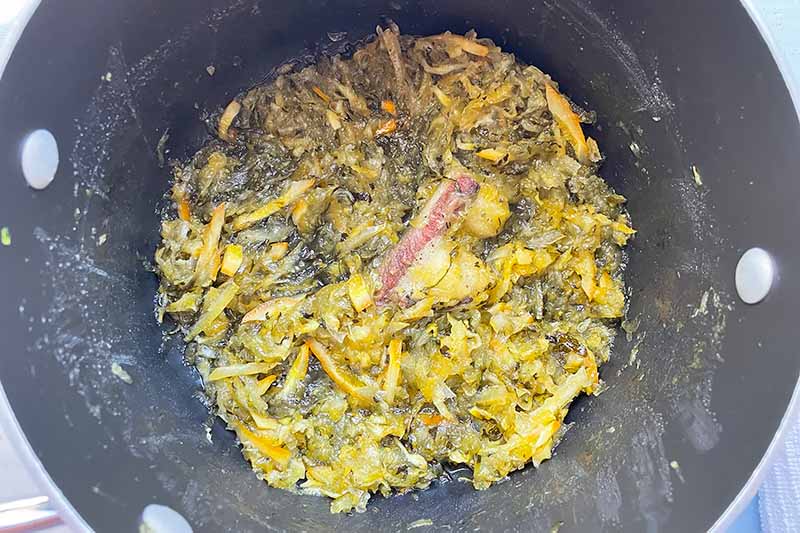 Allow the water to reach a full rolling boil and then start a timer for 10 minutes.

Turn off the heat and use jar lifters or tongs to remove the jars and set them aside to dry on a clean surface. If you’re not ready to can the marmalade, you can leave the jars in the hot water for up to 1 hour.

You may use the same pot for the boiling water bath to process the filled marmalade jars, so there’s no need to drain the water.

Discard the spice bag and ladle the marmalade into the sterile canning jars, leaving about 1/4 inch of space at the top.

Wipe the jar rims clean using a damp cloth or paper towel, tightly screw on the lids, and process the jars in the boiling water bath for 10 minutes (using the same pot and water that you reserved in the last step). 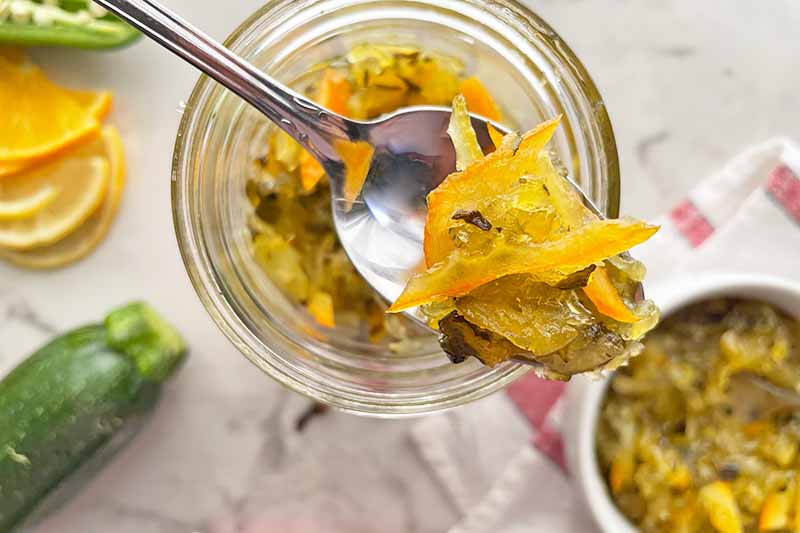 Either as soon as you remove the processed jars from the pot or shortly after, the lids will ping. This sound indicates that the vacuum seal is being formed. Allow the jars to cool to room temperature, and then make sure all of the lids have popped.

If you’re storing the marmalade at room temperature, the jars should be placed in a cool, dark location, and they’ll keep for up to 2 years. Opened marmalade should be refrigerated and may be stored safely in the fridge for up to 6 months.

Actually, spread this marmalade anywhere you can! I find it to be slightly reminiscent of hot pepper jelly, so it pairs well with fluffy goat or cream cheese on a cracker like nobody’s business. It will also give the inside of your grilled cheese a golden hue and citrusy, spicy tang. 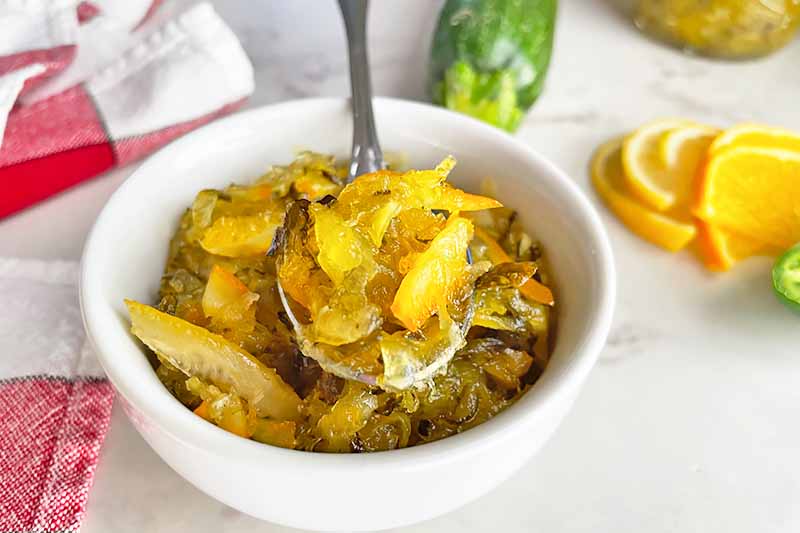 On the super savory side, I can’t get enough of it with chicken.

The truth is that once the zucchini releases its water, it acts like a sponge to gather up the flavors around it. And if you don’t think ginger, jalapeno, and tart apple are a match made in heaven for smoky grilled chicken thighs or pork, you may need a crash course in cookouts. Give it a try!

Did you take your zucchini marmalade in a sweet, spicy, or savory direction when you popped the top and put it to good use? Share your tasty tips in the comments below! And don’t forget to give this recipe a five-star rating if you loved it.

Looking to master more marmalades, or find new ways to use them in your cooking? Give these recipes a try next: 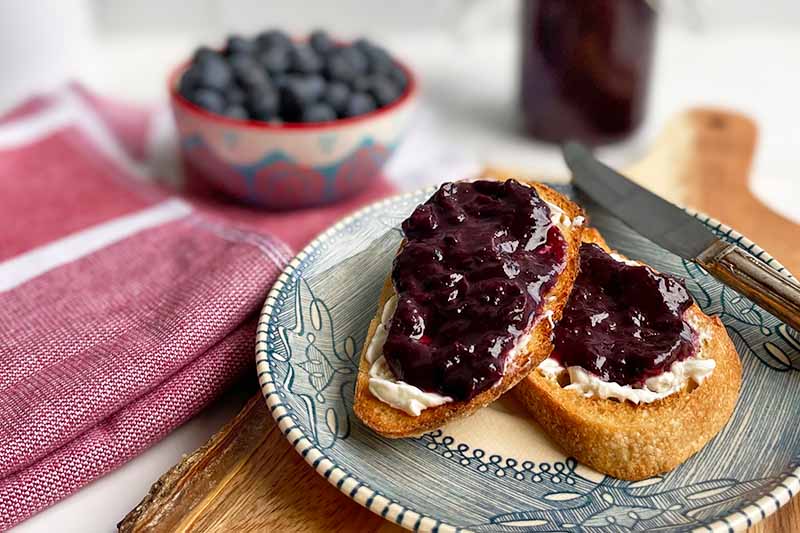 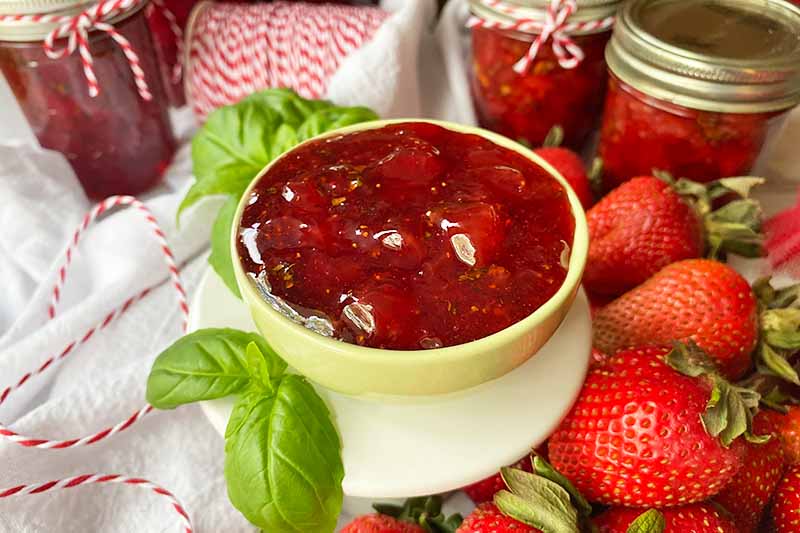 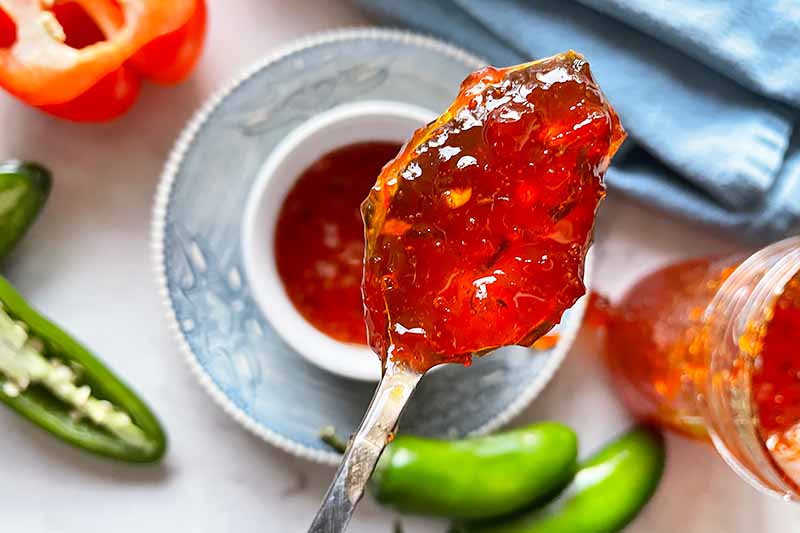