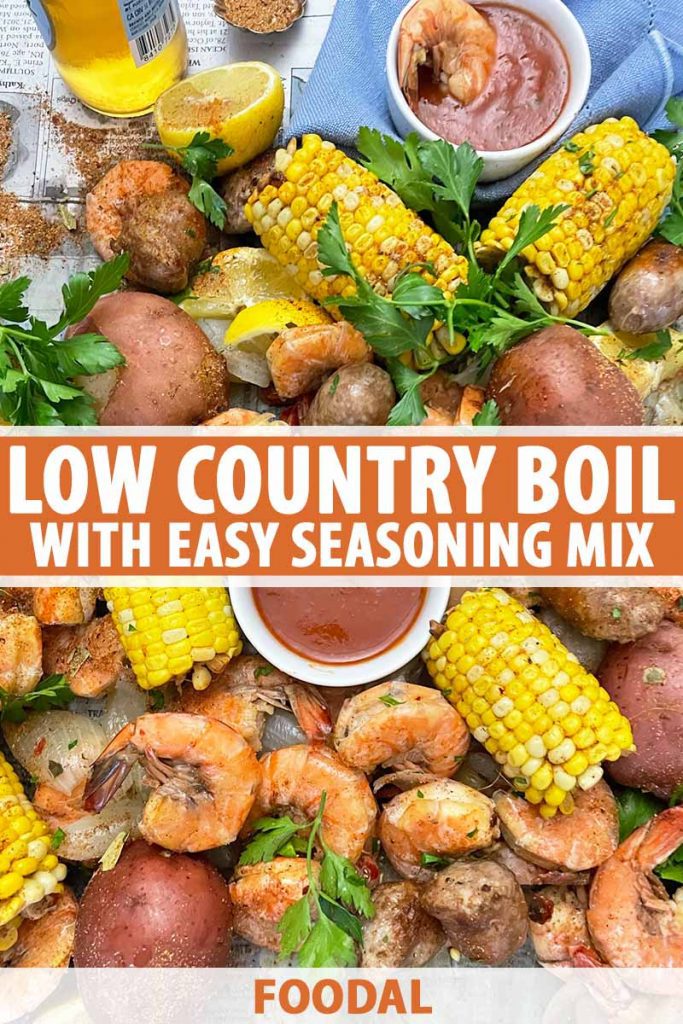 Roll up your sleeves and change into a shirt you don’t mind splattering with melted butter. 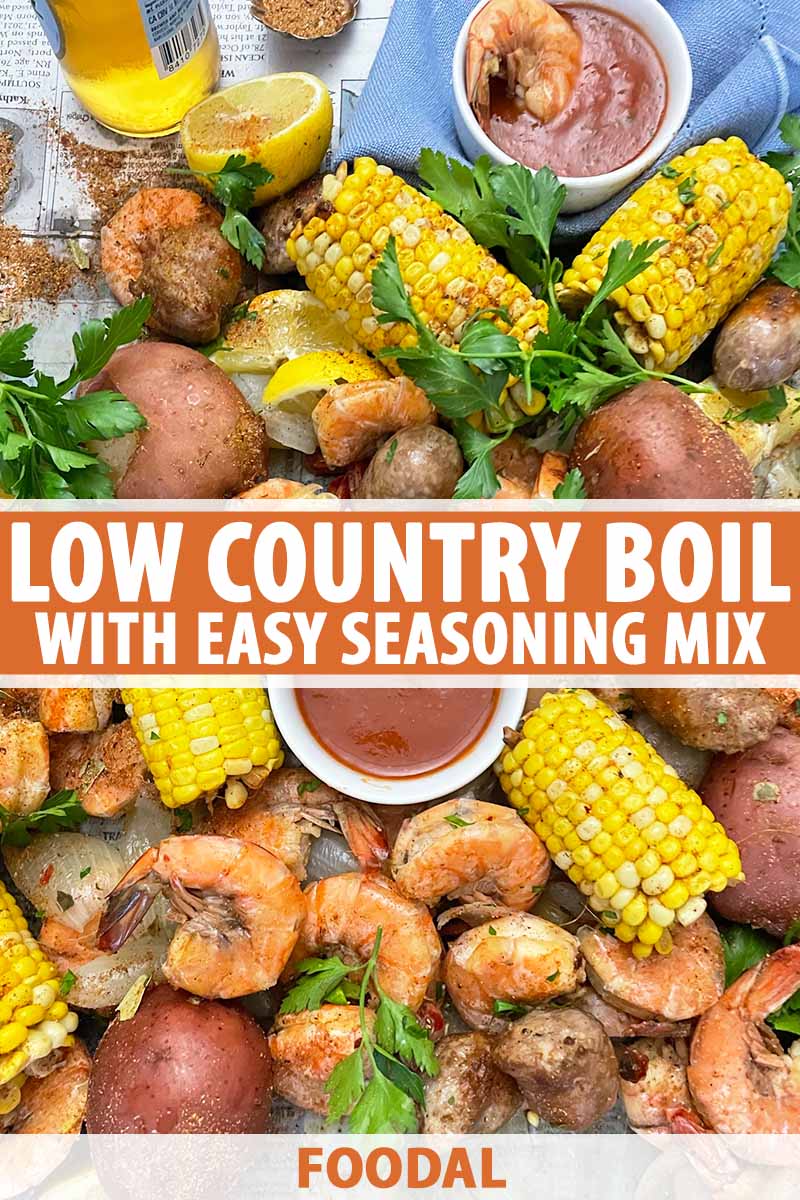 If the idea of preparing your very own low country boil (also known as Frogmore Stew) sounds intimidating, let me put your mind at ease.

In under an hour (and while being eyed by a small yet ravenous flock that included a baby), I whipped up the most fantastic feast for four I could have ever imagined.

Well, four and a half, if you count the baby.

This classic seafood boil originates from the Low Country areas of the Georgia and South Carolina coast.

Some believe it got its roots from local shrimpers who collected whatever they could find to make a stew, while others claim it was invented by Richard Gay, the owner of Gay Seafood Company who brought the recipe to Frogmore, South Carolina in the ‘60s.

Wherever it came from, we’re all glad it’s here.

Oyster roasts, crawfish boils, and the like are staples where I hail from in coastal North Carolina, but a southern drawl certainly isn’t a requirement for throwing a seafood-centric bash. 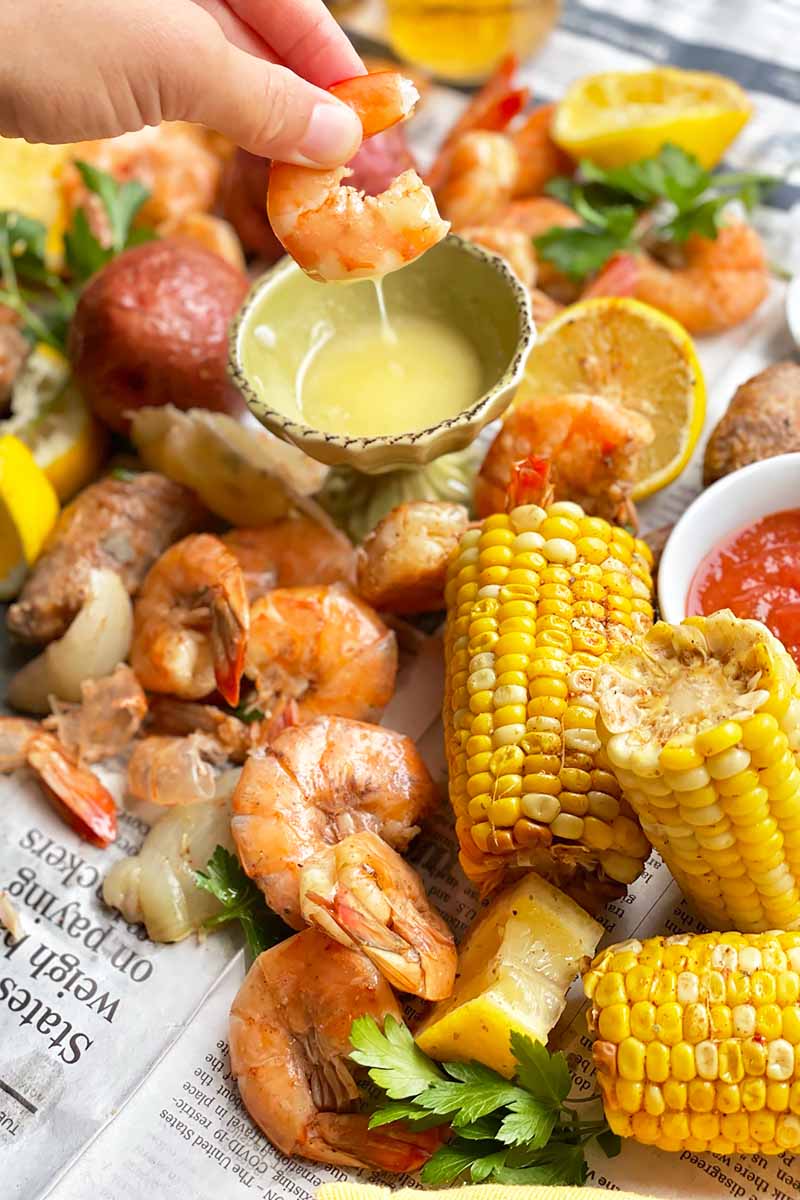 I’ll admit, I was nervous when I first thought about attempting this recipe. The last experience I had that included this type of interactive meal resulted in a stockpot nearly being sent to the moon.

I wish I was exaggerating. It was New Year’s Eve and my friend Allison, known for hosting a packed party, decided the best way to feed the hungry horde was via campfire.

She loaded an enormous stainless steel vessel with water and rigged up an apparatus which dangled it over her backyard fire pit.

Somewhere between mingling with the guests and handing out glamorous cocktails (okay, okay they were tequila shots featuring Fresca), Allison neglected to realize that the rapidly boiling water had evaporated.

Complimented by the loudest clang I’ve ever heard outside of July 4th, the bottom of the pot shot down directly into the flames and everyone ducked for cover. Luckily, no one was hurt and no oysters were harmed in the making of our dinner, which Allison eventually transferred to the grill. 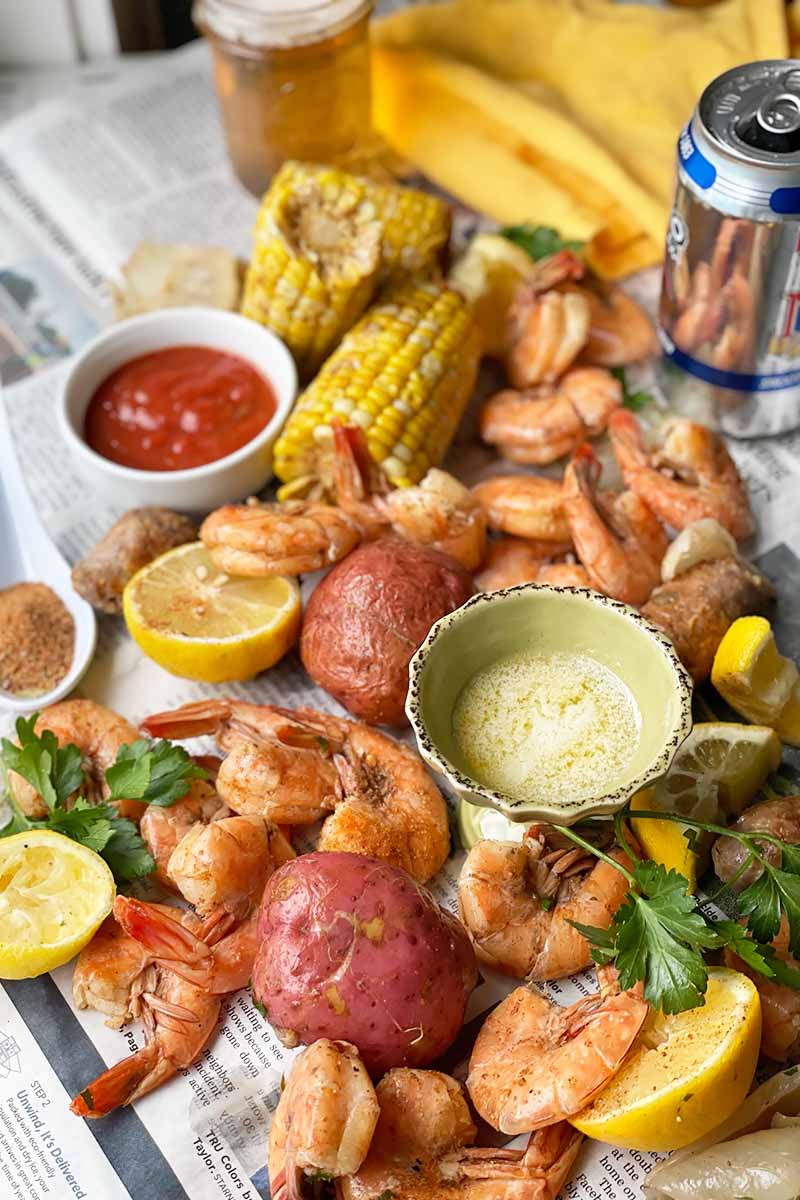 The point of this story? If you’re going to cook fireside, keep an eye on your pot.

Thanks to this low country boil being a scaled down version of a feast typically known for sustaining a large crowd, it comes together right on your stovetop, and in a snap.

Can you whisk dried spices together in a bowl? Can you drop ingredients into water and set a timer?

Great! You can totally master this meal.

Other than the fun that comes with shoving whole butter-dunked potatoes and sweet corn into your mouth, the highlight of this bold boil is the homemade seasoning mix. It’s a Creole-inspired blend of savory flavors with delicate sweeter notes from a touch of warming spices like cardamom and allspice. 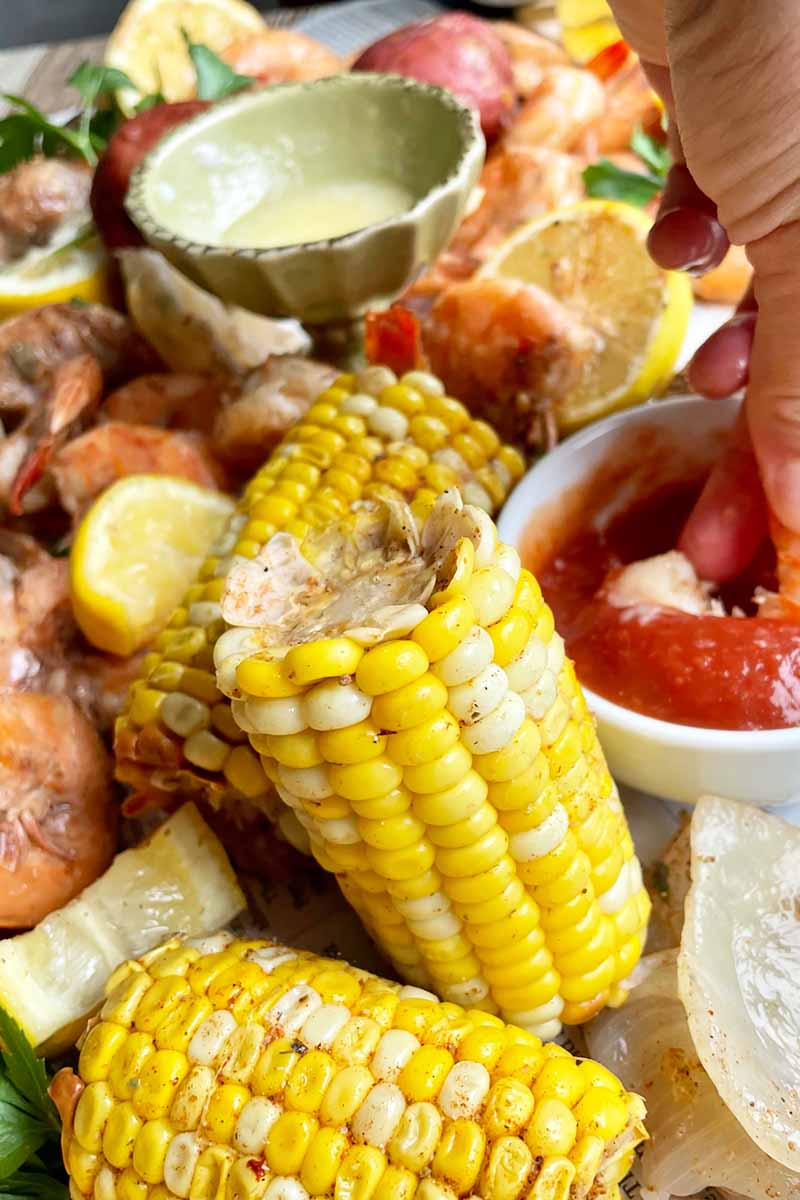 It’s an aromatic, complex medley that coats every bite of the veggies, sausage, and shrimp. I couldn’t get enough of it and I would be lying if I said I didn’t add extra pinches to every lemony bite.

I suggest using any leftovers on your next side dish of roasted potatoes. You’re welcome, in advance.

Even if you’re staying indoors on a rainy evening as my friends and I happened to be when we got down and dirty with our own low country boil, the tower of shrimp shells, butter-dotted napkins, and icy cold brews will transport everyone to summertime picnic land.

When it’s a wrap, simply fold up the wreckage in the newspaper sheets and toss the whole thing into the trash for a tidying session that’s over in seconds.

Well, you may need a shower to wash the cocktail sauce off your elbows, but other than that, cleanup is a breeze!

Prep the vegetables. If you haven’t done so already or purchased ones that are already prepped, devein the shrimp. 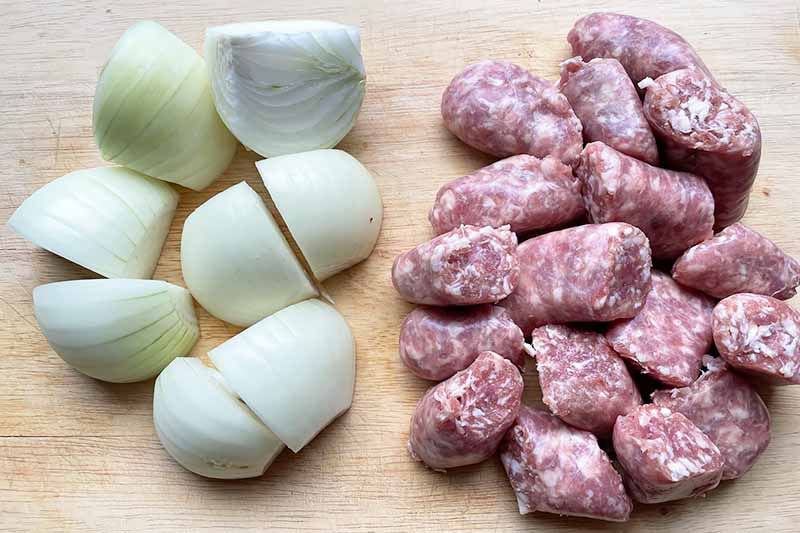 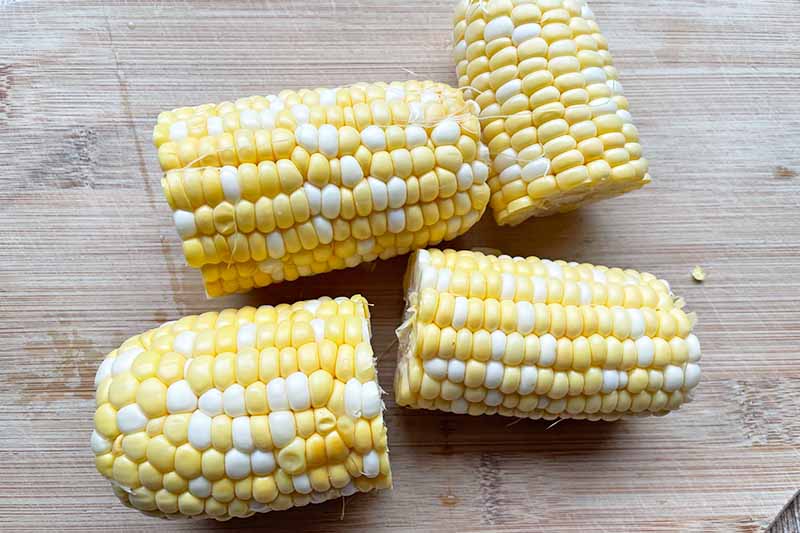 Fill a large 16-quart stock pot halfway with 8 quarts of water and bring it to a boil over high heat. If you’re shopping for the right kind of pot that’s best to use for seafood boils, review our top picks! 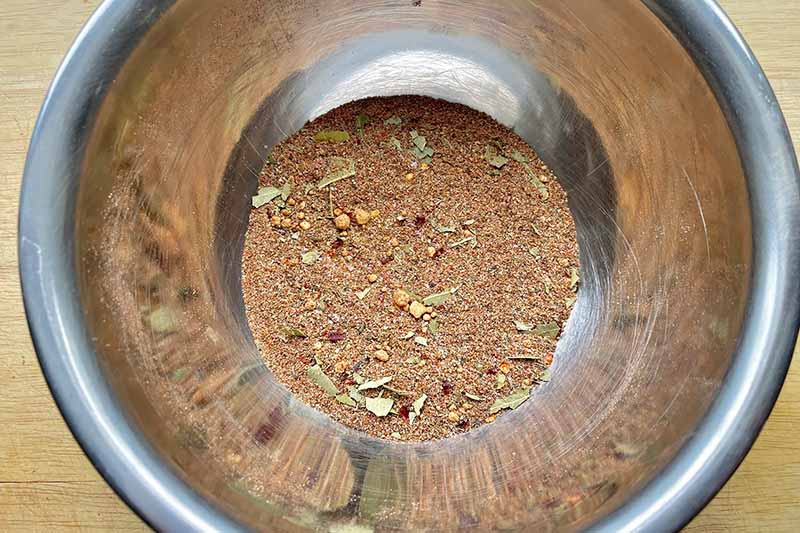 Keeping the heat on high so the water is at a rolling boil, carefully drop the potatoes into the pot and cook until they just begin to soften when pierced, for about 8 minutes. They’ll be soft enough to bite into by the end of cooking. 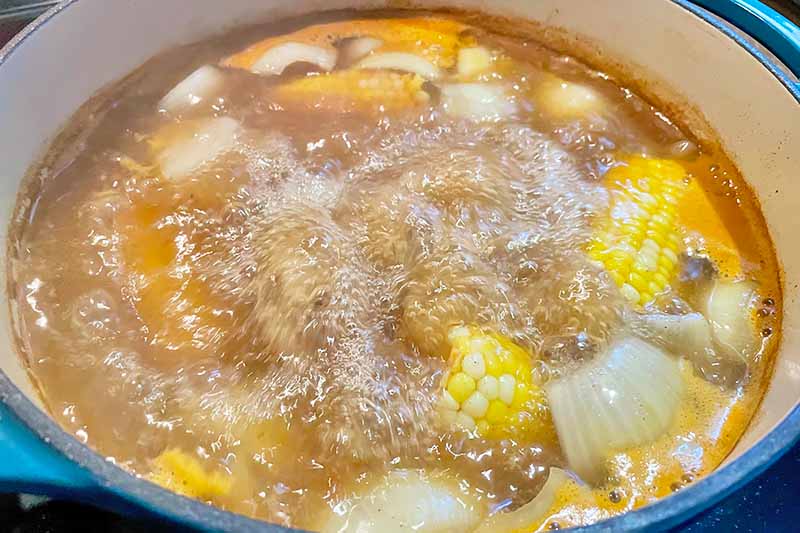 Add the onions and sausage, and cook for 5 minutes. If you want the onions to be more tender-crisp than soft, you can add them at the same time as the corn instead.

Add the corn and cook for 5 minutes more.

If you opt to purchase raw sausage instead of cured, make sure its internal temperature reaches 160°F (which will still only take about 10-15 minutes). Since it’s boiled, the raw sausage will be paler than pre-cured and smoked sausage when it’s done, but you can crisp the outside in a cast iron skillet if you want to add some color and additional texture. 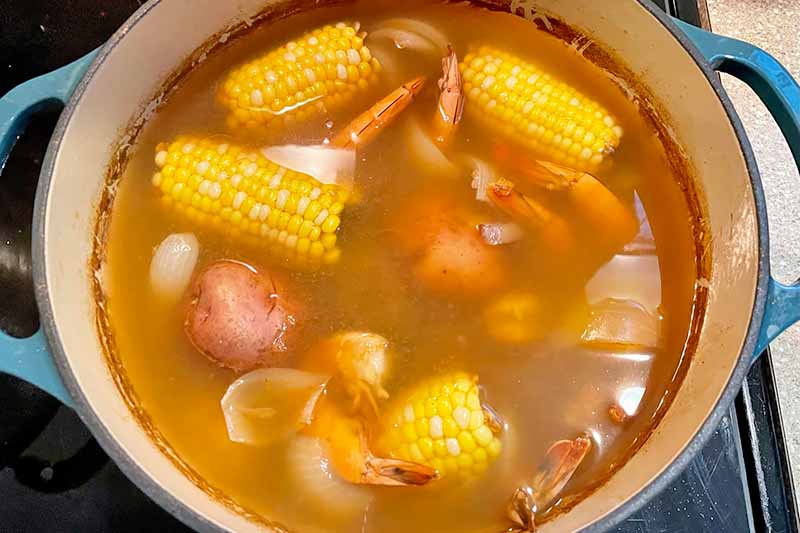 Add the shrimp and boil until it is opaque and cooked through, about 3 to 4 minutes if they’re medium-sized and 5 to 6 minutes for large. Keep an eye on them, because shrimp don’t take long to cook!

The potatoes are done when they are tender all the way through, and a sharp knife slides easily all the way to the center.

Slice the lemons into wedges, melt the butter for dipping, and spread the newspapers (if you’re using them) onto a table. 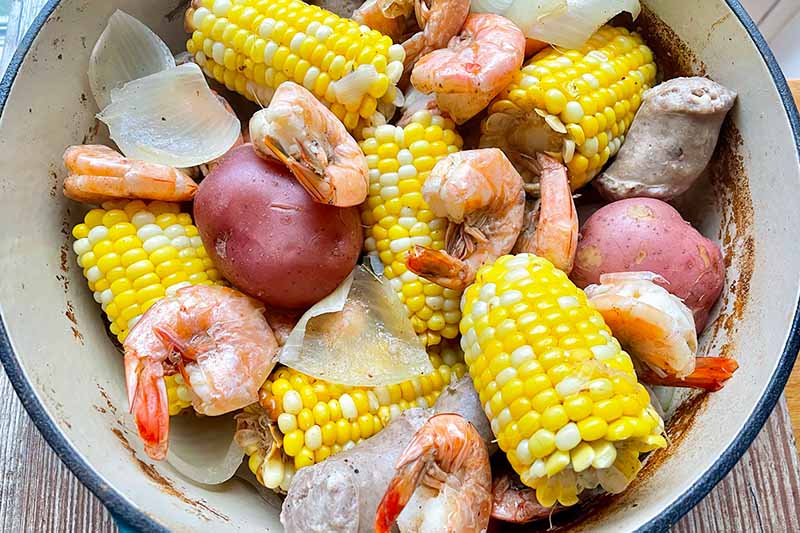 Drain the liquid from the pot and discard it. Sprinkle the shrimp and veggies with the reserved seasoning, and toss to combine.

Pour the contents of the pot either onto several large platters or clean sheets of newspaper for serving. Serve with the lemon wedges, cocktail sauce, and melted butter, or your choice of condiments. 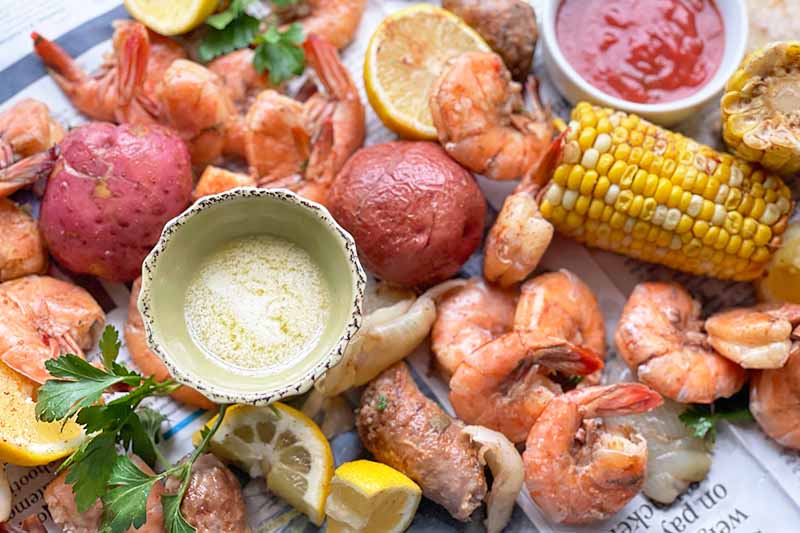 I like to add some freshly torn parsley for a pop of green color. Hot sauce, clarified lemon or garlic butter, and Old Bay seasoning (or your favorite packaged Creole/Cajun blend) also pair nicely with this meal.

Beer, Butter, and Your Best Buds

What more could you ask for? Not only is this spread a cinch to multiply for more people, but the only touch of finesse required for cooking this meal is making sure to drop the ingredients carefully into the pot. 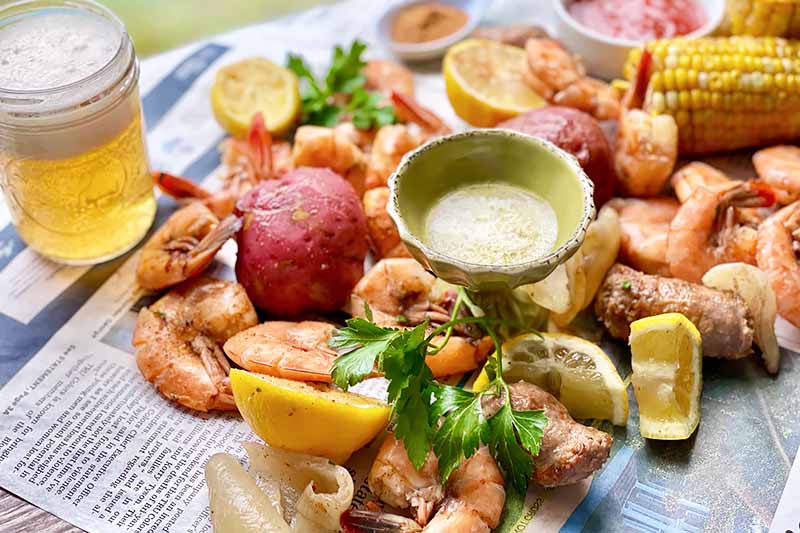 Splashing boiling water on yourself is not a party trick.

Regular melted butter works like a charm for serving, but clarifying it will keep your sauce from congealing before everyone’s done dunking. Simply melt the butter over low heat and then use a slotted spoon to skim off the foamy milk solids that rise to the top.

Boom, butterfat. Transfer it to a clean saucepan with a ladle, making sure to leave any water that remains in the bottom of the original saucepan behind.

If drawn butter isn’t your bag, well, you’re probably crazy, if you ask me! But here are some other sauces that make a super landing zone for shrimp, sausage, and potatoes:

What tweaks will you make to this homemade seasoning mix to give it a personal touch? Extra cayenne? Lemon pepper? A whole clove or two?

Share your secrets in the comments below! And don’t forget to give this recipe a five-star rating if you loved it. 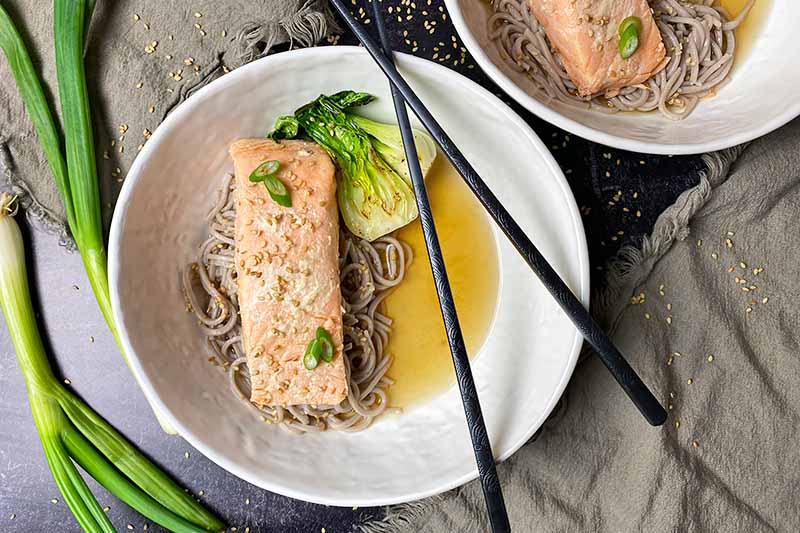 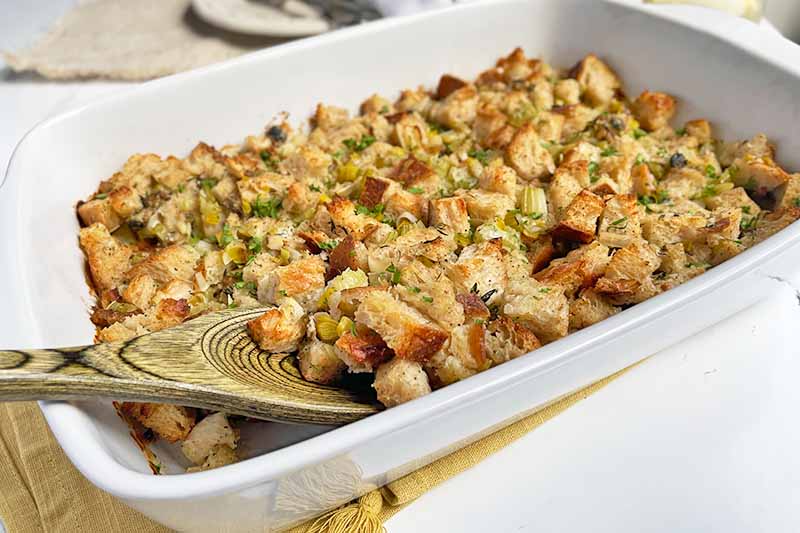 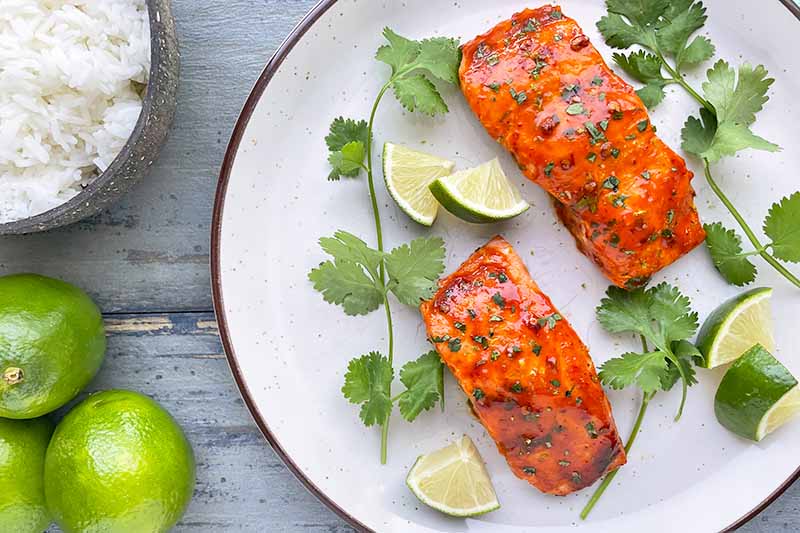