Fall in Colorado is weird. One minute the leaves are changing and there’s a chill in the air, then the temperature randomly spikes and it feels like a summer day again. 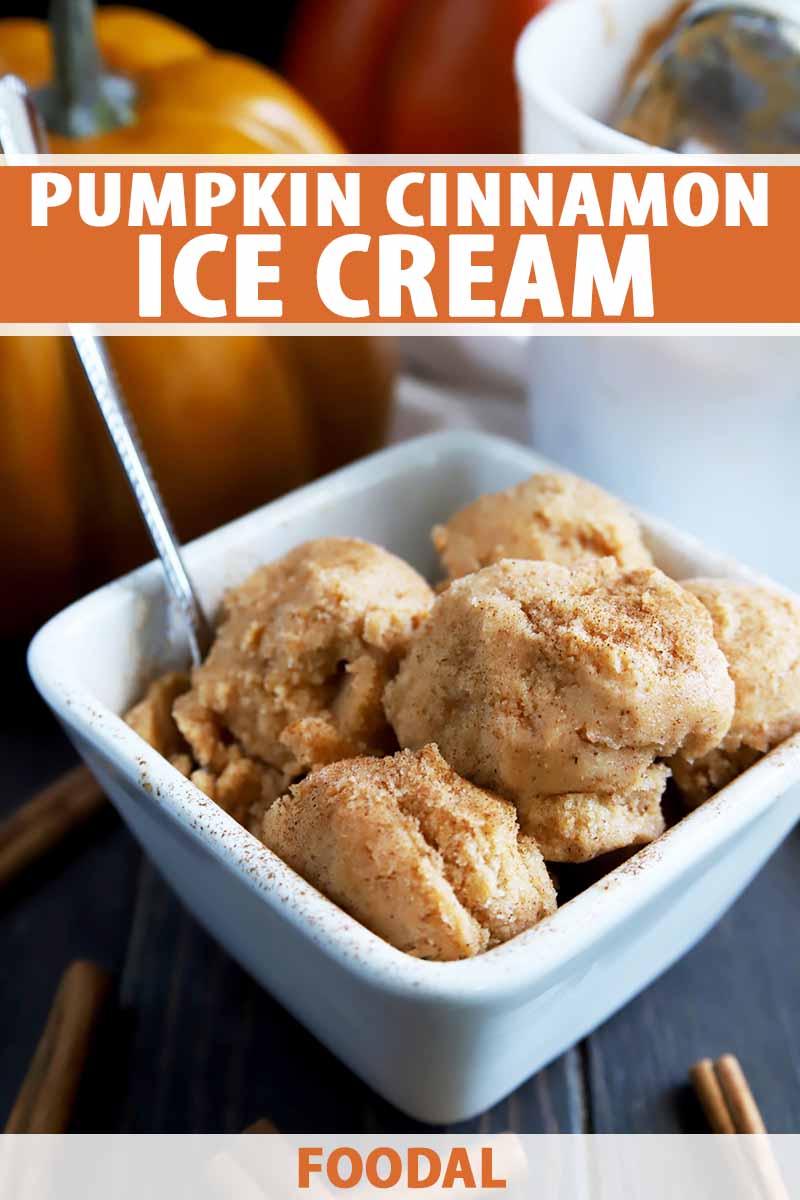 Just when you’re settling into the cooler weather, in the blink of an eye, it will suddenly be 90+ degrees outside. It’s oh-so-confusing and it’s one of those things that you just have to learn to love about living here.

So, what’s a girl to do when you want all the flavors of fall, but it’s still nice and toasty outside?

All I want to do is have an excuse to be basic AF with mugs of hot cinnamon tea steaming away and pumpkin spice candles burning in every room of my house. Instead, I will complain about the heat and the fact that my daily PSL makes me feel like I am overheating. 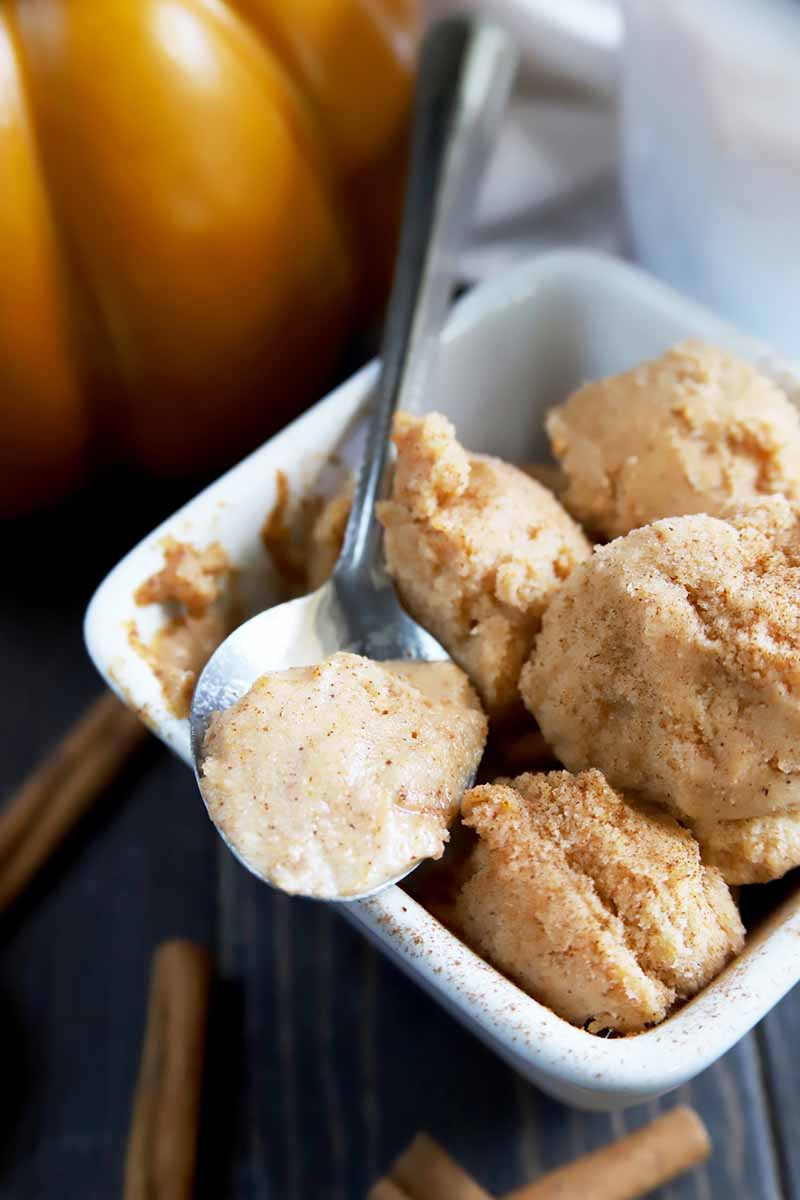 Or, I’ll just dive into a bowl of pumpkin cinnamon ice cream instead.

Yeah, that sounds like a much better idea! Doesn’t it?

This creamy frozen dessert is the best of fall and summer combined, all in one easy-peasy recipe.

Plus, it is a breeze to make, because you don’t even have to cook a custard base from scratch on the stove. Instead, you can just whip up the base right in your blender.

After that it’s smooth sailing, as you throw it in your ice cream maker and watch the results magically appear before your eyes. 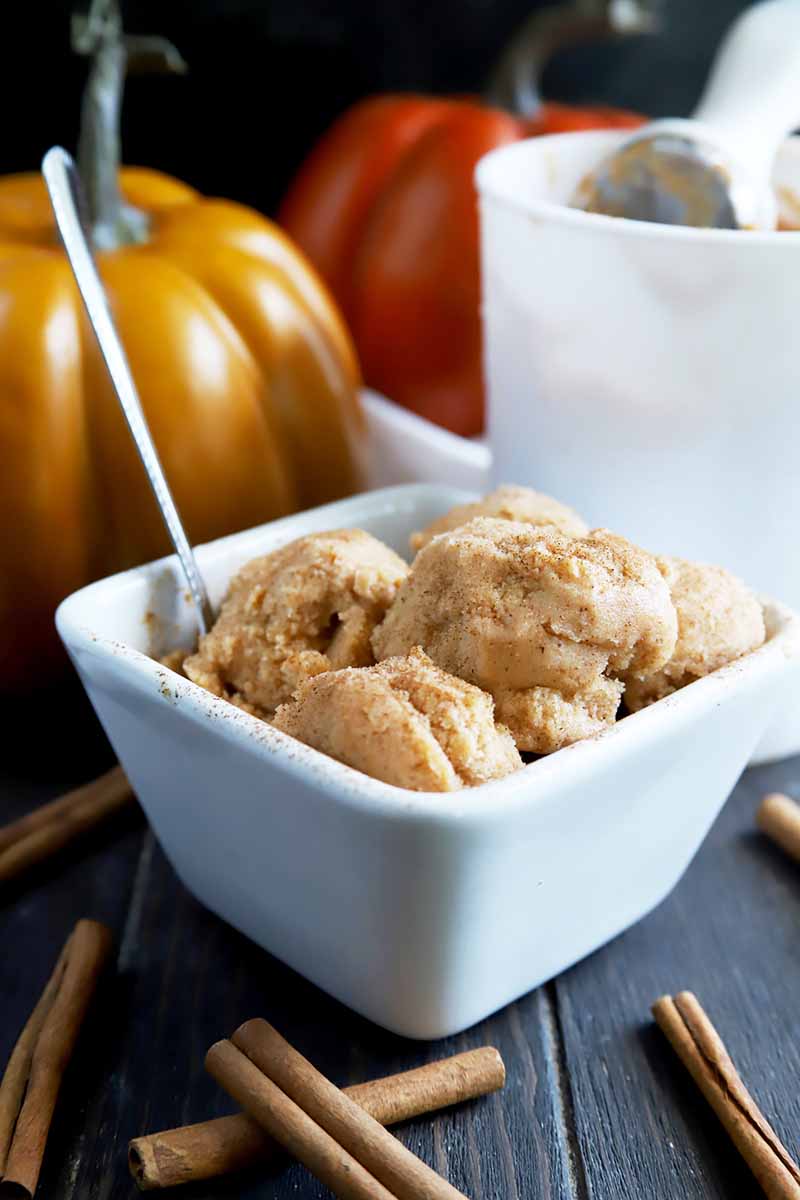 It also happens to be a lower fat option because it isn’t made with any cream. And, nope, it’s not frozen yogurt, either. The funny thing is that it doesn’t change the texture, at least as far as I can tell.

The end result is still nice and creamy… and that’s the best end result, isn’t it? Lower fat, and just as tasty. It’s like a dream come true.

The most torturous part is that you will have to wait for the ice cream to set up in the freezer in an airtight container for a bit after churning. But once you take that first bite, you will feel the cooling bliss of fall run all through your body.

It’s that chill that you need to cool off on those hotter early autumn days, with all of the classic flavors that you start craving the moment that September rolls around each year.

It’s one of those desserts that makes you sink into your seat a little more, with a big sigh of happiness to go along with it. 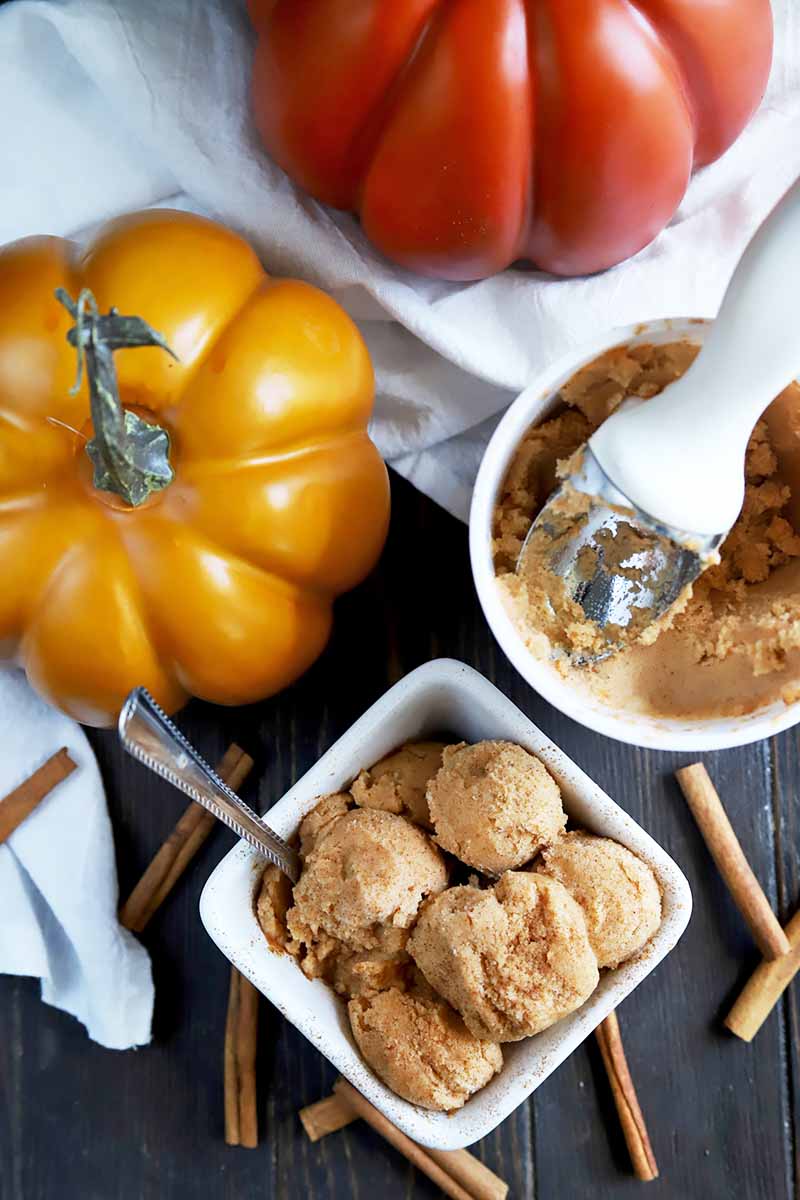 I am absolutely in love with this ice cream not only because it’s creamy, but because it has the ideal balance of pumpkin and cinnamon flavors.

It’s like whipping up a pumpkin spice-flavored coffee creamer or a PSL into a frozen dessert.

Be sure to sprinkle it with a little extra cinnamon on top when you serve it, for a double punch of the beloved warming spice. You can also crumble up gingersnap cookies or graham crackers on top if you like, to add a little something crunchy to the mix.

Serve it up in a bowl, a waffle cone, a sugar cone, or even use it to make a milkshake! 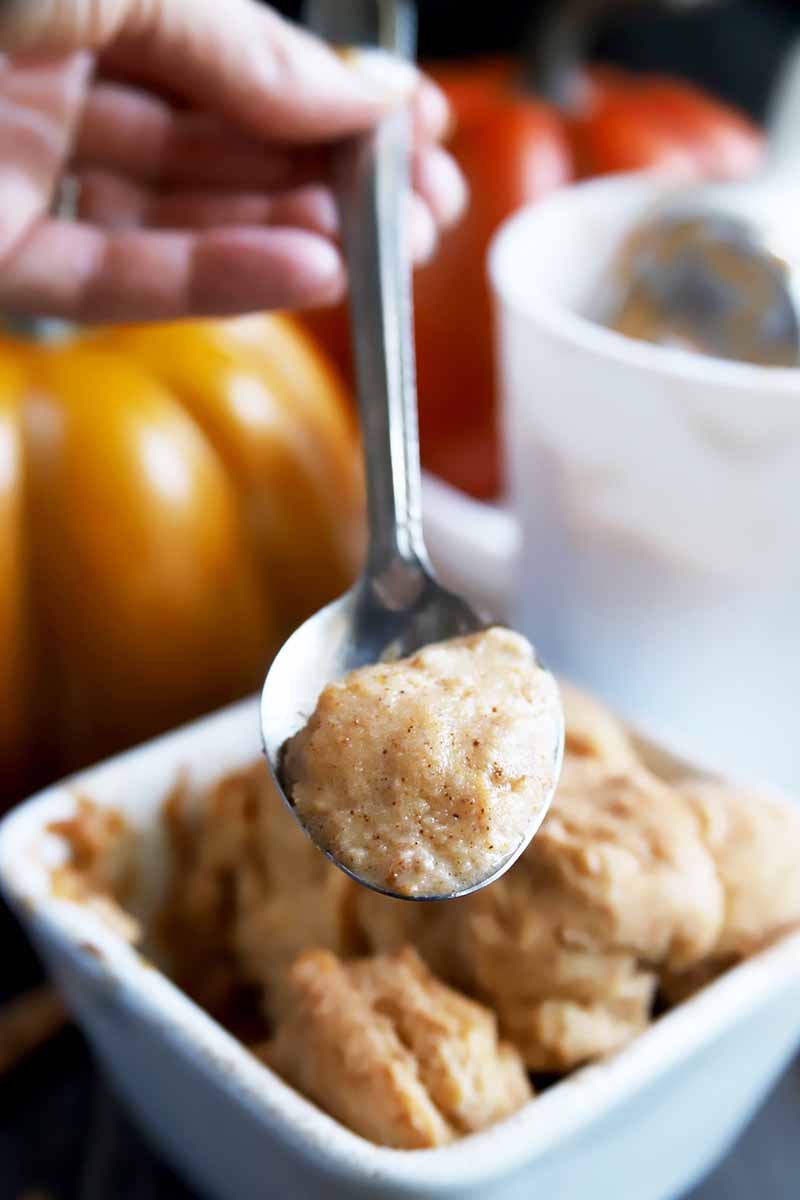 Pro tip for adults: whip up this ice cream with a little milk and a little vodka for a chilled cocktail that’s perfect for sipping during happy hour on a warm fall day.

This recipe can work really well doubled, as many ice cream makers are have a 2-quart capacity.

You know what fall tastes like? Pumpkin cinnamon ice cream. And this homemade dessert is one that you’ll want to shovel into your mouth. 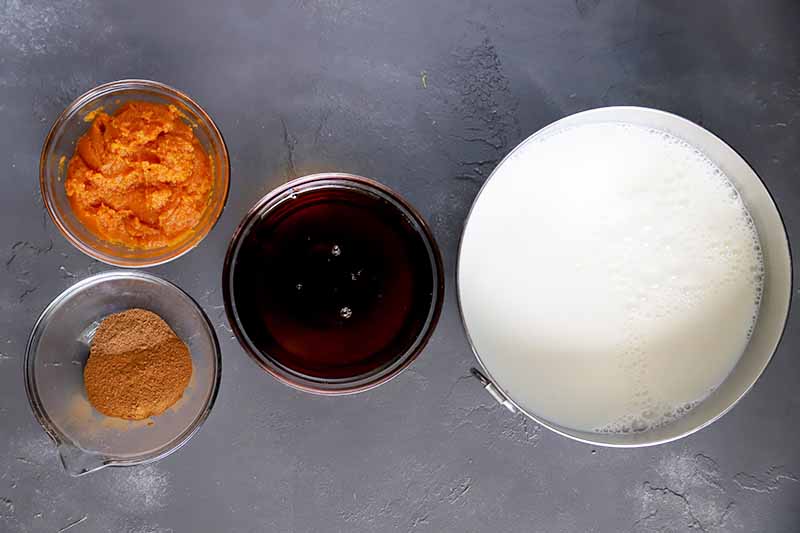 Make sure that you freeze your ice cream maker bowl for at least 24 hours before starting this recipe!

I like to use freshly ground cinnamon to make this frozen dessert, and Ceylon is my preferred variety for sweet recipes such as this one. You can read more about using cinnamon in sweet and savory dishes here.

Nutmeg can also be used freshly ground, for a bigger punch of flavor. But in a pinch, pre-ground versions of these spices will also work.

Just try to avoid using anything that has been on your spice rack for too long – though many types of dried spices do have a pretty long shelf life, ground spices will lose their potency more quickly than whole spices. And even whole cinnamon sticks and nutmeg will lose their flavor eventually.

You can also use canned premade or homemade pumpkin puree for this recipe. You can also try any other winter squash variety to puree. Just be sure to use the pure, unflavored variety. 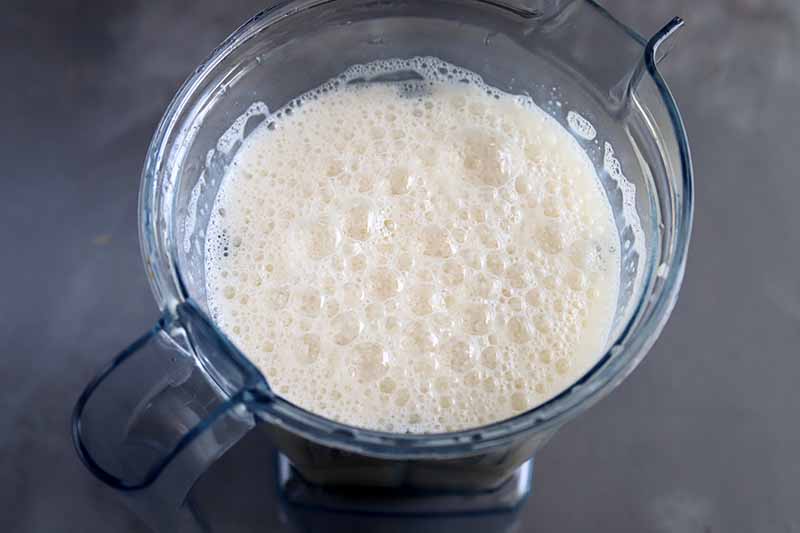 Add 1 cup of milk to a blender with the maple syrup. Blend for a few seconds on high speed until combined. 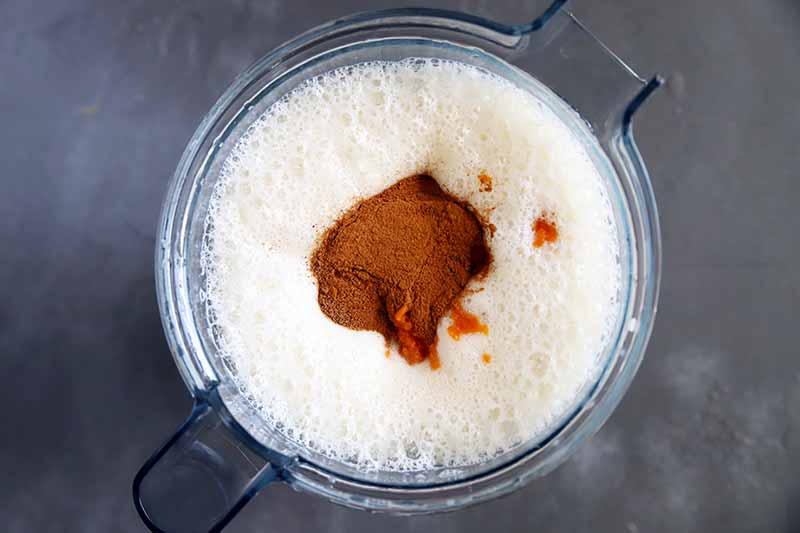 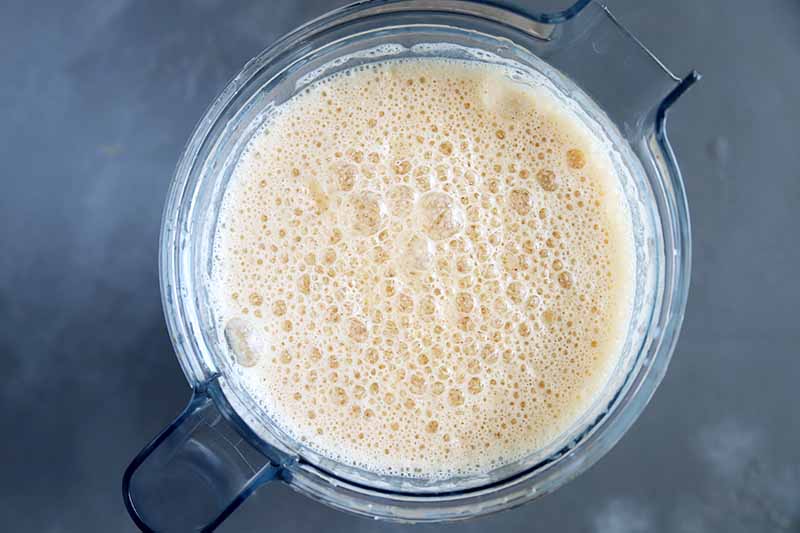 Add the rest of the milk and blend on low speed until combined, about 30 seconds to 1 minute. 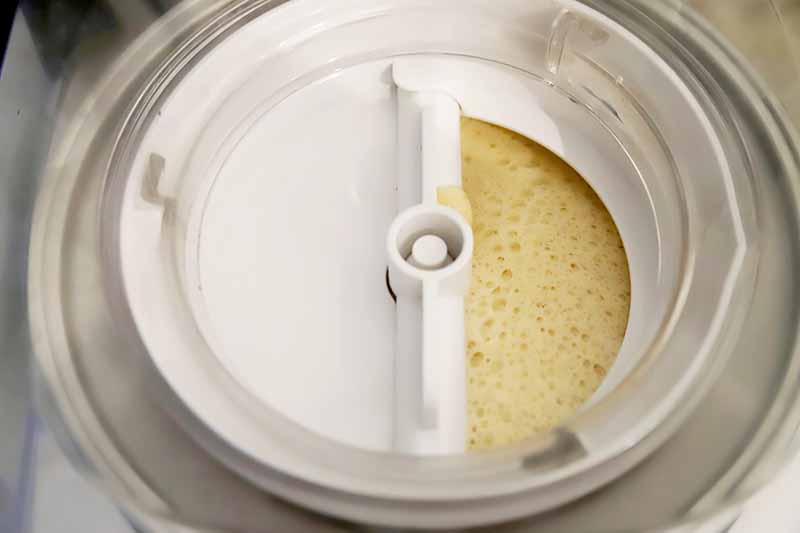 Transfer the base to your ice cream maker. Process according to manufacturer’s instructions. 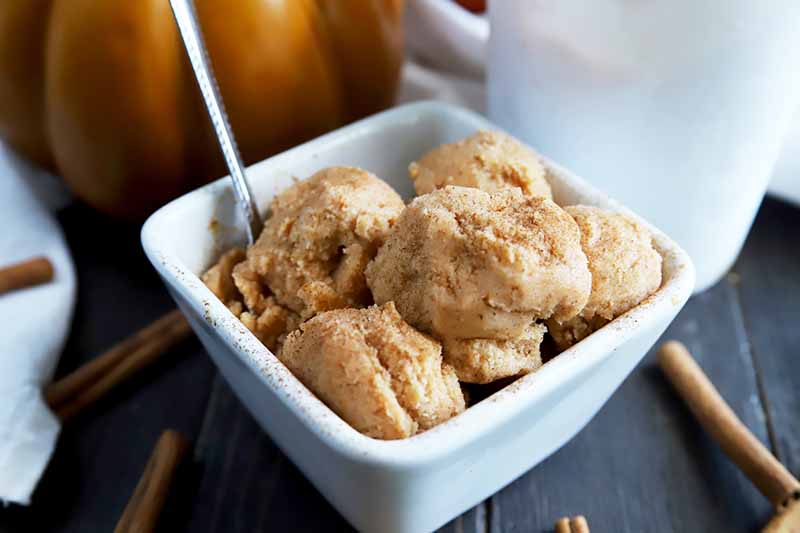 Place the semi-frozen mixture in an airtight container. Freeze for at least 4 hours, until fully set.

Serve with a sprinkle of freshly ground cinnamon on top.

Can I Use a Food Processor?

I know that not everyone has a blender. Some people just aren’t into smoothies, and prefer the convenience and variety of options offered by a food processor instead. 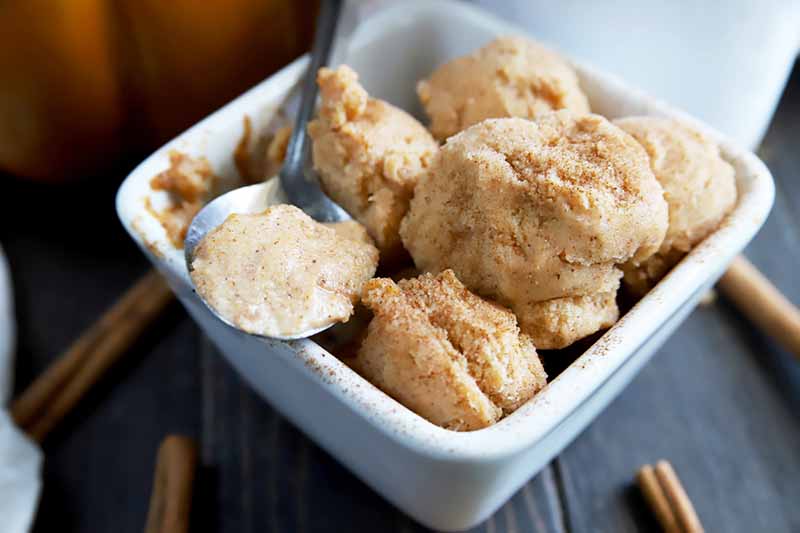 Guess what? You can totally make this recipe with your food processor. Simply add everything to the bowl, and process until it’s all mixed up and well-combined.

It’s that season when pumpkin recipes are aplenty. Craving even more? Here are some of our favorites:

Are you a cone or a bowl person when it comes to ice cream? Tell us in the comments below. And when you try the recipe, be sure to rate it here. 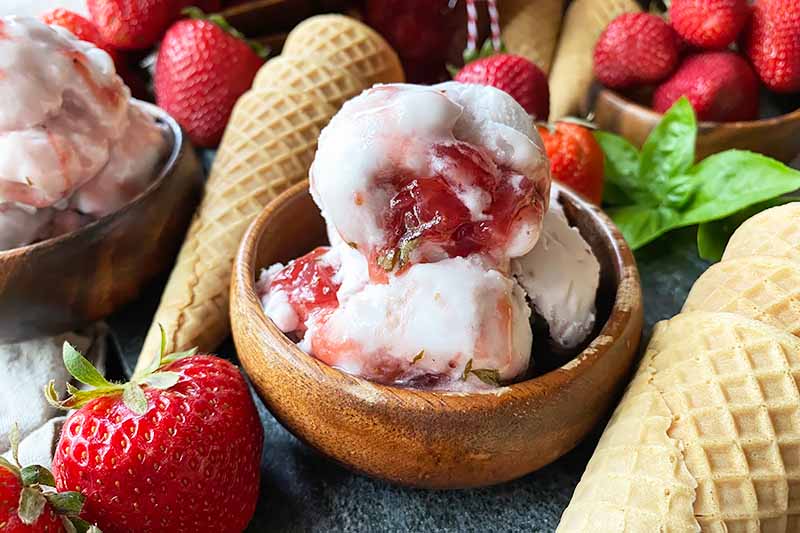 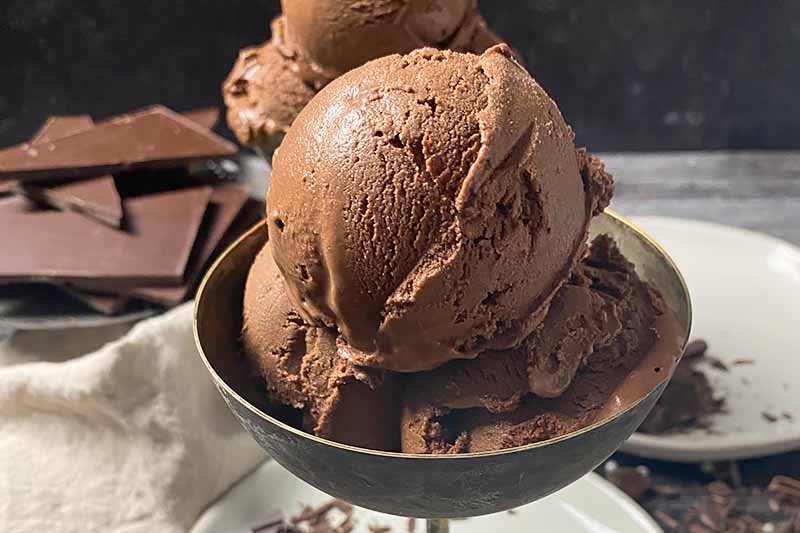 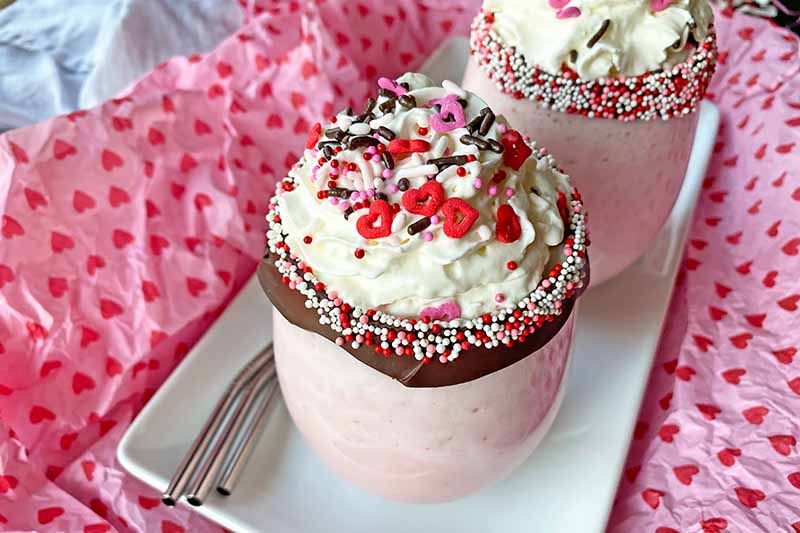