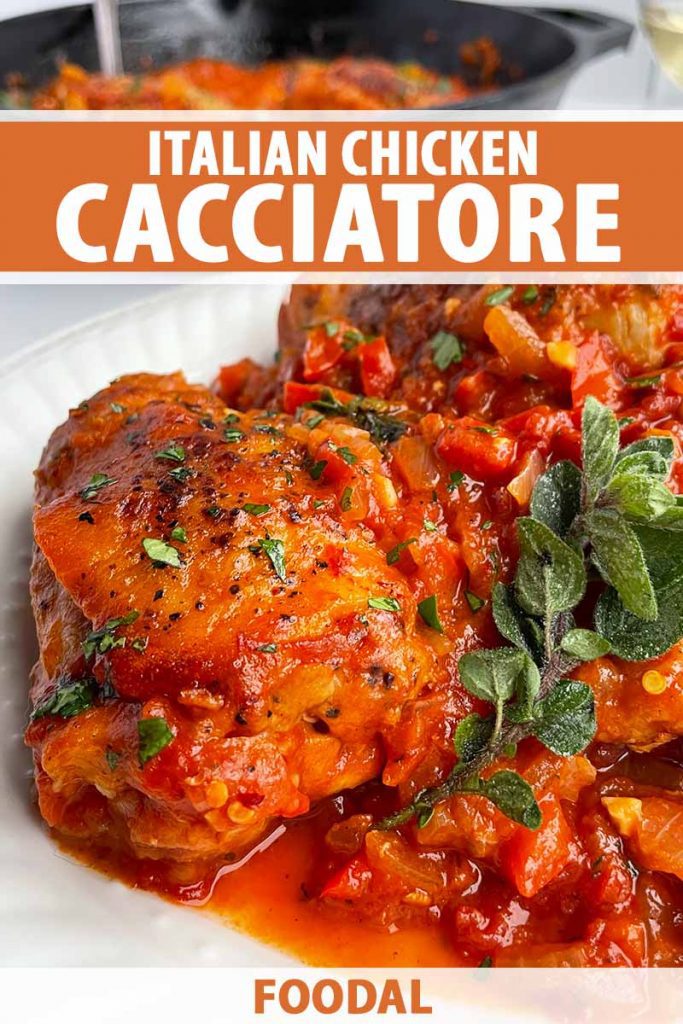 There are so many “classic Italian dishes” that it can be hard to keep up. From piccata to marsala to scampi and beyond, it’s understandable if you can’t remember the exact makeup of every single one. 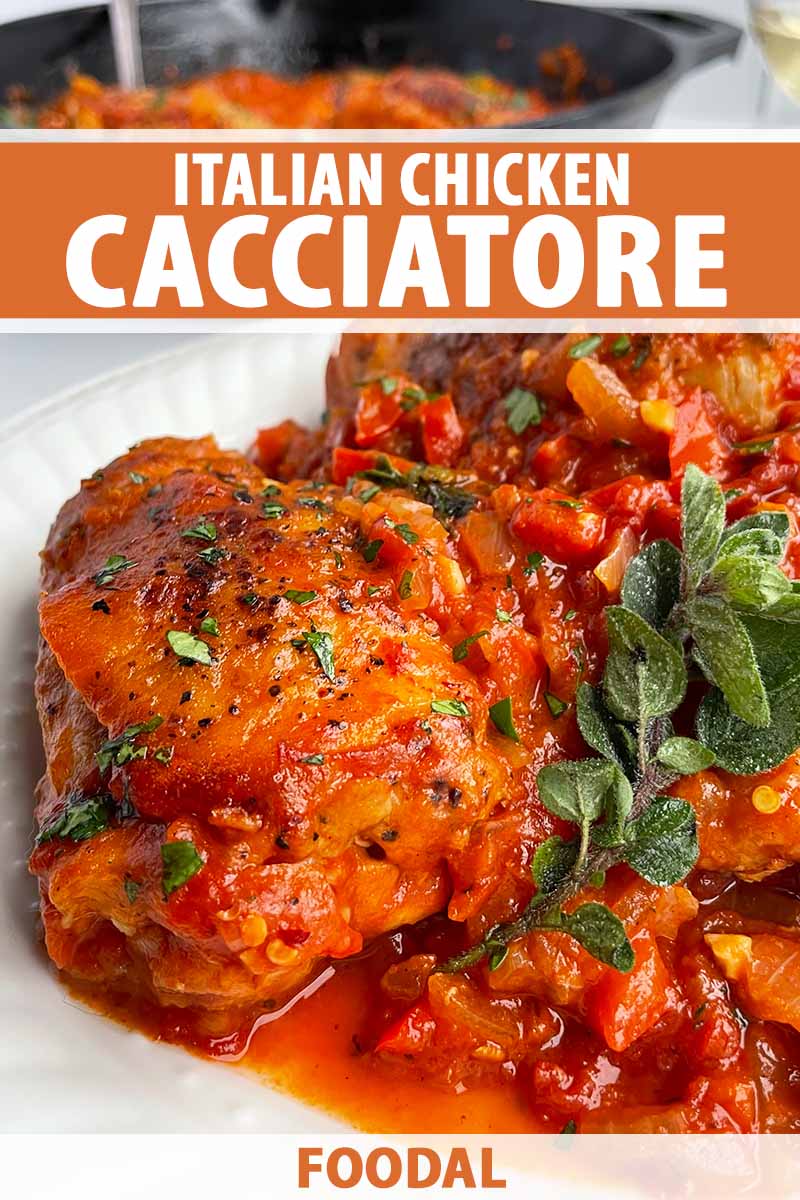 Unless, of course, you’re on a game show and the million-dollar question is which of the above is commonly made with capers.

But if what you’re after is an easy, one-pan, Italian-inspired meal that you probably already have all of the ingredients for on hand, chicken cacciatore is about to become your new BFF.

When I was first brainstorming to create my own version of this recipe, I knew there were several elements that were an absolute must. Traditionally, cacciatore is a hearty tomato-based braise of poultry, veggies, and wine, so you can count on all of the aforementioned ingredients making their way into the pot.

The Italian word cacciatore translates to “hunter” in English, while in the food world, “alla cacciatora” denotes a meal prepared “hunter-style.” That being said, we’re clearly not talking about some dainty little dish here. 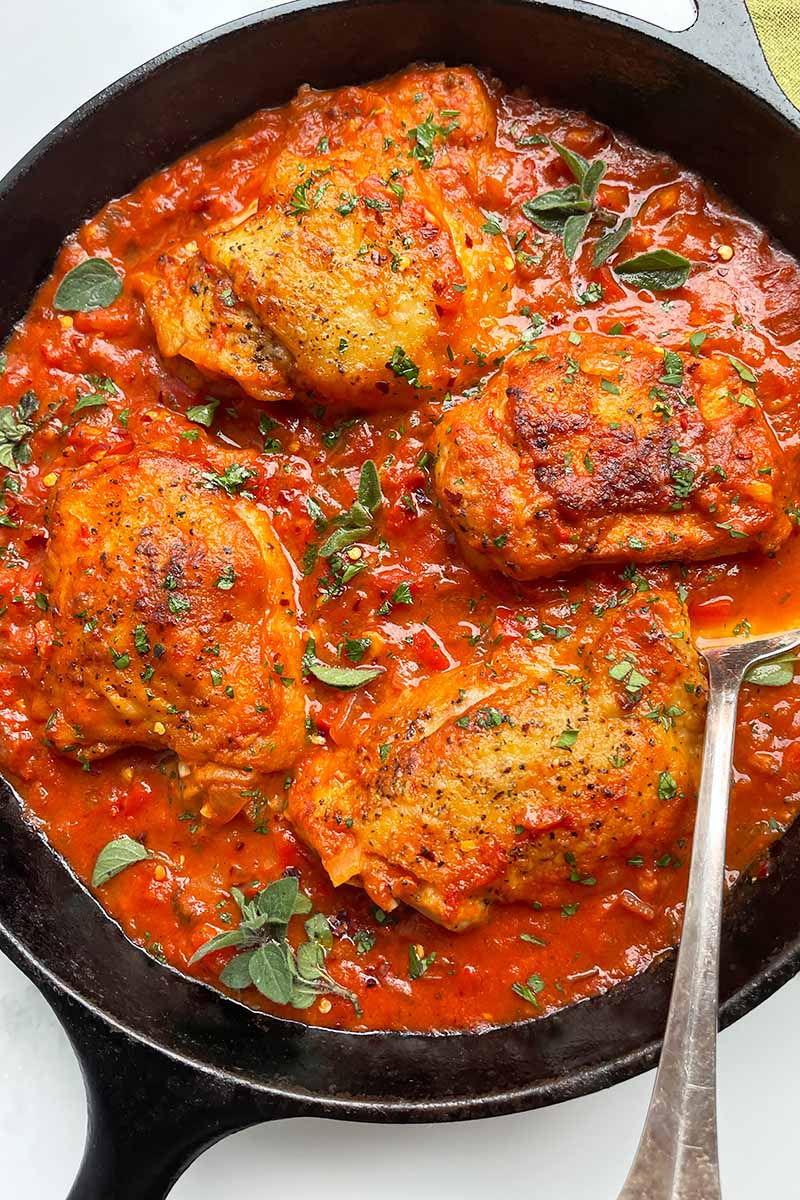 So, with many variations out there including mushrooms, olives, and all kinds of herbs, how do you know what to choose to construct your cacciatore?

My secret is simple: I start with what I like.

When it comes to hunter-style Italian fare, there are countless recipes rolling around on the web for chicken cacciatore that claim to be the original. So we take what we know and go from there. First, the protein.

Since it’s burly hunters who originally chowed down on something akin to the cacciatore that we know and love today during the Renaissance period, they likely didn’t swing into Whole Foods to pick up a fresh, free-range chicken. 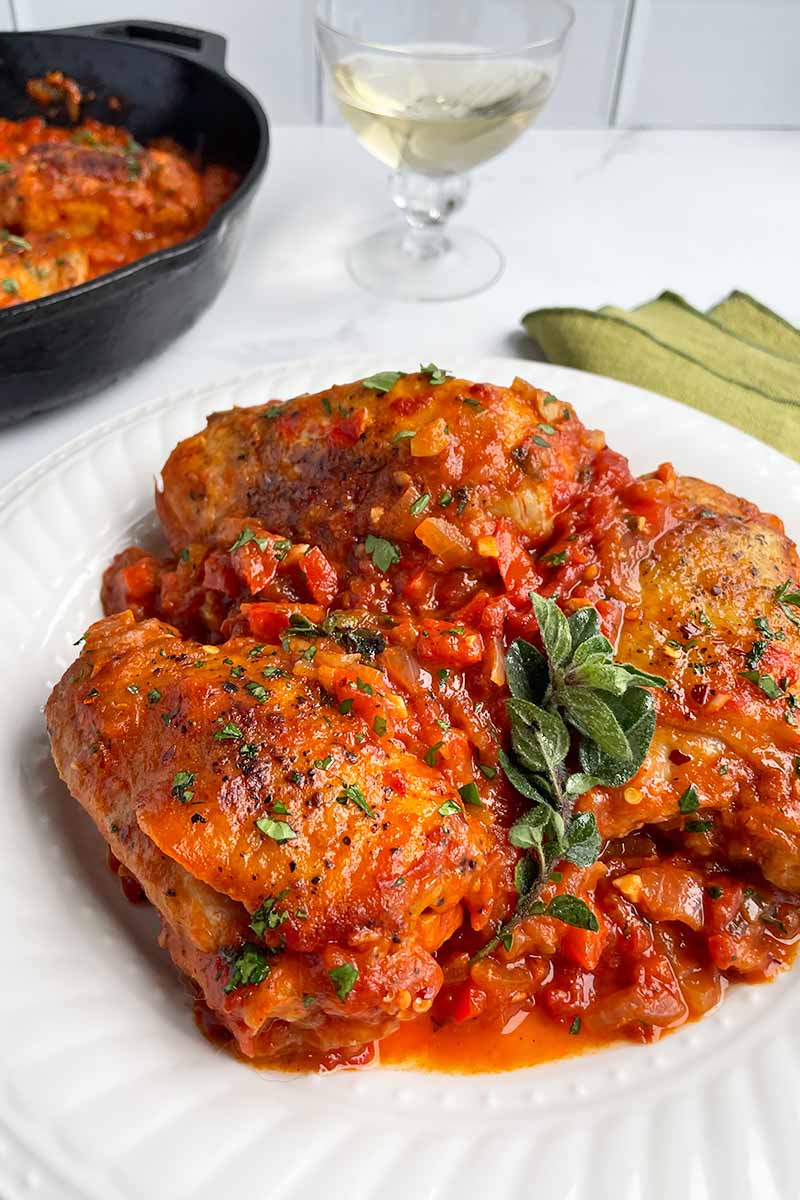 Though it’s okay if you do. Rustic is what you make of it, using what you have available, whether that be freshly-nabbed protein and wild foraged mushrooms and herbs, or ingredients sourced for your favorite purveyors.

Theirs was likely centered around pheasant, rabbit, or other wild game. I was all out of pheasant, so I went with a more modern approach and used chicken. Dark meat is a bit more forgiving if it’s overcooked, so thighs are what I reach for when a recipe calls for chicken to be simmered in a sauce.

However, I’ve run into several picky eaters who strictly stick to white meat, and for that reason, including both means everyone invited to devour this dish will be happy. Opting for bone-in split breasts also gives you a little extra insurance that the meat won’t become dry.

Don’t get me wrong. I dig boneless skinless breasts, but they have a time and a place.

Typically, I adore the texture of mushrooms in a comforting stew-like meal, but I didn’t want to overcrowd the pan with more veggies in this case. If you have some on hand, feel free to add them. And if you like your meals on the salty side, throwing in some briny olives really does the trick. 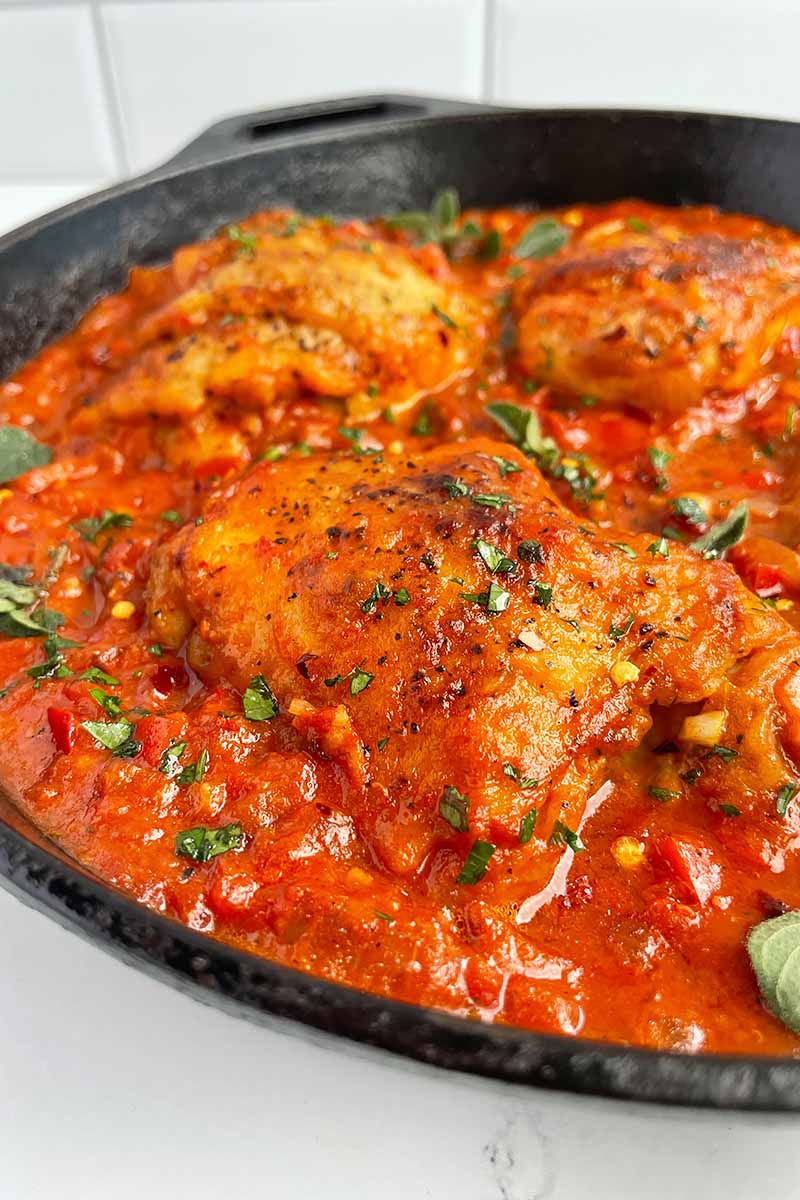 A riff on the classic mirepoix, to keep this recipe straightforward, an onion, garlic, and pepper party was just fine with me.

The red bell peppers not only add sweetness, which cuts the acidity of the tomatoes, but they magnify the crimson color of the sauce as well.

For me, cacciatore is the most foolproof choice when I’m scanning a massive Italian menu and just can’t make up my mind. You might find a similar stew on French menus as well, described as poulet chasseur (which again translates to “hunter’s chicken” in English).

When faced with a choice, my indecisive brain often bounces between something decadent with rich red sauce or something chicken-based that’s light and perfumed with wine. If this predicament sounds familiar, whether you’re dining out or concocting Italian classics in your very own kitchen, trust me when I say cacciatore offers the best of both worlds.

And what could be better when you’re on the hunt for the perfect dinner?

Try a bite of this rustic, herby, tomato-infused chicken cacciatore and you’ll understand why it’s a stellar pick for any night of the week. Get the recipe.

Use a large, sharp chef’s knife to cut crosswise through the chicken breasts if this hasn’t been done already, rocking your knife back and forth if necessary, and slice through the bone. You could also use kitchen shears. 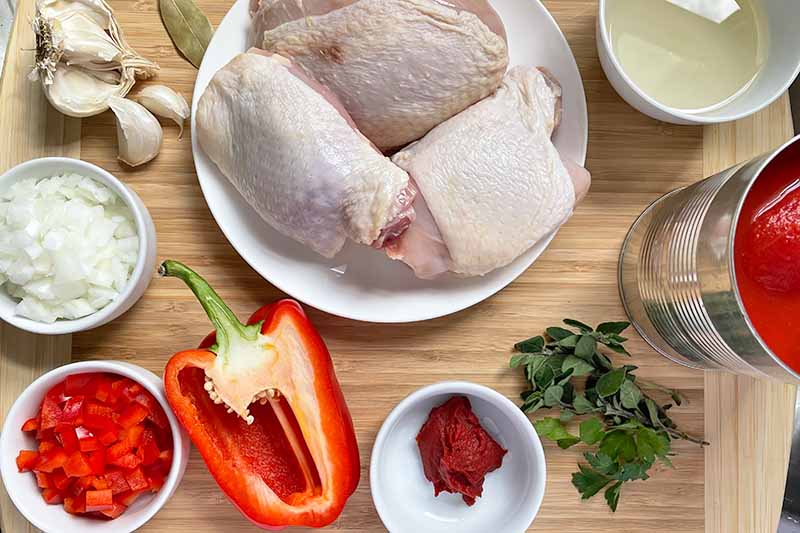 Chop the onion, pepper, oregano, and parsley. Mince the garlic.

Thyme or rosemary can also be used as substitutes for the fresh herbs. All of these are interchangeable in classic cacciatore recipes, so use what you like! Just keep in mind that rosemary and fresh oregano tend to have the most powerful flavor, so you may want to use these more sparingly.

Gather the flour, thighs and breasts, tomato paste and canned whole tomatoes, white wine, and a dried bay leaf, as well as your salt, pepper, olive oil, and red pepper flakes. Measure out all of your ingredients.

I prefer the texture of whole peeled tomatoes, which you can gently break up with a spoon in the pan. But you can substitute canned crushed tomatoes if you prefer.

Have one plate ready for the raw chicken once it’s been seasoned and floured, and another for the chicken after it’s been seared. Place the flour in a wide, shallow bowl or dish. 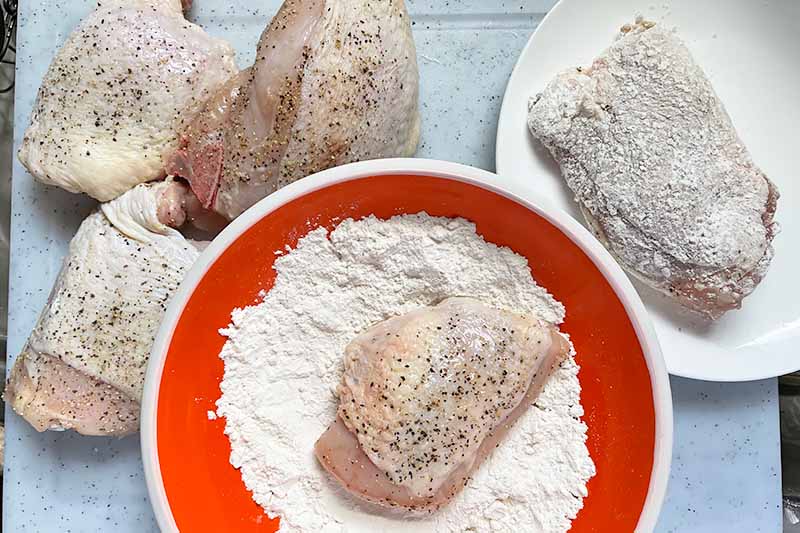 Season the poultry pieces all over with 1 1/2 teaspoons of the salt and pepper, and then dredge them in the flour. Gently shake off any excess and place the chicken on one of the prepared plates.

Add 2 tablespoons of the oil to a large heavy-bottomed pan like a Dutch oven or a cast iron skillet, and place it over medium-high heat. 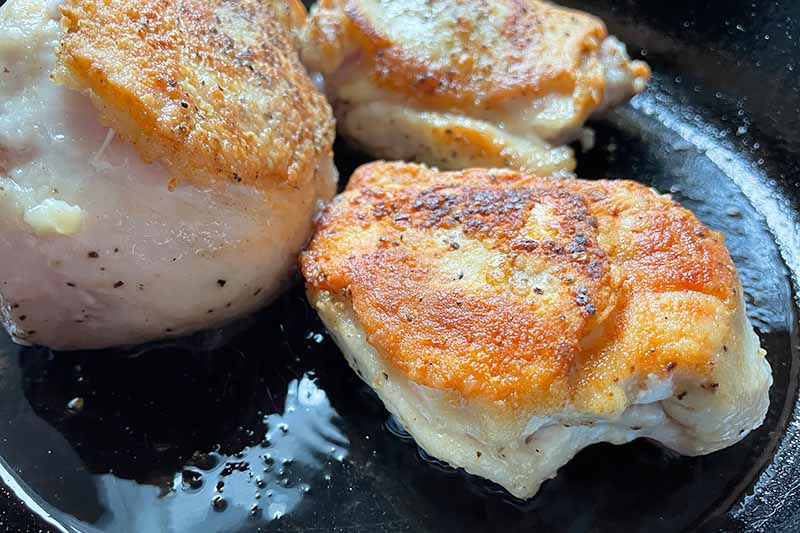 Once the oil begins to shimmer – but not smoke! – add the chicken to the pan. It’s best to work in batches so you don’t overcrowd your pan and lower the temperature of the oil too much.

Sear until a golden-brown crust develops, for about 2 to 3 minutes per side. Transfer the pieces to the clean plate that you set out.

Reduce the heat to medium and add the remaining oil. The skin will have rendered some fat into the pan, which imparts even more flavor to the veggies. 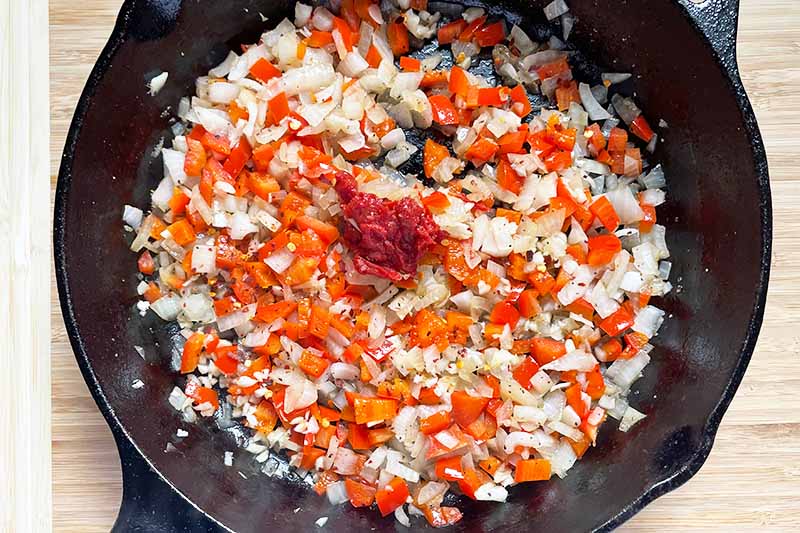 Many cacciatore recipes call for mushrooms, and if you want to add them, saute 1 cup of chopped mushrooms now. White button or cremini mushrooms make tasty additions that are easy to find at the grocery store, but wild foraged mushrooms would also be delicious if you have a source.

Saute the onion and bell pepper, stirring occasionally until the veggies have softened, for about 5 minutes. Season with the remaining salt and pepper, and the red pepper flakes.

Stir in the garlic and cook for 30 seconds, stirring occasionally until it’s fragrant. Add the tomato paste and cook for about 1 minute more, stirring to coat the vegetables.

Step 4 – Deglaze the Pan and Simmer

Pour in the wine to deglaze the pan, scraping up the fond (another name for those tasty stuck-on brown bits) to release them from the bottom, and simmer until the liquid is reduced by half. This should take about 2 to 3 minutes. 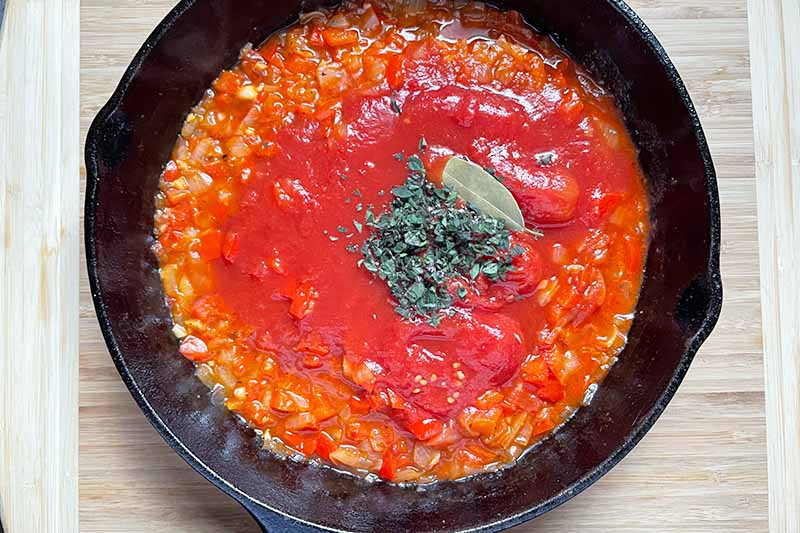 Add the canned tomatoes with their juices, along with the oregano and the bay leaf. Using the back of a spoon, gently crush the tomatoes to give them a head-start towards breaking down a bit, and stir to combine. Nestle the chicken pieces into the sauce, and add any juices that have collected on the plate to the pan.

Keeping the pan uncovered, bring the sauce to a gentle simmer and adjust the heat to medium-low as needed. Continue to simmer until the poultry is cooked through, for about 30 minutes. 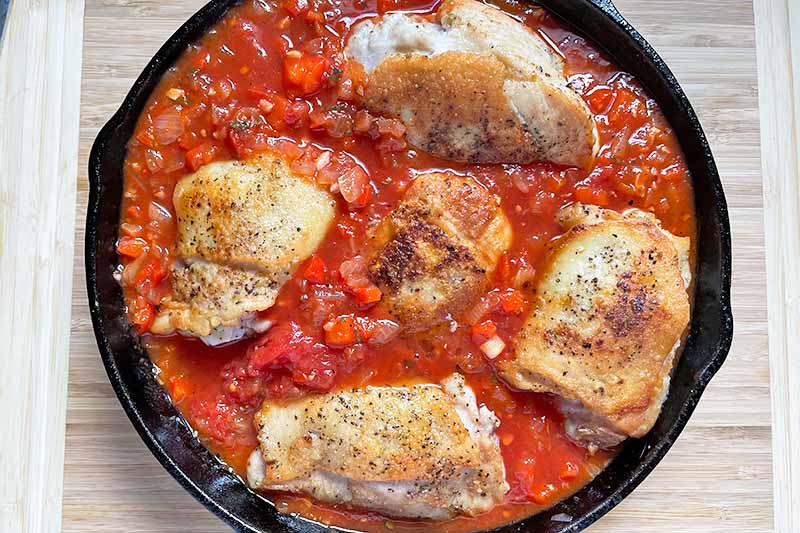 Dark meat typically takes longer to cook than white meat, but split chicken breasts tend to be very thick. The breasts may take 30 to 35 minutes to cook fully while the thighs may finish cooking in the sauce in just 20 minutes. Use a meat thermometer to make sure the internal temperature of the thickest pieces reaches 160°F.

If the thighs are done first, you can set them aside and cover them loosely with foil if you like. But dark meat is very forgiving and stewing provides delectable results – it won’t dry out with a little extra cooking.

Using tongs, transfer the chicken pieces to a platter. The sauce should be hearty and thick, but if it’s too thin, you can boil it for several minutes to reduce the liquid and thicken it up. 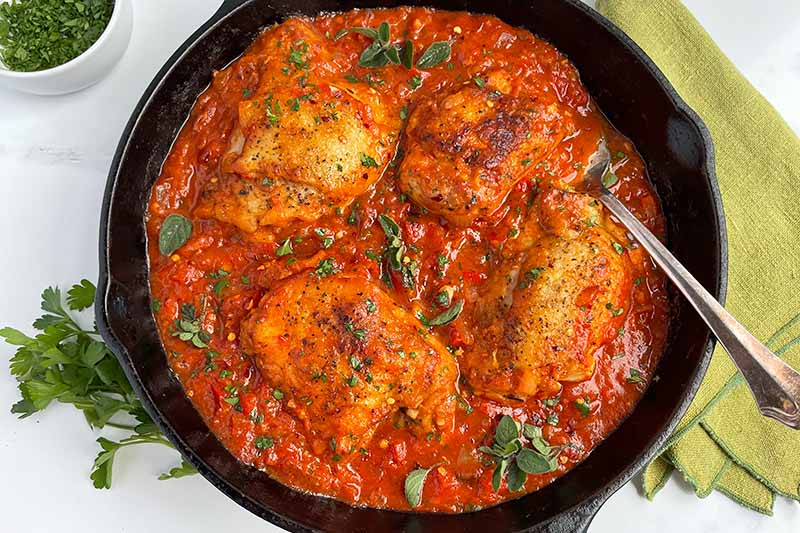 You can also stir in a tablespoon of capers or about 1/4 cup of pitted olives at this point to add some briny flavor.

Remove the bay leaf, pour the sauce over the top of the chicken, and garnish with the parsley. Serve with your choice of polenta, rice, pasta, or crusty bread.

Many Italian dishes are served with some type of carb to make sure you inhale every last drop of sauce, and chicken cacciatore is no exception. 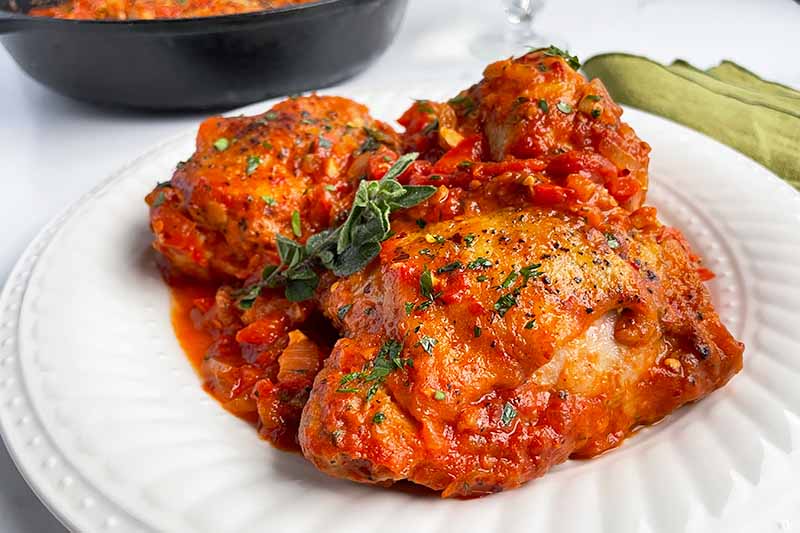 Crunchy bread is an obvious choice, as well as pasta, which just screams cozy Italian bistro where the carpet’s cologne is redolent with garlic and onions. But I often turn to polenta to put under my cacciatore and I dare you to do the same.

If you skipped the mushrooms but decided you missed them in the end, this creamy polenta with baby bellas will make everything all better.

How will you serve up your hunter’s kitchen at home? Tell us about your special tricks and ingredients to make this dish your own in the comments below. And don’t forget to give this recipe a five-star rating if you loved it!

There’s no denying that this one-pan poultry bathed in tasty sauce is a weeknight champion. Maintain your status as hero of the kitchen every night of the week by trying these chicken recipes next:

Nutritional information derived from a database of known generic and branded foods and ingredients and was not compiled by a registered dietitian or submitted for lab testing. It should be viewed as an approximation 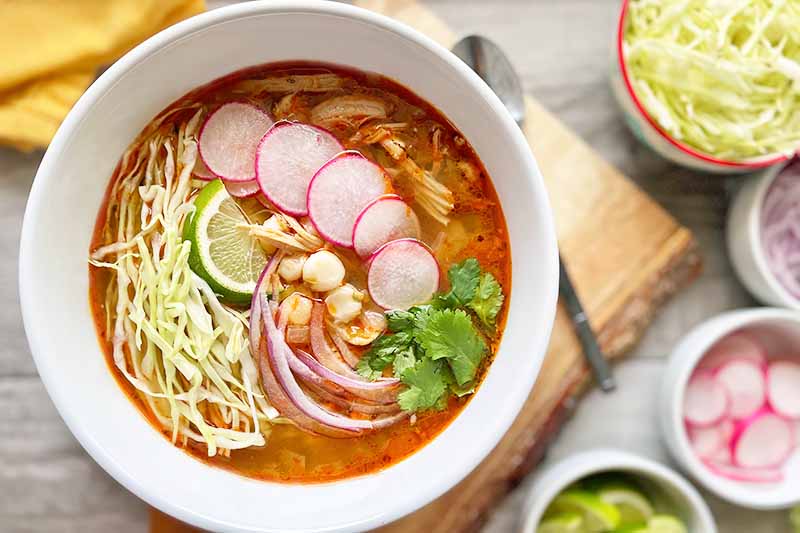