Gazpacho is a warm weather classic.

A raw soup that’s made from fresh produce and served cold, it’s like a salad in a cup, featuring the best of what the season has to offer. 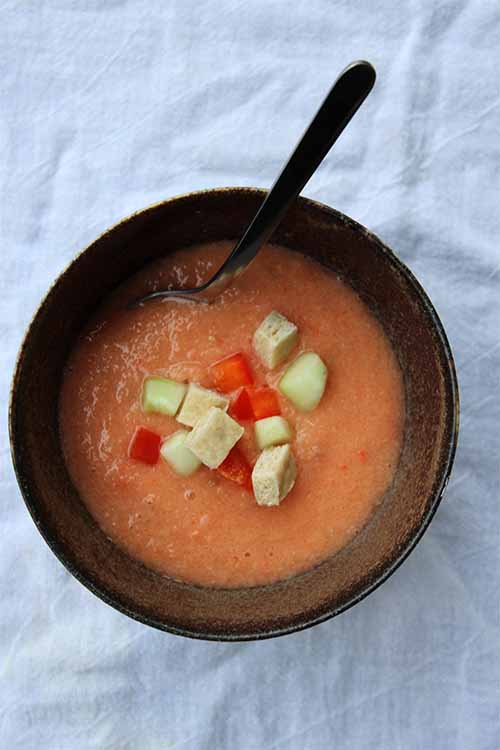 Packed with flavor and nutrients, it’s also a rather polarizing treat – while some were raised to love the stuff and look forward to its arrival with the warmer weather each year, others see it as a weird salsa-like abomination that they’d rather avoid.

One aspect of gazpacho that’s a little different than what you’ll find in many other cold soup recipes is the fact that it’s often made with bread. This helps to build body, contributing to the texture of the soup. 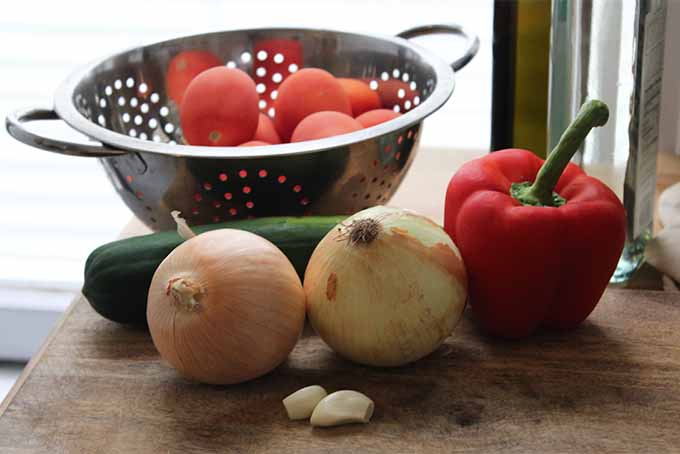 Topped with crunchy diced vegetables and toasted croutons, it’s rich and flavorful, the perfect start to your next summertime soiree. A touch of vinegar also helps to bump up the flavor.

If you’re in the latter camp (with those salsa folks), we hope you’ll take this opportunity to try it again. This recipe just might change your mind!

According to June Crosby and Ruth Conrad Bateman in their 1969 publication Serve it Cold!: A Cookbook of Delicious Cold Dishes, “We haven’t been able to pinpoint who made the first cold soup, nor where, but notable examples of this refreshment are to be found in many countries. And contrary to what you might think at first, just about as many are from cold lands as from the tropics or sun countries.” Nearly 50 years later, the jury’s still out.

Needless to say (but just in case you did need a reminder,) it doesn’t have to be hot out to enjoy a cold soup. Year-round, this recipe’s a winner at parties and family gatherings. 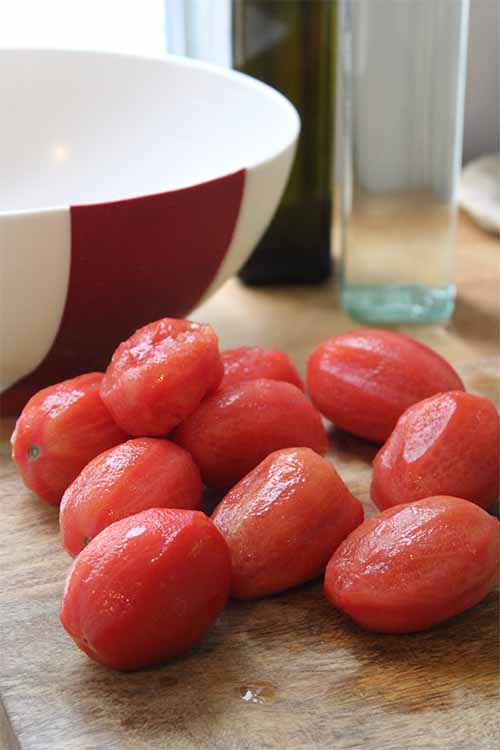 This is particularly the case if you’re lucky enough to live in a place like Southern California like I do, where local garden produce is available year round. Check local farmers markets to find out if hothouse, greenhouse, and high tunnel-grown varieties of tomatoes and cucumbers are available beyond the normal growing season.

If you’re hungry for more cold foods with a ’60s twist, Crosby and Bateman’s cookbook is available on Amazon. Also check out our round-up of Cool Cool Foods for Hot Hot Days (coming soon!) to enjoy those sweltering summer afternoons in super-chilled style.

Though you’ll find a variety of different types of gazpacho out there – from the white variety made with almonds, grapes, and garlic, to yellow or even green versions made with bell peppers and tomatoes of the same hue – ours is a more traditional take. It’s made with juicy red tomatoes, fresh from the vine.

Dying for an opportunity to efficiently use something up in the kitchen in your effort to make this? Day-old (or week-old) bread is the key, and it’s what you’ll typically find is used in Spain. In fact, according to some accounts, the original gazpacho was nothing more than scraps of bread, water, and olive oil mixed up in bowl – sustenance for the poor that lacked the health-boosting elements and vibrancy of today’s more colorful, flavorful, and veggie-rich versions.

What’s the most important thing to keep in mind when you’re gearing up to prepare this tasty recipe? Fresh vegetables (and fruits) that are bursting with flavor make for the best chilled gazpacho! 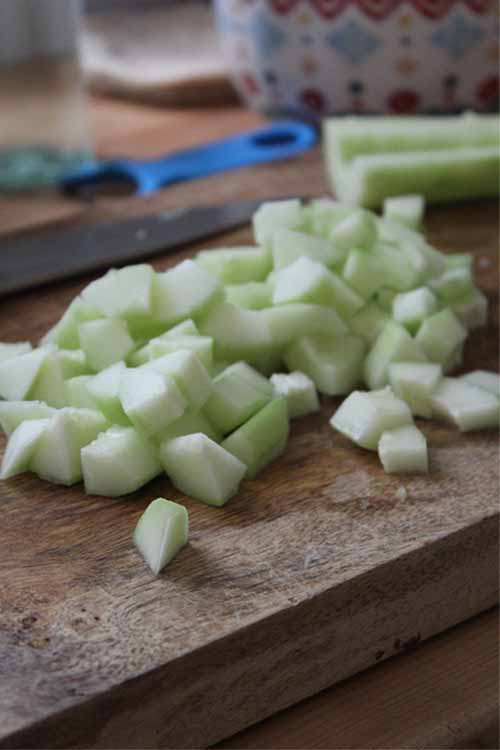 This isn’t the time for pulling your fresh-frozen bell peppers from the freezer, or opening up a big jar of home-canned toms. If you want a soup that’s big on flavor (and nutrients, too) get thee to the backyard garden or the farmer’s market!

Cater to Your Tastes (and a Second Helping of History)

Though this particular version is considered a classic, feel free to experiment and make a soup that’s unique to your own seasonal favorites, featuring locally available vegetables and fresh herbs. Got a blender and a fridge? The sky’s the limit!

You also have the freedom to experiment with texture to your heart’s content. Like it super smooth? Time to get out the high-speed blender. The Vitamix 5200 is our go-to favorite.

Maybe you want to add a little more liquid to create a thinner base. You could use water, or even chicken broth. But you definitely get bonus points if you make your own homemade tomato juice to add to the mix. This is probably the perfect ingredient to add since it’s fresh and bright, and won’t water down the flavor mixture that you’ve so carefully crafted. 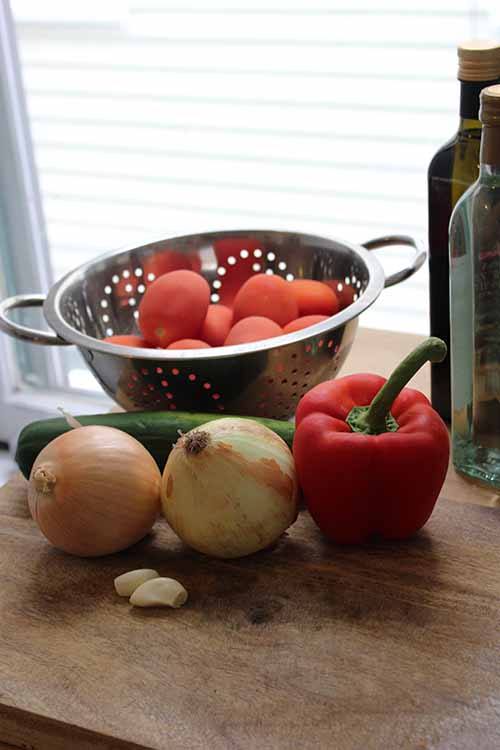 In the mood for something a bit more on the chunky side (… dare we say bordering on salsa territory)? A few quick pulses in the food processor, and you’re ready to go.

According to the history of this cooling dish, it used to be made by bashing the vegetables into bits, using a mortar and pestle. Though this will certainly be more time consuming than the blender or food processor method, it’s definitely worth a try (if only to say you did it)!

You’ll notice that if you make it this way, you’ll avoid overheating your produce like sharp motorized blades might, and you won’t inadvertently create a foamy mixture as is common using the electric processor. 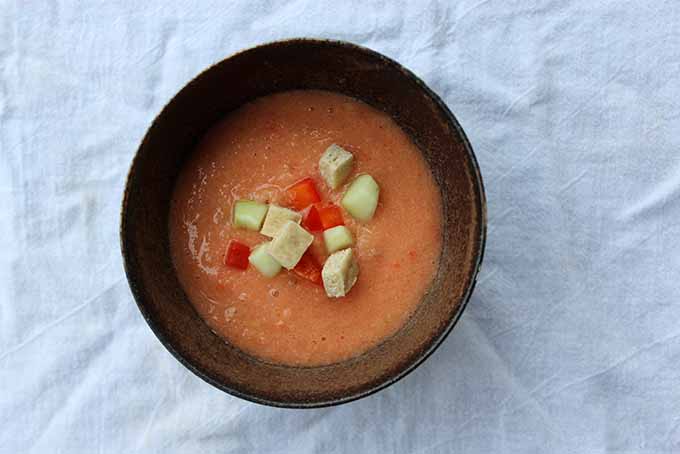 If you think gazpacho’s got you sold to the chilled soup camp, we’ve got 20 other gazpacho-esque cold-served soup recipes for you to try for keeping cool in the summer heat. Check them out! 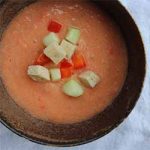 Step One – Soak the Bread

Soak two slices of bread in water. This will help to soften the stale bread, enabling it to blend easily into the soup.

Peel the tomatoes. Using an appropriate peeler like one of the models reviewed here is key to getting this task done efficiently. 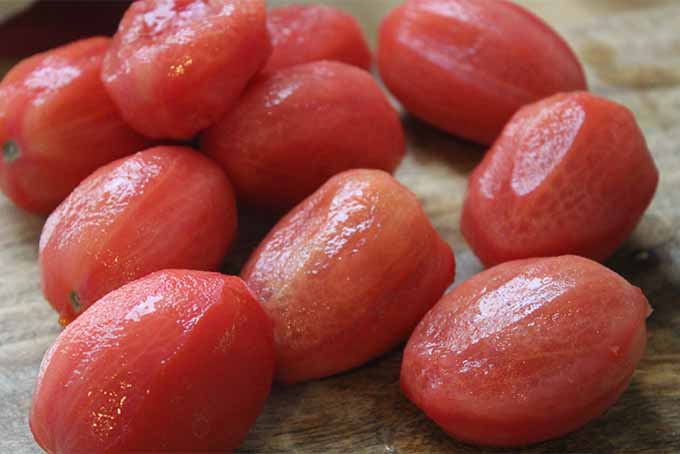 Scoring and then blanching your tomatoes quickly (for just a few seconds) in a big pot of boiling water can help with this step. Just dunk them in a bowl of ice water after blanching and the skins should peel right off.

I’m a firm believer in the Kuhn Rikon Y-Style Peeler, which we included in the above referenced review on Foodal – it will slide the peel right off without slipping along the skin.

Then peel the cucumber, slice it vertically, and remove the seeds. This may be accomplished easily by sliding a spoon straight along the core. 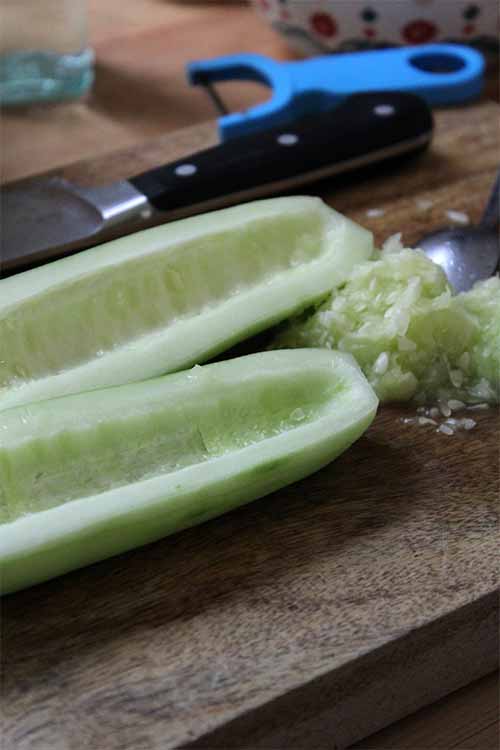 Wash the red bell pepper and slice it in half. Remove the seeds and stem.

Reserve about a third of the cucumber, half of the pepper, and one of the onions for later. 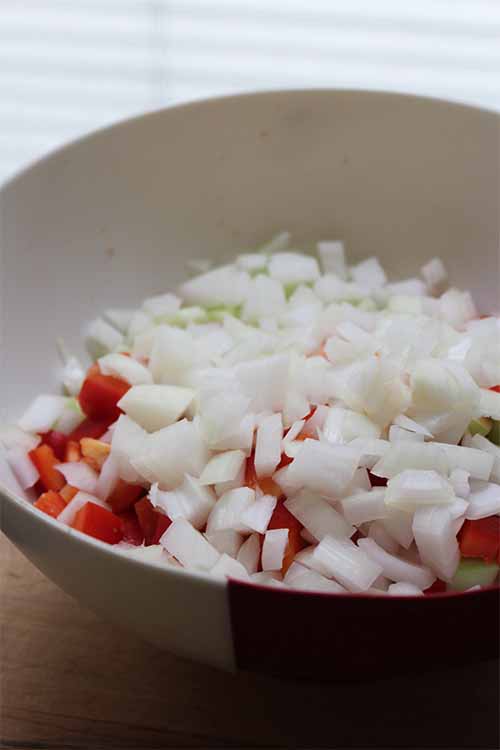 Give the rest of the vegetables a rough chop and toss them into a blender. A food processor or immersion blender will also work for this step, but a high-powered blender will get the job done most efficiently.

Add the soaked bread to the blender along with about 6-8 ounces (200 milliliters) of water, and your tomatoes.

Start with a teaspoon of salt. You can season to taste later on, so be careful not to add too much salt here in the beginning.

Blend your soup until it is smooth, then gradually add the olive oil and white balsamic vinegar.

Let the soup cool in the refrigerator until you are ready to serve. When stored in an airtight container, this soup keeps nicely for a couple of days.

The flavors continue to develop as it sits, so this is an excellent dish to prepare ahead of time.

With the remaining bread, make croutons.

Cut the bread into small cubes, toss with oil – a high-quality extra virgin olive oil is best – and roast in a pan until crispy.

Keep a close eye on the croutons while they are cooking – they can go from just right to bitterly dark in a matter of seconds.

When you are ready to serve, top bowls of ice cold soup with your diced vegetables and croutons.

So what are you waiting for? Those fresh garden vegetables aren’t going to wait! 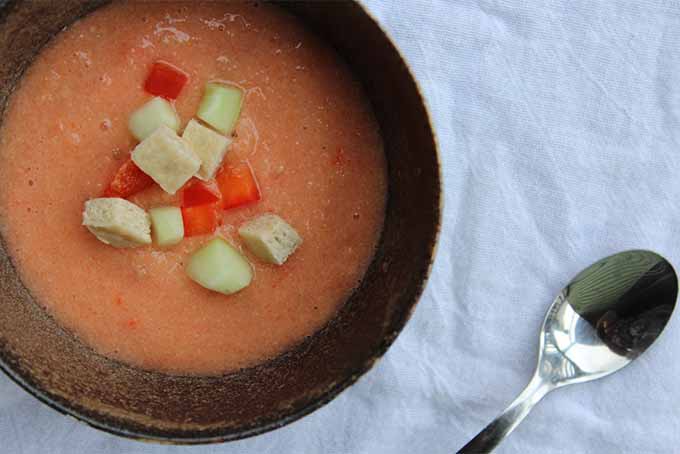 If you’re on a roll with the chilled soup thing, check our our recipes for cold cucumber soup, creamy coconut soup, and our round-up of delectable sweet and savory recipes from around the web, coming soon!

What’s your favorite version of gazpacho? Did our recipe convert you from a hater into a lover? Let us know in the comments! 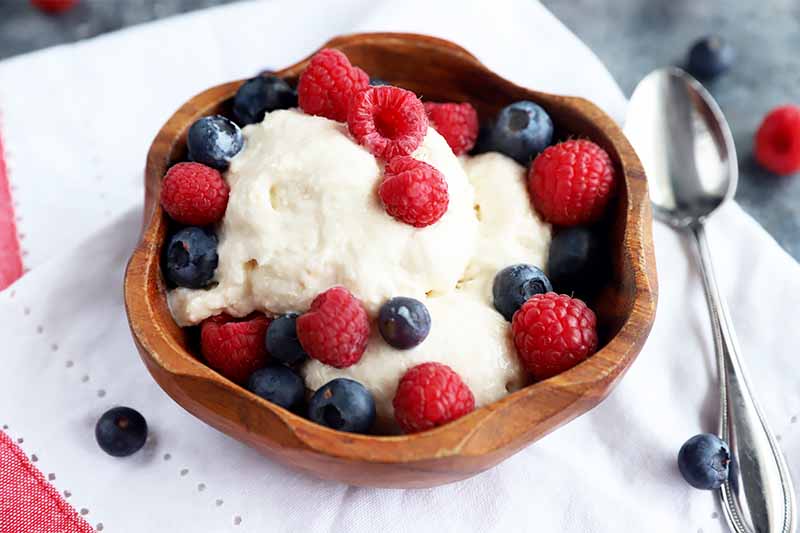 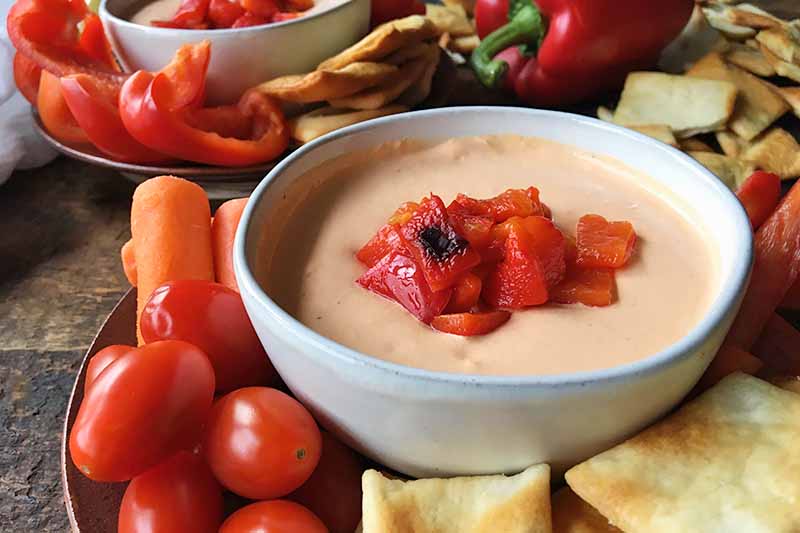 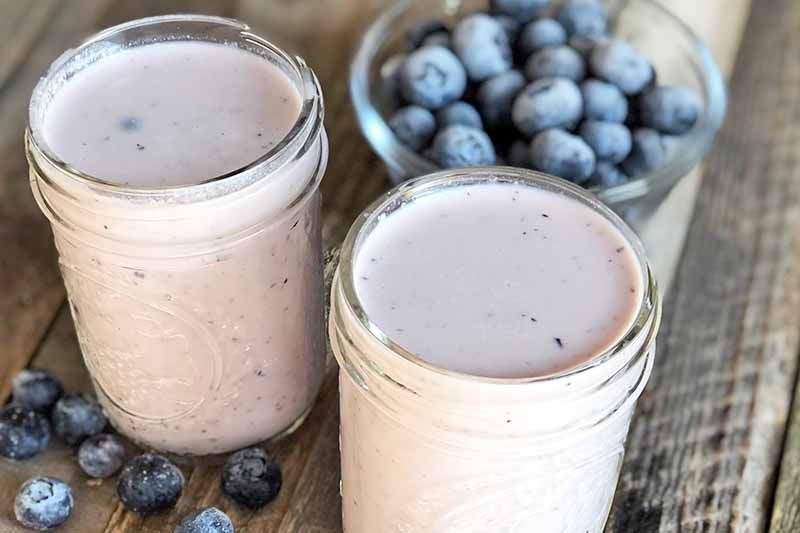 5 thoughts on “Make Your Own Gazpacho at Home”