First, let me say this: it is not ALL men who can’t do housework properly. There are a select few men, who do housework beautifully, who cook more than just barbeque, and who make ideal house husbands because they are just so good with all things domestic. 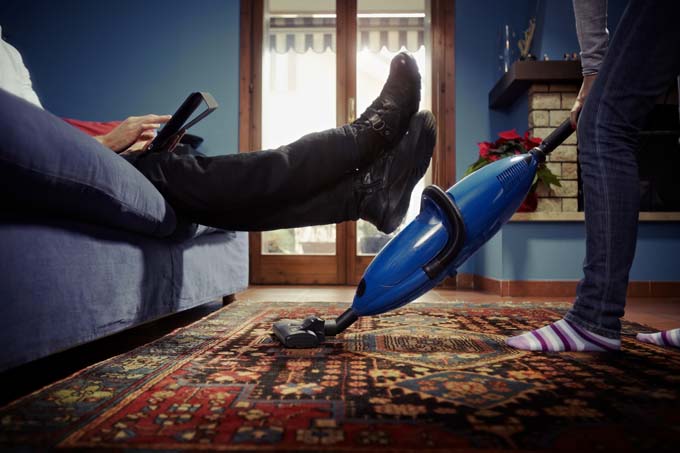 This, however, is NOT the norm. In most cases, your average guy doesn’t have a clue. My husband walks in right past the overflowing trash can, then leans on it when he tells me about his day and knocks it over.

My son isn’t a lot better. I can tell any of my three males to clean up around themselves.

They look over the empty drink cup, the discarded socks on the floor, the plastic wrappers that have drifted to the carpet – and say with complete sincerity, “What mess?”

I have come to the conclusion that this is a little-studied flaw on the broken Y chromosome.

Women can see messes and chaos because they have to keep babies alive and away from rats, germs, and the assorted icky things that happen to cake when hidden under a bed for a month.

Men, like dogs, prefer keeping gross things around. Perhaps to cover up their scent, for the same reason dogs roll in poop?

But I’ve lived with males my whole life, and I’ve seen things that make my skin crawl. I have to wonder. 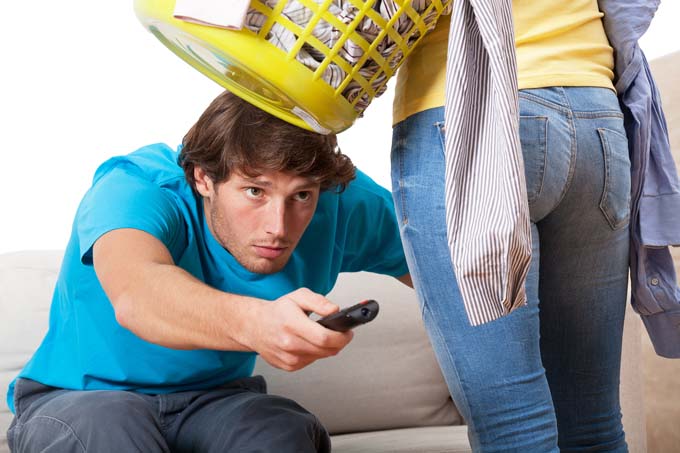 While in the Army, I worked closely with Public Affairs and  Information Operations and in these two closely related fields, one learns how to “shape the battlefield” without firing a shot.

There are ways you can help your males with their handicap without nagging or a larger battle, and make your own life easier and much more pleasant.

After all, there are better reasons to scream than seeing the turkey bone that somehow made its way under the couch.

This is great for cleaning out your closets – and clutter is notorious for holding dirt. So eliminate the clutter. Sell your old books, cups in the kitchen, the extra chair he’s always getting around to fixing.

If he complains, smile sweetly and show him the wad of cash you wisely pocketed prior to the sale.

“Look how much I’ve made already, honey! Don’t you have stuff to sell? I think some of these guys are looking for tools.”

With most men, you should see junk moving onto the front yard fairly quickly. When he doesn’t help you clean after the sale, the trash can is at the curb. If he was ready to sell it, he doesn’t need it.

2. Cater to his obsessions

So you have a man who loves sharp knives? Take him to a chef supply store, Williams Sonoma, or browse Amazon, or read our guides and reviews at Foodal and let him admire at all of the kitchen gadgets.

Men love toys. Lead him over to the knife section or online reviews. They also love things that cut. He’ll find the best set.

When you get him home, ask him to use those new knives to chop things up. He may not peel the potatoes, but if you’re clever and patient, you’ll have a sous chef working for you, and maybe even a real chef.

There are other things you can do: if you have a handyman, tell him how HARD it is to get the wood floors in the dining room clean.

If you have him figured right, he’ll do something about the floors to make it easier for you to clean – and that will be helpful.

3. Don’t try to control everything

Let’s face it: all us women do it. We know everything there is to know about housework, so when he’s polishing the furniture in the wrong way or stacking the dishes wrong, we go and correct it. He sees us do it, shrugs, and thinks, why bother next time?

If he’s nice enough to load the dishwasher, don’t worry about whether the forks are tines out or the dishes all face the right way. Chances are, everything will get clean. And if it doesn’t, it’s not a big deal to run it again.

Either let him do it his way, or don’t ask him to do it at all. 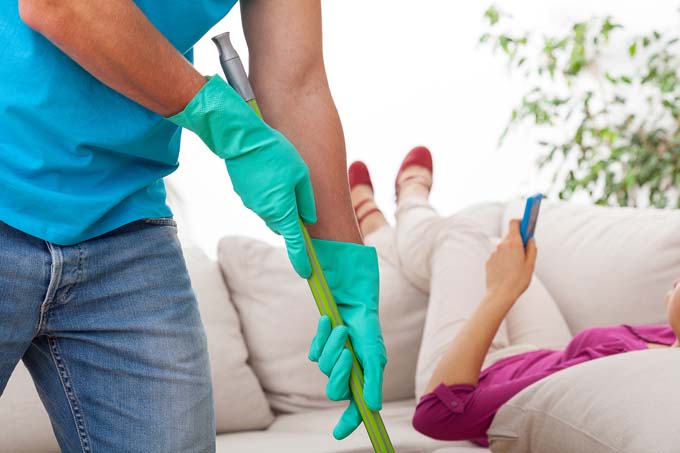 4. You don’t know all the answers

Even though he doesn’t do housework on a regular basis, he might have some solutions you never thought of.

5. Teach him how to do stuff

Without contradicting #3-4, show him how to do the things he doesn’t know. Most men get out of adolescence without once cleaning an oven, ironing a shirt, or scrubbing the baseboard.

Don’t expect him to know how to do it. Ask him if he’ll help you if you teach him what to do.

How often do you ask him to do things, instead of just expecting it? You can’t expect spontaneous help from most men.

They just don’t work that way.

Instead of being resentful, look at yourself as the household manager, an old and venerable women’s role.

Your job, as manager, isn’t to do everything yourself, but rather to see to it that things get done. This means giving orders, training, and supervising things without being overbearing.

7. Remember that men are by nature problem-solvers

So what if he uses steel wool on your new copper pan? He’s trying to solve a tough problem – stained copper – and this is how he’s going about it.

My husband picks up his clothes with his toes. So what, as long as they get picked up? Let him do it his way. 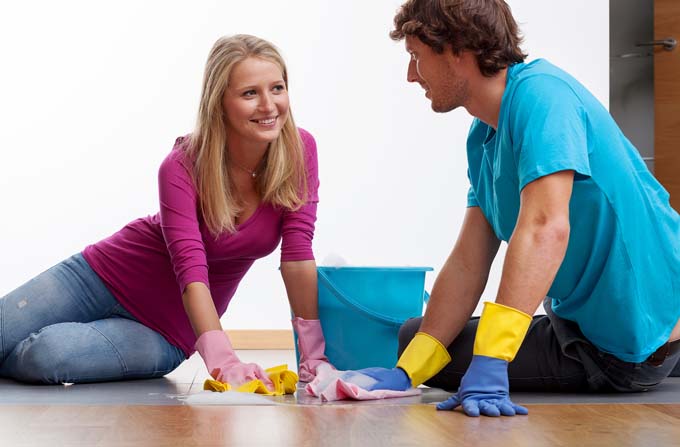 8. Remember that housework and not your husband is the problem

He’s the man you love, and your partner. The housework is the problem you must solve together. Keep it in perspective, and remember that he doesn’t necessarily look at housework as a problem. You must guide him to that realization.

9. Give him credit for what he does do

You may not see it, and he won’t make an issue of it – but fixing the broken sink when he finds it, carrying the heavy stuff out to the car, and maintaining the yard all fall in the category of housework.

It’s not fair to ask him to take on the part that you’re doing as well if he’s already doing a lot around the house.

In other words, just like he may not be able to see the mess right under his nose, you may have conditioned yourself to not see the things he does.

Stop, think about it, and list on paper the things he’s done over the last month.

Then slip into something sexy and reward him for it in the way you know he likes best. There is no better incentive than recognizing all the things he’s already doing around the house.

10. Remember what incentivizes a man: sex, food, masculinity, and gadgets

We waste money at sales because the deal is just so good; men waste time saving time because it’s such a good life deal. Men will also do things that they know will make you happy. 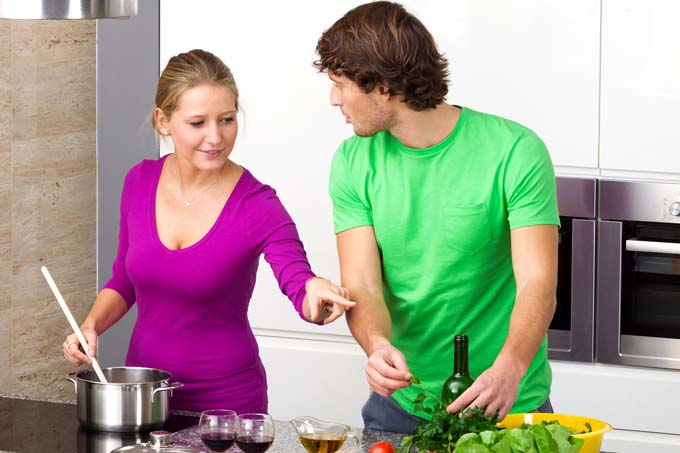 If you don’t have kids, vacuum the floor naked, and tell him you’ll stay that way as long as he’s polishing the tables.

Make it into a game.

When he stops, put on the ugliest robe you own, and tell him it stays there til he starts helping out. Chances are, he’ll work faster and harder, and you’ll both have a nice little bonus when you’re done.

If he’s working on the car, go out and bring him tools. If he’s mowing, go out and pick up the toys your daughter left laying around. Women often don’t notice the things THEY don’t do for men – we’re pretty self-centered.

13. Buy a barbeque, a really nice one

Men who won’t step near a stove will happily barbeque all evening. Get a stock of paper plates to go with it, and a nice cooler, and enjoy your nights off.

If you want more than just meat, though, you may have to guide him into grilling you veggies or shishkabobs.

14. Talk to him about this article, and laugh with him

He may agree or disagree with any one of these points – all men are different – but the point is, if you’re talking about why he doesn’t do housework, and you’re admitting that you may have some flaws here too, you’re bound to at least understand where he’s coming from, and he’ll start understanding you as well.

15. If all else fails and you can afford it, hire a maid

Then when she’s done cleaning the house, go out to dinner – he pays. This is a lot nicer than stewing for a week because he won’t do anything, and it makes both of you pick up the clutter so she’ll clean everything she’s supposed to clean 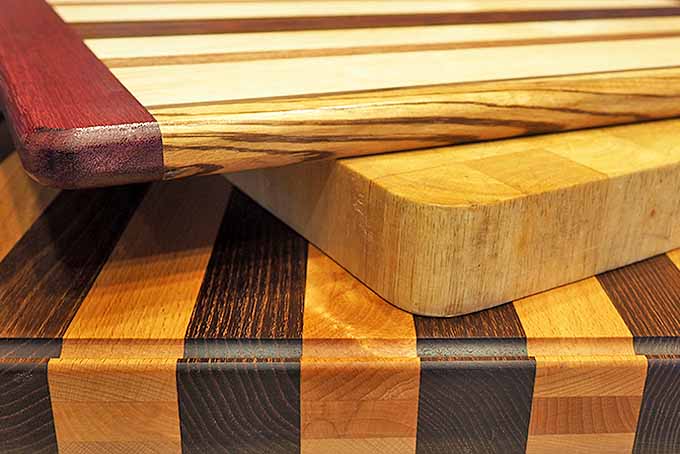 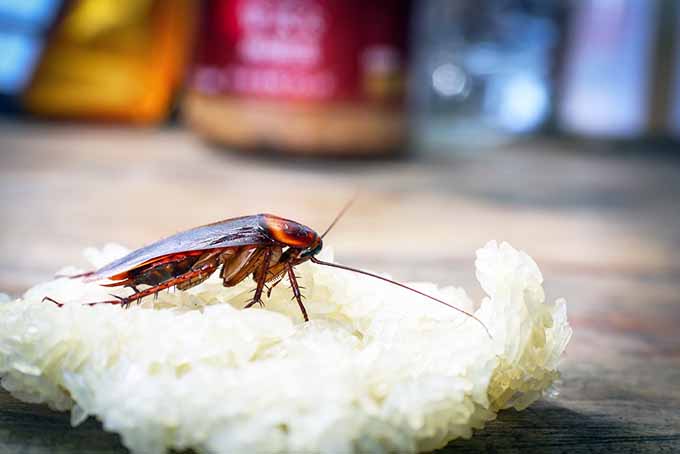 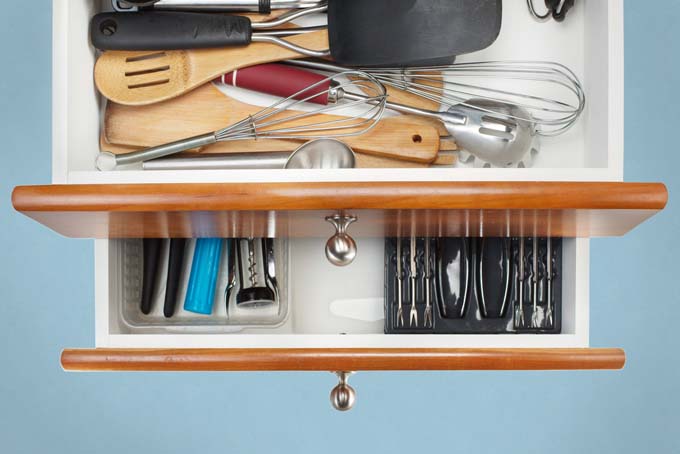 42 thoughts on “How to Get Your Husband Involved in Housework”