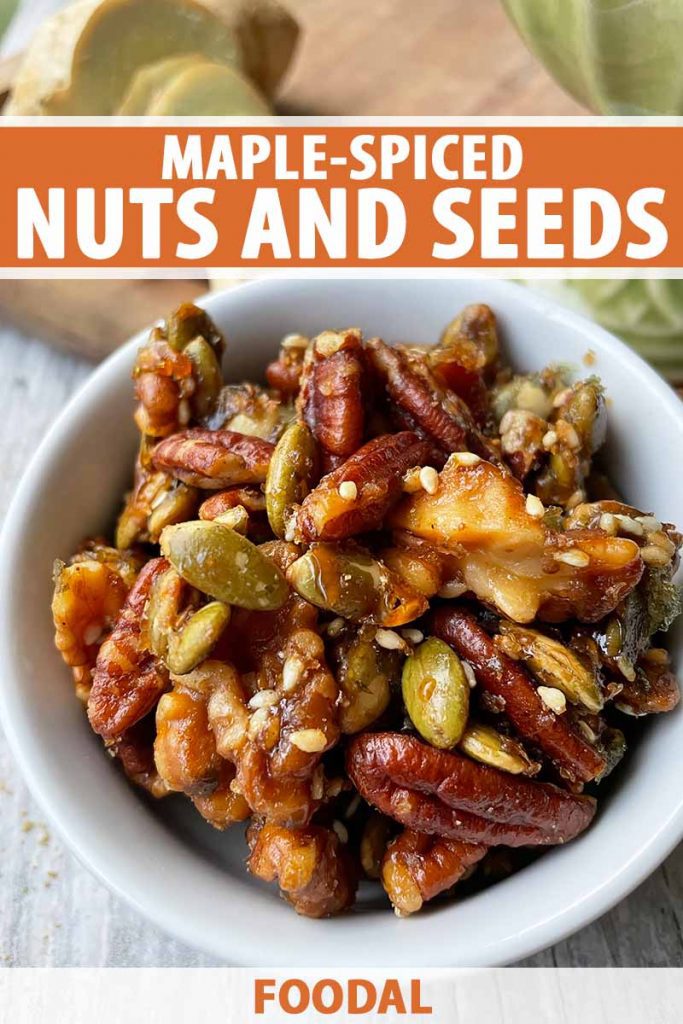 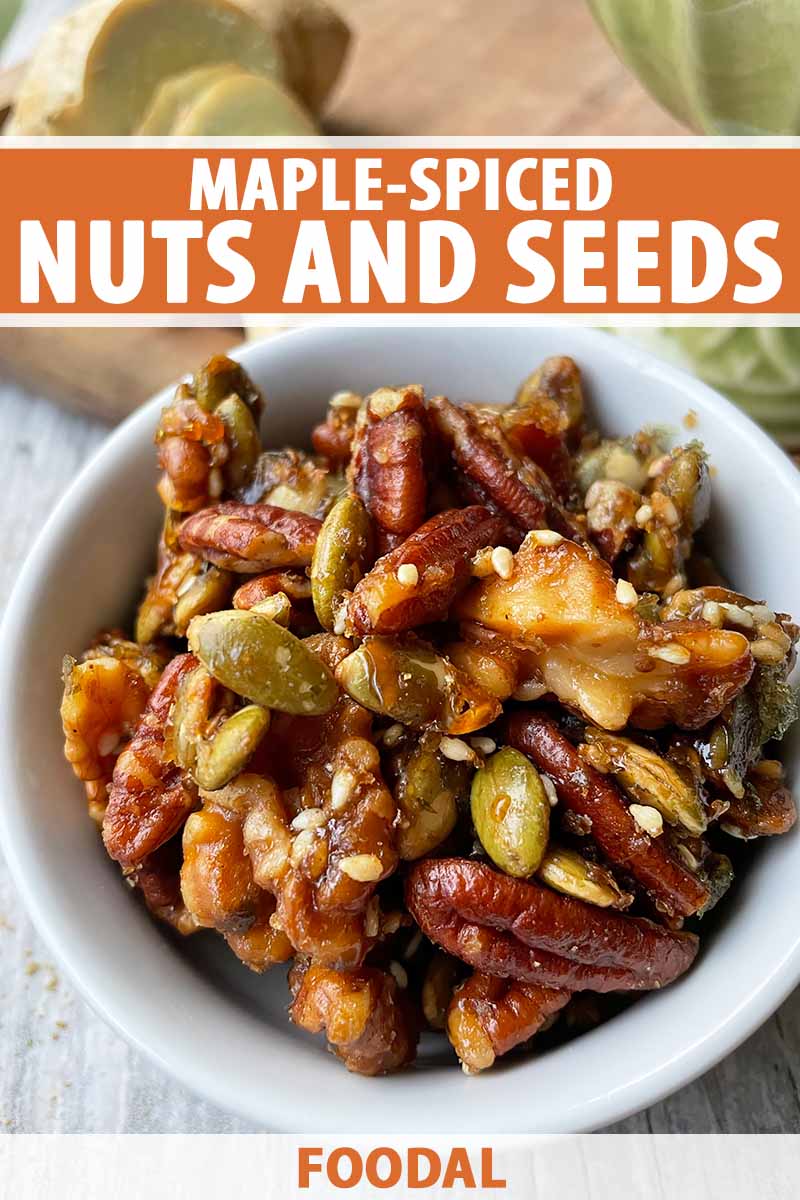 But unfortunately, that delightfully delicious memory happens to be coupled with a disastrous bout of homesickness at camp.

The expression “happy camper” was extinguished when I attended my first sleepaway adventure at age nine.

I missed my parents and my Persian cats, and I had no interest in constructing a feather headband or receiving an archery certification. However, I had begged my parents to let me join this month-long sailboating, s’mores-making escapade, so my letters home disclosing how the counselors were trying to brainwash me were rather ineffective. 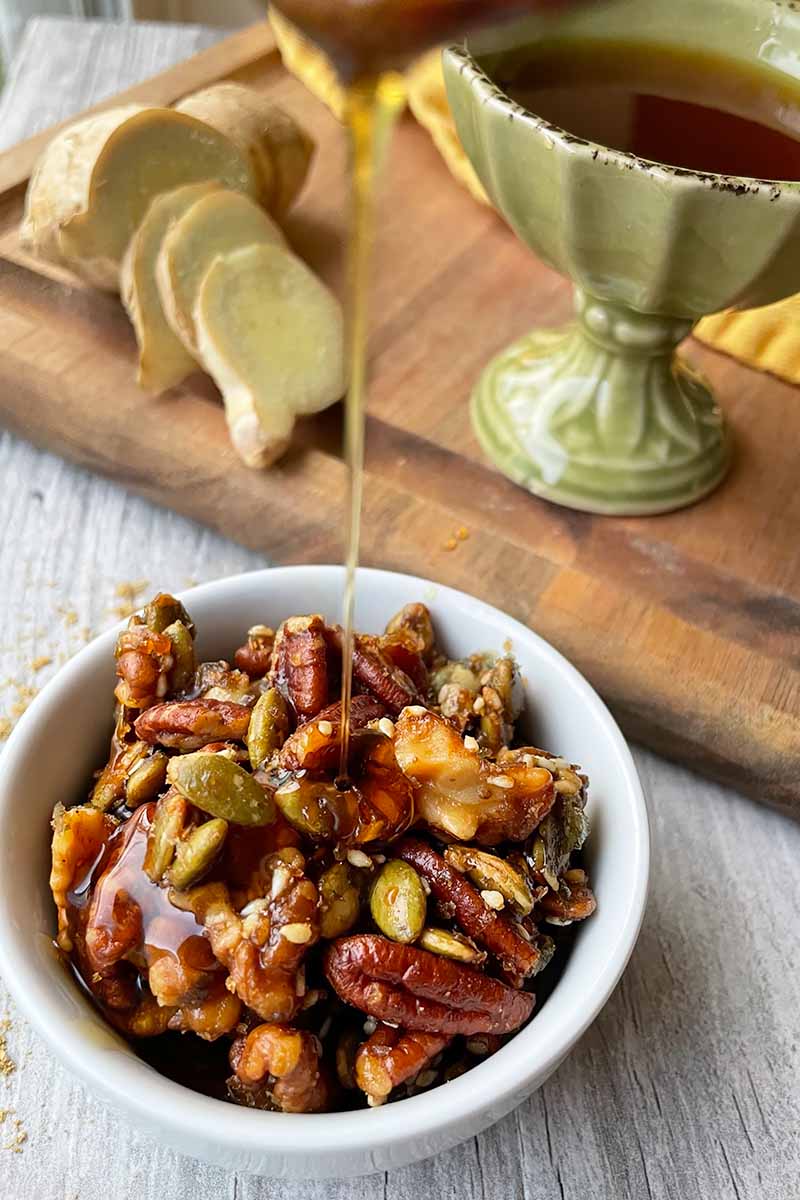 One day, while I was busy gluing glitter onto a stick, a care package arrived in the mail from back home. I assumed it was a clipping of Lieutenant Mango’s fur (he was one of the cats, not a weird uncle or something) or a VCR containing a tape with several pre-recorded episodes of Friends on it.

Instead, what I found inside was a blue and yellow tin of sugary honey-roasted nuts. I popped the lid off the canister and smelled the buttery aroma of salted morsels, toasted and caramelized to perfection. In that moment, I knew that this snack had transformed my summer, and forever stolen my heart.

It was a homemade taste of home. 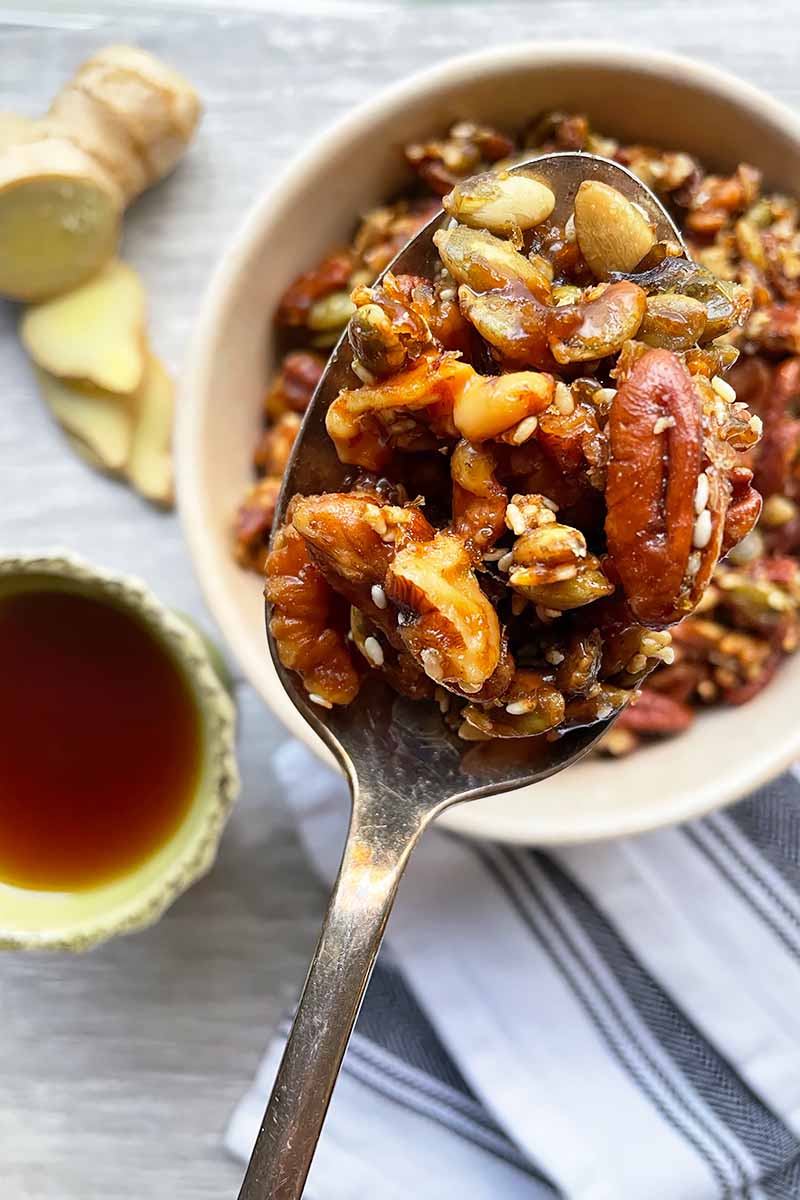 All of that being said (and yes, I’m leaving out the part about the years of therapy that followed), I am nuts about nuts.

Especially when cloaked in a sweetened mixture with a few spices added, there’s something about the crunchy treat that brings a smile to my face. I’ve experimented with dozens of different flavor combinations, but this one undoubtedly tops my list.

Tossing any nut or seed (or shoelace, for that matter) in maple butter is a bomb start to any recipe. Can’t argue with that. I like to kick things up a notch in the kitchen, though, so instead of just adding dried spices, I infuse fresh, juicy ginger into the mix.

Well, into the butter. 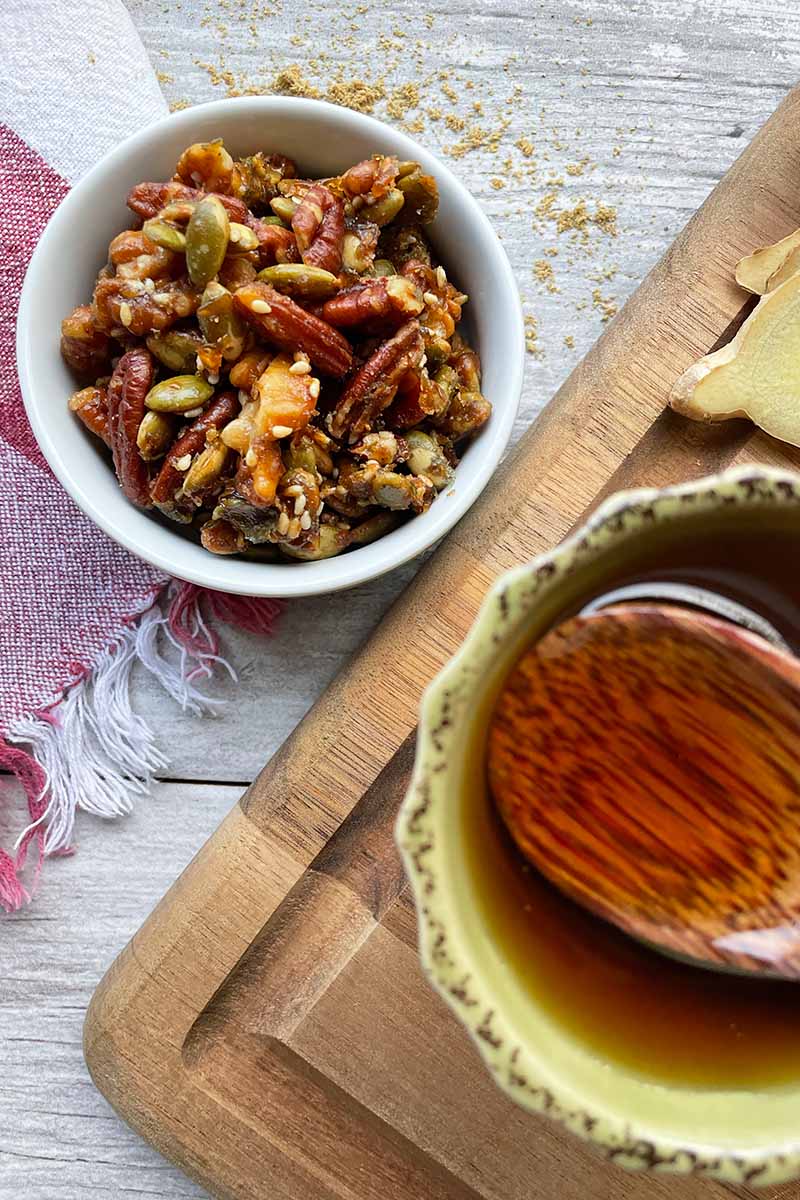 Just as you would smash a garlic clove to release its aroma and flavor, and let it sizzle in a butter or oil bath to add a full-bodied garlicky taste without the bite of actual pieces of garlic, I take the ginger down the same road.

I could have spent hours perusing my spice cabinet trying to decide who should make an appearance, so I kept things simple by reemphasizing ginger as the prominent flavor, and adding some ground coriander.

Ground coriander is slightly sweet and citrusy, so it’s a match made in heaven for rich, smoky maple. 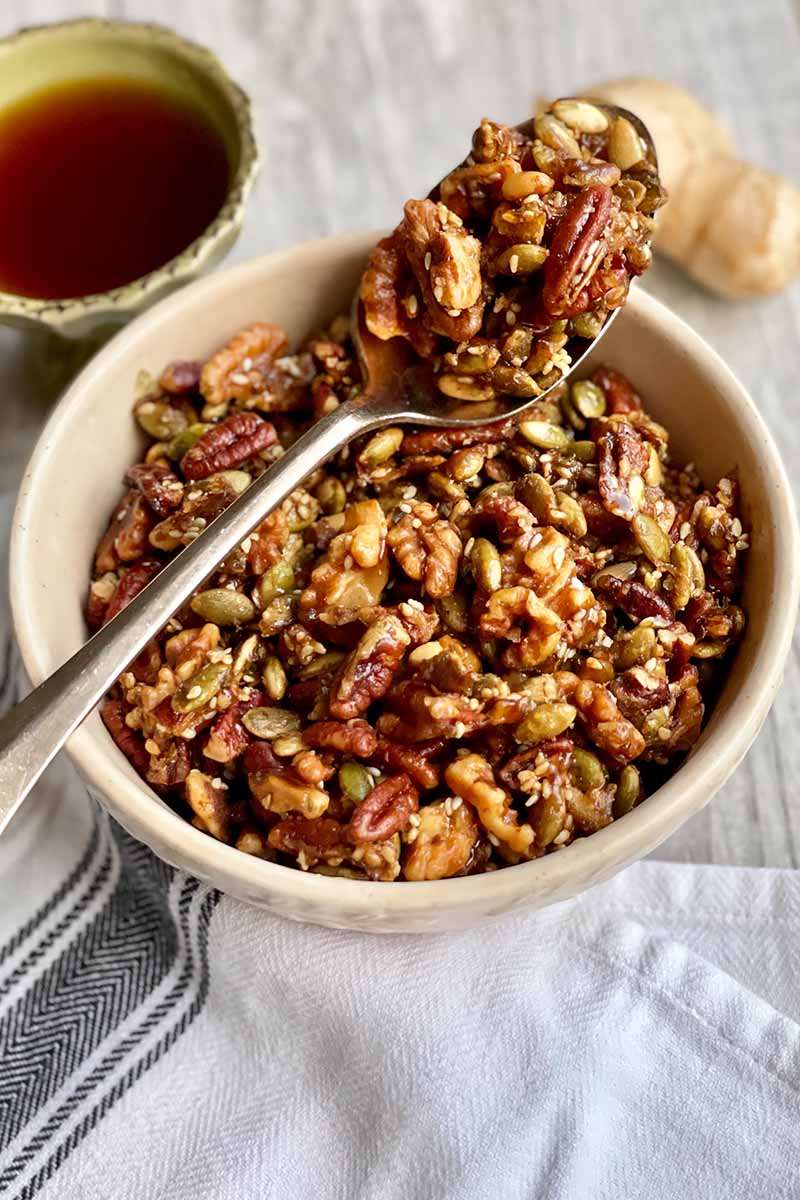 Thanks to a lower oven temperature and slower cooking time used to make this recipe, the spices really take their time soaking into the individual pieces – making for a snack so addictive, I promise you’ll want to double the recipe for a bigger batch, or add them to your weekly snack pack prep.

If I traveled back in time to camp with this recipe, I probably still wouldn’t get a stamp in my Land and Sea Manual, but I certainly would have the power to boost the overall morale of my bunkmates.

This sweet and savory snack showcases a medley of nuts and seeds tossed and toasted with sweet maple syrup, butter, and fragrant ginger.

Preheat the oven to 250°F and line a baking sheet with parchment paper. 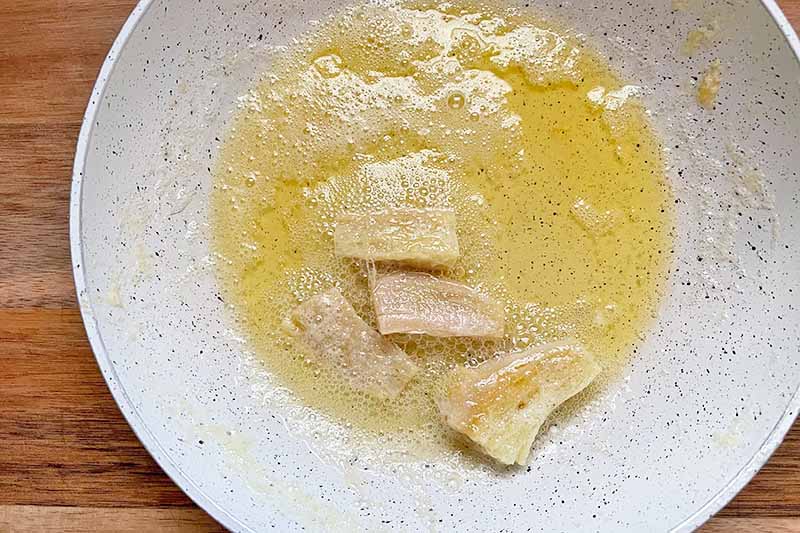 Using a paring knife or a spoon, peel the skin from the ginger. Use the flat side of a large chef’s knife to gently smash it, coaxing it to release its tantalizing aroma and activating its flavor compounds.

Add the butter and fresh ginger to a small skillet or saucepan, and place it over low heat.

Simmer until the ginger becomes lightly golden and very fragrant, for about 2 to 3 minutes, and then turn off the heat. It’s okay if the butter gets a little toasted and light golden brown. 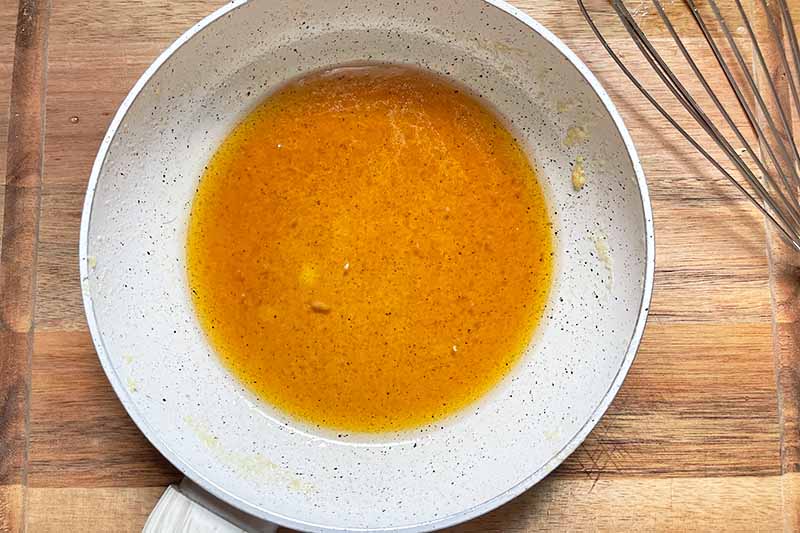 Remove the ginger. Whisk in the maple syrup.

You can rinse the butter off and steep the ginger in hot water to make tea if you like, or mince it and use it in a marinade or dressing rather than tossing it.

Step 2 – Mix the Dry Ingredients and Toss with Flavorings

In a small bowl, stir together 1/2 teaspoon of the salt, the ground ginger, and the ground coriander. 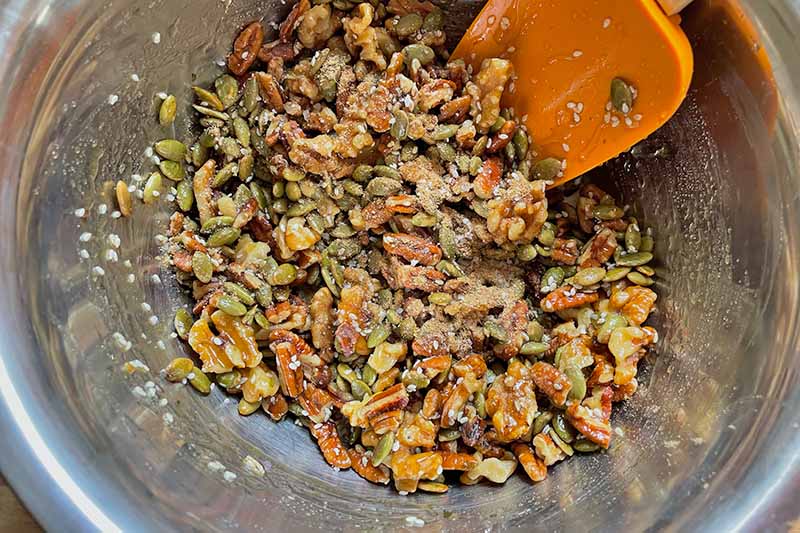 Fresh ginger, though astringent and spicy, only infuses the butter in a subtle way. I use the dried spice as well since its flavor is more concentrated, and the powder spreads more evenly throughout the individual pieces.

Add the pecans, walnuts, pistachios, pumpkin seeds, and sesame seeds to a large bowl. Pour in the maple-ginger butter and ginger-coriander spice mixture, and toss until everything is thoroughly coated.

Arrange the mixture in a single layer on the prepared baking sheet.

Bake, tossing every 20 minutes until everything is lightly golden and toasted, but not too deep brown. This will take about 45 minutes to 1 hour. Be sure to keep an eye on them! 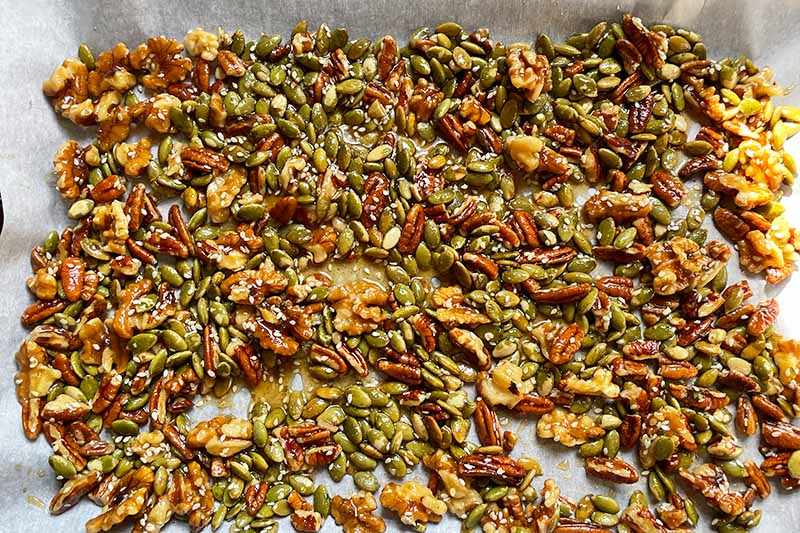 The pieces around the edges of the pan will toast faster than those in the middle, which is why it’s important to make sure everything is distributed evenly and tossed occasionally during the cooking process.

Remove the pan from the oven. While the mixture is still warm, sprinkle it with the remaining 1/2 teaspoon salt. 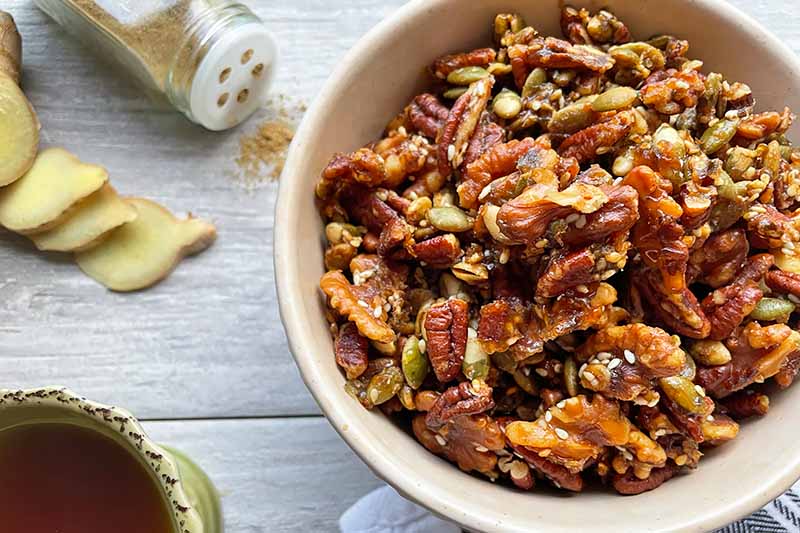 Allow the mixture to cool completely on the pan, and then store at room temperature in an airtight container for up to 3 weeks.

If adding sesame seeds feels like a plot twist, just trust me here. The tiny specks cling to the larger pieces, adding a touch more texture and a bit of whimsy to the final result.

To dot the nuts with a darker color, try poppy or chia seeds instead, or combine black and white sesame seeds for a little variety. 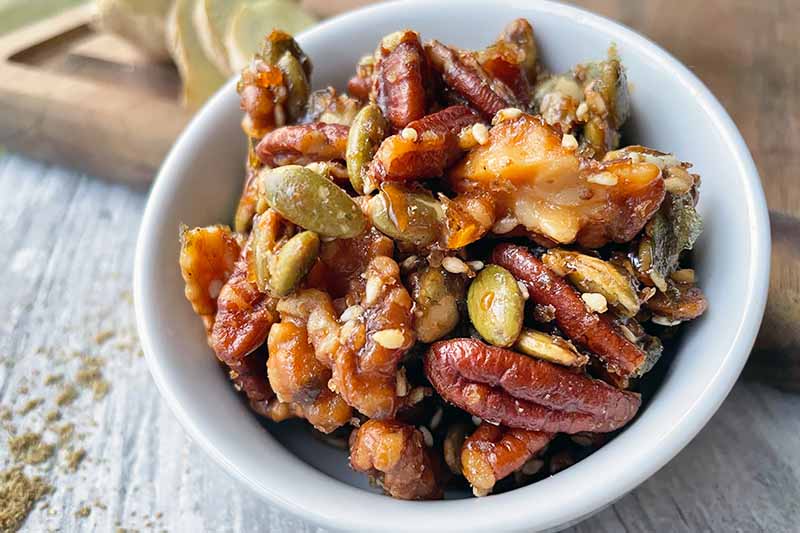 Just because I used butter doesn’t mean I’m coming to bang down your door if you don’t. Though the butter adds even more nuttiness, you can substitute coconut oil, egg whites, or even plain vegetable oil. The maple and spices just need a fatty substance to adhere to.

Using your eyes is key for testing doneness, but your nose knows too. Your nostrils will perk up just as the nuts are about to cross the bridge from golden brown to burnt, so pay close attention towards the end of baking.

Still hungry? Go crazy with these other nut-based recipes next:

What will you do to make this recipe your own? Some of my favorite twists are to sprinkle in cinnamon, nutmeg, and cloves for a classic taste of fall, or I’ll add some cashews and sunflower seeds to bulk up the mix.

Share your crunchy concoctions in the comments below! And don’t forget to give this recipe a five-star rating if you loved it. 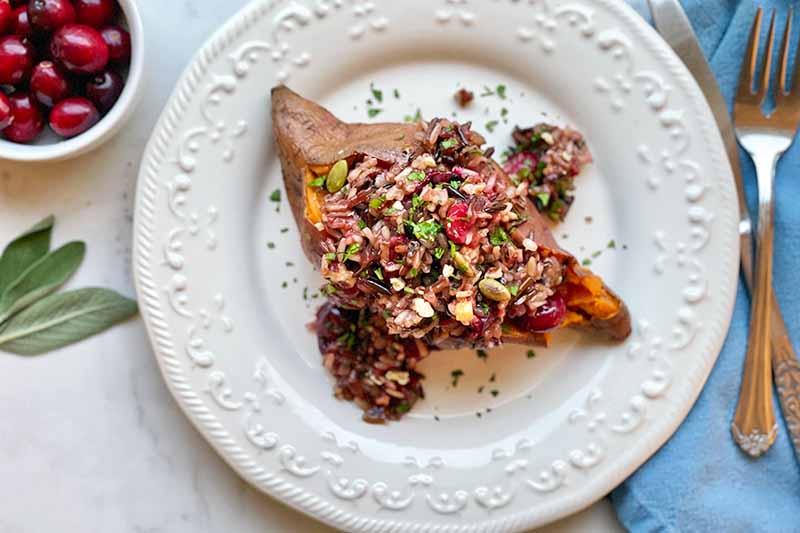 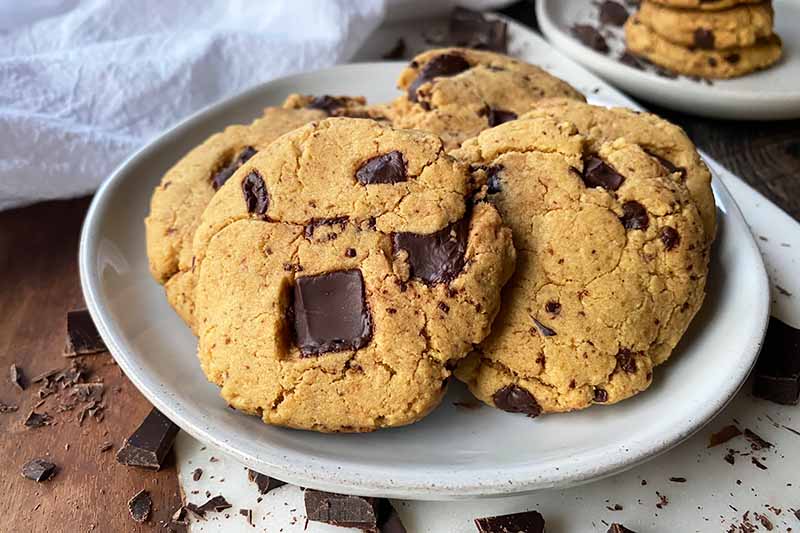 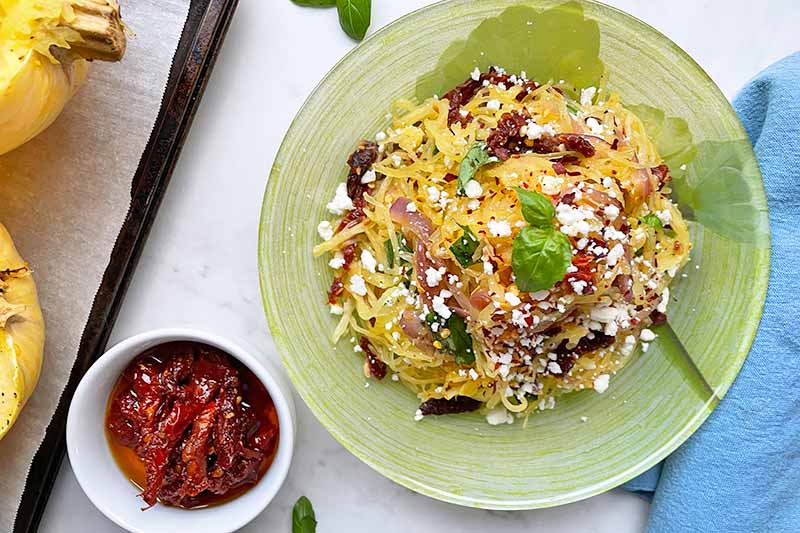