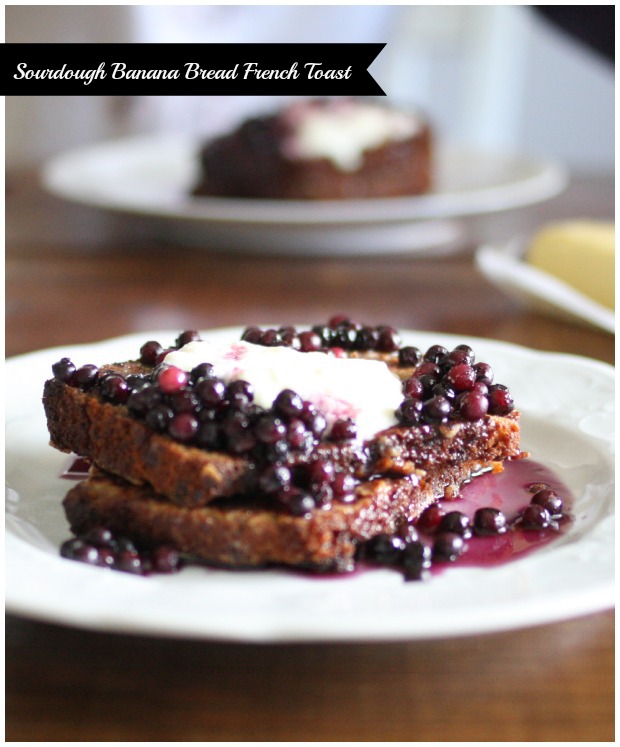 There’s something about a weekend morning that demands a special breakfast. After waking up to sunshine, lazing around in bed, whiling away hours reading and talking and staring out your windows at the brightening sky, when at last you stretch your legs onto the wood floors, the only sensible thing to do is continue the indulgence by feeding whatever your morning craving may be: Pancakes? Quiche? Cinnamon rolls? Fresh-squeezed juice? Banana bread French toast?

Tim and I took advantage of this pure luxury last Saturday, on one of those rare wide-open days where we had no plans or obligations until dinnertime and thus full freedom to pursue anything we chose. I’d made sourdough banana bread the night before, so in the middle of the afternoon in our pajamas, we dipped slices in a French toast batter and sauteed them in coconut oil on the stove. Tim reduced blueberries and maple syrup in a separate pot; then, we took our plates to the table, spooning thick blueberries onto fat slices of the sweetest, most delicious breakfast I’ve had this year. 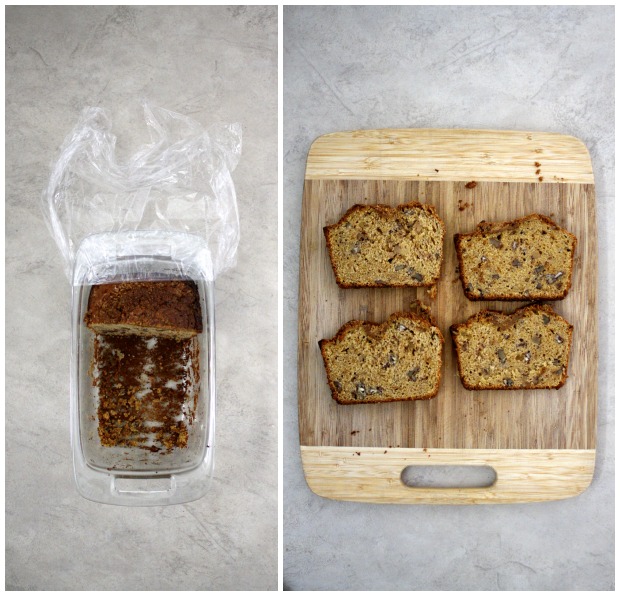 We were, in other words, engaging in what some would call a ritual, a practice of slowing down enough to pay attention to what you see, the kind of thing we’ve talked about with you here before, both in terms of why we photograph food and why we find it important to face each other at a table and, talk.

“The power of ritual is profound and under-appreciated,” says Peter Bregman of the Harvard Business Review, in an article he wrote at the end of 2010, just before I’d moved to Nashville and four months before Tim and I, now the breakfast companions sharing banana bread French toast, would be engaged. “Mostly, I think, it’s because we live in a time-starved culture, and ritual is time-indulgent. Who can afford the luxury of doing one thing at a time? Who has the patience to pause and honor an activity before and after we do it? 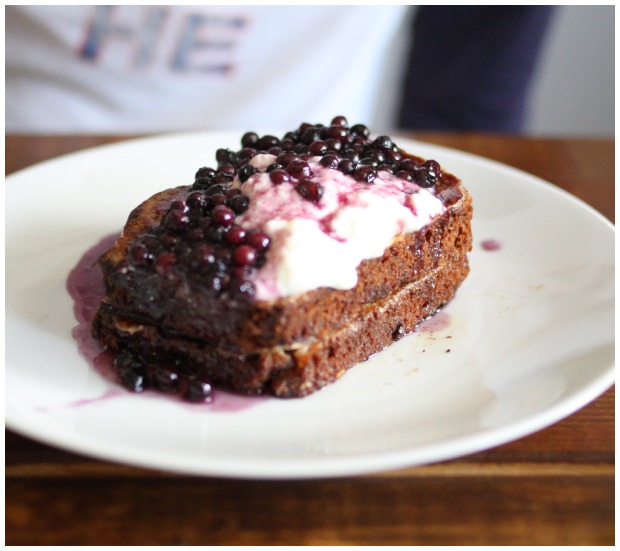 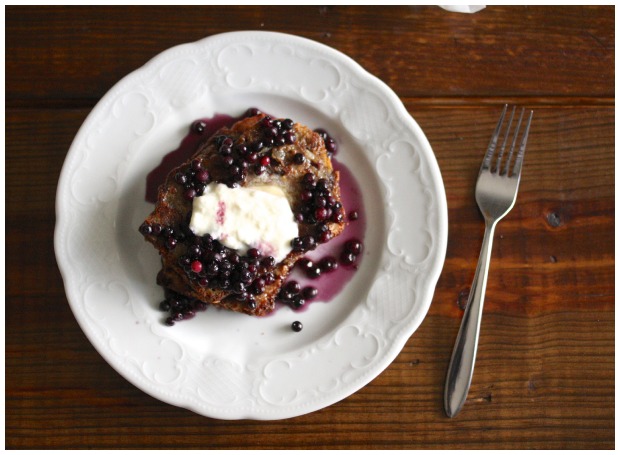 I read Bregman’s article earlier this week, but I’m still thinking about the conclusion he comes to later in the piece—that, while extravagant weekend mornings are the stuff beautiful rituals are made of, there are smaller, no less meaningful rituals we can engage in every day. Deep breaths at your computer each morning before you work, for example, could be a choice to calm your thoughts and focus on your surroundings. Pausing to consider a response before you make it, perhaps, helps you practice what it means to listen and be slow to speak.

The idea of ritual is nothing new, but it’s something I want more of in my life—more noticing, more appreciating, more slowing down—whether that comes in the form of the first college football game all season (as my friend Holly reminded me of the value of last week), in reading a book before bed with my iPhone tucked away in another room or in the form of weekend family breakfasts like this one, eaten in quiet and savored slow.

To gild the lily, we topped our French toast with pats of butter, dollops of yogurt and spoonfuls of blueberry sauce. We’re a fun of over-the-top breakfasts, just like Foodal’s stuffed French toast recipe with a strawberry mascarpone cheese filling.  Here’s how we made the sauce: in a saucepan on the stove, we combined one part blueberries to one part maple syrup (about 1/2 cup of each, we think), letting it reduce while we made the French toast.

Ingredients:
1 to 2 teaspoons coconut oil
4 slices sourdough banana nut bread (*recipe below; or use whatever banana bread you like)
filling ingredients:
2 eggs
1/4 cup raw goat’s milk (or whatever milk you prefer)
1 teaspoon vanilla
1/2 teaspoon cinnamon
Dashes of nutmeg and cardamom

Directions:
Heat coconut oil in large skillet. In a small bowl, whisk together French toast filling ingredients and pour into a lipped plate. Dip bread, one slice at a time, in the mixture, covering both sides. Cook bread in oil until golden; flip and cook the other side. Repeat with all four slices. Top as you like.

Beyond the sourdough starter and the streusel topping, this recipe is little more than a basic banana nut bread—in everything but one point: Even with no cinnamon in the recipe, while this bread bakes and its intoxicating scent explodes in your kitchen, you’d swear it’s cinnamon rolls, not banana bread, you’re about to eat.

Directions:
Preheat oven to 350F and grease a loaf pan. Cream together the coconut oil and coconut sugar; add egg, and mix until blended. Stir in mashed bananas and sourdough starter. Add vanilla extract. In a separate bowl, sift the flour with salt, baking powder and baking soda. Add this flour mixture and the chopped walnuts to the first mixture, stirring just until blended. Pour into loaf pan. In a small bowl, put together streusel ingredients: cut butter into the flour and sugar. After this mixture resembles coarse crumbs, scatter it all over the top of the banana bread mixture in the pan. Insert pan in the oven and bake for 1 hour or until toothpick inserted in the center comes out clean. Cool before slicing. 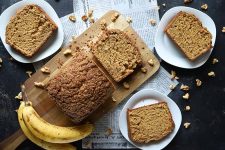 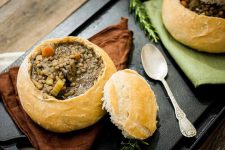 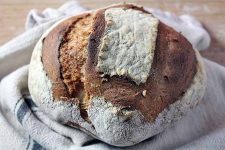 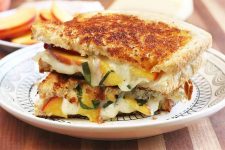 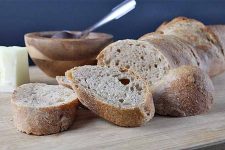 Bake Your Own Baguettes at Home 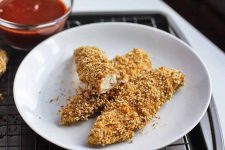 Healthier Homemade Chicken Fingers That the Whole Family Will Love 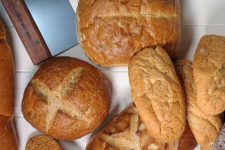 The Top 11 Tools for Baking Bread 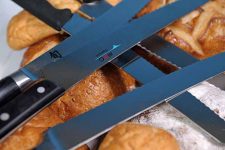 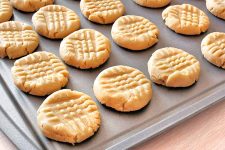 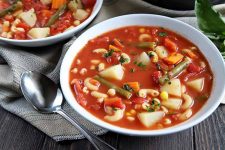 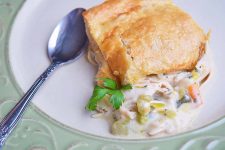 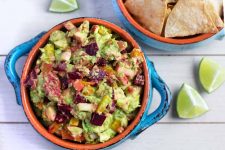 Rainbow Guacamole with Beets and Apples