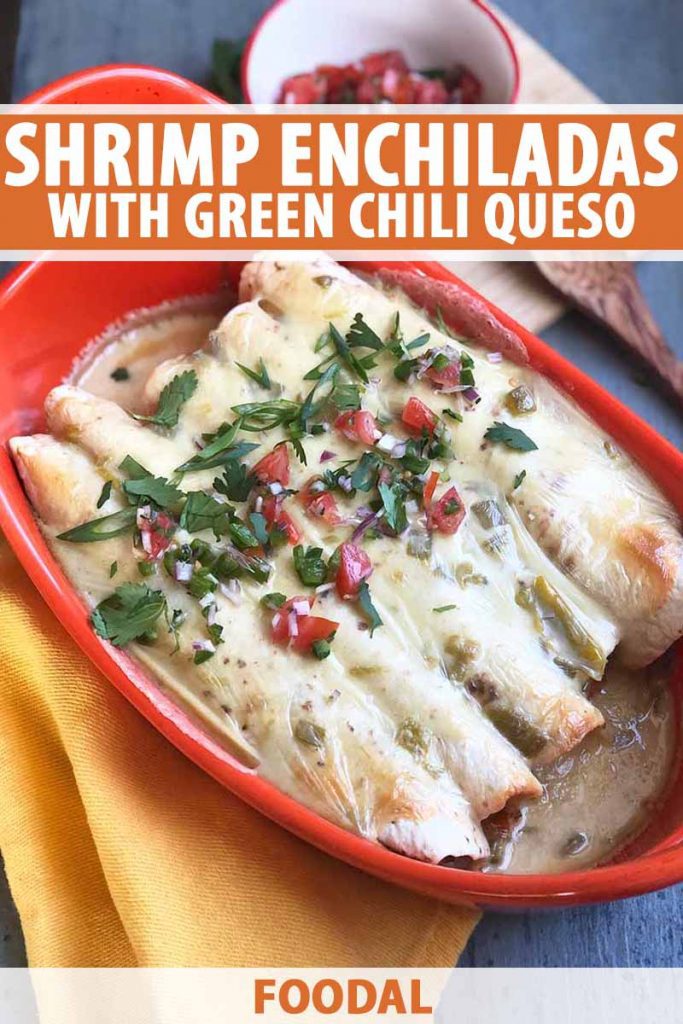 If Tuesday is meant for enjoying tacos, can every other day be dedicated to enchiladas? 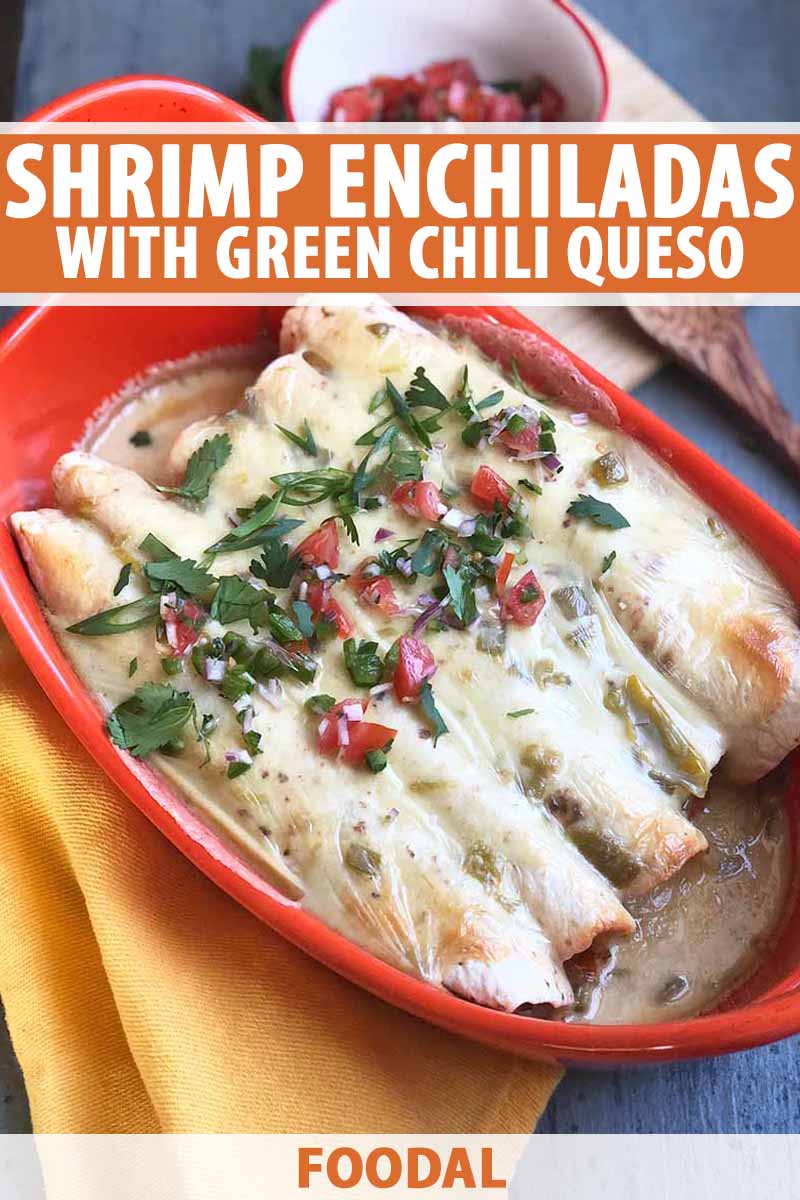 Mexican food of the Americanized variety is one of the categories of cuisine I could eat almost every day if I had the chance. In all honesty, my regular rotation of homemade eats consists of a combination of all things cheesy and crunchy, and I am not sorry.

From mozzarella-layered wood-fired pizza to French onion soup with crusty bread to some form of Tex-Mex food floating under a sea of queso, I know what I like, and I proudly stick to it. Up until recently though, I was always more of a taco or quesadilla girl.

Quesadilla Girl is also the name of my alter ego, in case you were wondering. And she often prefers to eat like a toddler, I’ll admit it.

Case in point, I like food that I can hold in my hands. And there’s something about that moment when it drips from in between my fingers down to my elbows that is incredibly satisfying, especially when I’ve taken the time to make it from scratch.

Somehow, dropping a splotch of salsa from my local Mexican spot onto one of my couch cushions is far less enjoyable than watching a buttery bite of the cheesy quesadilla or Buffalo chicken taco that I lovingly prepared slide from its crisp, crusty shell onto my lap. 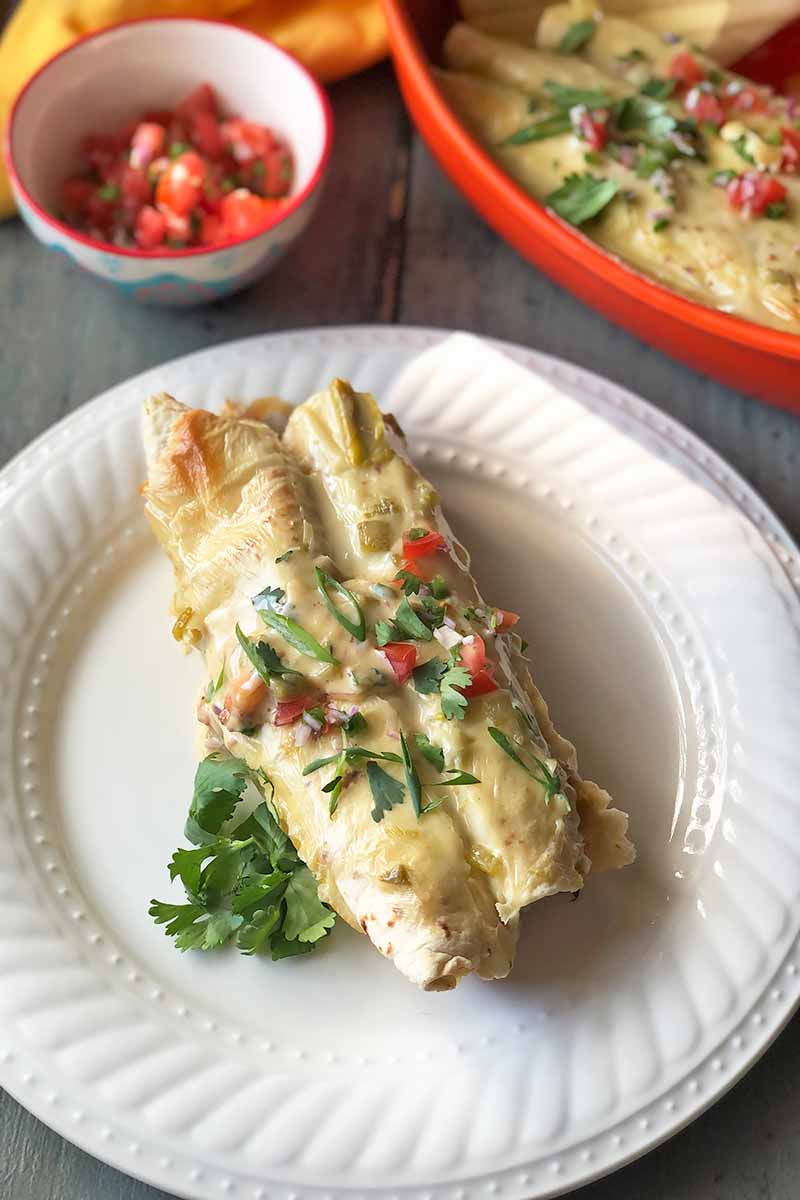 Over the past several months, I’ve found myself accidentally over-buying tortillas. Due to some combination of never wanting to run out and always forgetting where I put them in the fridge, this is one item that seems to always end up in my basket when I make a trip to the grocery store, one way or another.

You can never have too many tortillas. I think Robert Frost said that.

The last time I found myself with an abundance of these floury rounds, rather than relying on my usual go-to’s, I realized that the best way to make use of them was to turn my accidental excess into an outstanding enchilada experience.

I do appreciate the never-ending supply of chips and salsa that comes with dining in at a Mexican eatery, but I often find that the main dishes are under-seasoned at my local establishment. And especially when it comes to enchiladas, I hate to be underwhelmed.

That’s why I’ve taken these rolled-and-baked beauties into my own hands. Well, besides cooking a big casserole to deal with the overwhelming abundance of tortillas in my fridge, that’s why. 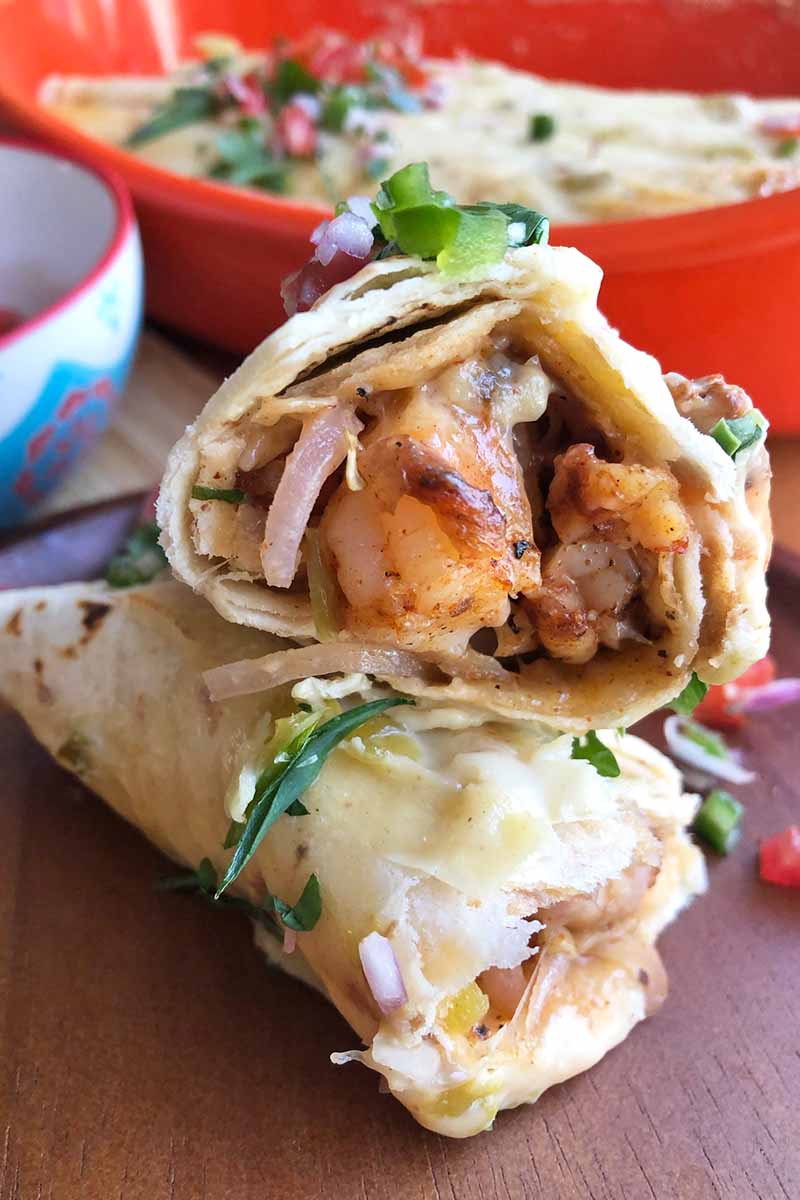 Actually, you really shouldn’t eat enchiladas with your hands… Even if you’re a professional mess-maker like me. But I digress!

The shrimp is the star of this recipe, so instead of doing these juicy little morsels a disservice by carelessly forgoing the hearty amount of flavor that they deserve, I generously coat them in a Mexican-inspired blend of earthy cumin, chili powder, and smoky paprika.

Once cooked and chopped, I enhance them with even more aromatics by adding sweet onions and pungent garlic.

And now, on to one of my all-time favorite topics: queso.

I’ve tried mimicking a classic white Tex-Mex queso at home every which way. What does that mean? Well, to start, I’ve eaten dozens of bowls of liquid cheese for the sole purpose of delivering this research to you. 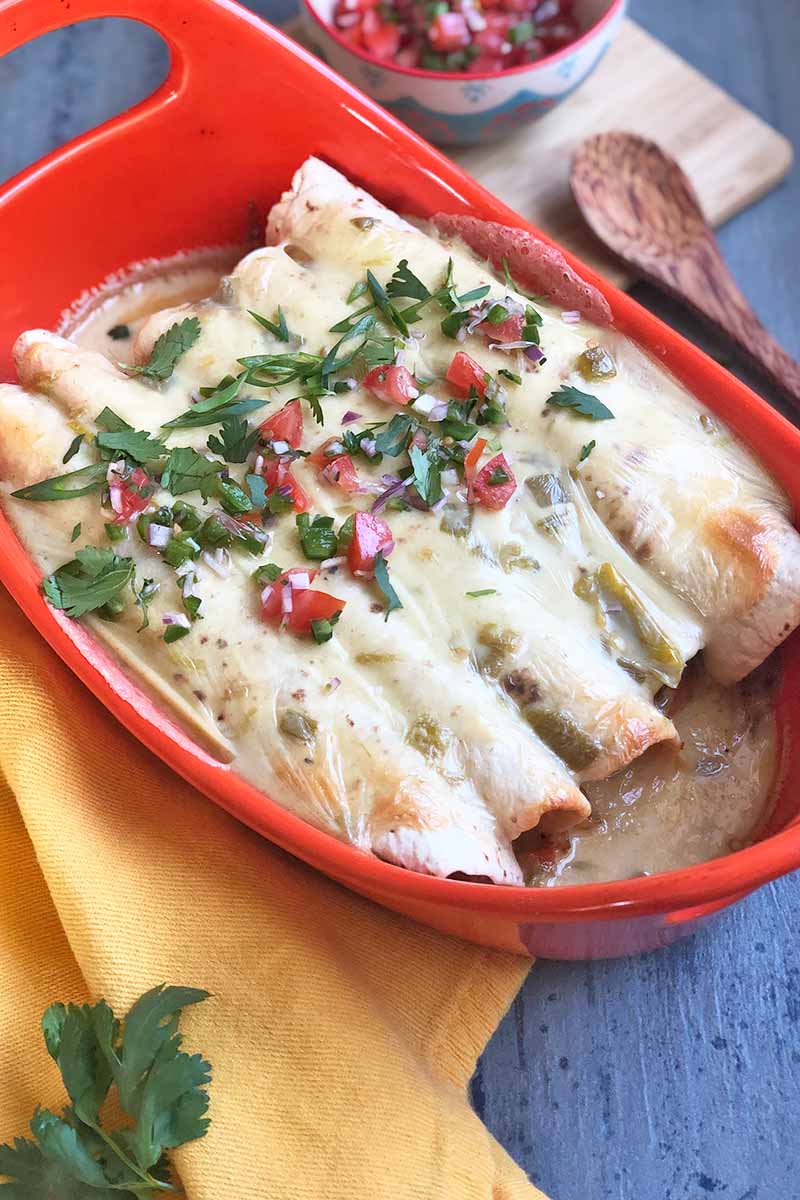 During my queso voyage, I discovered that simplicity is key. When it comes to a copycat version of the classic restaurant “cheese dip,” there are three basic ingredients you just can’t do without: good-quality white American cheese, milk, and canned green chilies.

Though I spruce mine up every now and then with another mild melting cheese and a pinch of extra spice, as is the case with the recipe you see here, those three basic stepping stones will lead you down the path you’ve been seeking, every single time.

Scallions and cilantro make deliciously fresh, grassy garnishes, and limey pico de gallo (or any other bright, acidic salsa) is the kicker that I prefer to serve alongside these, for cutting through the richness.

I may be Quesadilla Girl, but that doesn’t mean I can’t moonlight as Enchilada Woman on occasion.

Give Mexican night a magic touch with these shrimp enchiladas. They’re swimming with smoky spices and cloaked in a savory cheese sauce.

Preheat the oven to 350° F and lightly spray the bottom of a large baking or casserole dish with nonstick spray. I used a roughly 9-by-13-inch ceramic baking dish. 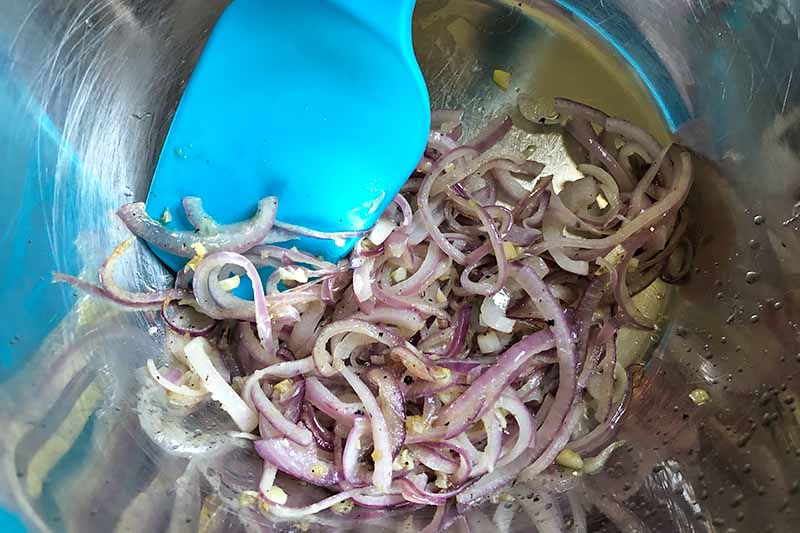 Thinly slice the onion and mince the garlic. You can also chop the onion, but I prefer the texture of the long, thin strands.

Melt the butter in a large skillet over medium heat. Add the onion and saute until it is translucent, about 3-5 minutes. Add the garlic and a pinch of salt, and cook for 1 more minute. Transfer the onions and garlic to a large bowl and set aside.

In the same skillet, add the olive oil and swirl to coat the pan. Season the shrimp with the salt, pepper, chili powder, paprika, and 1/2 teaspoon of the cumin. Add the shrimp to the pan and cook until they have a light golden-brown crust, about 1-2 minutes per side, depending on their size. 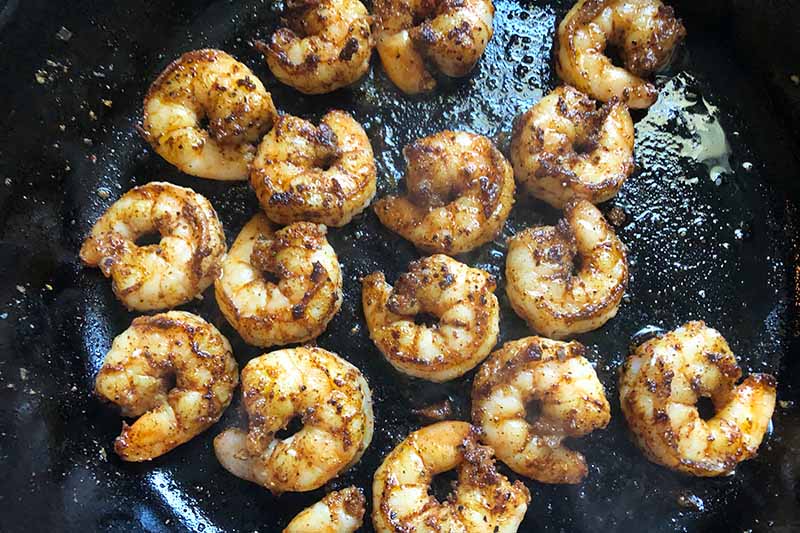 If you’re using very large shrimp and they seem slightly undercooked, they’ll finish cooking through in the oven. 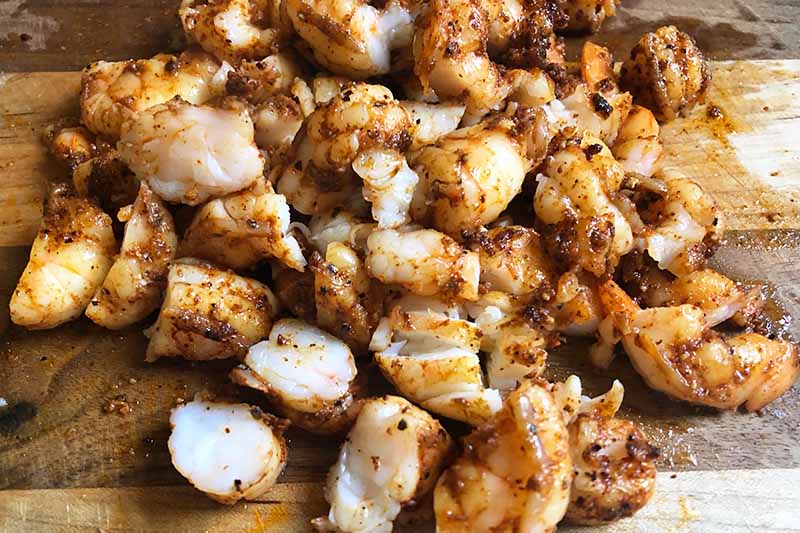 Transfer the shrimp to a cutting board, allow them to cool slightly, and then roughly chop them into bite-size pieces.

Add the chopped shrimp, cheddar, and 4 tablespoons of the green chilies to the bowl with the onions and garlic, and stir to combine.

Place a heaping 1/4 cup of the shrimp and cheese mixture in the center of a tortilla, and spread it out a bit towards the edges. 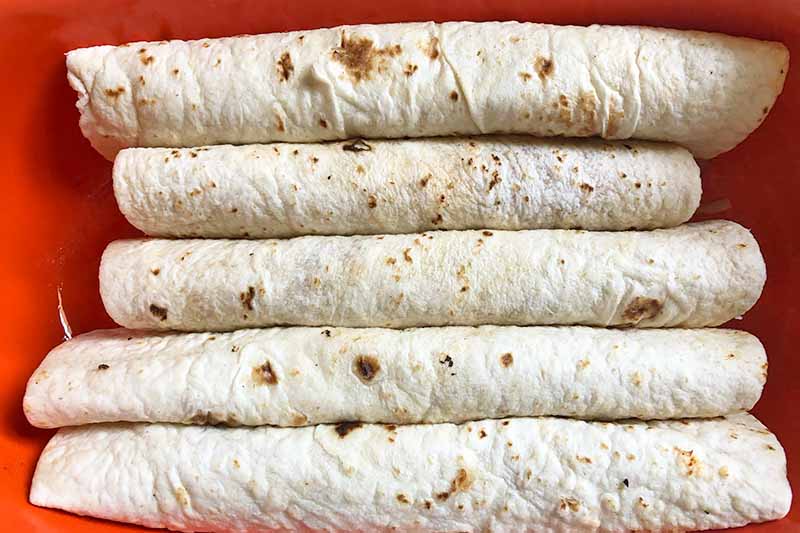 Fold the tortilla over the filling and tightly roll it closed. Transfer it to the baking dish seam-side down, and repeat with the remaining tortillas.

In a medium saucepot over medium-low heat, add the remaining 1/4 teaspoon cumin, 2 tablespoons green chilies, American and Monterey Jack cheeses, milk, and a pinch of salt. Simmer, whisking occasionally, until the cheese sauce comes together, about 5 minutes. 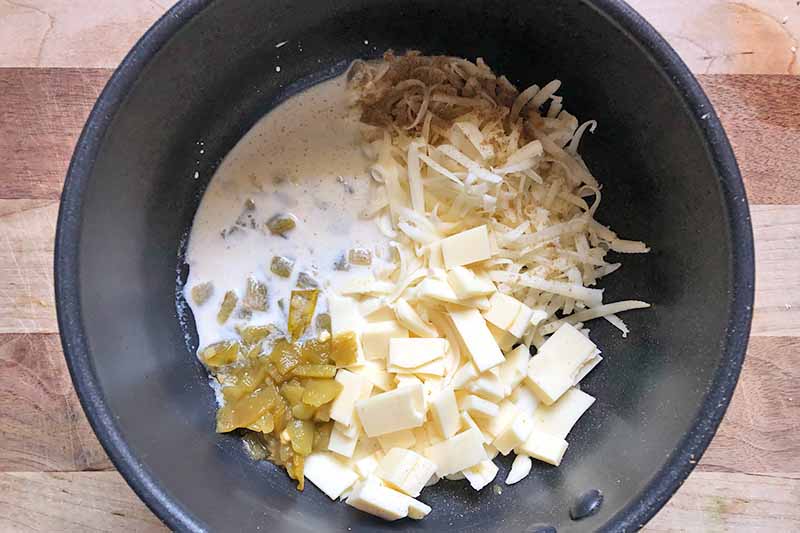 You’ll only need a tablespoon or two of milk to thin the sauce if it’s too thick (which typically happens if it sits off the heat for several minutes, hardens up, and/or gets a solid layer on top).

For thinning the sauce, place the saucepot back on medium-low heat and gradually whisk in about 1 tablespoon of milk at a time, until the queso is smooth and heated through again. 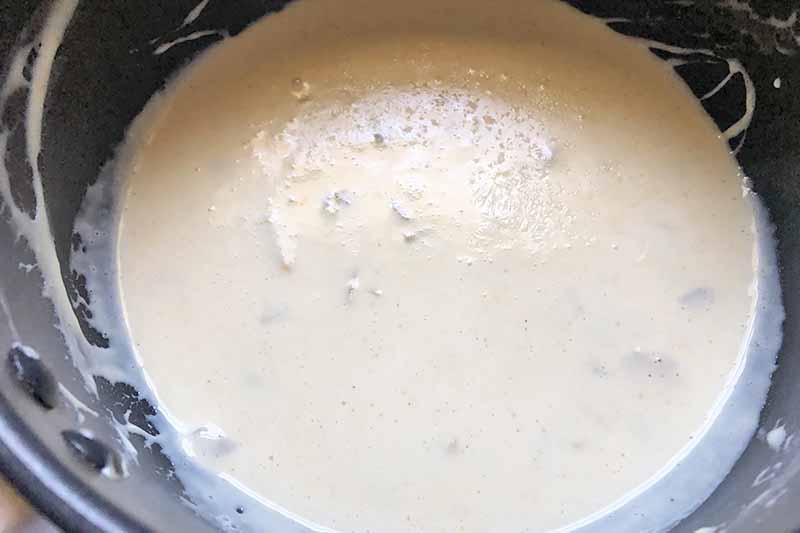 The queso’s final consistency is up to personal preference, but in general, the dip should be liquidy and creamy without being overly thick.

If it coats a chip but slides right off, it’s probably too thin. Add a little more of one or both of the cheeses if your queso ends up too thin. It should stick and have substance without being gloppy.

I recommend making a double batch and serving this as an appetizer with freshly fried tortilla chips.

Chop the cilantro and slice the scallions. 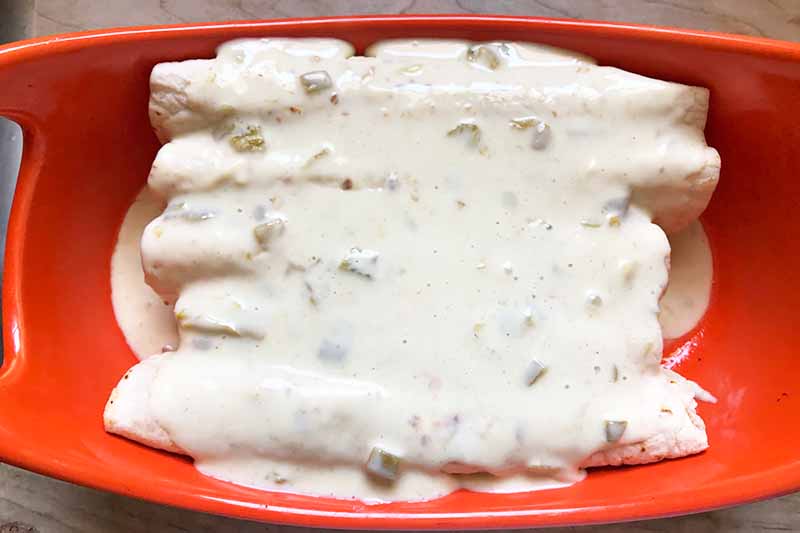 Pour the green chili cheese sauce over the filled tortillas, cover the dish with aluminum foil, and bake until bubbly, about 20 minutes.

Remove the foil and bake the enchiladas uncovered until the tops are lightly golden, about 5 more minutes. 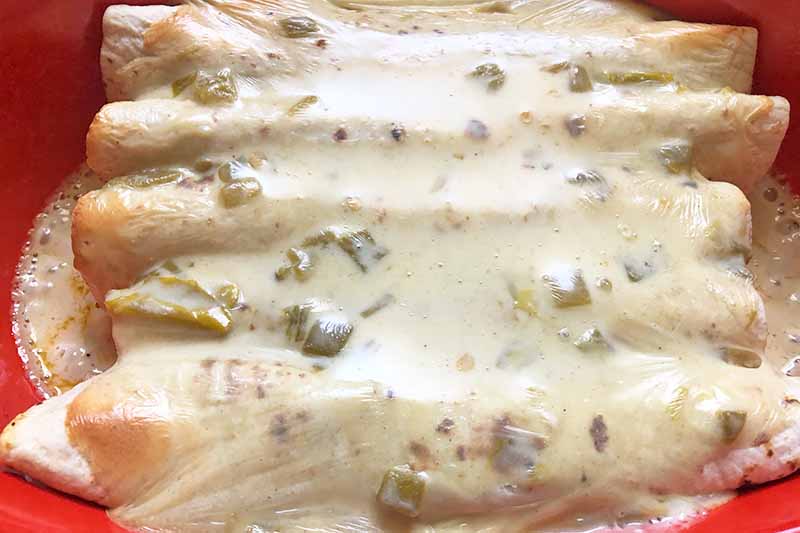 To help separate the tortillas if they’re sticking together, run a sharp knife around two enchiladas at a time so you don’t accidentally tear the tortillas. Portions should easily lift out of the pan this way.

Divide among plates, garnish with the cilantro and scallions, and serve with the pico de gallo or your choice of salsa.

Just Roll with It

Even if you already had quesadillas on Monday and celebrated taco Tuesday after that, that doesn’t mean you can’t dive face-first into these enchiladas for every meal throughout the rest of the week.

The green chilies give the queso a subtly sweet, smoky flavor, but if you prefer food that really lights a fire under your tongue, substitute the Monterey Jack cheese for pepper Jack and toss in a dash of ground cayenne as well.

If you take things in that direction, don’t forget the sour cream for serving. As it turns out, some actually don’t like it hot. (Imagine that!)

Are recipes that require stuffing, rolling, and baking tortillas totally your cup of tea? If so, there’s no doubt you’ll get down with these other enchilada creations:

Creamy and cheesy? Bright and limey? What kind of delicious sauce do you like draped over your enchiladas?

Spill your favorites in the comments below! And don’t forget to give this recipe a five-star rating if you made it and loved it. 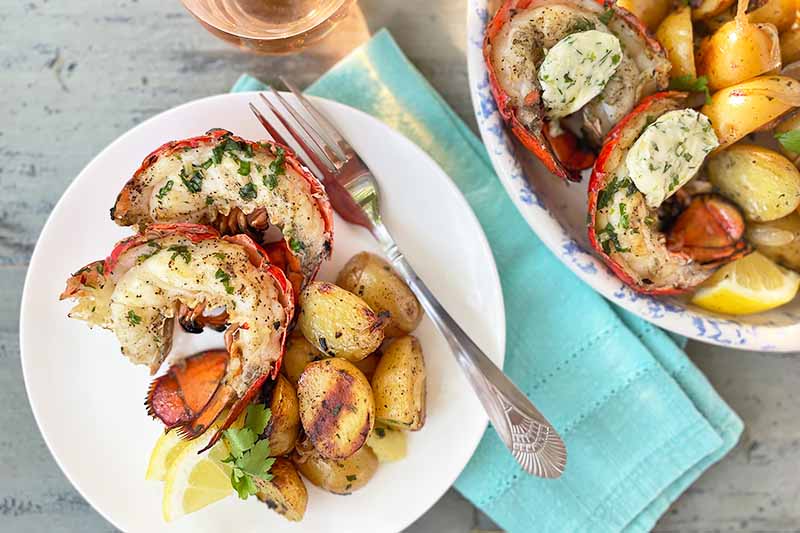 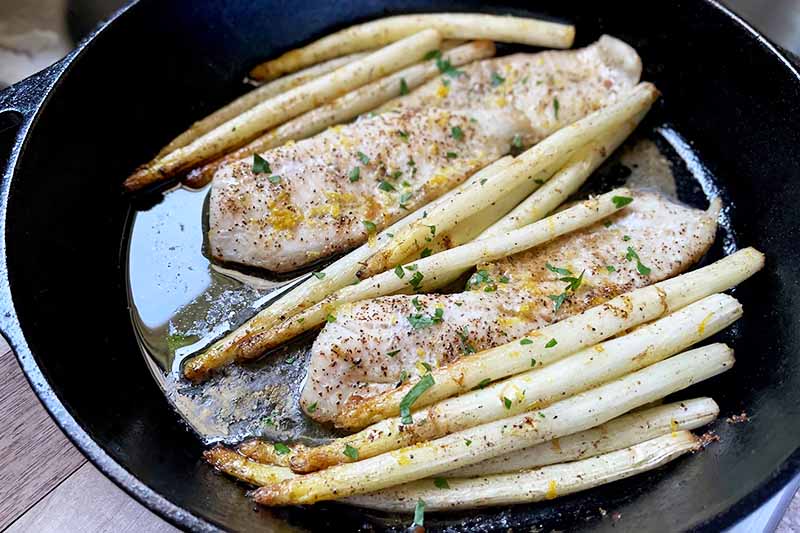 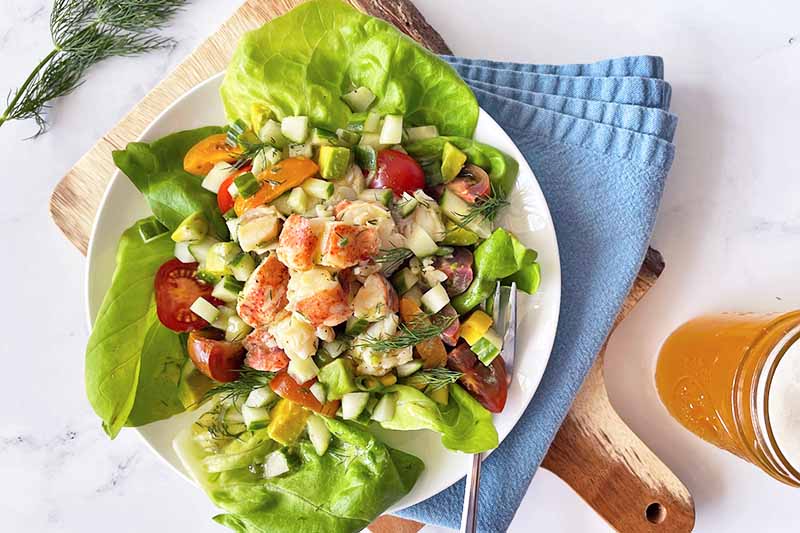