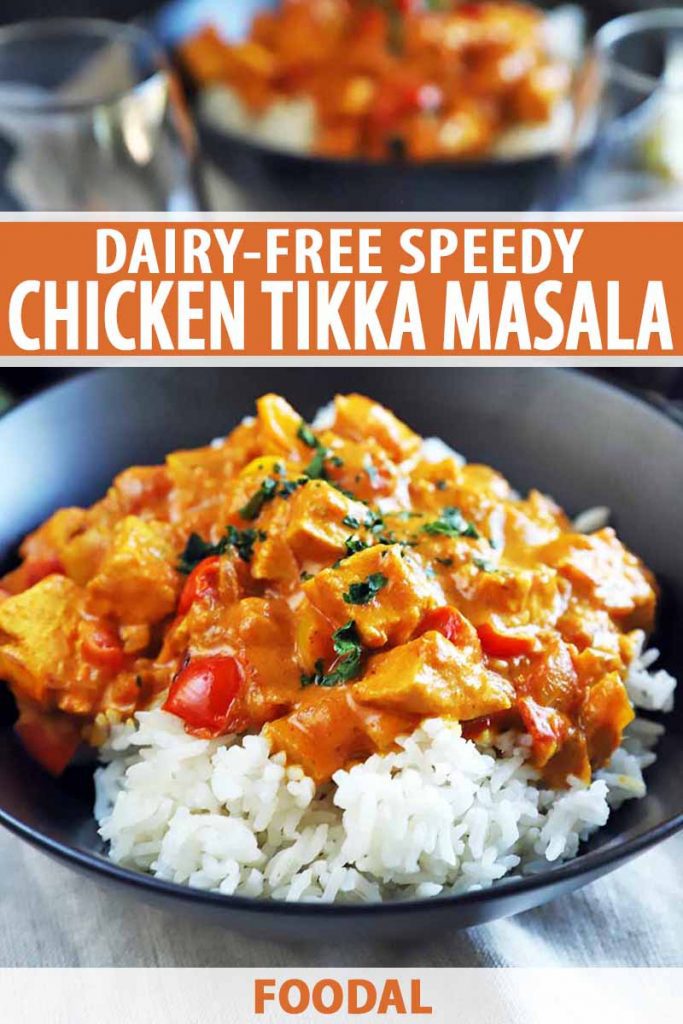 Are you a fan of Indian food?

Or, more to the point, are there certain things that your loved ones excel at that you just don’t get, or that you wish you could achieve with the same level of success, and learn to love as much as they do? 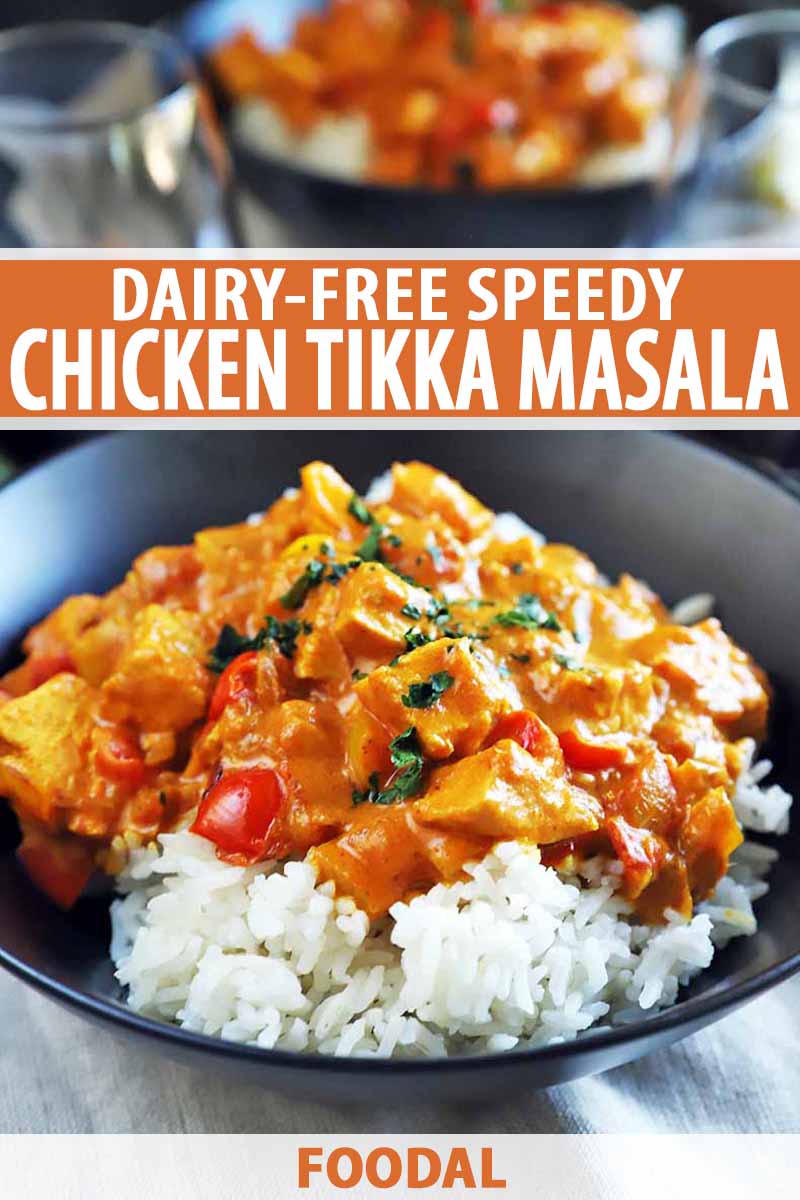 There are many things I envy about my husband, not the least of which is his soft, wavy hair. But his sleeping ability is proving to be one of the great marvels of our married life.

Whereas I need to wind down after a long day of work or a fun social activity or a drama-filled TV marathon, Tim simply climbs into bed, shuts off the light, and he’s out. Gone. Dead to the world.

It’s amazing. We’ve had many long, hilarious conversations about this, wherein I try to prompt him to describe for me what this feels like or how it works (all the while, seeing how long I can keep him awake with me). 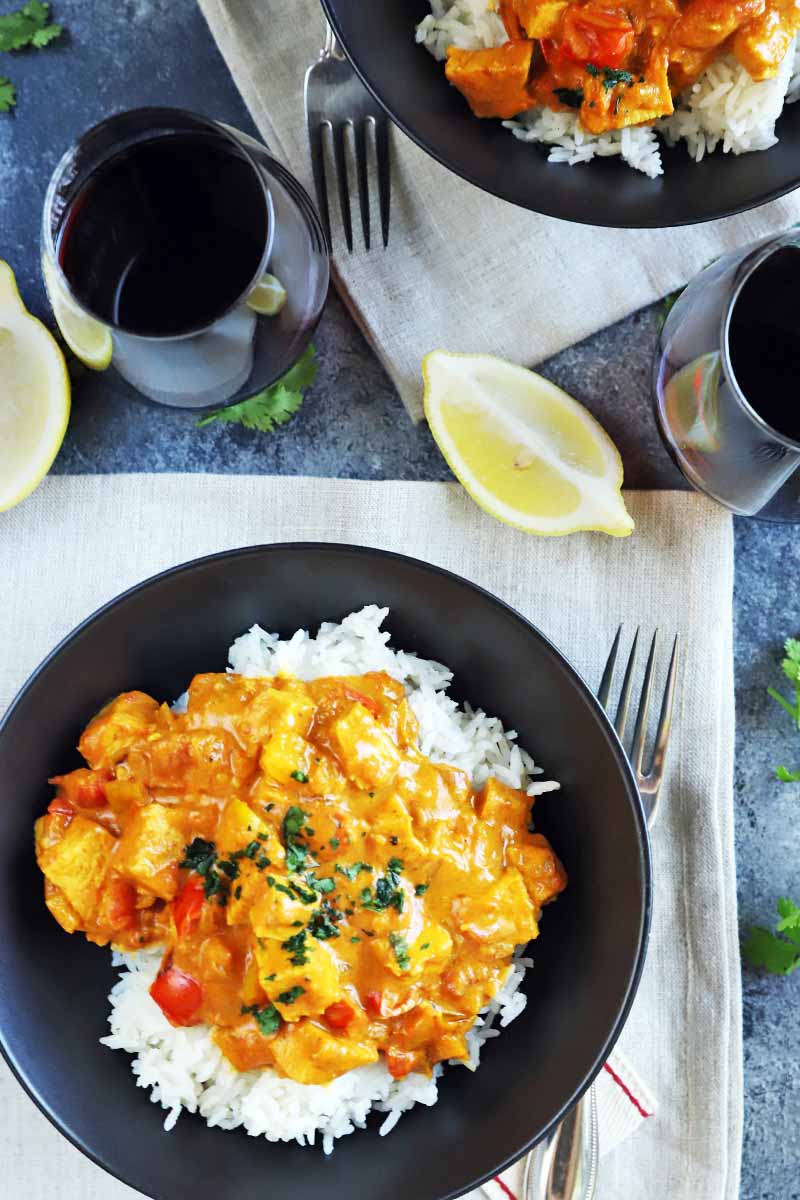 After over thirteen months of marriage, what we’ve essentially concluded is this: sleeping is one area in which he will likely always have the upper hand.

Indian food, on the other hand, is another story. 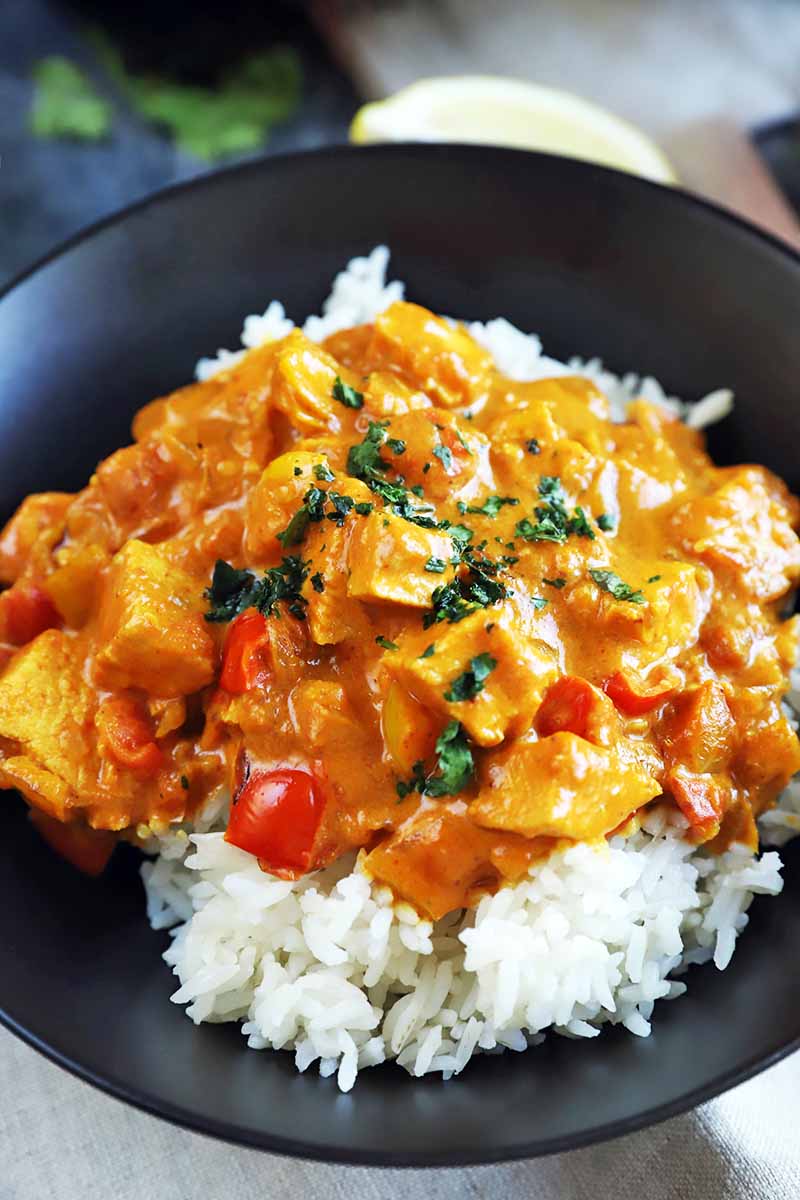 I may be the one who’s half Indian, and perhaps this particular cuisine should have been “mine” from the start. But in our marriage, Tim’s the one who first loved Indian food.

When we were dating, he took me to a restaurant called Sitar downtown, and told me that I should order his favorite dish, chicken makhani (or butter chicken), and garlic naan. 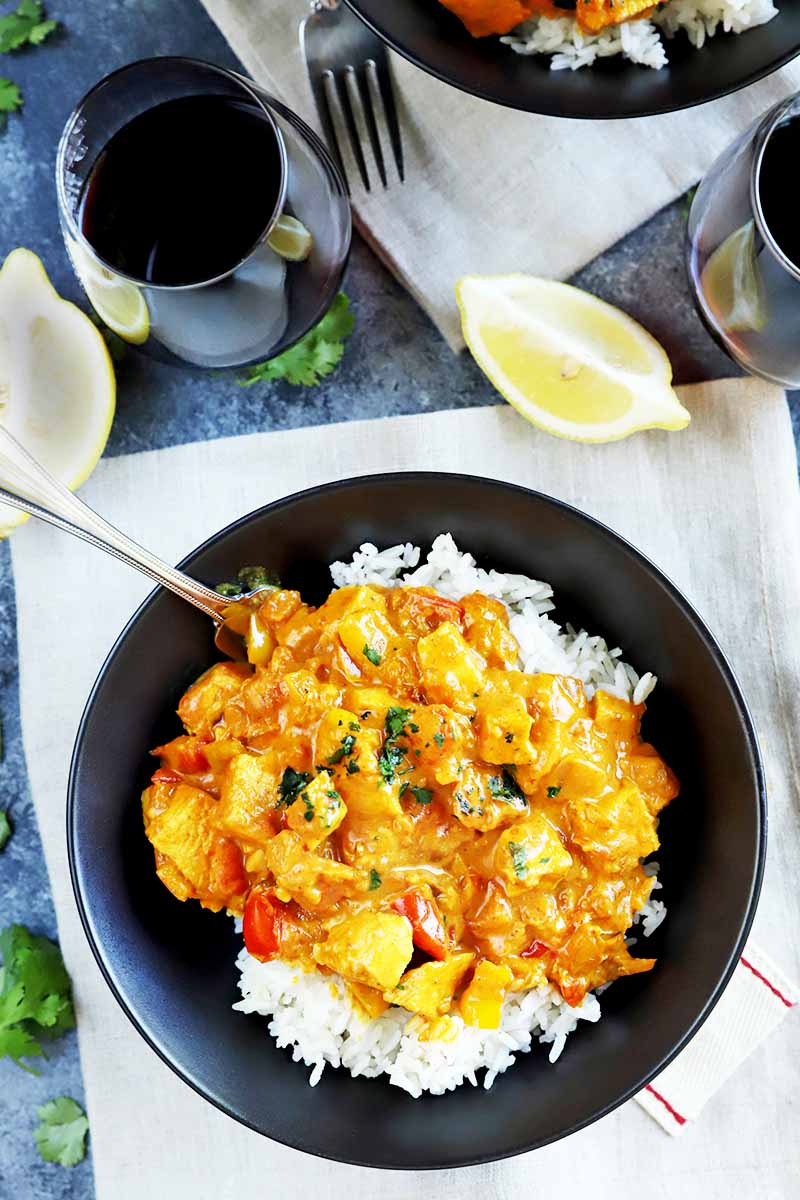 The moment those glistening pillows of garlicky dough arrived on our table, followed by a creamy, spicy chicken mixture paired with some buttery, fluffy basmati rice that I all but licked off the solid white plates, I knew an important change had just occurred.

I could never go back to being the person I was, one who sometimes tolerated but never especially loved Indian cuisine.

From that point on, I was all in. My willingness to experiment, the craving that I felt for new tastes, and my love for this food just grew and grew. 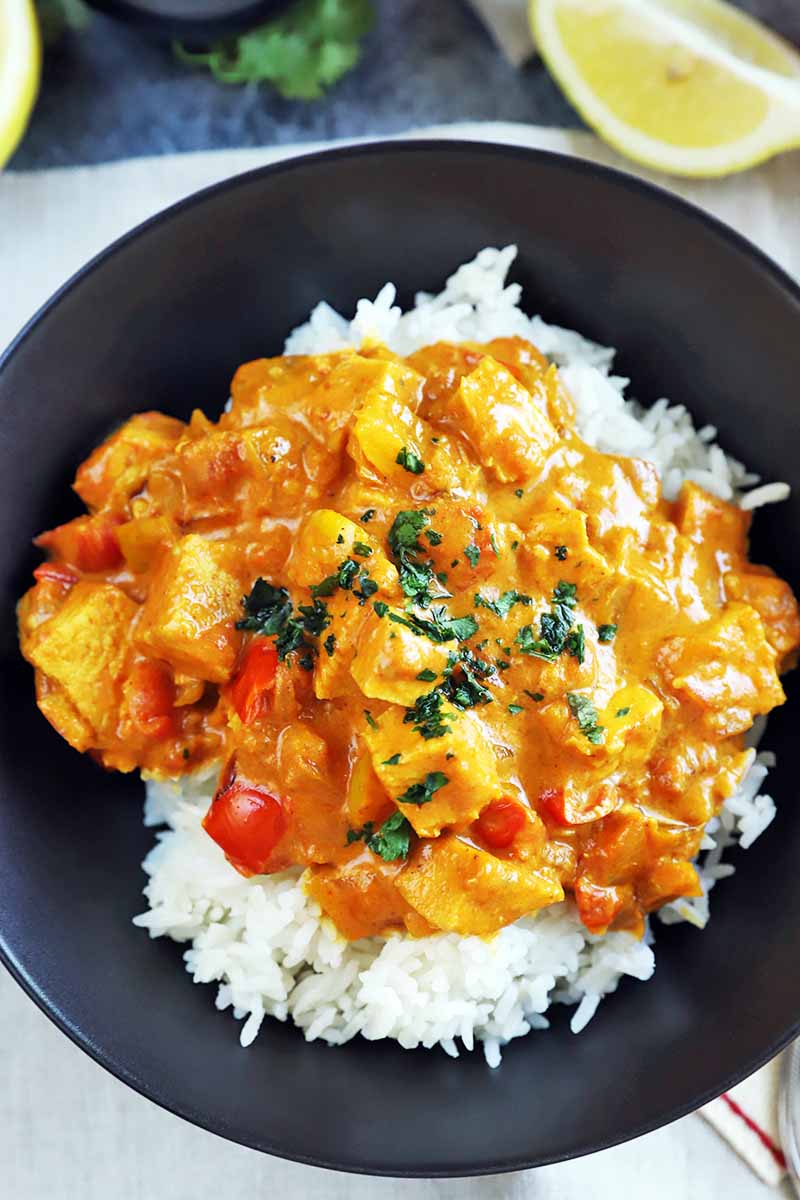 More than a few times over the past year, at random times when the fridge has been lean but the spice cabinet full, Tim has whipped up a curried dinner out of celery and carrots and rice.

Without fail, this leaves me speechless every time, eyes welling up with tears at the thought that such a meal could come from the simplest ingredients, made lovingly by my husband.

Over time, he’s taught me a few tricks of the trade, and I’ve become more heavy-handed with the heat level in my own cooking.

Now, one of our regular dinners is a bunch of chopped vegetables, sauteed on the stove and mixed with spices and cream. It’s the kind of thing that just slightly burns your throat as it goes down, offering proof that sometimes the simplest (and cheapest!) foods can make the best meals.

Similar to the butter chicken that first wooed me toward loving this world of curried delights, chicken tikka masala is a classic entree at Indian restaurants made with a tomato-based creamy sauce and a blend of fragrant spices. There is no shortage of recipes for either of these dishes online, but our version has one great advantage going for it: it’s fast. 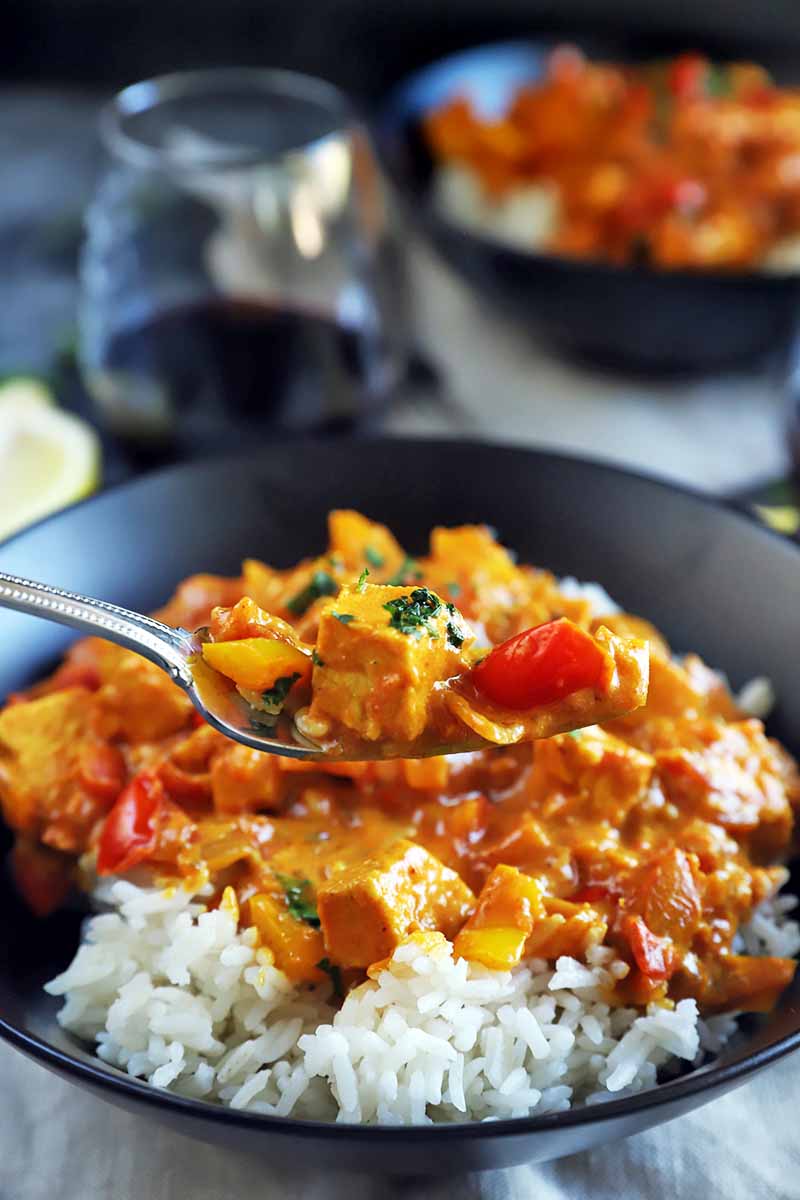 Recently, I had some leftover roasted chicken in the fridge and a desire to make a meal as quickly as possible. I was looking for a nuts-and-bolts set of directions to use as a guide, instead of a ruler.

Over at Serious Eats, I found this:

“The basics of masala sauce are simple: start with a base of aromatics – onions, garlic, and ginger are common – cooked in oil, ghee, or butter. Add a simple spice mixture, largely based on cumin, coriander, and chilis, throw in some canned tomatoes, cook them down, then puree the whole deal with heavy cream and fresh cilantro.” – J. Kenji Lopez-Alt, Chief Creative Officer, Serious Eats

A bunch of chopping, a little sauteing, and less than an hour or so later, we had this meal on our plates, created via my own version of following the general guidelines outlined above.

It was easy to make, it was spicy, and by the end of the meal, it had us wiping our plates as well as the skillet and the wooden spoon clean, wishing for more. 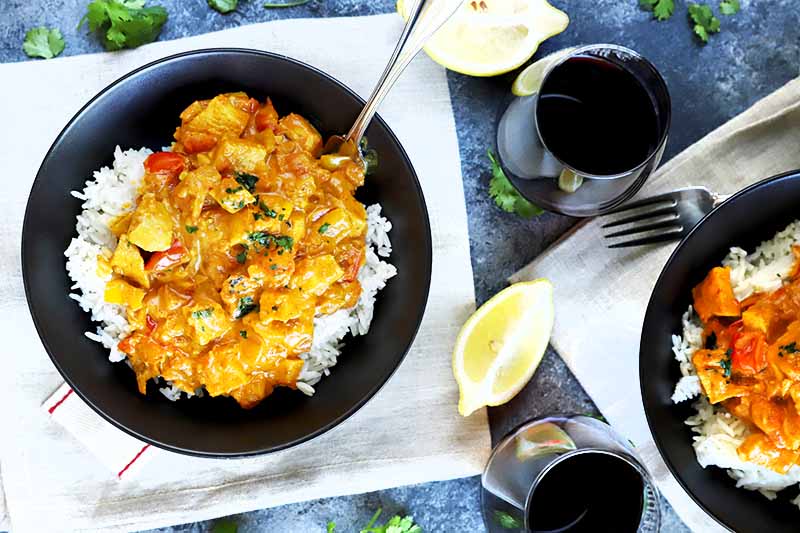 I can’t believe how much of my life I wasted thinking I was not a fan of this style of food, and I’m so glad the one to open my eyes was Tim.

Since the idea here is quick meal prep, precooked chicken is key. Ours was roasted the day before and pulled off the bone, but you could probably use boiled, too. Or take a trip to the grocery store and pick up a premade rotisserie bird.

Better yet, we skipped the cream and opted for delicious dairy-free coconut milk to create the creamy and flavorful sauce.

Quick, dairy free, homemade, and packed with flavor? I don’t know what could be better than that.

Do you have 30 minutes? That means you have time to make this speedy chicken tikka masala. The creamy dish is better than take-out and it’s dairy free.

Grate enough peeled, fresh ginger until you have 1 1/2 teaspoons total.

Chop enough peeled white onion until you have 1 cup. I used about half of a large onion.

Peel and mince 3 cloves of garlic. A garlic press is a great tool to have for this. 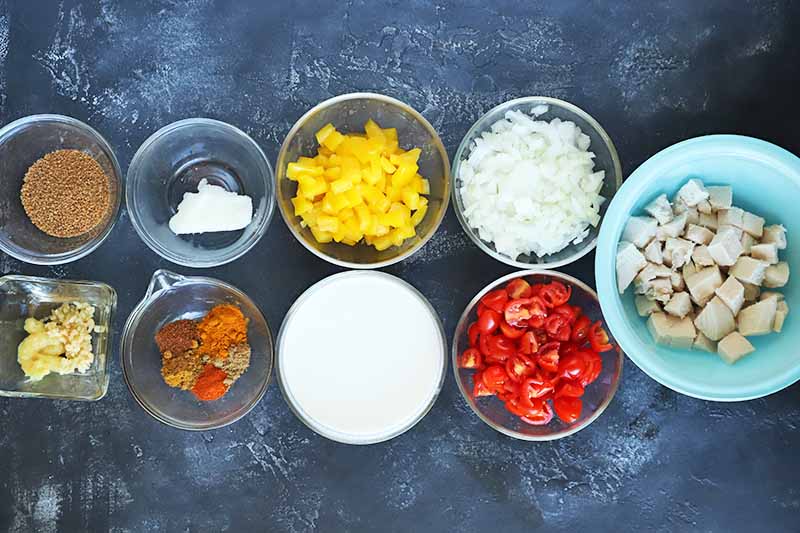 Remove the stem, seed, and chop a yellow bell pepper.

Chop enough grape tomatoes into quarters until you have 1 cup total.

Chop enough cooked chicken until you have 1 cup total. The chicken can be cooked in any style. I prefer roasted, but poached, grilled, or even boiled chicken will work!

Add the coconut oil to a large skillet over medium heat. Once it has melted, stir in the ginger, onion, garlic, and bell pepper. 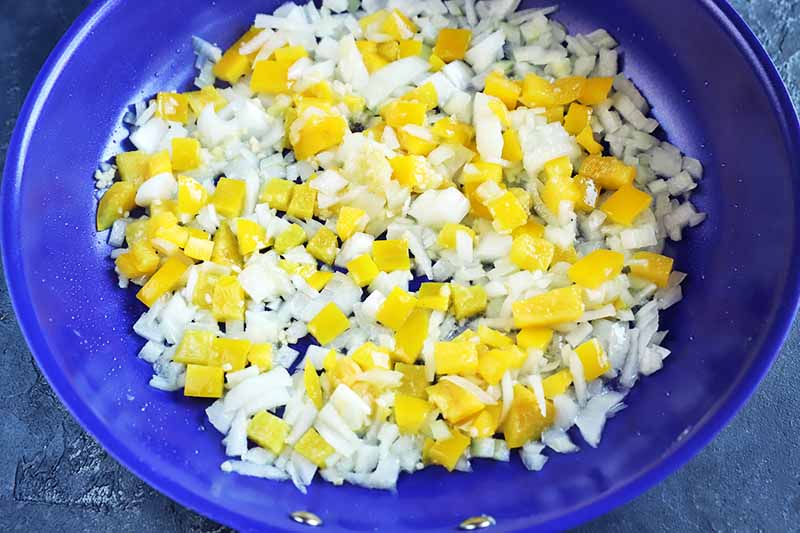 Cook, stirring occasionally, until the vegetables are softened, about 5 to 7 minutes.

While the vegetables are cooking, make the spice blend. 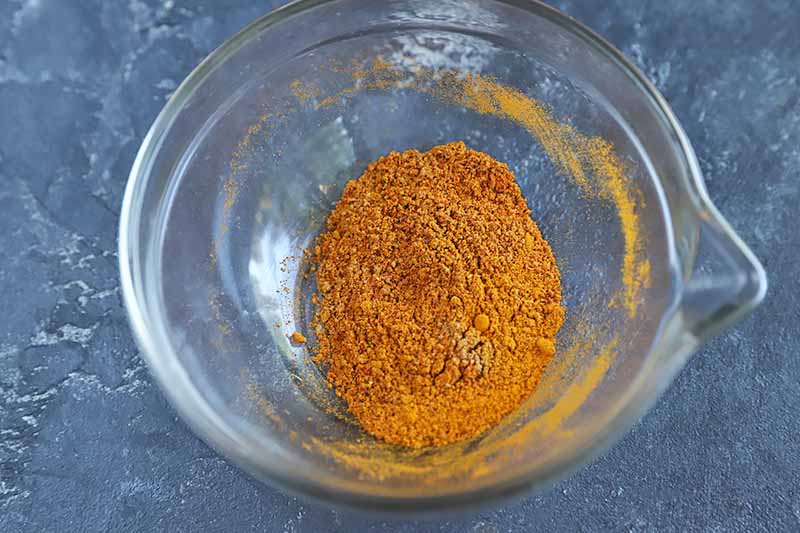 Add the cayenne, cumin, garam masala, coriander, and turmeric to a small bowl. Stir together until combined.

When the onions start to turn golden, add the spice mixture, making sure it hits the pan directly to toast. 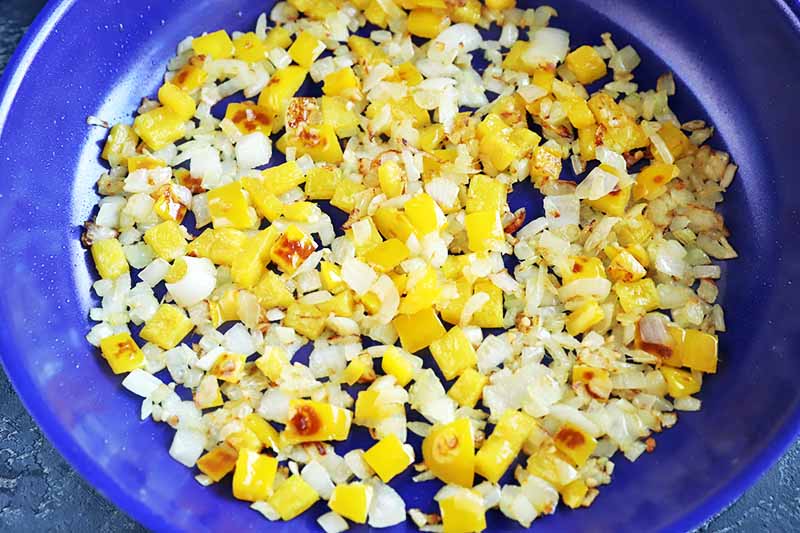 After about 30 seconds, stir the spices in to coat the onion and peppers.

Cook for an additional minute or two, stirring occasionally. 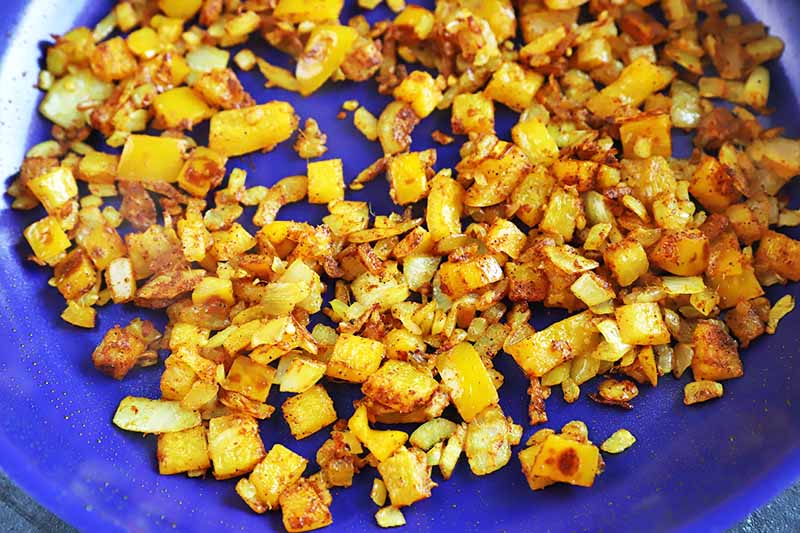 Stir in the tomatoes and toss to coat. 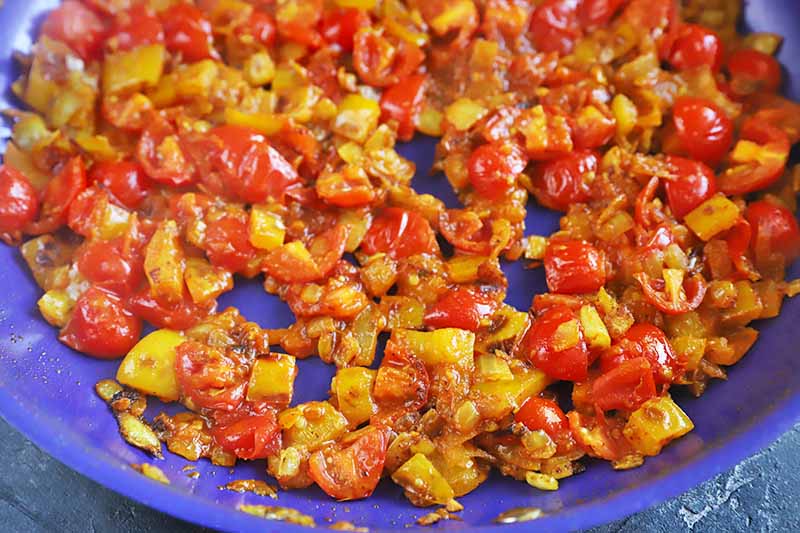 Cook the tomatoes with the rest of the vegetables for about 3 to 4 minutes, until the tomatoes start to break down.

Stir in the coconut milk, chicken, salt, and sugar until everything is combined and coated well. 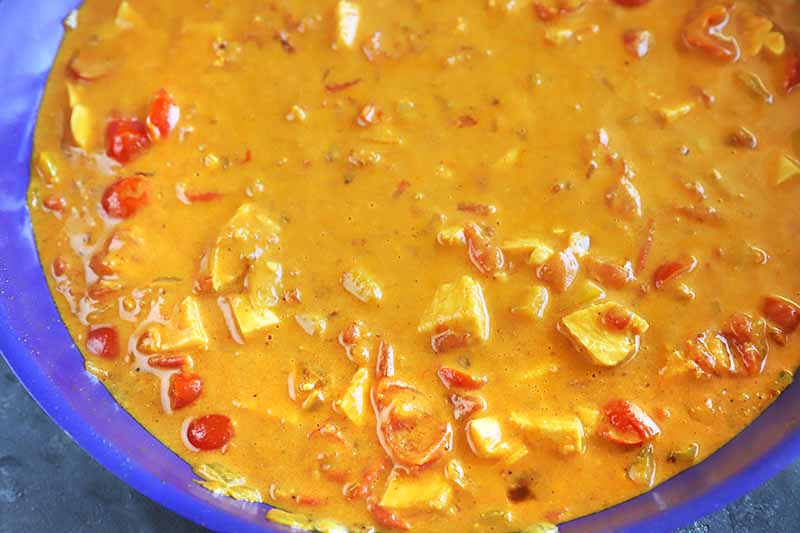 Continue to cook, until chicken is heated through, the flavors meld together, and the liquid begins to reduce a bit, about 5 minutes.

Taste and adjust the seasonings if you need to. Serve immediately.

What Else Should I Serve with Chicken Tikka Masala?

As you know from my description above, chicken tikka masala makes a wonderful companion to fluffy white basmati rice. You can also opt for brown rice, depending on your preference of course.

A few fluffy pieces of garlic naan also make a delicious accompaniment. And if you’re looking for something green, think about adding a simple tomato, cucumber, and onion salad on the side dressed with lemon juice (aka kachumber), or some steamed vegetables like broccoli and cauliflower. 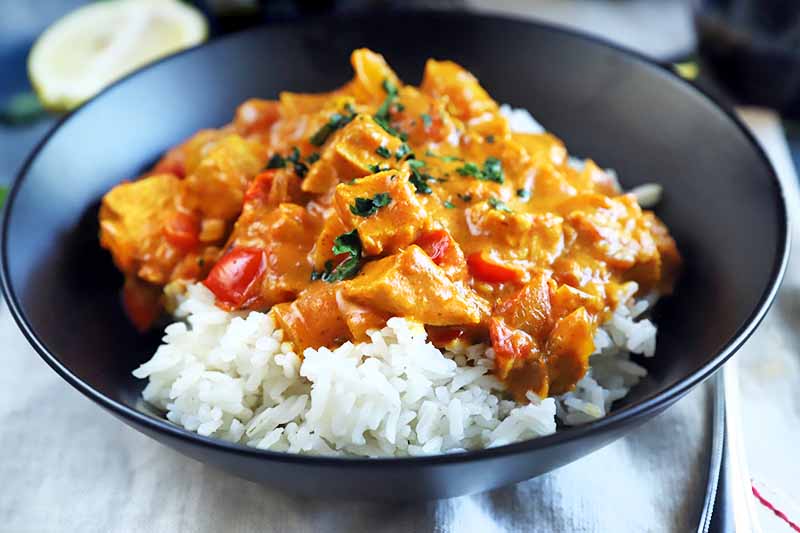 Ready to give even more delicious Indian-inspired dishes a go at home? Try these recipes next:

Do you prefer white or brown rice with your Indian dishes? Tell us in the comments below. And once you try the recipe, be sure to come back and rate it here!

Photos by Meghan Yager, © Ask the Experts, LLC. ALL RIGHTS RESERVED. See our TOS for more details. Originally published on November 9, 2012. Last updated: May 3, 2021 at 18:15 pm. With additional writing and editing by Meghan Yager and Allison Sidhu. 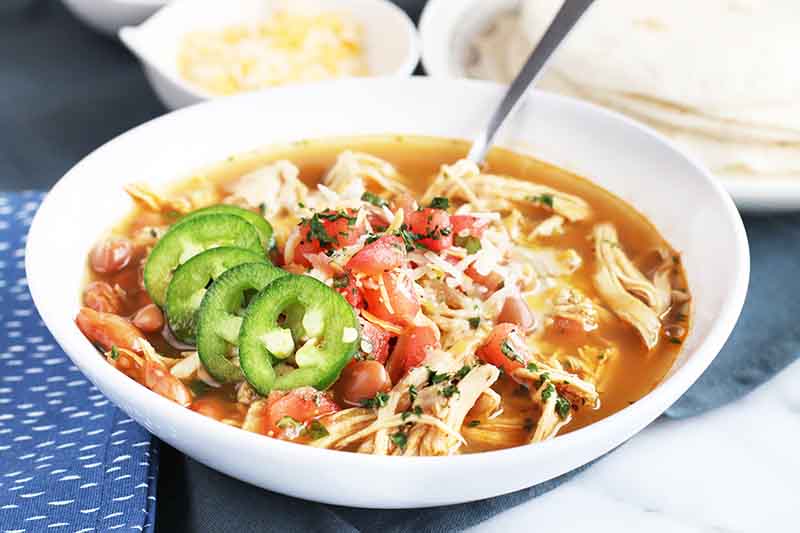 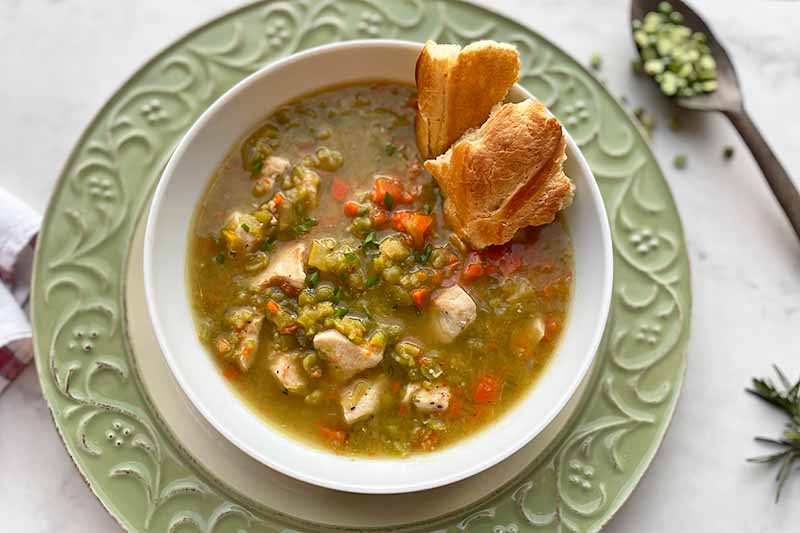 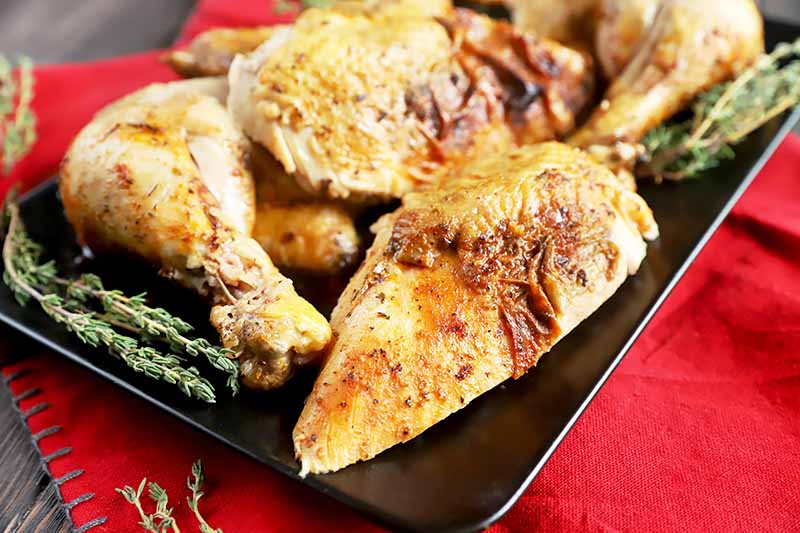