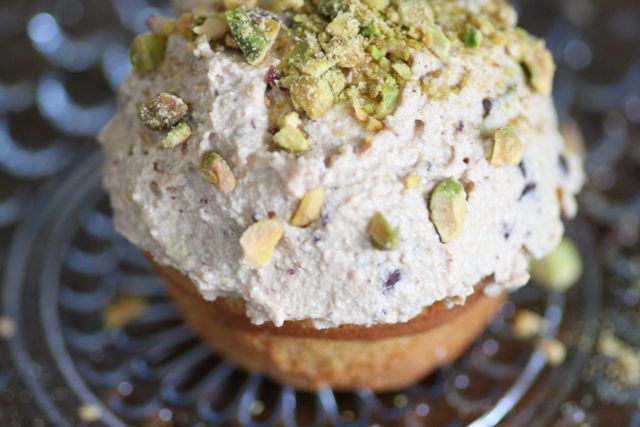 When I was a kid, my parents would dart around the house in the final moments before company arrived, lighting candles, cleaning bathrooms, setting appetizers out just right. You could feel the energy in the air in those almost-game-time minutes—a sort of nervous, happy energy—something greater than the sound of my mom’s boom box playing its background harps or violins. When the doorbell rang, my dad would rush to the door, opening it proudly, beaming, welcoming guests inside as he took their coats and greeted them, motioning my brother and me to come say hi. Then, my mom would emerge from the kitchen, winded but obviously delighted at whatever was in her hands, prompting oohs and ahs and questions from the ones who’d been invited to come. Each one meal and its accompanying conversation would take two or three—maybe four or five with particularly talkative friends—hours before dishes were being cleared and the food getting wrapped up and people’s coats being pulled back out to usher them to their cars. But, as any host could tell you, its planning began long before, sometimes as much as a month ahead of time. Long before the good china was on the dining room table, I’d see my mom jotting down a potential menu and shopping list; I’d be around when she tested recipes before deciding to serve them to company; I’d be there the week of the dinner, when my parents talked about what they were making and at what time guests would arrive.

As an adult myself, I’ve followed my parents’ footsteps, often clumsily, feeling my way from the early days of solo hosting (where, once, my guest and I continued working on the uncooked chicken together after she arrived), to my current stage of couple hosting (where Tim and I tag-team the process).

Over time, I’ve grown more confident. Having one person for dinner isn’t stressful; having two is usually okay; but, last weekend, when we hosted Tim’s entire family for an early celebration of Easter and the annual April birthdays (of which, in his family, there are four), and we had ten people at our table more than once, I have to admit the experience felt completely new. 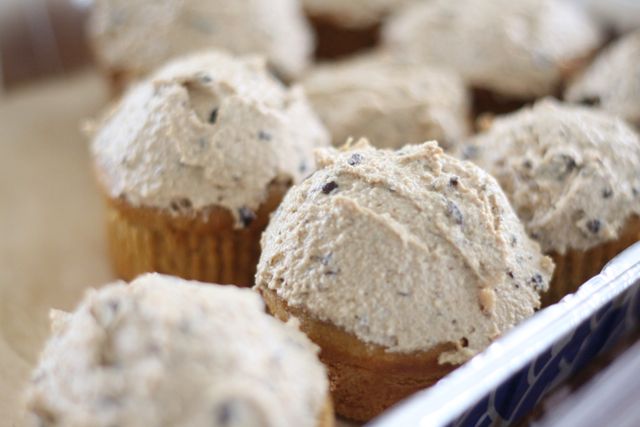 Weeks beforehand, we planned menus. Next was grocery lists. A full week ahead of time, I was baking and freezing cupcakes, cooking and freezing lamb stew. And from estimating food needs (how much do 10 people eat?) to wondering about expectations (will we disappoint our family?) to cleaning (which, regrettably, often gets put off until just such an occasion, when you know company’s coming), I thought to myself more than once, this is not easy. As much as I love those beautiful Kinfolk dinner parties and glossy Martha Stewart magazines, let’s just be real: hosting people is work.

Over the course of the three days we had family in town, our sink saw more dishes than it typically sees in a full week. I woke up in the middle of the night wondering if I’d given the stew enough time to thaw in the fridge (no, if you’re curious). Tim and I filled three huge pots with stew and served it to eight other people, alongside salad and sliced bread and fruit. We pulled out dozens of cannoli cupcakes, three kinds of Tim’s homemade ice cream, einkorn walnut cookies and coconut macaroons. We exchanged presents. We had a family photo shoot. We went thrift-shopping with my sister-in-law. We hit the Nashville Flea. 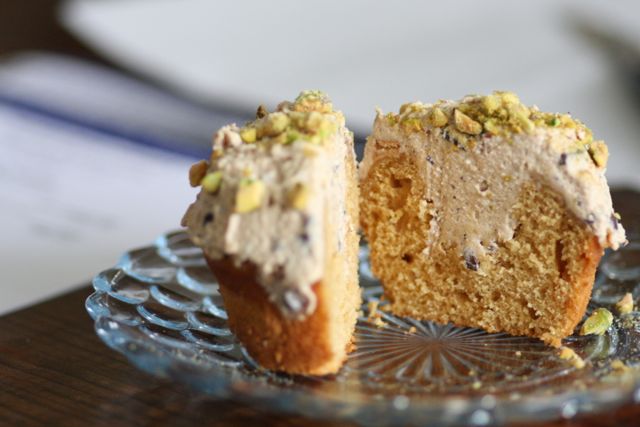 And at the end of the weekend, after all of that preparation, with a sink still filled with dishes and a once-stuffed fridge once again empty and ready to be filled, we realized the thing about hosting that keeps people doing it again and again, the thing I, in the innocence of childhood, probably realized about hosting way before I realized how much effort it takes.

Because, while planning meals and making them, buying groceries and using them to feed others, sitting around a table filled with people you call family, sharing the fruit of weeks of effort and some stress is genuine work, it is also this, and don’t discount it: such enjoyment and pleasure and fun. This past weekend, we tasted the reality that it is such a gift to get to give to other people; it is so rewarding to spend yourself for someone other than yourself. And, also, it is such a gift to have them let you. We’re glad we could.

Cannoli Cupcakes
Makes between 20 and 24 cupcakes

So here’s the idea for these cannoli cupcakes: the filling typically inside a cannoli shell, stuffed inside and on top of yellow cupcakes, with chopped pistachios scattered on top. You guys. They remind me of my grandma and they’re a near cousin to a ricotta cake symbolic of April birthdays in Tim’s family. Mostly though, they’re sweet (but not too sweet), a throw-back to Italian bakeries and a real show-stopper in terms of visual and taste appeal.

If you want to make them ahead of time: The cupcakes themselves may be baked ahead of time and frozen, so long as they’re thawed a day before frosting/serving. It’s best to frost them the day you want to serve them, but keep in mind the ricotta filling must be strained overnight, so you’ll want to start that the day before.

*You’ll note I ground the sugar in a food processor for both the cupcakes and the ricotta filling; this is to give it a lighter consistency, one more akin to powdered sugar.

Ingredients:
1/2 cup butter (1 stick), softened
1/2 cup olive oil
1 1/2 cups coconut sugar
4 eggs
2 teaspoons vanilla extract
2 3/4 cups einkorn flour
3 teaspoons baking powder
1 teaspoon salt
1 cup milk
1/2 cup yogurt
1/4 cup water (In my three batches this month, I’ve made the cupcakes with and without water, all with good results, so this may be omitted if you like.)

Start by grinding the sugar in a food processor or high-powered blender*. Then, cream it with the softened butter and olive oil in a large bowl. Beat in the four eggs, one at a time, and add the vanilla.

Sift the flour into a separate, medium bowl, along with the baking powder and salt.

In a small bowl, combine milk, yogurt and water.

Bake cupcakes for 25 to 35 minutes, until a tester inserted in the center comes out clean. Remove from muffin cups to another surface as soon as you can to prevent cake falling. Let cool completely before frosting. Note that I also like to remove the paper liners once they’re cooled.

to make the filling (begin the day before serving!):
Line a strainer with cheesecloth. Place the ricotta in the strainer over a bowl, and cover the bowl with plastic wrap and a towel. Weight it down with a heavy can, and let the ricotta drain in the refrigerator for several hours to overnight.

When ready to make the filling, grind up the sugar in a food processor or high-powered blender to get it to more of a powdery consistency. Then, using an electric mixer, beat the ricotta in a bowl until smooth and creamy. Add in the sugar you’ve processed in a food processor, the cinnamon and the vanilla, and blend until smooth. Stir in zest. Fold in the chopped chocolate. This mixture may be covered and refrigerated for up to 24 hours; or you may use it right away.

to fill the cupcakes:
To make holes in the cupcakes, cut a cone out of the top of each cupcake (these bits of cake may be eaten or saved for later)—a good explanation of this method is here, although I don’t bother putting the top of the cone back into the cupcake before frosting. Then, stuff the holes with the ricotta filling and spread more filling over the top like you would if you were frosting a cupcake. Sprinkle chopped pistachios on top for garnish and you’re set. 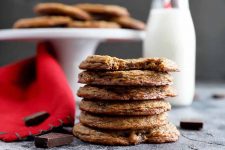 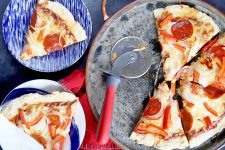 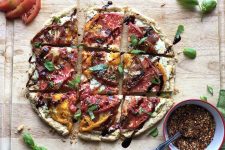 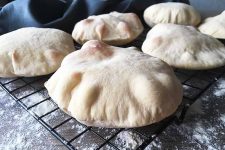 Einkorn Flour Pita Bread: A Perfect Pocket for All Your Tasty Food! 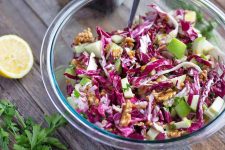 Einkorn Salad with Radicchio and Walnuts 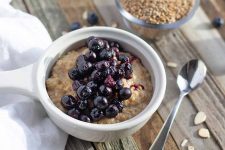 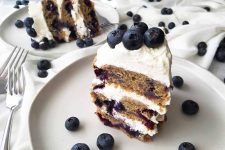 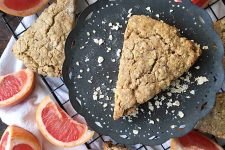 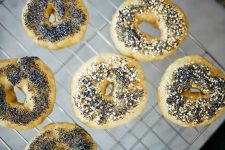 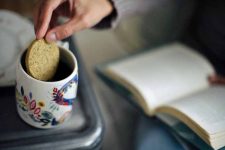 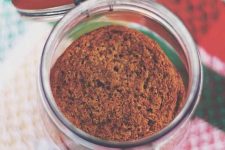 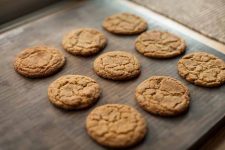