Last night, I had dinner with my friend Jacqui, someone I first met through an editorial internship three years ago, but later came to know through our food blogs (started on the exact same day last August, would you believe it?) and who inspires me, with simple-enough-for-me-to-try fried green tomatoes and stories about her family that give me chills right in the middle of my day and, lately, stories about beets, the purple root vegetable I have never, ever before tried or bought or held, even, but found a bunch of in my Saturday CSA box. 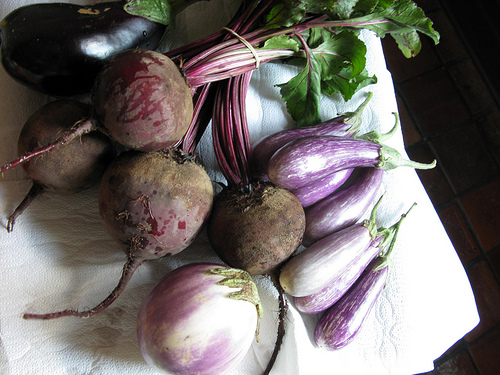 And while Jacqui regularly amazes me with phrases like, But I don’t have a baking sheet, or We don’t keep sugar in the apartment, or Could I bake that in a casserole dish instead?, she also possesses an attitude toward vegetables – and all food, really — that is as open-minded and I-will-try-that-too as I could ever hope to be, without making me feel silly for ordering something called a chicken puff at the Thai restaurant she took me to, after I asked her things like, What is Pad Thai? and How do you make fried rice?

So anyway, when I saw her recipe for beets Sunday, luring me with likenings of beets to jewels or lipstick kisses, I felt less terrified of the purple beasts inside my box, more empowered. I knew what I would do.

And after scrubbing, trimming and placing the beets in my Lucy Le Creuset with a little water at the bottom, I stuck the whole thing in the oven for about 45 minutes, later pulling them out, draining, cooling and then wiping away their skin with my plastic-gloved fingers.

Everything she said was right, from the way the gnarly exterior gives way to something shiny and glistening to the way they taste, eaten just plain, like the earth they came from. 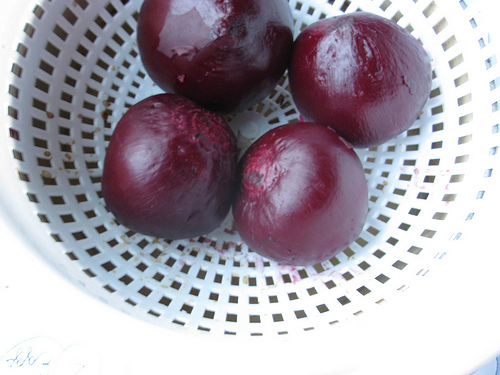 Seeing as this was the first time I had ever had a beet, I tried very hard to discern their flavor or texture: like you’d expect of a vegetable, hearty, smooth, slightly sweet, almost like a cooked carrot. While I wouldn’t say it was love at first bite, I do think we’re on to something, beets and me, and we’ll have a lifetime to get the kinks worked out.

Plus, and I hate to be all nutritionist on you, but have you seen all the health benefits of beets? They’re said to be preventative forces for heart disease, colon cancer, stomach cancer, inflammation — I mean, hello, right? Doesn’t that just make you want to want beets?

And I think that’s half the battle. (Side note: I never thought I could see myself becoming one of those parents who tried to talk her kids into eating their vegetables, but I see that as a genuine danger now, increasingly so with every article I read. Those poor future children.) 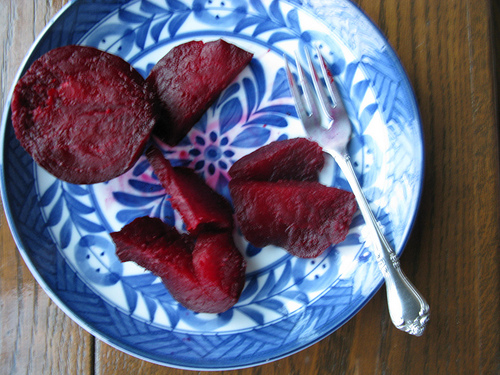 After I ate an entire half a beet, all by itself, I Tweeted something that yielded me yet another discovery: beets can be a secret weapon in a moist chocolate cake!

The next day, when I’d Tweeted about the cakes, Jacqui said, Of course I would make a cake with beets. And she’s right: I am comfortable with baking; she’s comfortable with cooking; but with the real, honest connections we’ve made through blogging, we are both learning a little more about each. 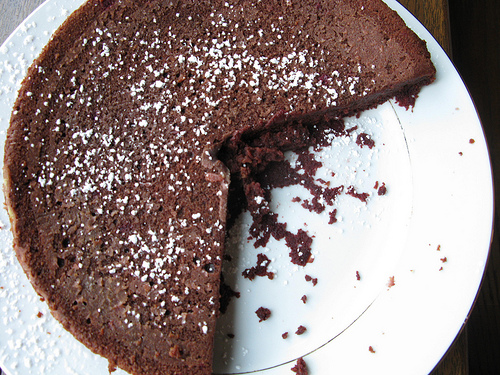 You should save the greens because they can be treated like kale or spinach, and are a treat lightly sauteed.

Ingredients:
6 small beets, scrubbed and trimmed (or 3-4 large or medium)

Directions:
Preheat the oven to 425 degrees F. Place the beets in a baking dish with about half an inch of water, and cover it tightly (I used a lid; Jacqui used aluminum foil).

Roast for 40 to 50 minutes (smaller beets: less time; larger beets: more time). You’ll know they’re done when you can easily stick a fork in them.

Drain the dish and allow the beets to cool. When cool enough to handle, use plastic gloves or paper towels to peel/wipe away the skin. It will rub right off, falling into your hands like you’re wiping smudges away – truly amazing. 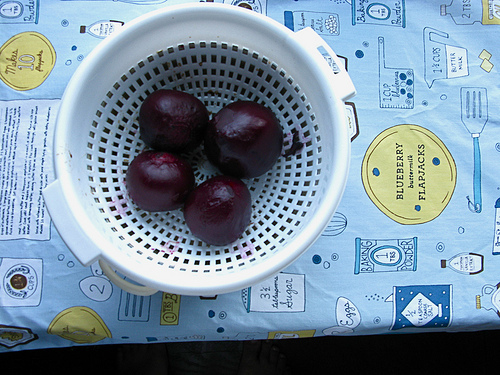 You can eat them plain; coated with olive oil, honey and balsamic; or, heck, pureed and added to your favorite chocolate cake. The possibilities are endless. 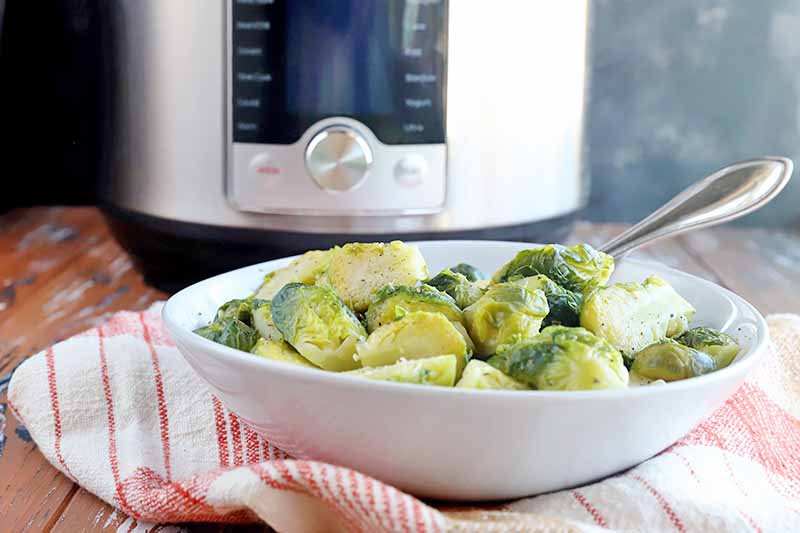 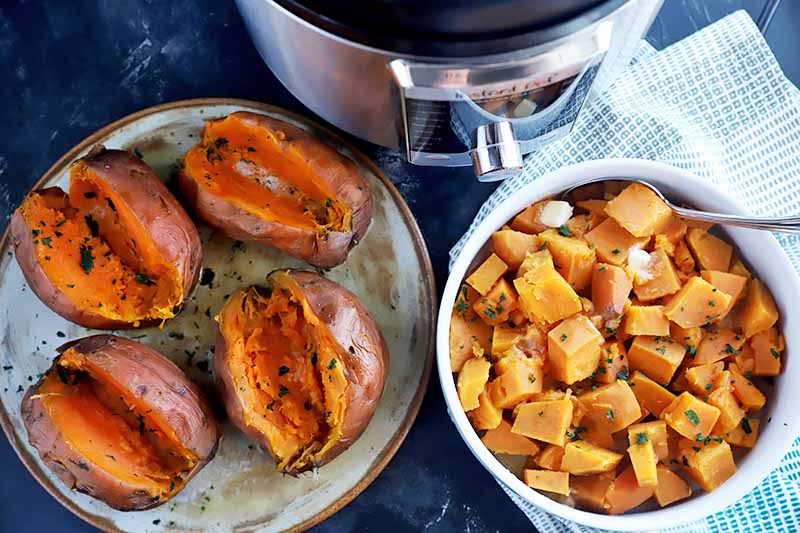 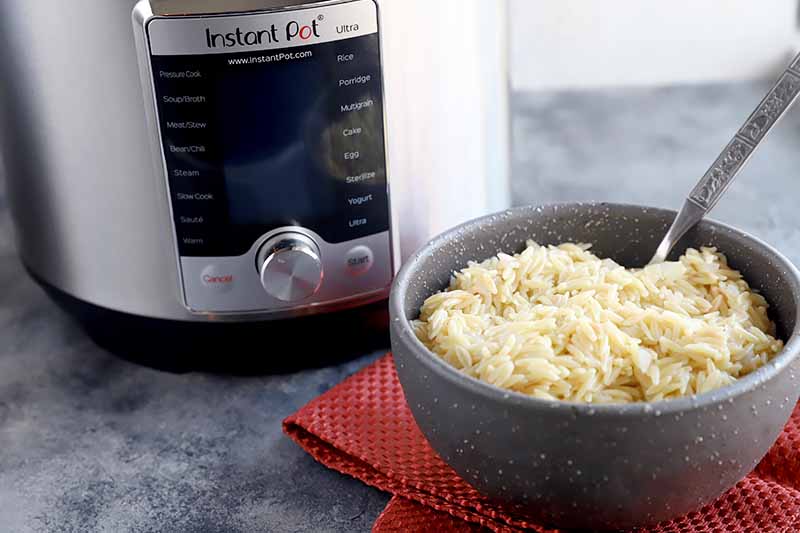