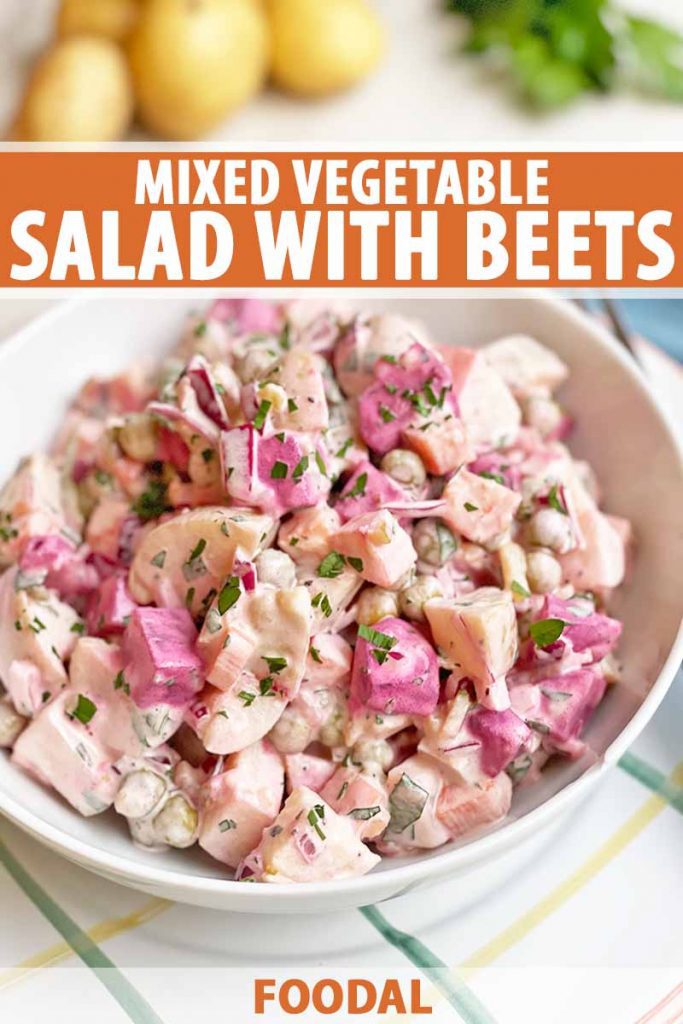 I think potato salad is hilarious. 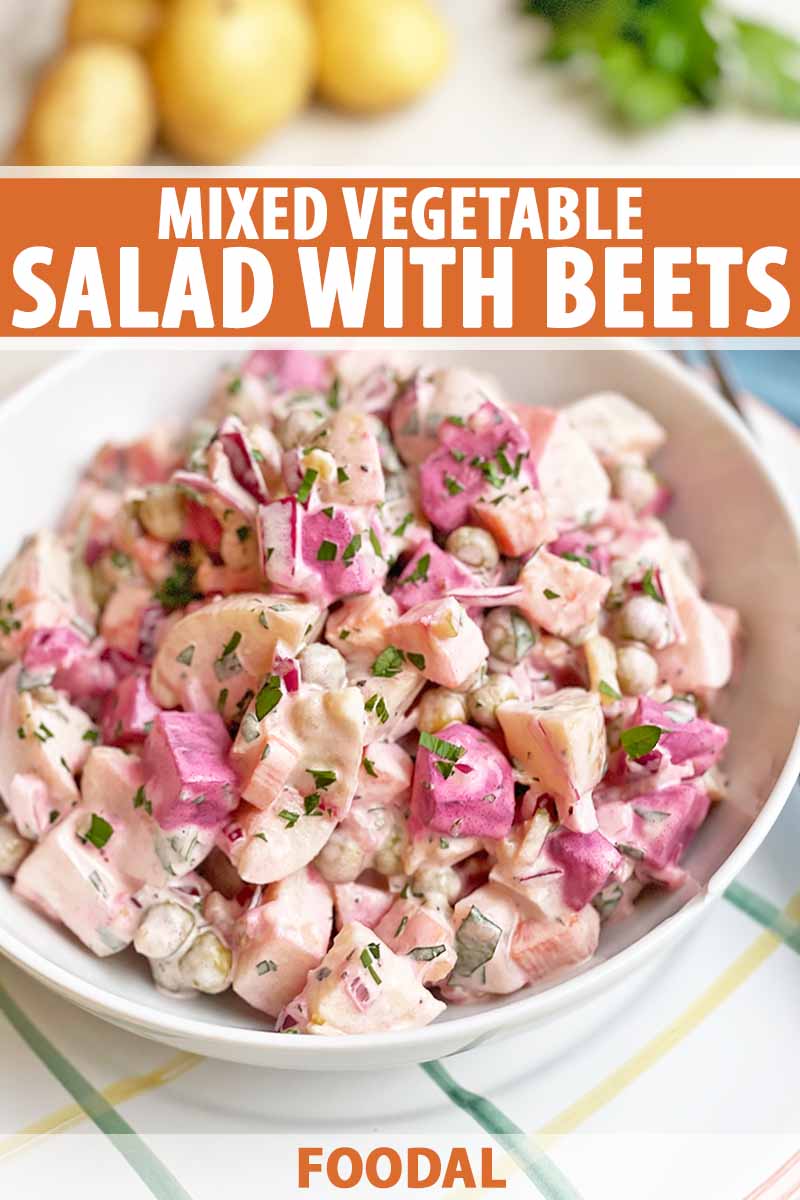 Granted, I didn’t just wake up one day, point to a mayonnaise-slathered container of taters, and burst into laughter. That might have worried my family.

Giggling at the thought of potato salad became second nature when my parents played the 1945 film Wonder Man for me as a child. The story follows the ingenious Danny Kaye (the Jim Carrey of that era) in the roles of both Edwin Dingle and Buzzy Bellew.

Throughout the movie, Kaye’s consciousness floats back and forth between the twin brothers, and one repeatedly remembers that he abandoned his date to pick up a pint of potato salad from the deli down the street. 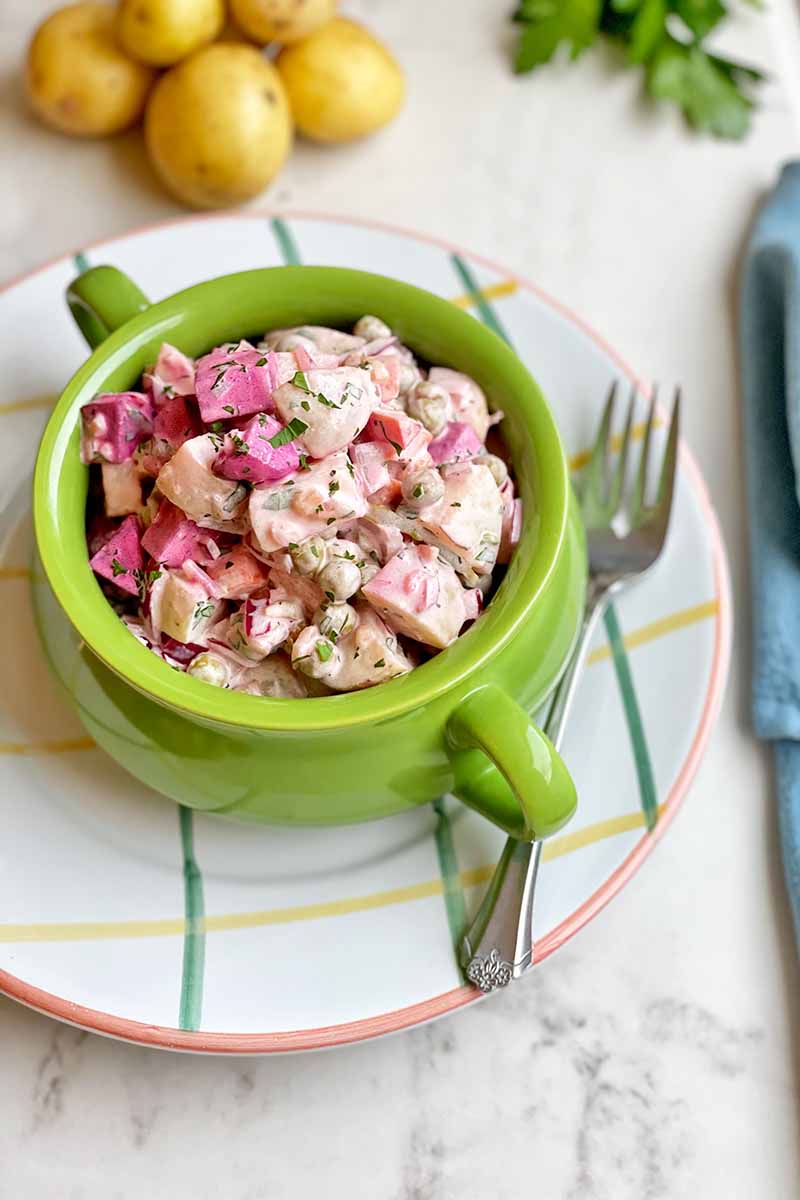 “Potato salad!” he continually exclaims as he’s shaken back to reality and realizes he’s a mild-mannered ambidextrous bookworm (not a nightclub performer who was just shot by a hit man masked as a delivery service driver carrying flowers).

Come on. Tell me that’s not funny.

The hilarity of his expression has stuck with my family, and while my dad and I consider “potato salad!” to be a running joke, the side dish itself is also something we take very seriously.

I’m an advocate for anything incorporated into a mayo-based mixture, and it’s hard to beat tender potatoes folded into a creamy dressing. That is, unless you introduce beets into the equation.

If at first glance the title of this recipe made you question whether you were about to stumble upon yet another spin on roasted beet salad (you know, the classic kind with peppery greens and goat cheese), let me clear things up: 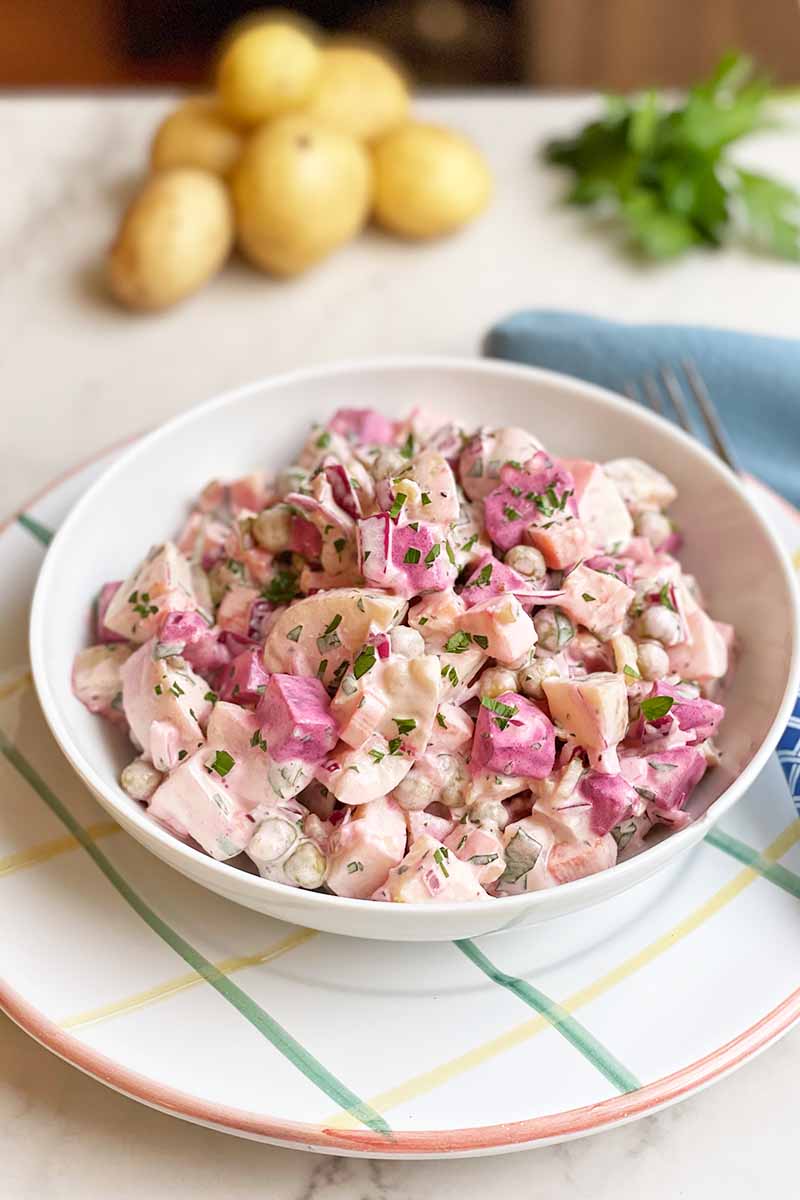 Though the name may seem a bit deceiving at first, it describes the various elements of this dish quite accurately. Essentially, what we have here is a vegetarian version of what’s often referred to as Olivier (or Olivye) salad.

Also known as Russian potato salad (which is a fantastic alter ego, if I do say so myself), this colorful combo is traditionally a hodgepodge of peas, potatoes, carrots, hard-boiled eggs, meat, and sometimes apples.

In Russian cuisine, Olivier salad is a popular treat at holiday gatherings like New Year’s Eve, Christmas, and Easter – but it’s also a staple at regular family get-togethers.

Diced bologna, chicken, or ham is often used, but our version keeps things strictly meat-free. And as a twist that brings bold color and flavor, boiled beets hitch a ride to the party just before serving time.

Every veggie that’s included offers something different. The peas bring an unexpected snap, and the carrots provide a sweet crunch. The potatoes, perfectly tender, are responsible for the prominent buttery flavor, and the beets add earthiness. 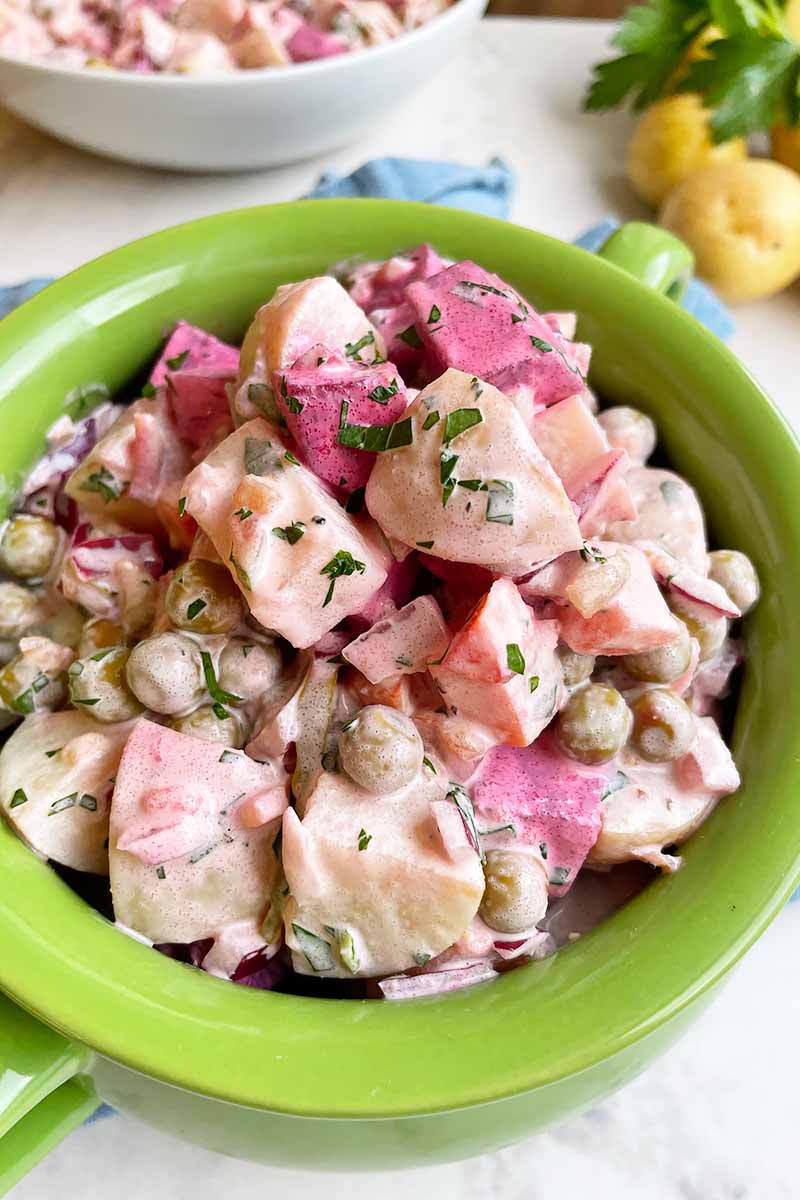 I dig sweet pickle relish as a tangy counterpart, but feel free to swap in the savory dill variety if that floats your boat a bit more. And don’t be shy with the parsley, as its herbaceous, grassy notes aid in creating an overall freshness.

Let the contents (sans beets, unless you’re using golden ones) mingle in the fridge for at least a few hours. Once they’ve gotten properly acquainted, in go the crimson cubes, which contribute a fuchsia tint to the salad – as opposed to completely overtaking it with purple tones.

Even if you’re hesitant about mixing all of the components together to create this carby concoction, just trust me. Even Danny Kaye would have been hooked after one wondrous bite.

Come to think of it, maybe that’s how that movie got its name…

Vibrantly tinted with beets, this Russian potato salad is a treat. It’s loaded with sweet, crunchy peas, sharp red onion, and carrots. Get the recipe now.

Step 1 – Prep and Boil the Beets, Potatoes, and Carrots

Peel the beets and carrots, and the potatoes if you wish. Otherwise, scrub them well.

You can wear gloves to keep the beets from staining your fingers. Cut the beets and potatoes into 1/4-inch cubes, and dice the carrots. 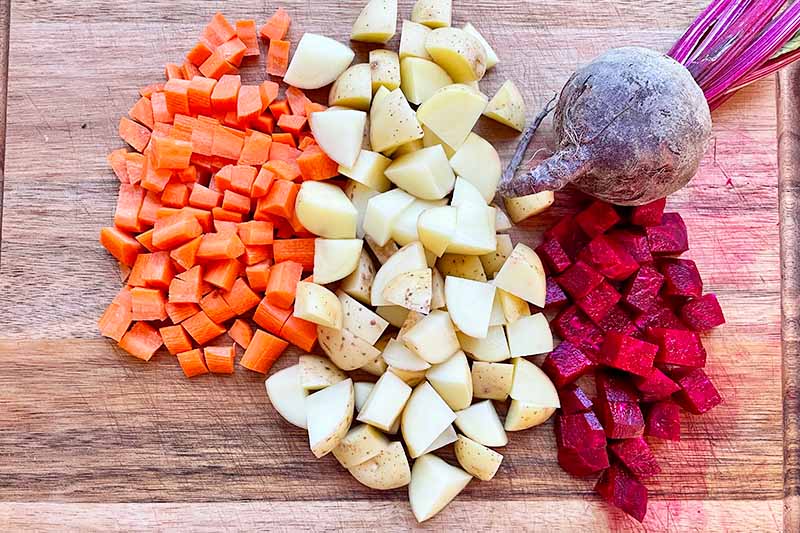 Place the beets in a medium-size pot over high heat and cover with cold water. In a separate pot, do the same with the potatoes. If you opt to use golden beets, you can boil them together since they won’t discolor the potatoes.

Bring both to a boil, and then reduce the heat. Simmer until the beets and potatoes are tender (but not overly soft), and a knife can easily pierce the flesh. This should take about 8 to 10 minutes, depending on their size.

Set the beets aside to be refrigerated once they cool down. 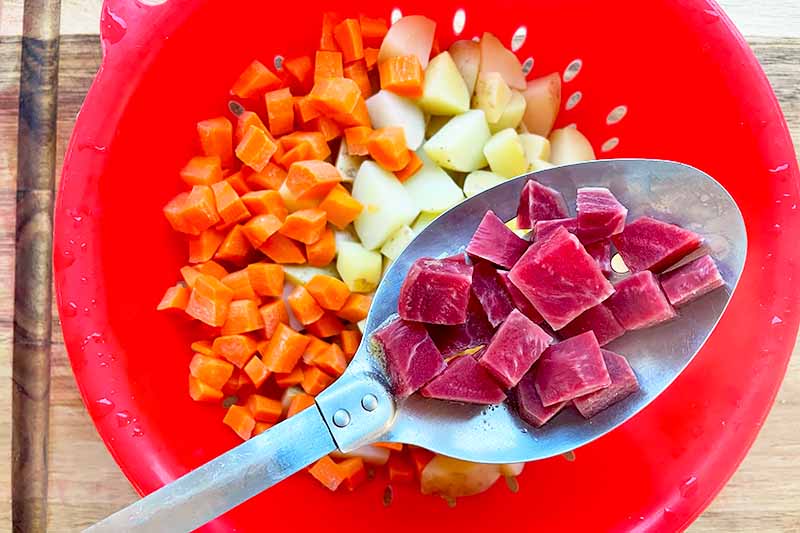 Remove the potatoes from the pot and transfer them to a large mixing bowl, reserving the cooking water. Place the pot with the cooking water back over medium-high heat. Add the carrots and simmer until they are tender, for about 4 to 6 minutes.

Heating the canned peas through for food safety is also recommended.

Step 2 – Prep the Salad Ingredients and Make the Dressing

Mince the onions and chop the parsley. 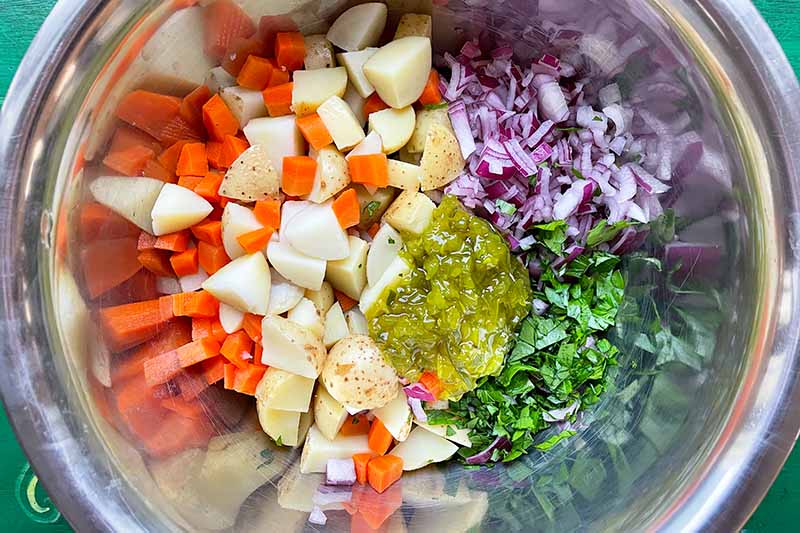 Add the carrots to the bowl with the potatoes along with the peas, onion, pickle relish, and parsley. If you used golden beets, they can go in now instead of being folded in just before serving. 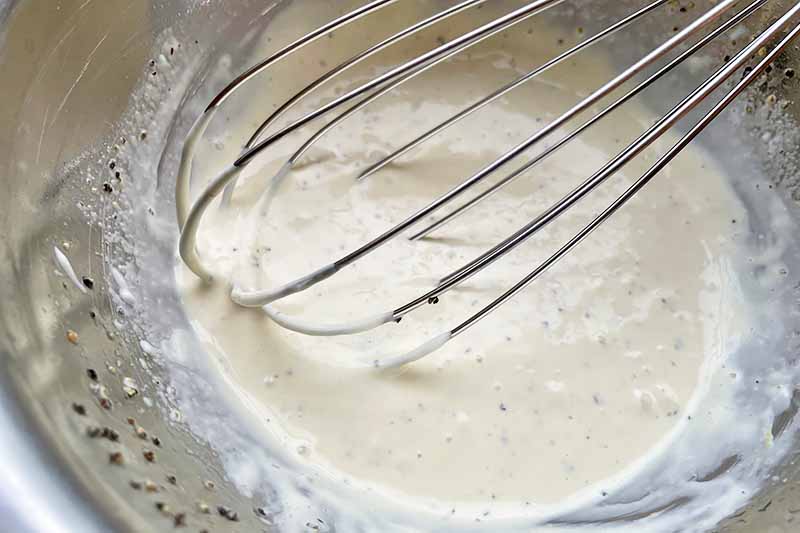 In a separate small bowl, whisk together the mayonnaise, white wine vinegar, mustard, salt, and pepper. The dressing should be tangy and salty, since the veggies are unseasoned.

Step 3 – Toss the Dressing with the Veggies

Add the dressing to the veggies and carefully fold everything together with a rubber spatula. You want to do this gently so you don’t crush any of the tender veggies like the potatoes and peas. 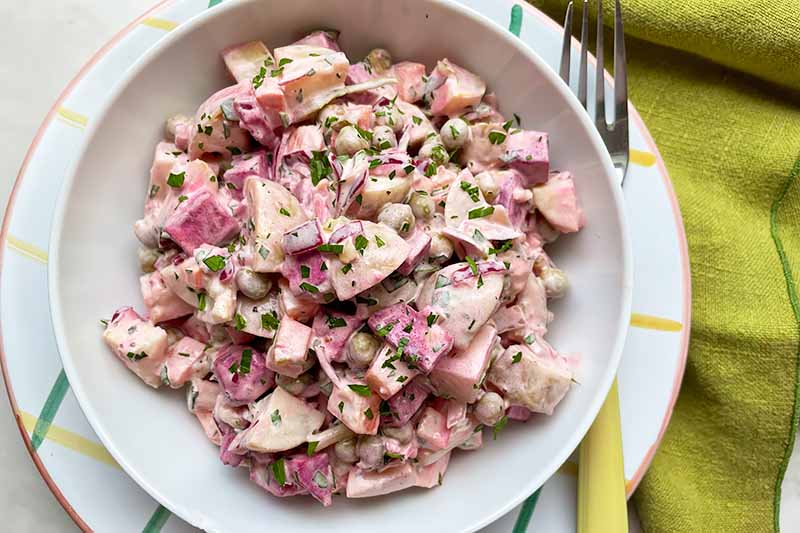 Cover and refrigerate the salad for at least 3 hours, or preferably overnight, to allow the flavors to meld.

Step 4 – Fold in the Beets and Serve

Just before serving, toss in the beets if you used red ones. Season to taste with additional salt and pepper if necessary, and garnish with parsley.

Serve chilled or at room temperature. Store in an airtight container in the fridge for up to 5 days.

If you’re a potato salad pro, you know already that one of the most important parts of making it is getting the potatoes to take on the right consistency during the cooking process. And the same goes for the other boiled ingredients in this recipe. 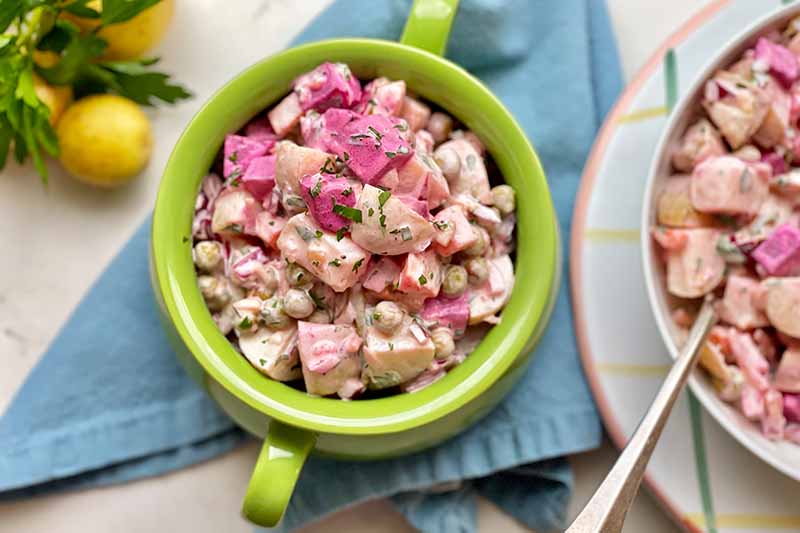 You want the beets, carrots, and those rich little Yukon Golds in particular, to have a tender-crisp texture, a firmness that holds up in a dressed salad, with a soft, delicate chew. Sturdy, but tender and cooked through.

My best advice? Don’t wander away from the pot, and do the knife piercing test often. Practice makes perfect potatoes. And that’s my kind of sports.

Although I opted for parsley in this variation, fresh dill is common in similar recipes, and it’s always welcome at any party alongside potatoes. Sometimes I sneak in chopped cucumbers for even more crunch.

What will you slide in to make this recipe your own? Share your ingredient ideas in the comments below! And don’t forget to give this recipe a five-star rating if you loved it.

If you’re on the hunt for more potato salads to be the star of your gathering, give these starchy recipes a shot next: 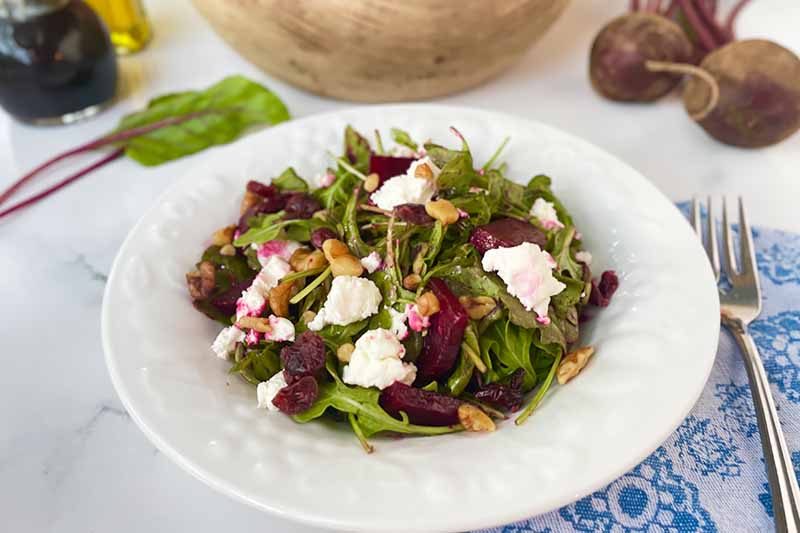 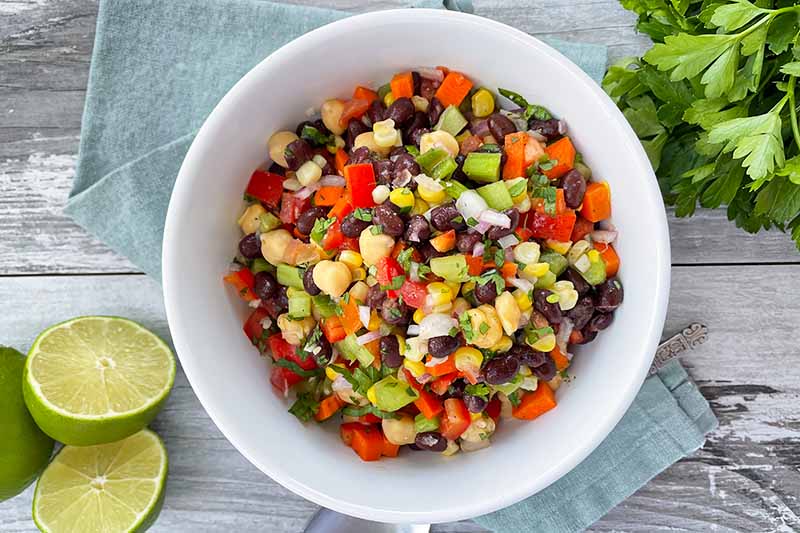 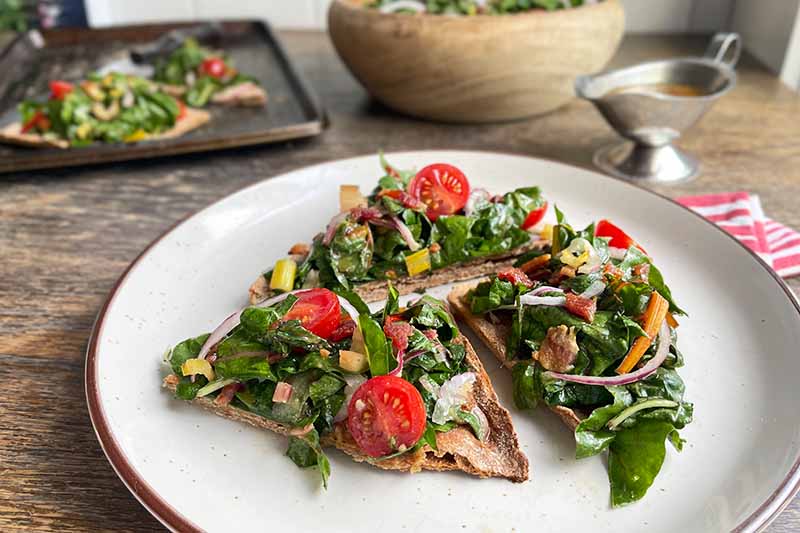