Bored with your regular potato salad? Want a a version that will knock your socks right off your feet and make your tongue leap right out of your head?

If so, check our our loaded version. Complete with feta cheese and BAAAACON! How does that sound to ya? 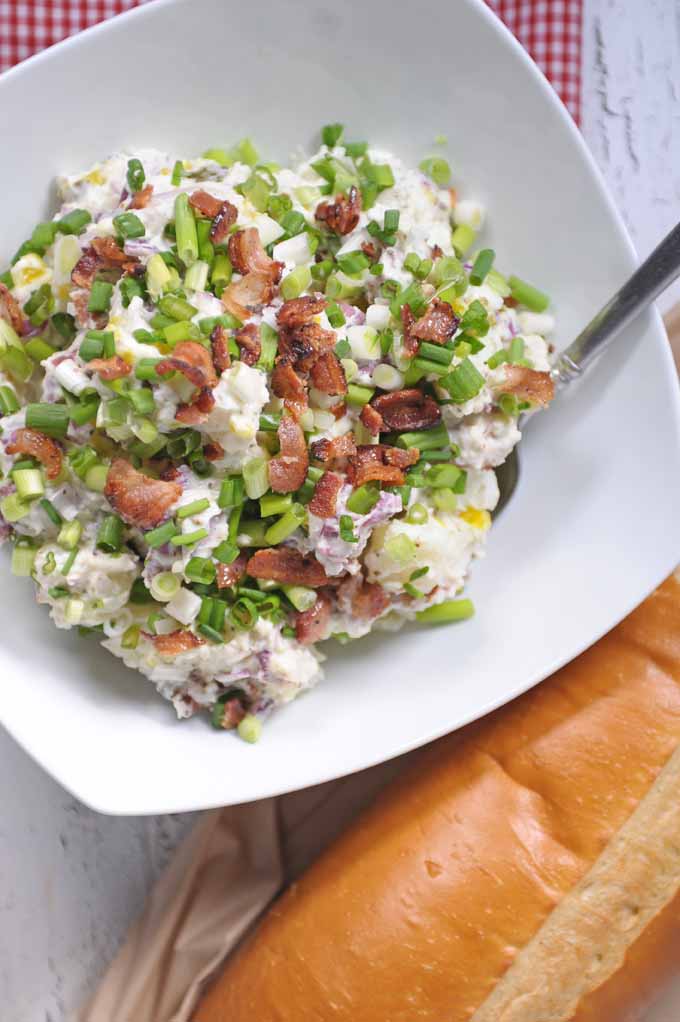 This version is good enough to serve as a stand alone meal, but will definitely be a huge hit at your next cookout or grilling festivity. It’s also great to pack in your picnic basket for those great outdoor activities.

And no, this is not a family secret passed down from 3x great-grandmothers ago to the first born and carefully guarded against recipe thieves, cowans, and eavesdroppers (I took a look at other potato salad recipes on the net and 80% claim that)! 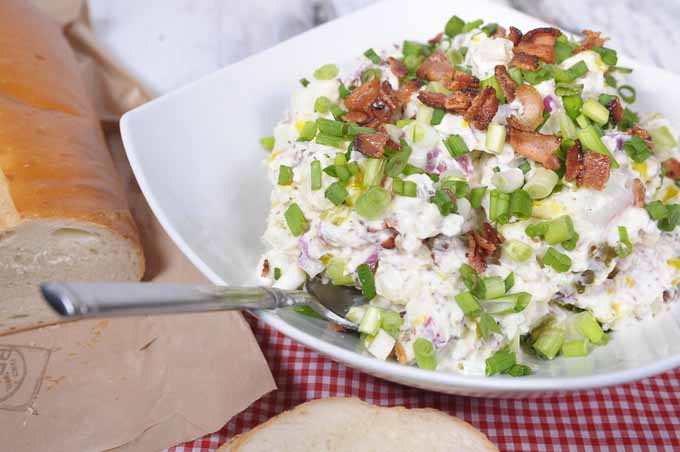 This is a variation that has been floating around for a while, and I have no idea who originally came up with it or even what the original list of ingredients were.

This is my version. 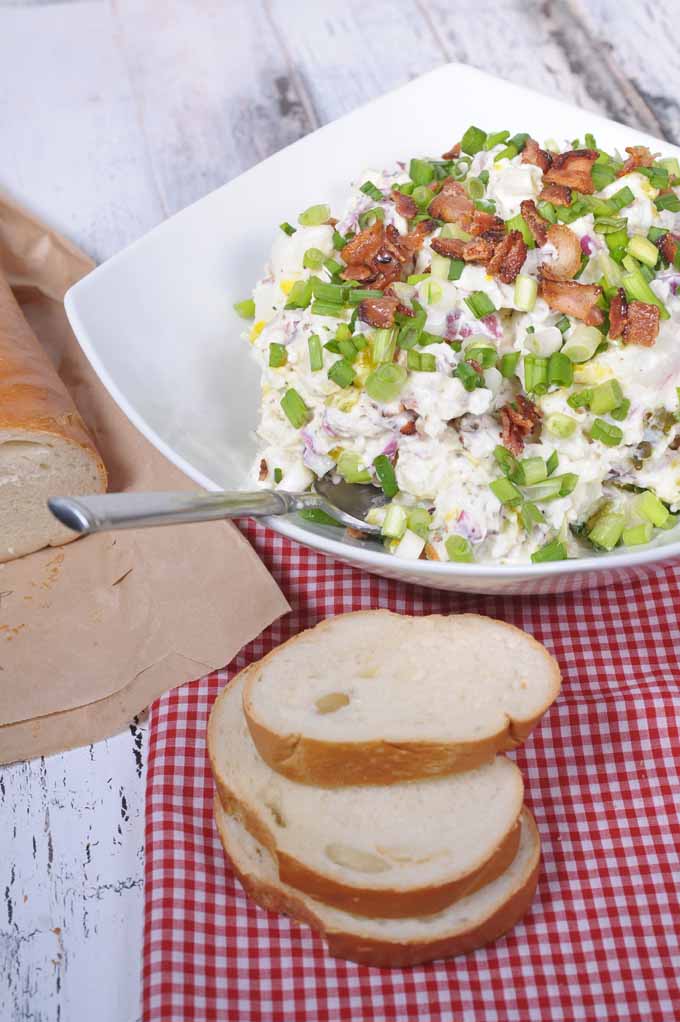 If you don’t like that ultra-strong sickly mayonnaise taste of your typical potato or egg salad (though we highly recommend making your own homemade mayo, to give it a chance!), or KFC-like gunky coleslaw, then rejoice. This has something better.

I used the light version, as I figure the copious amount of bacon included probably provides enough calories from fat. 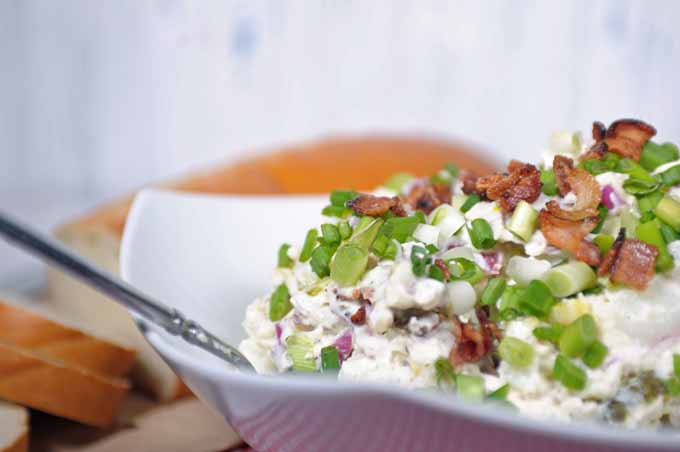 I like to use red potatoes for this for a couple of reasons. First, they are less starchy than your ordinary variety. Secondly, I like to leave the skins on. It keeps me from having to peel them, plus it adds a bit of color.

Keeping the skins on also leaves more of the vitamins and trace minerals intact. If I were to use another variety, I’d most likely peel them. Especially if they have any hint of green. Potatoes are part of the nightshade family and that green skin has a good dose of toxins that can make you sick. 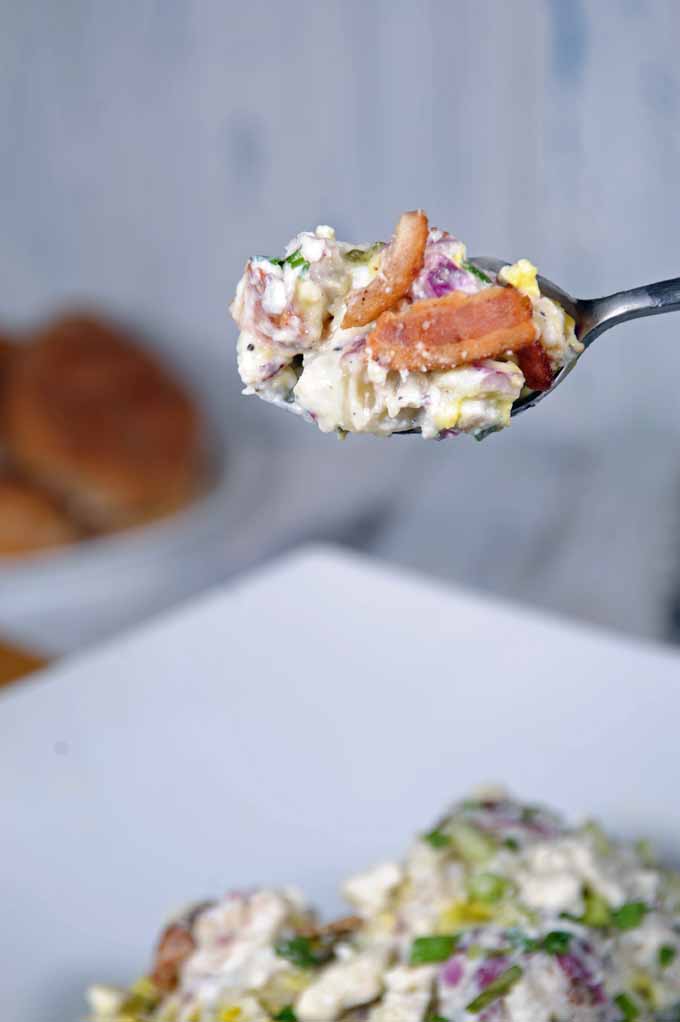 Same thing with the onions – use the purple variety. They add a hint of sweetness but most importantly they spruce up the eye appeal. 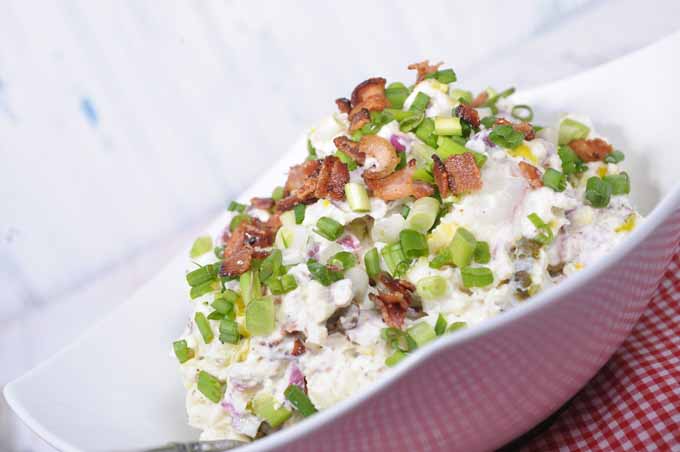 Bacon. Get some premium thick cut stuff. This ain’t the time to cheap out. It’s the star of the show!

I have no issue in claiming this is THE best potato recipe on the net. The only way to possibly make it any better would be to use fully leaded, premium, and 97 octane sour cream instead of the light stuff.

Be prepared for lots of recipe requests if you choose to serve it at your next get-together. 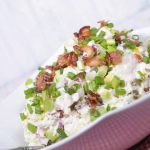 Cooking By The Numbers…

Step One – Prepare the Ingredients

Wash and cube up your potatoes in roughly 3/4″ pieces. Boil until tender but not falling-apart tender. Dump into a colander and drain well. Allow to cool. 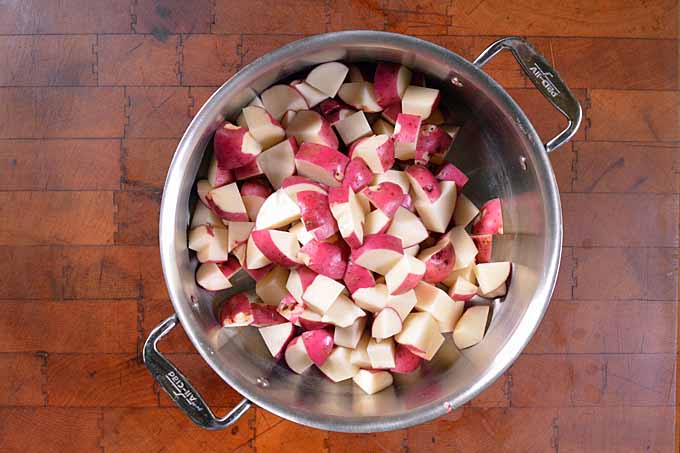 Cut the bacon into about one-inch pieces and fry until crispy. I’m using a carbon steel pan for this because I like the finish it leaves behind, plus they work like a treat on induction (that little burner below the skillet is a portable induction unit).

You can also cook the bacon in the oven, if you prefer a cleaner method of preparation. 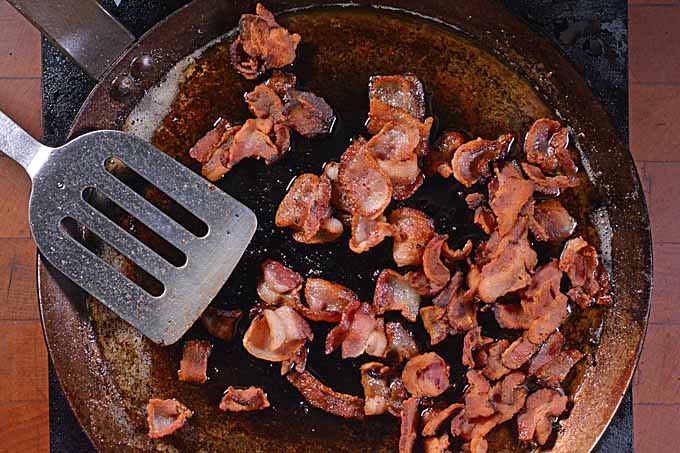 Slice the the green onions. And before anyone asks, that knife shown below is called a mezzaluna, which means “half moon” in Italian. They are great for dicing and chopping. 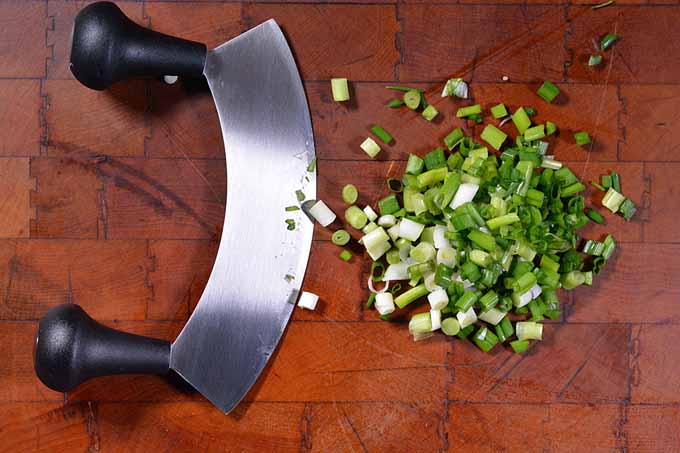 Dice your purple onions. I used a Shun Chinese cleaver for this, which I’m absolutely in love with. 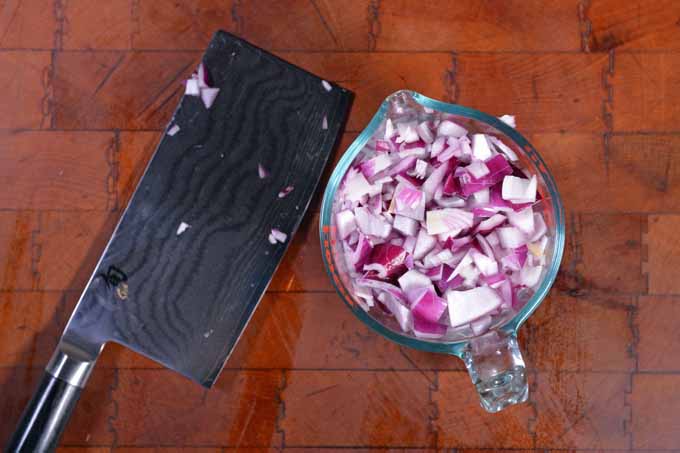 Dice your bread and butter pickles.

Mix everything together including the potatoes, light (or heavy depending on your preference) sour cream, purple onions, most of the bacon, bread and butter pickles, and feta cheese crumbles. Reserve about 1/3 of the bacon and all of the chopped green onions. 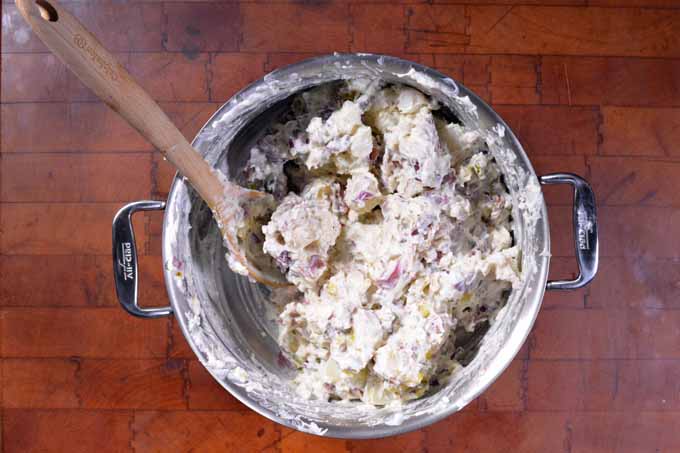 Scoop everything out into your serving dish and sprinkle on the remaining bacon and green onions. 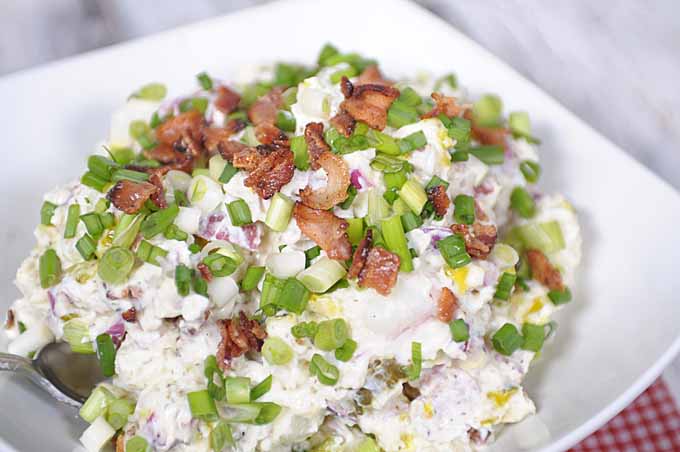 I don’t know about you, but I’m getting hungry just looking at the pictures! Make this and you won’t ever go back to ordinary potato salad again. 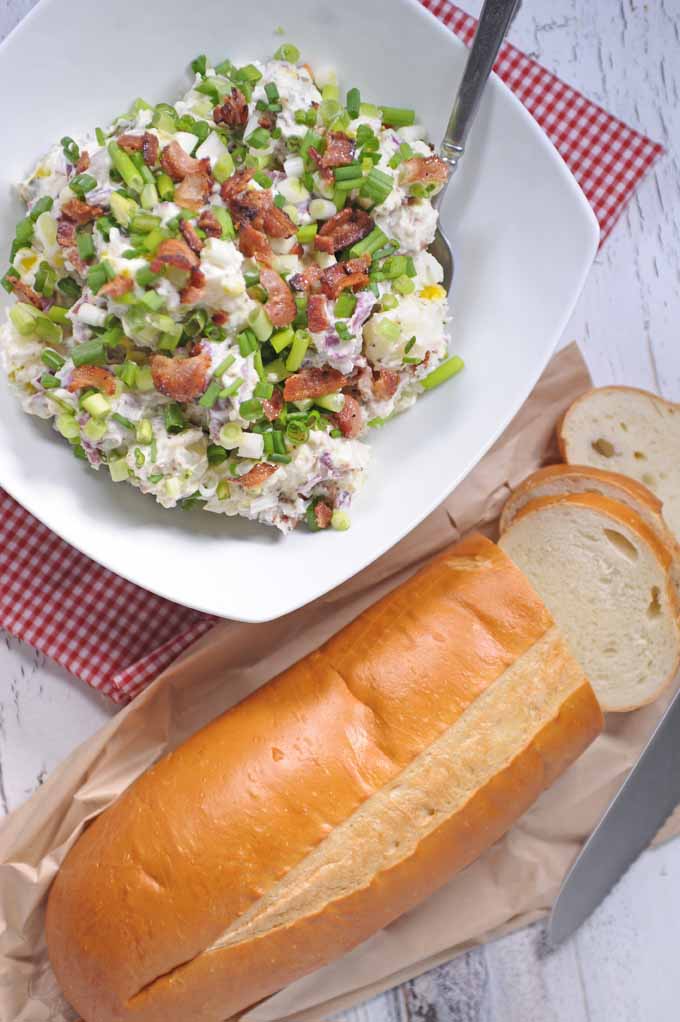 We ain’t a one trick rabbit here at Foodal. For other variation, be sure to take a look at some of our personal favorites:

They’re sure to be better than your ordinary mayonnaise-soaked affair (or fare? Is this a pun?).

If you’re hankering for another spud-forward recipe with and Italian twist, take time to make our potato gnocchi recipe at home.

What about you? What’s your favorite potato salad variation? Be sure to let us and the community know in the comments below! 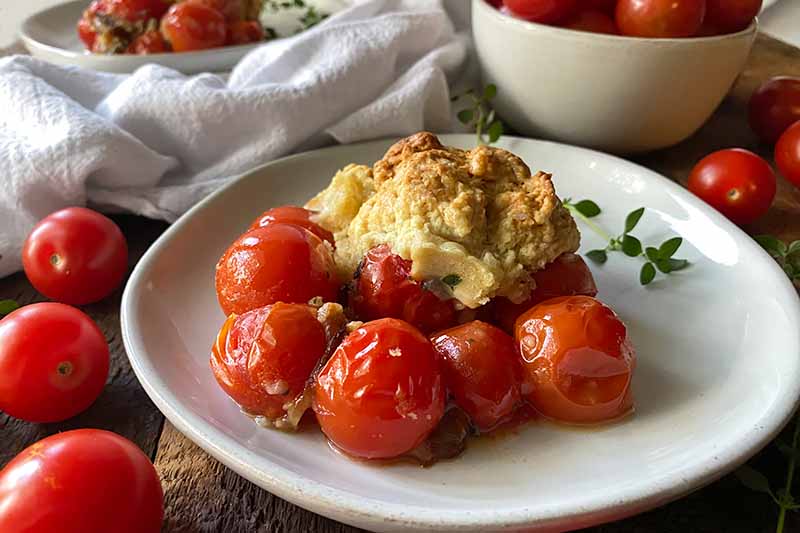 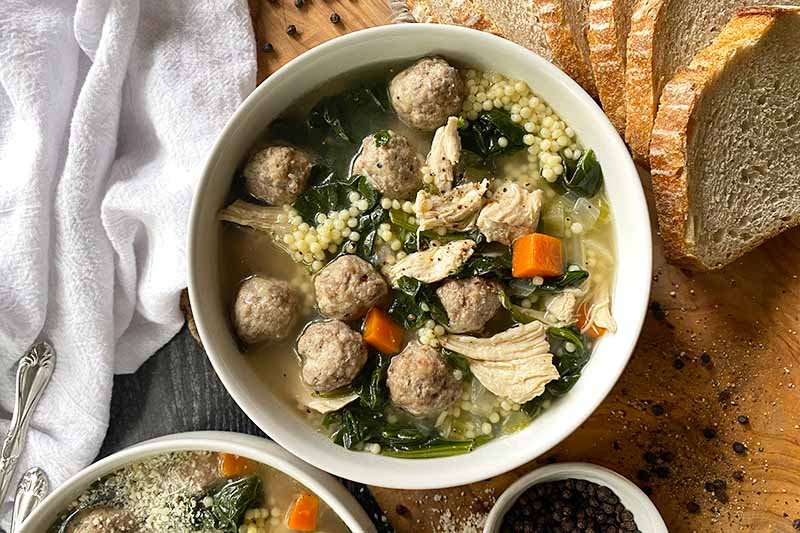 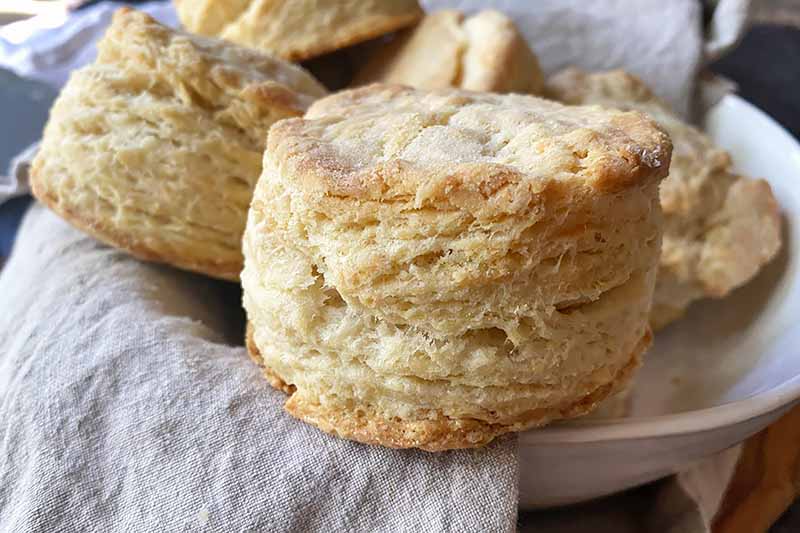