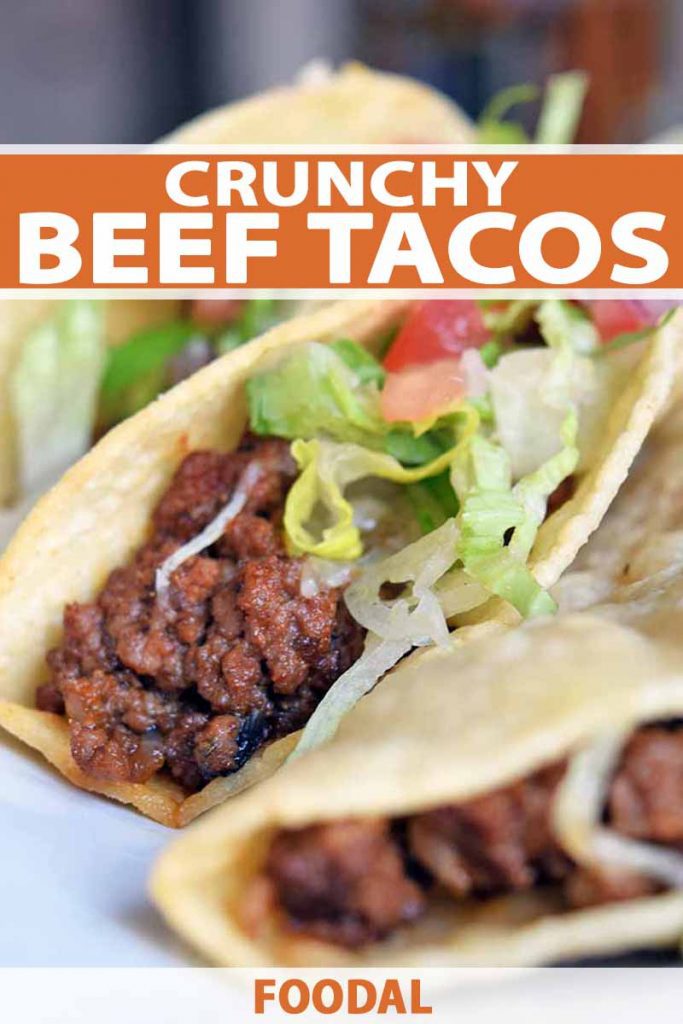 That moment in the grocery store when you’re debating between selecting fresh ingredients and actually cooking dinner, versus buying the beloved boxed version of whatever entree you’ve got on the brain… 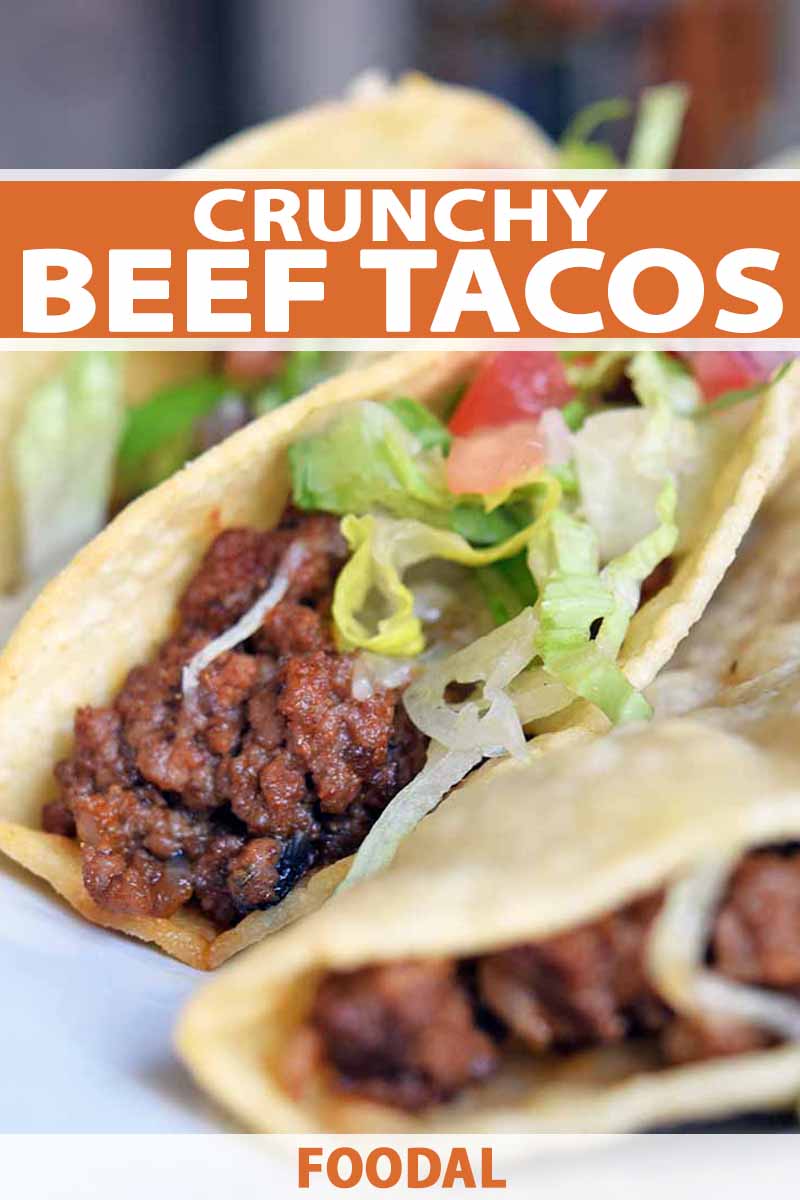 It’s an easy trap to slip into, especially when the idea of a from-scratch meal seems daunting. But trust me when I tell you – skip the kit. 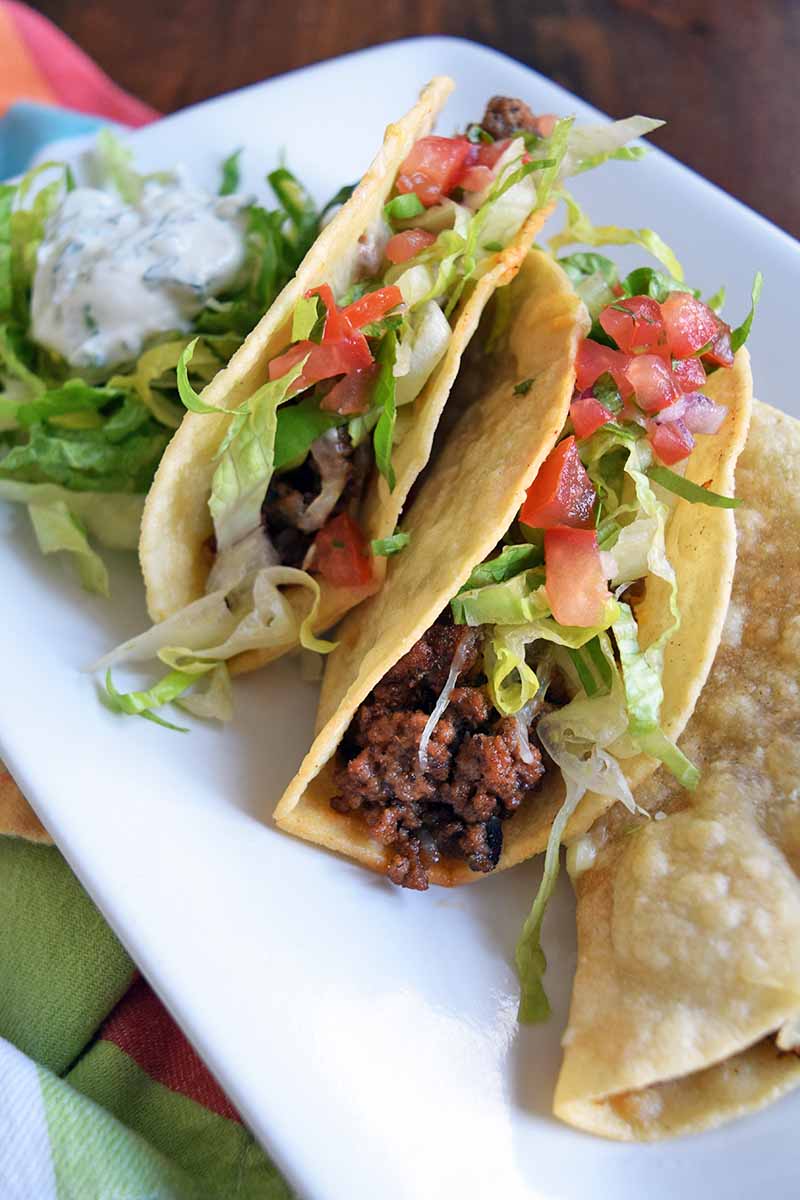 When taco o’clock hits, this is the kind of craving-satisfying meal you want to make yourself, from top to bottom. You already have to accomplish browning the ground beef (can’t get that in a box, bro), so take the extra step to sprinkle it with some homemade love.

I keep my kitchen predominantly stocked with fresh herbs, but there are certain (taco-shaped) things that simply call for dried spices that you probably already have on your rack. I don’t feel the need to “fancy up” or slap a bowtie on my signature taco seasoning.

I’ll add fresh, pungent flavors like minced garlic to whatever protein I’m stuffing in the tortilla, but for the spice mix itself, I go ground or go home.

Actually, I’m already home when I’m making this. You know what I mean… 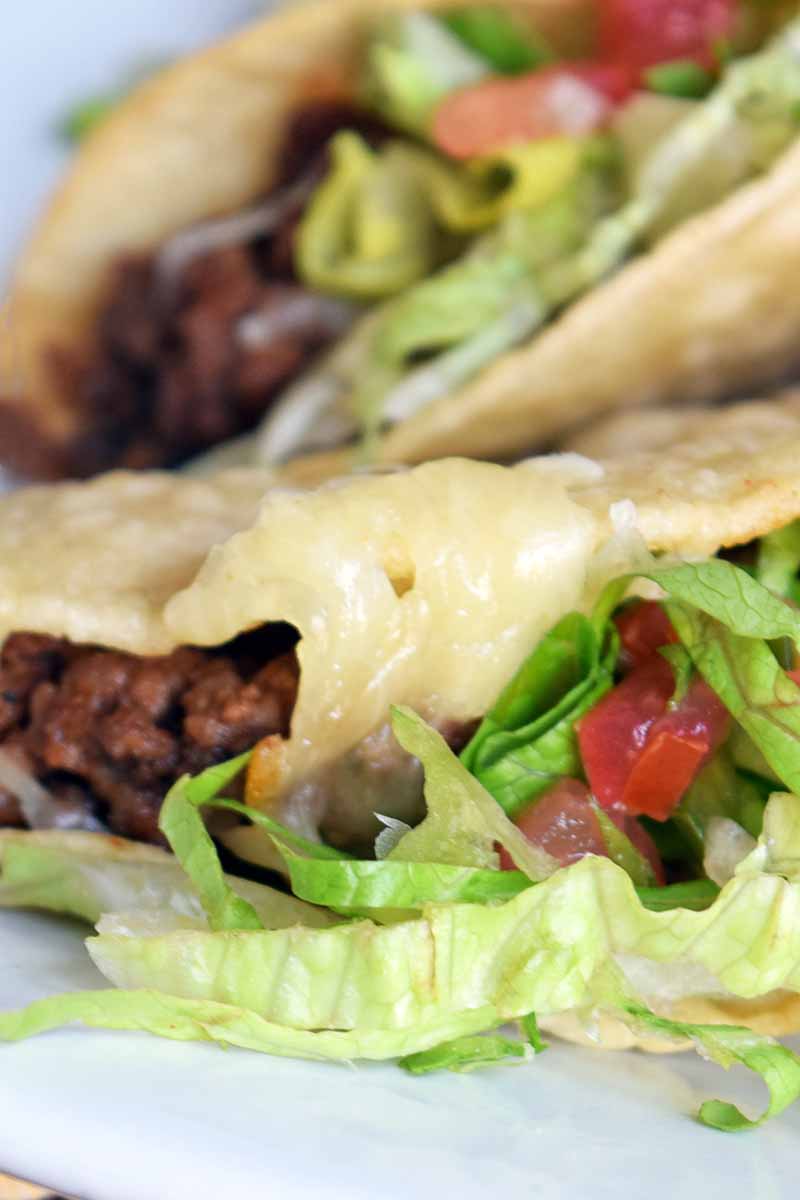 This taco seasoning mimics what’s in that packet that you’ll find in most grocery stores, with the exception of several elements: this one isn’t loaded with sodium, and you can control every factor of flavor.

Keep in mind that I use a combination of chili powder, which is already a blend of various herbs and spices, plus additional spice rack favorites to beef it up (pun so intended here). Don’t reach for 4 tablespoons of straight-up cayenne when you make this, or you’ll be in for a super spicy surprise!

If you can’t get enough heat, feel free to give it a kick with some extra cayenne. If you find smoky notes overwhelming, hold your horses on the cumin.

These savory spices intensify the beef with such an oomph of flavor, you could fold up this filling as-is and call it a day. But I like to go one step further by also frying my own tortillas to make those classic hard shells.

I’m not going to judge you if you reach for pre-packaged crunchy taco shells instead. But when you see how easy it is to transform corn rounds into corn envelopes, you might rethink things. 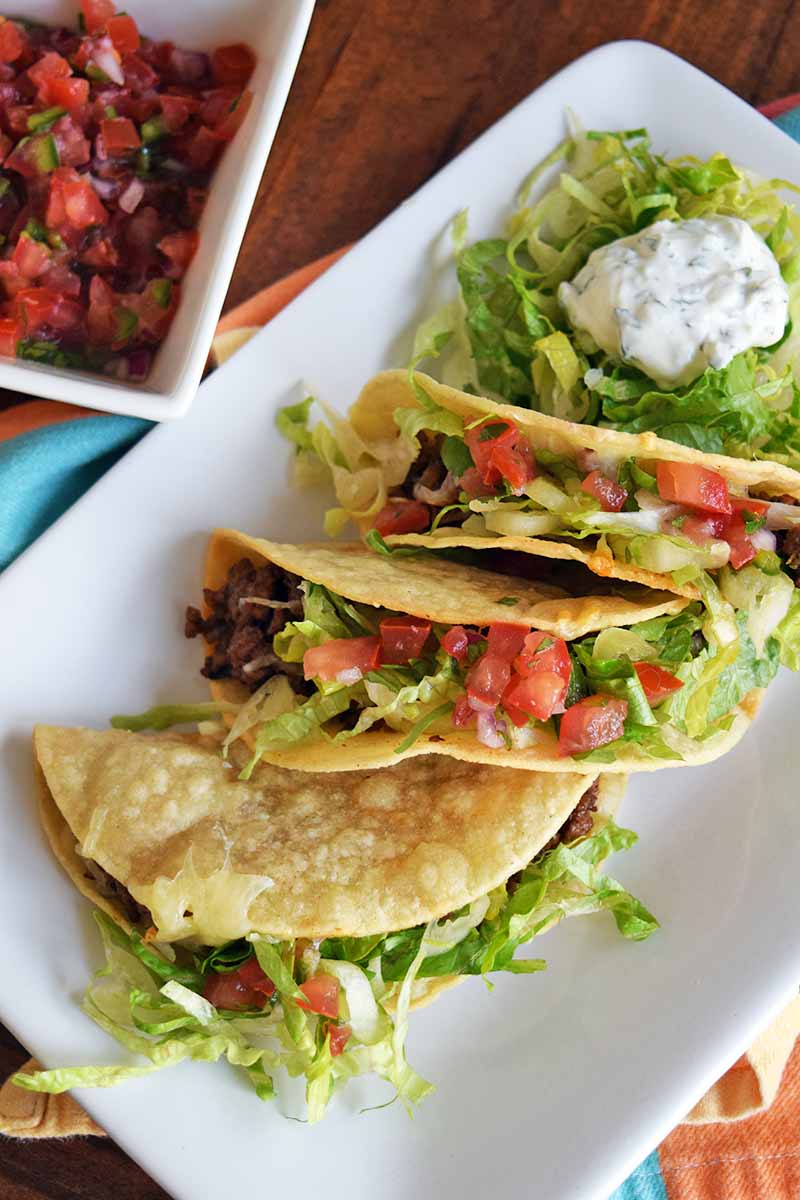 Another rock star move (that’s actually a built-in step of frying at home) is that you’re given the very first opportunity to season your taco vehicles.

Think of it like this: when you get out of the shower, your pores are wide open. There’s literally no better time to slather on moisturizer, because it instantly clings to your skin.

When you extract these delicately fried-and-folded corn tortillas out of the oil, they’re in their optimal state to soak up flavor. You can slap them with some coarse salt, or go a step further and dust them in your taco spices for a double layer of yum. 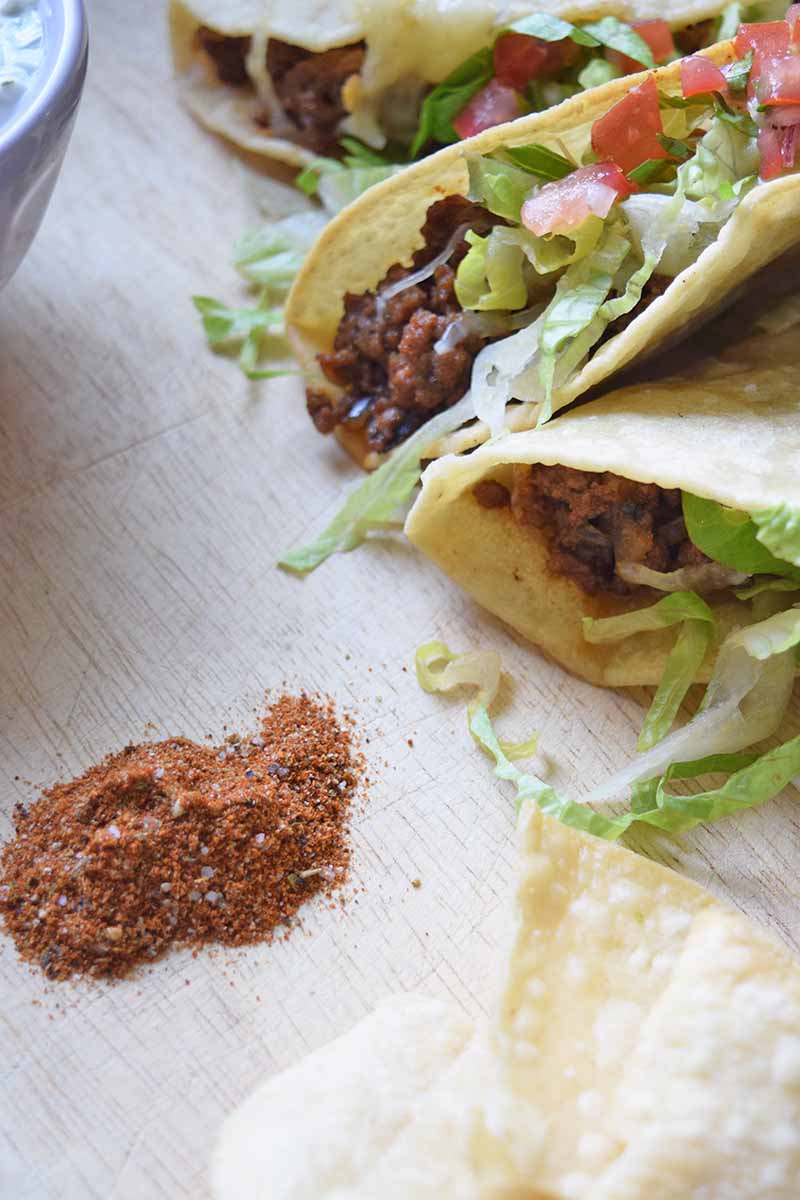 Want to go all Taco Bell Doritos Locos copycat and throw some bell pepper powder and some cheese powder and whatnot in there? If you’re ready to reverse engineer the brilliance of that particular variety of uber-popular taco shell, be my guest!

Did I just relate taking a shower to seasoning taco shells? Oh yes, I did. 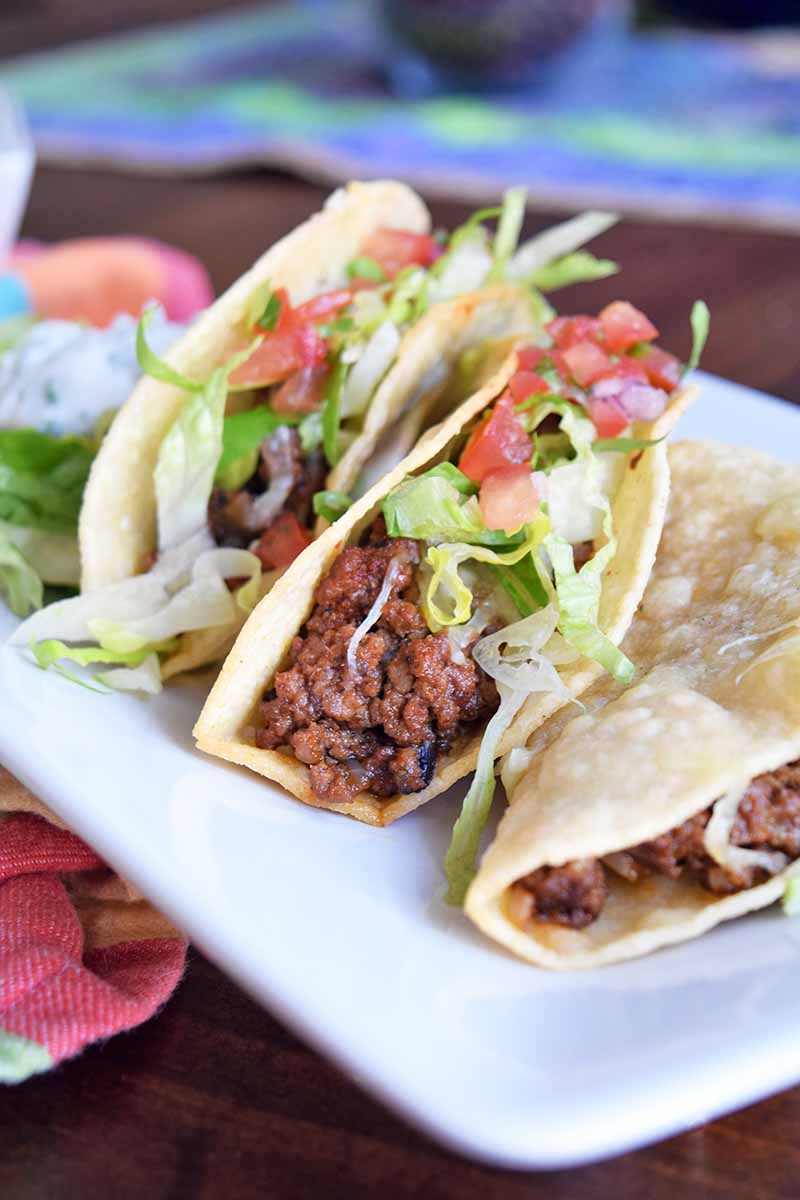 As far as toppings go, this is truly the part where “to each his own” comes in.

When I was little, my dad would assemble a weekly taco night meal for me and my friends. When I think back on those melted cheese memories, my most prominent visual is the bowls.

My dad would thoughtfully dice tomatoes, shred chilled romaine lettuce, and scoop sour cream into ramekins so that everyone could dress their tacos accordingly, to their personal delight. 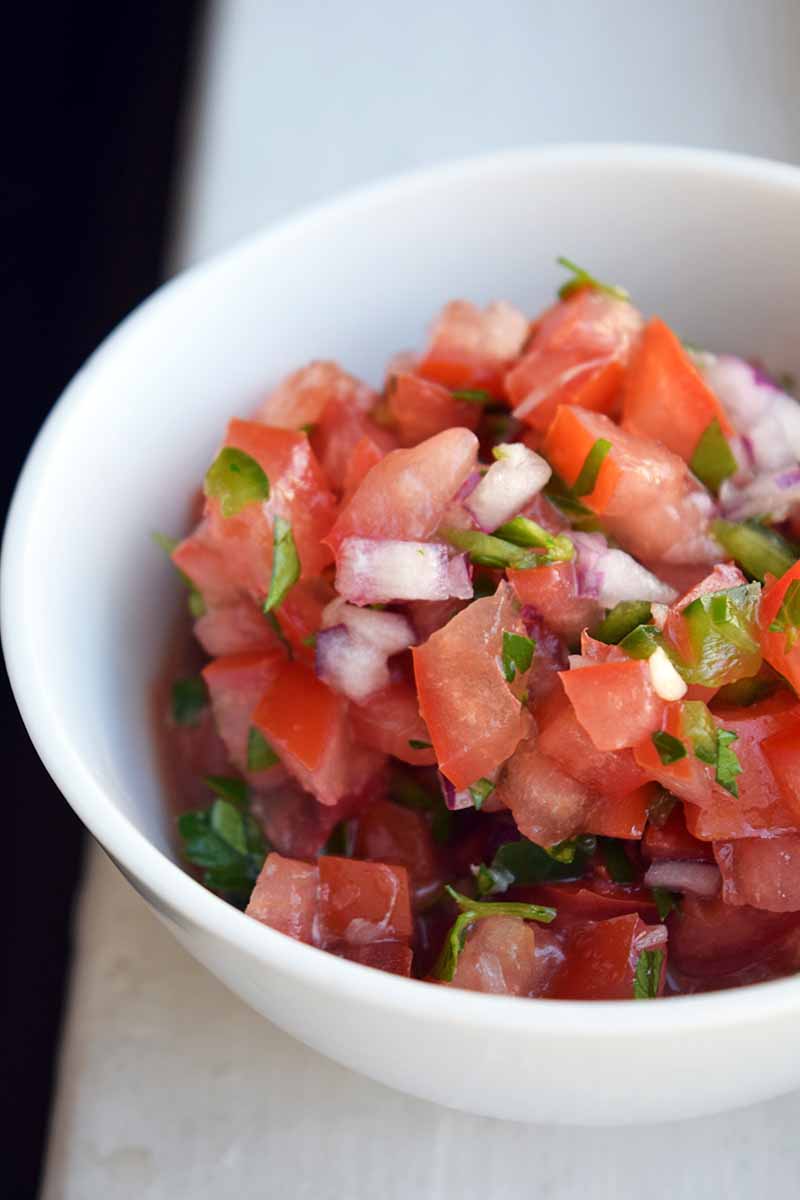 Today, I like to up my toppings game a touch. I strongly suggest at least raising the stakes when it comes to the cheese. Steer clear of the pre-shredded yellow bagged stuff, grab yourself a block of quality sharp white cheddar or creamy jack, and get to grating.

A thin zig-zag of cool, slightly tangy sour cream will achieve that refreshing note the fatty beef calls for – but if you’re in the mood to show off, whisk up a fresh green onion and cilantro crema. The gentle garlicky notes of scallion bring out the red onion flavor in the beef, and people will be impressed that you used the word “crema.”

You could easily twist the top off a salsa jar, but you’ve already gone to the trouble of mixing your own spices. Might as well whip up some citrusy pico de gallo… 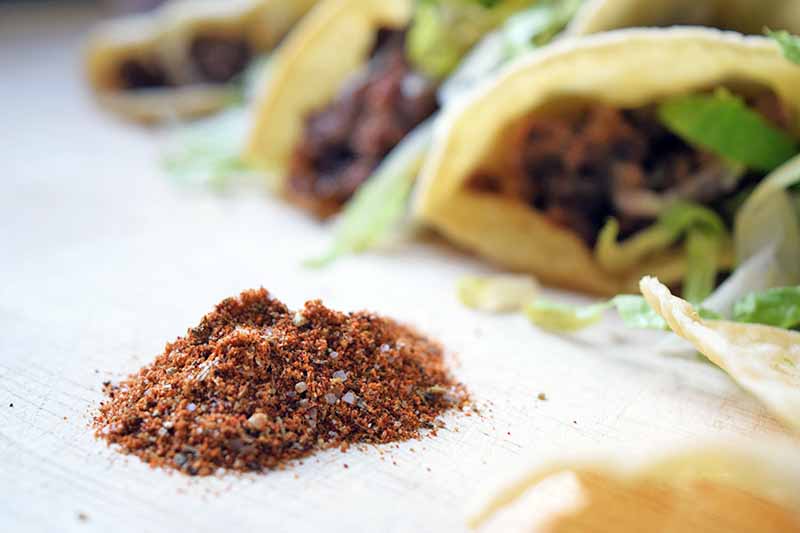 However much you think you’ll need, make double. This addictively fresh condiment (exploding with lime and crunchy jalapeno) pairs with everything.

Now that you’re armed with a few scratch-made secrets to give classic crunchy beef tacos the simple, yet glorious makeover they deserve, you can skip the kit.

And stand back for the applause. 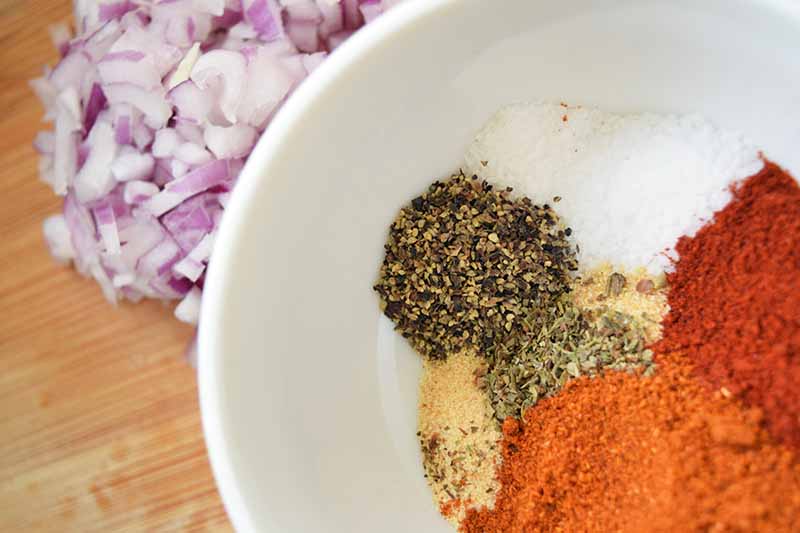 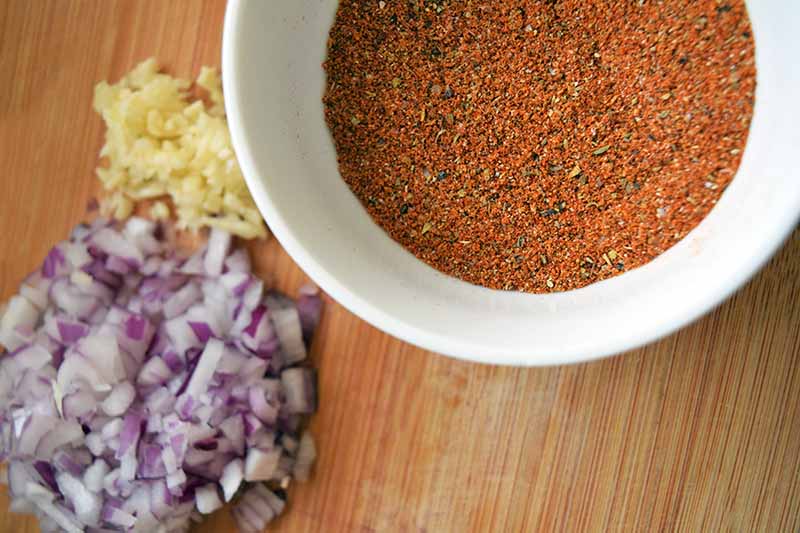 You will have extra taco seasoning mix left over, so save it in your spice rack for use in other recipes, or pull it out when you want to make this delicious meal again.

Dice the red onions and mince the garlic.

Measure out all of the remaining ingredients, so they will be ready to go.

In a large cast iron skillet or saute pan, heat a tablespoon or two of vegetable oil and add the ground beef. 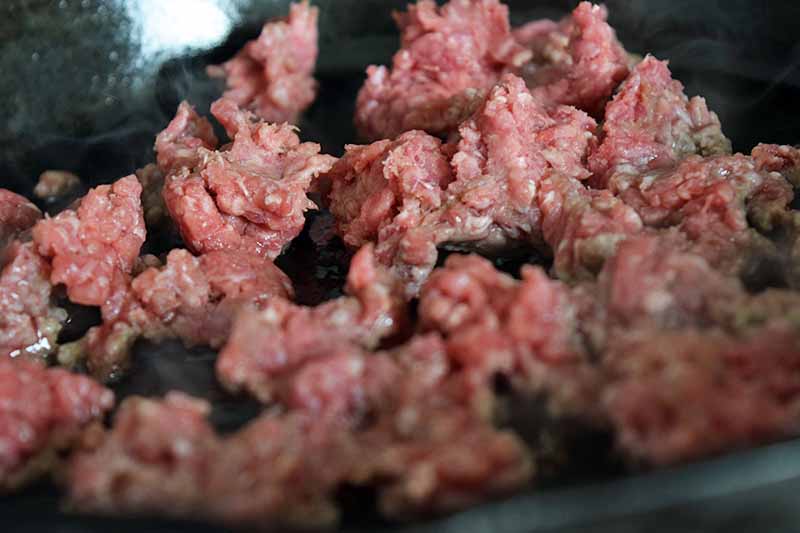 Season with salt and pepper and use a slotted spoon to break up the mixture. Saute until lightly browned, and then reduce the heat. 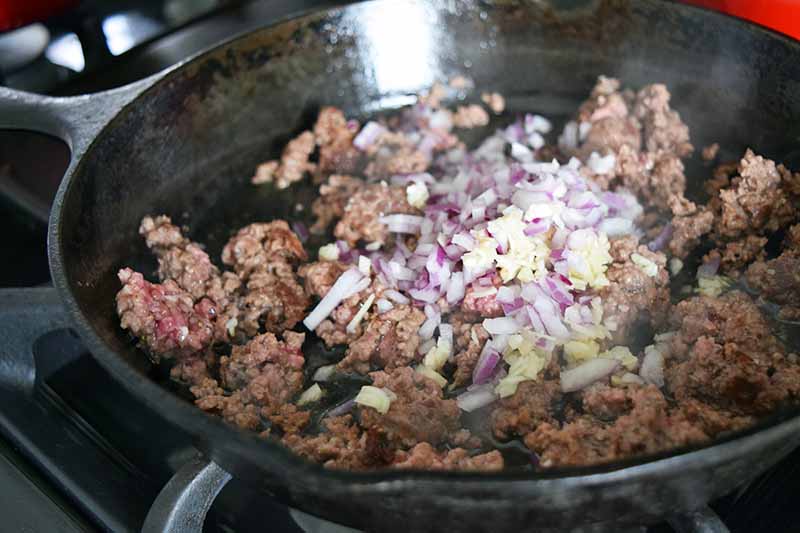 Add the red onions and minced garlic, and generously season the beef mixture with the taco seasoning. 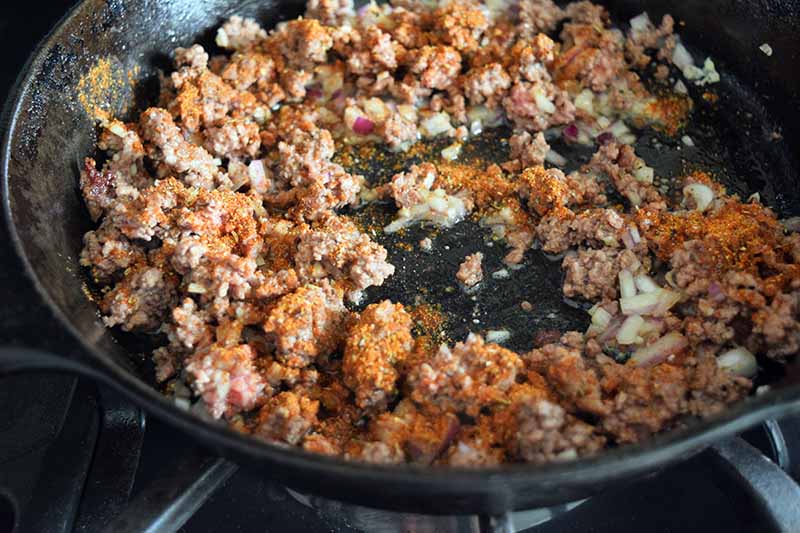 Saute for several more minutes so that the flavors can meld with the meat. 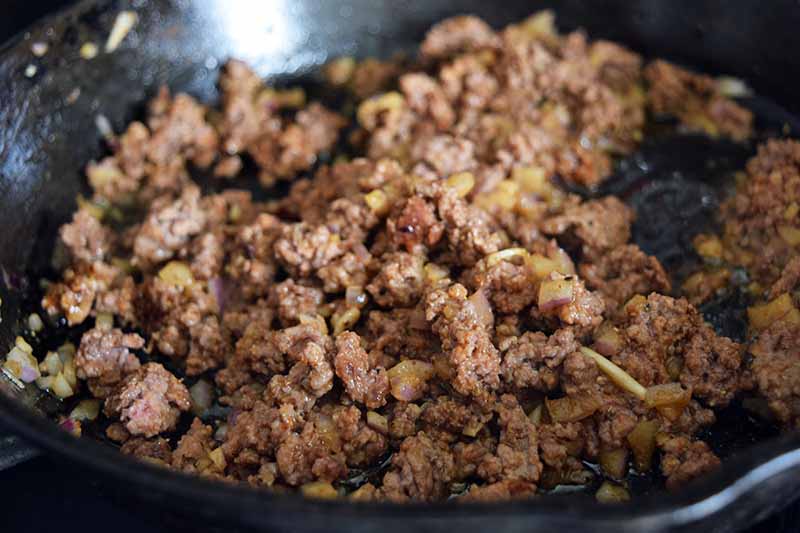 Taste for additional seasoning, and keep the beef mixture on low heat.

In a heavy-bottomed skillet, heat about 1 inch of the vegetable oil over medium-high heat. If you’re using a thermometer, the optimal temperature of the oil should be 360°F, but anywhere in the 350-375°F range is fine. 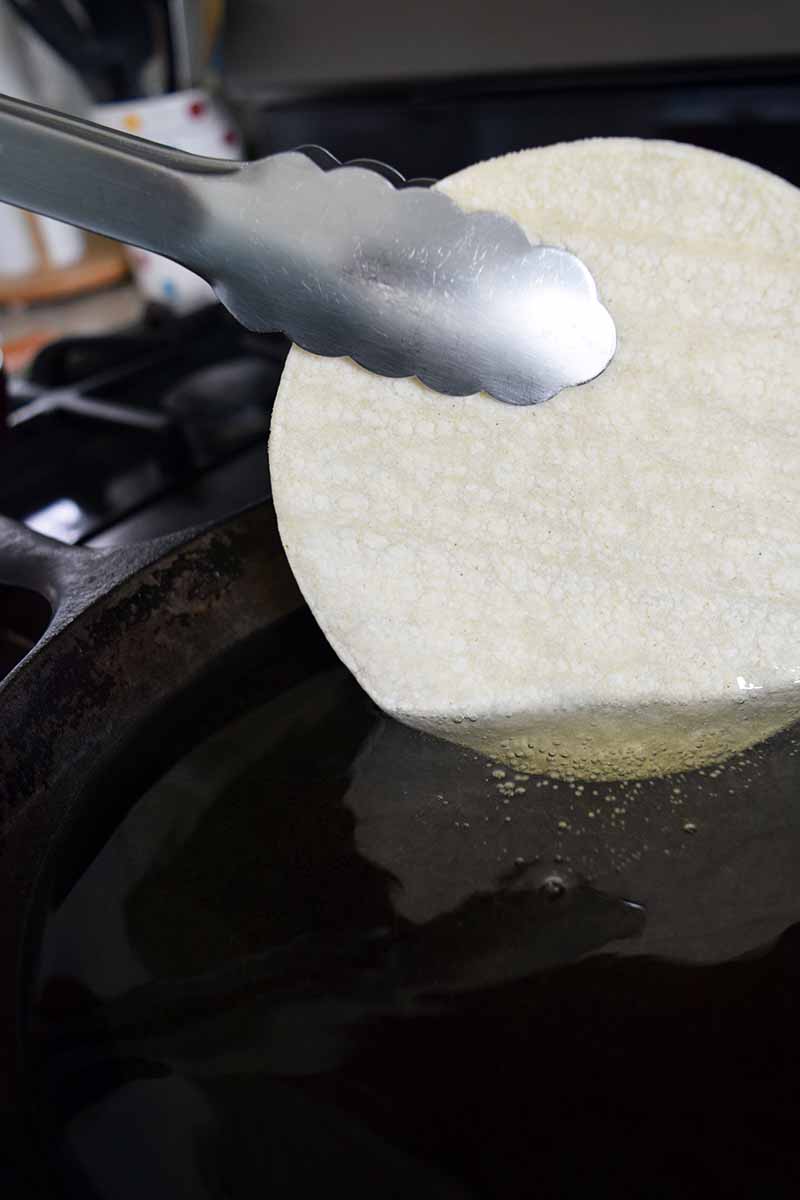 If you don’t have a thermometer, you can tell when the oil is ready by slowly dipping in an edge of one of the tortillas. If the oil immediately bubbles around the tortilla, it’s hot enough. 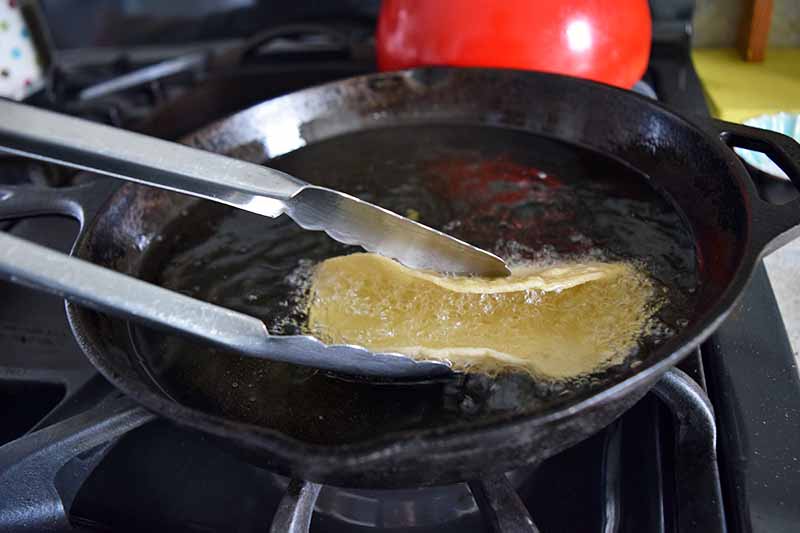 Using tongs, carefully drop one tortilla at a time into the oil. It will puff up and bubble. Let it sizzle for about 15 seconds, pushing it back into the oil when it floats to the top. 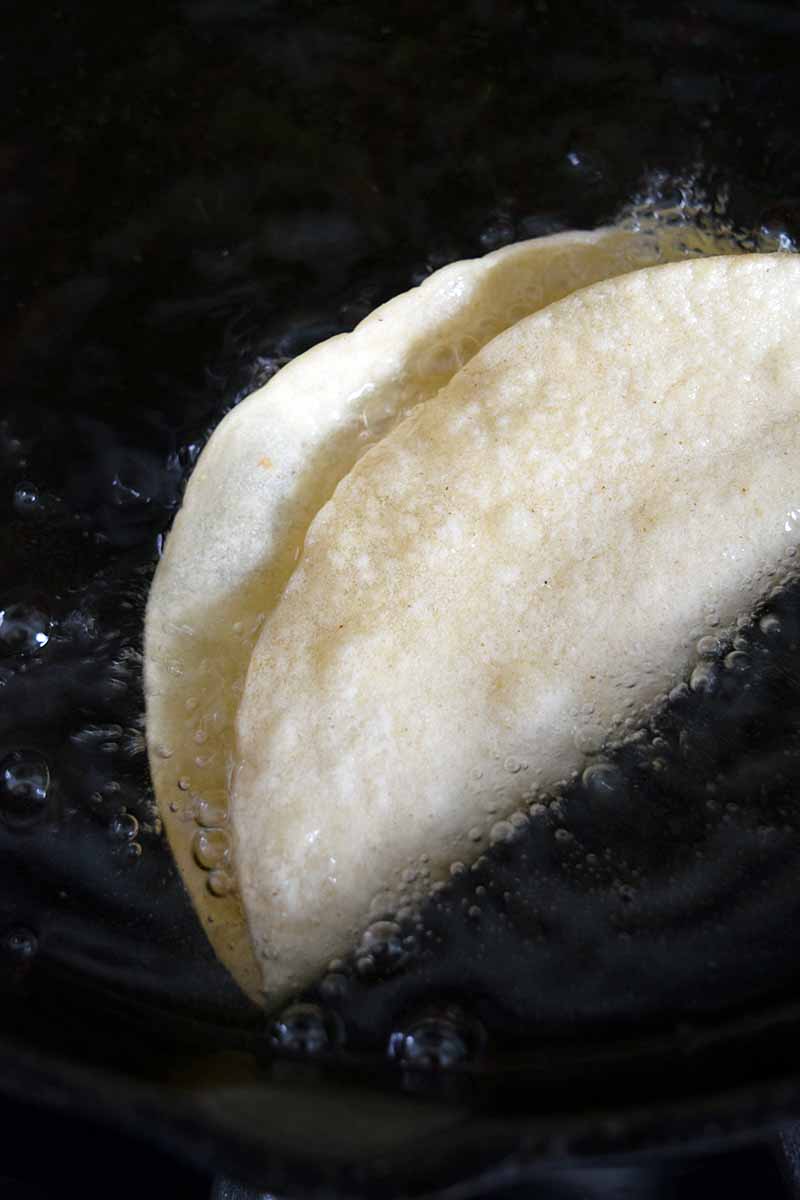 Flip it over, fold the tortilla in half to create a shell, and hold it in place with the tongs to make sure that it’s being evenly submerged in the oil. 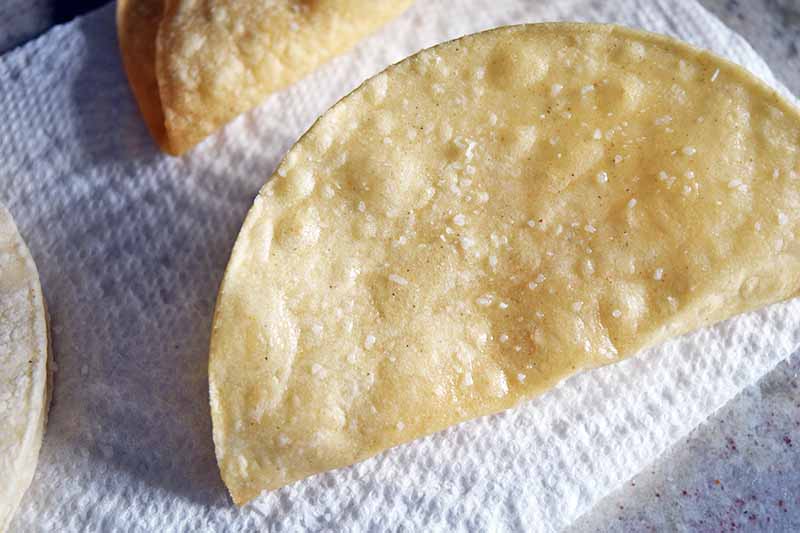 When it’s very lightly golden, place the fried shell on a paper towel to drain, and sprinkle with salt or additional taco seasoning. 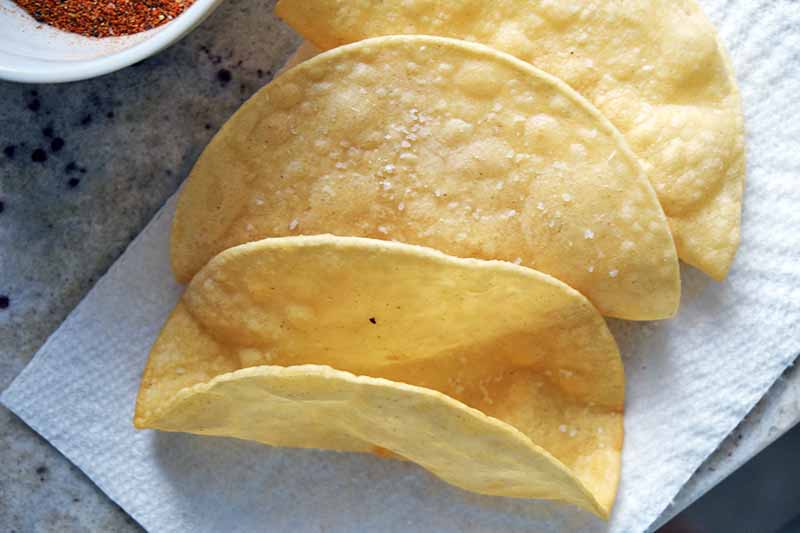 Repeat with the remaining tortillas, one at a time. 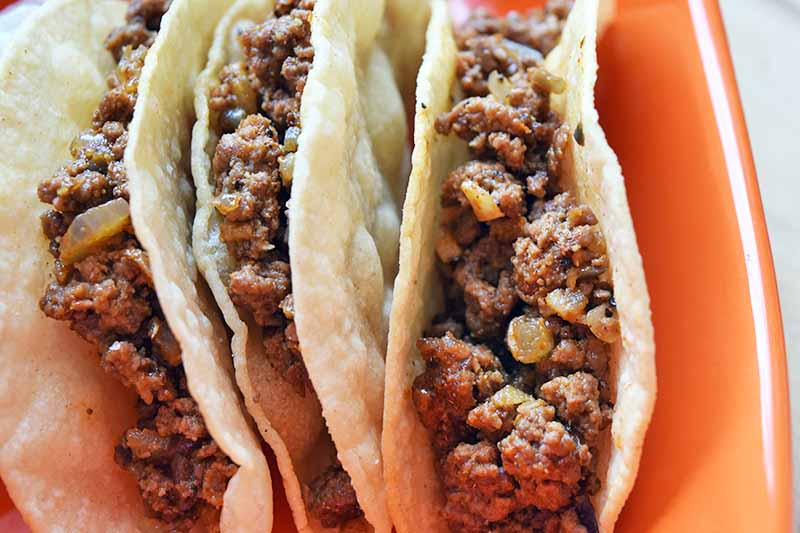 In a deep baking dish, arrange the freshly fried taco shells so they stand upright. Evenly divide the beef mixture among the shells, and then top with the shredded cheese. Bake until the cheese is bubbly and melted. 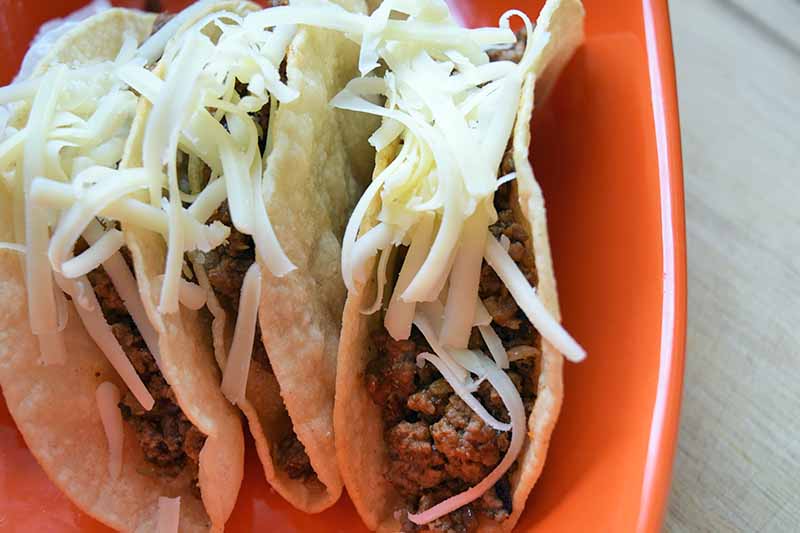 Garnish with assorted toppings of your choice.

You’d better believe you’ll want to double (or triple) up on the quantity of this taco seasoning, to have it on hand at all times.

This snappy, smoky, versatile mix can be sprinkled over everything from cheesy scrambled eggs that need a bold boost to any other protein you want to slip into a tortilla shell.

I also hang onto extra corn tortillas (popping them in the freezer for safe keeping) because nothing beats freshly fried chips dunked into, well, pretty much anything. For a quick crispy salad (or soup) topping, slice them into thin strips, and bake or fry until golden. While they’re still hot, shower them with the taco seasoning and a few tart pinches of lime zest. 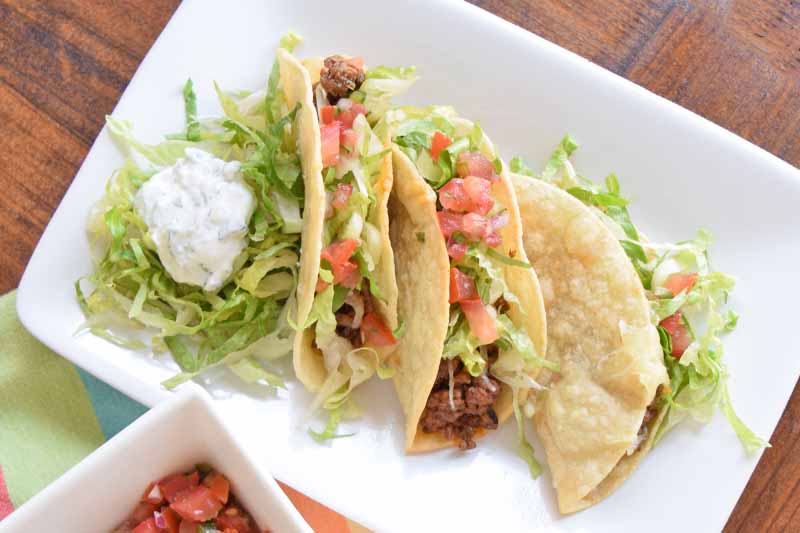 For more inspired twists on the traditional taco, check out these inventive handhelds:

And don’t worry if your taco shells break or shatter. Be inspired by our chicken chilaquiles, and toss the pieces together with your meat and sauce in a large pan!

What creative condiments do you put on your taco bar? Charred corn? Pickled veggies? Share your go-to garnishes in the comments below! And don’t forget to give this recipe a five-star rating if you loved it. 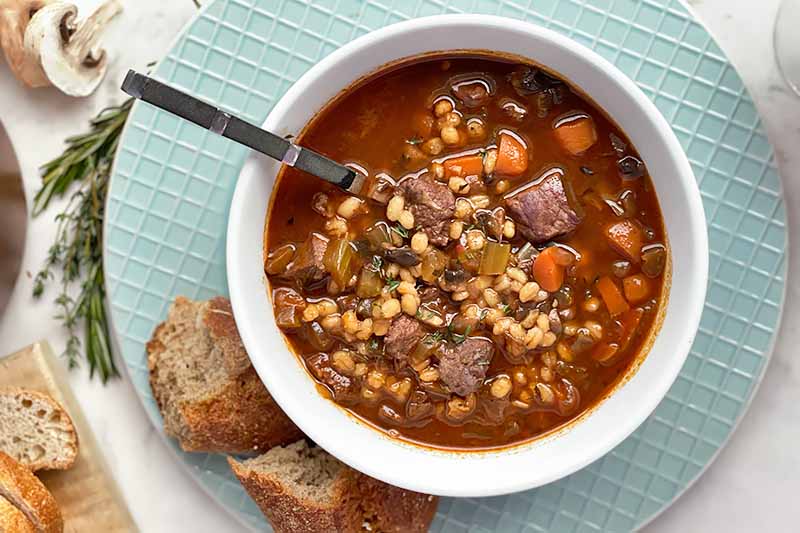 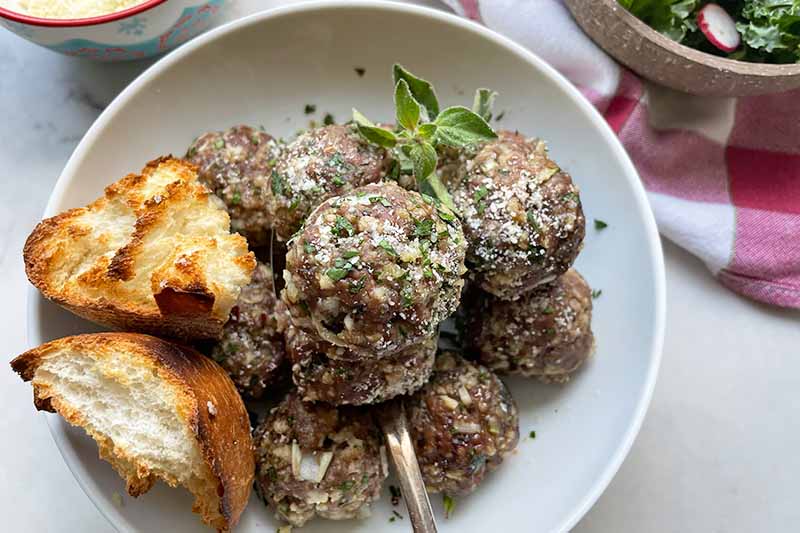