When Tim makes Italian-style green beans, he thinks of his grandma Emily, a beautiful Italian woman with short white hair and smiling blue eyes, who still explains recipes with a flick of her wrist and an “Oh, it’s so simple!” When I make Italian-style green beans, I think of Tim, the man who brought them, along with avocados and perfect grilled cheese sandwiches and raw milk bought straight from the farmer, into my life three years ago. 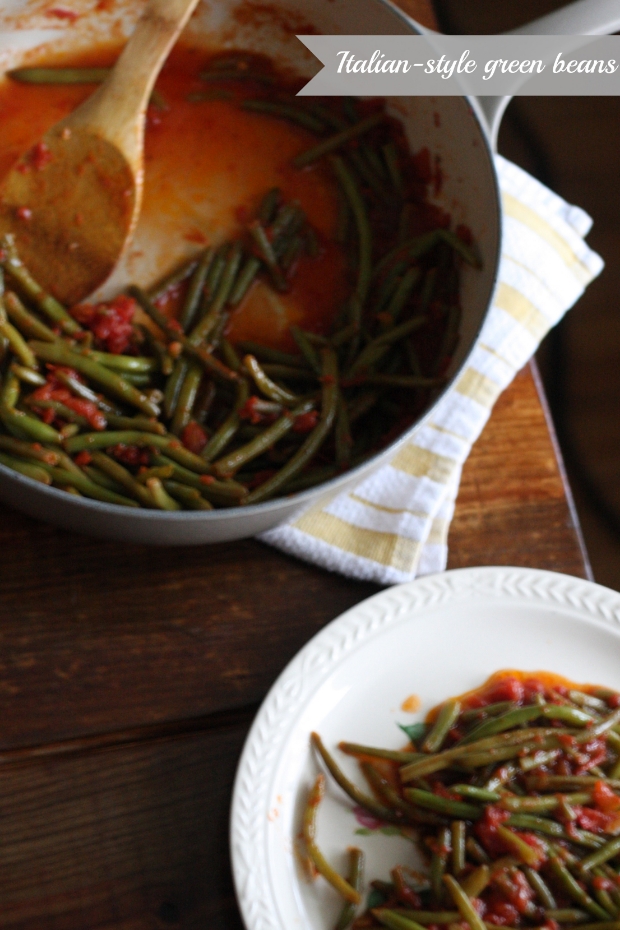 Although we met in person one long January afternoon in 2010 and began visiting each other’s towns every month shortly thereafter, Tim and I grew to know each other over a full year of long-distance conversation, the kind that happens on the phone and over email, alongside Twitter updates and photos posted to Instagram. We’d already been talking a few months when he posted a picture of this particular dinner on social media one night, a plate piled so high with green beans and sauce, you’d think it was the side dish at a dinner party for four, rather than the happy, hearty dinner of one 20-something-year-old man. 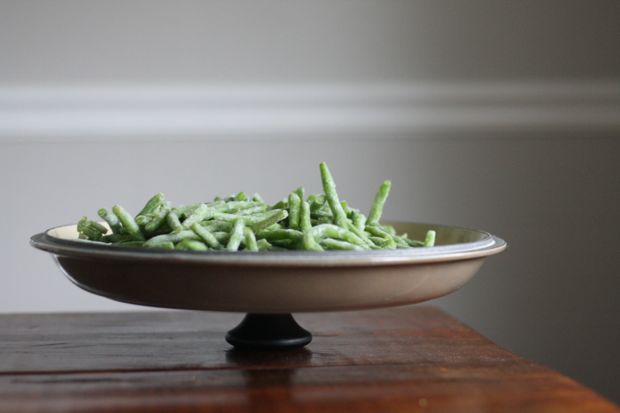 “Yeah, I like green beans, too,” I remember telling him on the phone, categorizing vegetables into levels of like and dislike, cabbage being on the low end and green beans being high. “I think they’re probably the vegetable I like best.”

That statement came from a perspective not unlike most people’s in America, I think—or, at least, not too different from the people I knew or watched on TV. I’d grown up in a family that ate green beans, boiled, the way we ate carrots or peas, alongside mashed potatoes and chicken dinners. Sometimes my mom toasted slivered almonds to place on top, and there was a green bean casserole at every Thanksgiving meal. Years later, as an adult, in my early-blogging days, I’d been adventurous enough to roast green beans in high heat and cover them with lemon juice, marveling at the blistered, crunchy results.

But here is the way Tim likes green beans best, the way he grew up eating them in a childhood five hours east of mine: Italian-style, soft and wilty, submerged in chopped tomatoes and infused with garlicky oil, the way his mom made them, the way her mom made them before her. 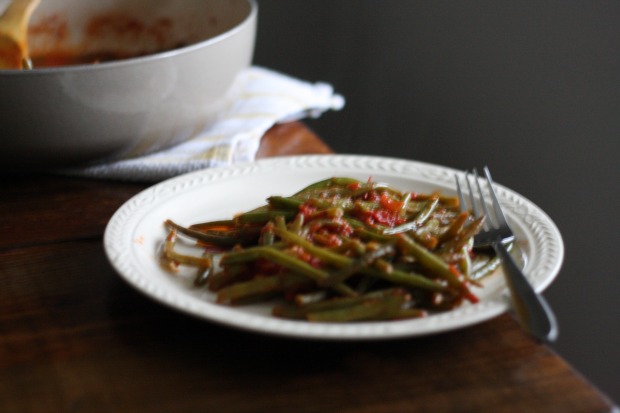 Tim first made Italian green beans like this for me after I moved to Nashville, in those beginning months where we lived 20 minutes, instead of eight hours, away from each other, and could make dinner together every night. While most nights we worked side-by-side, Tim chopping vegetables while I worked over the stove, the night we had green beans, he did all the work. I remember a large, deep skillet on his stove and the smell of cooking garlic floating strong from the kitchen to the living room. I remember waiting a while. Mostly, I remember eating a full plate of them myself, alongside toast if I remember correctly, thinking this man sitting next to me was full of information and surprises and that he was someone from whom I wanted to learn.

To people who knew me before I knew Tim, the way my life has gone the last three years has sometimes seemed like a whirlwind of new things, and, in fact, some loving friends even wondered, at least in the beginning, if this new man in my life might be changing things too much. It’s a hard thing to explain, to people who aren’t changing with you when you switch something obvious, be it career or location or school or clothing choices, that in some ways we are all, always, changing, and so even though a certain change seems Big, it’s necessary. In life, there are big steps like moving to Nashville, which I took exactly two years ago today, and then there are small steps, like starting a newsletter or choosing a new flour or writing in an everyday journal—but all of these steps are always changing us, always moving us one way or another. We are rarely static. 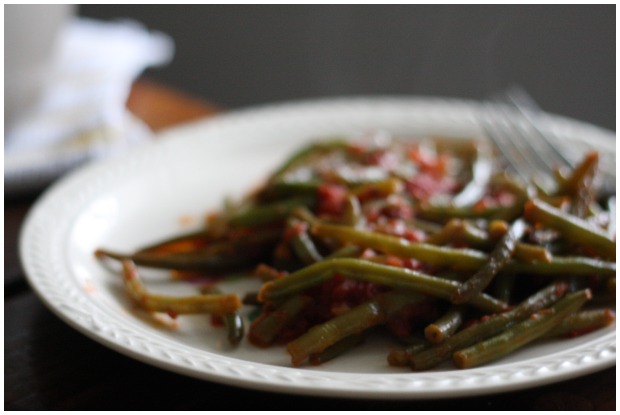 And today, from the two-years-later, different perspective of having lived in Tennessee two winters and two summers, from a lifestyle that means working at our dining room table and eating meals like these green beans for dinner, from more than a year of marriage to a man who is not only my best friend but also, literally, the smartest man I know, all I feel is thankful.

While we were in Ohio this past weekend, spending time with the people who have known Tim longest and best, I kept thinking how blessed I am to have this person who researches olive oil for fun and experiments with einkorn doughnut recipes on a Friday morning and reminds me to find pleasure in the smallest, silliest daily routines. These last two years in Nashville, while filled with ups and downs, have been two of my best.

Italian-Style Green Beans
Makes enough for two for dinner; or four as a side dish

Tim’s grandma would give you this recipe by saying something like, “Sauté a little garlic in oil with tomatoes and green beans.” And really, while the directions below are more specific, with the measurements and details we jotted down as we cooked, her basic instructions aren’t bad. The thing to remember with recipes like this one is that they’re less about precision and more about a general idea, which, for the record, is exactly what makes recipes like this one easy to like.

, which is very liquidy, even though it’s pure tomatoes; you want something that can get saucy with the green beans and cover everything)
24 ounces (1 1/2 pounds) frozen green beans
LOTS of salt, but to taste
Pepper, to taste

Directions:
Set a large, deep sauté pan or pot on the stove, and use it to warm the olive oil and garlic over medium-low heat, cooking until the garlic starts to brown. Add the tomatoes and cook down for five minutes or so, just enough time to let the tomatoes get infused with the garlic oil flavor. Add green beans and stir to coat them with the tomato mixture. Simmer this mixture for 20 to 35 minutes, covered, until the beans are soft and wilty. Then, add salt—a couple hefty dashes—and taste; add more salt and taste; add more salt and taste; until it’s the flavoring you like. While you will need a large amount of salt, and while salt is hard to overdo in tomato-based dishes, still be careful: it’s much easier to add more salt than to wish you hadn’t. Pepper to taste as well. Enjoy! 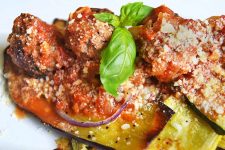 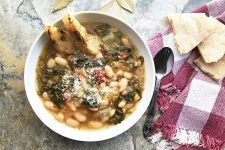 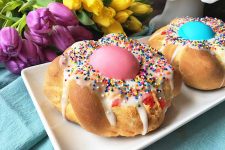 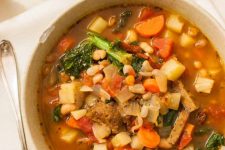 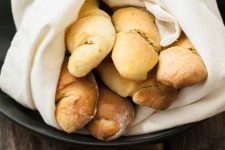 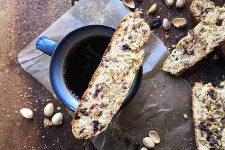 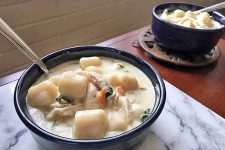 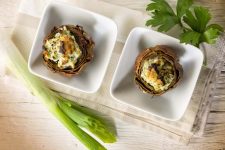 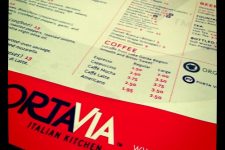 Pizza at Porta Via Italian Kitchen 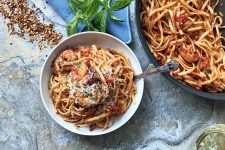 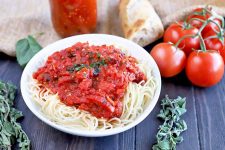 Simple Marinara Sauce Is a Must for the Best Italian Dishes 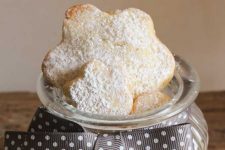 33 thoughts on “Italian-Style Green Beans: A Simple Savory Side”