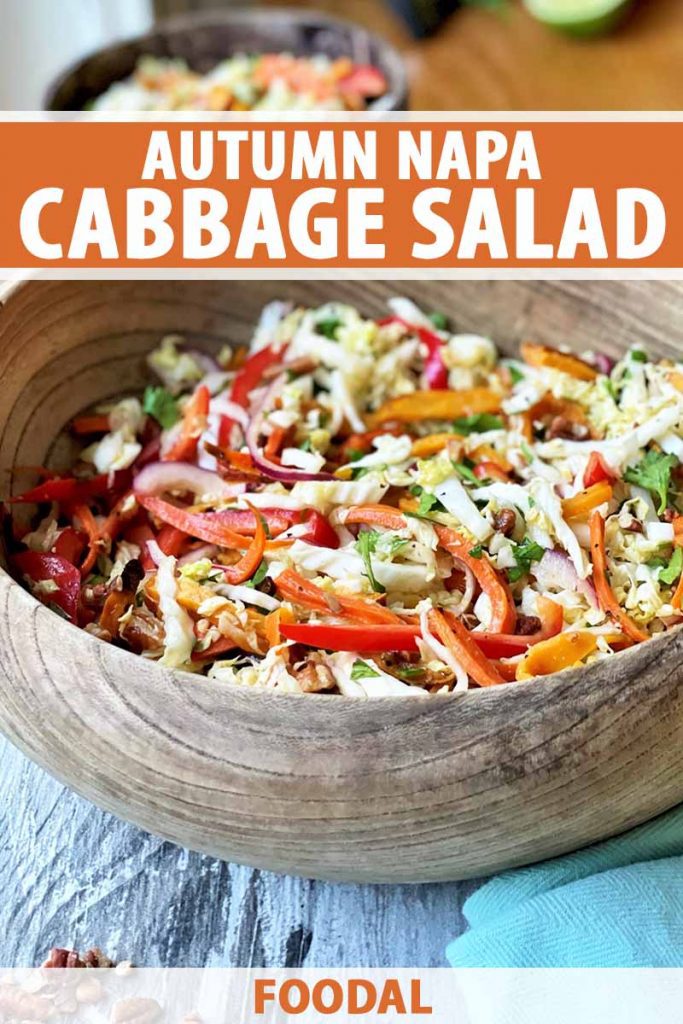 Just because the air has turned cool and it’s time to put away your flip-flops and tanning spray, that doesn’t mean you have to start diving into hearty casseroles and rib-sticking stews right away. 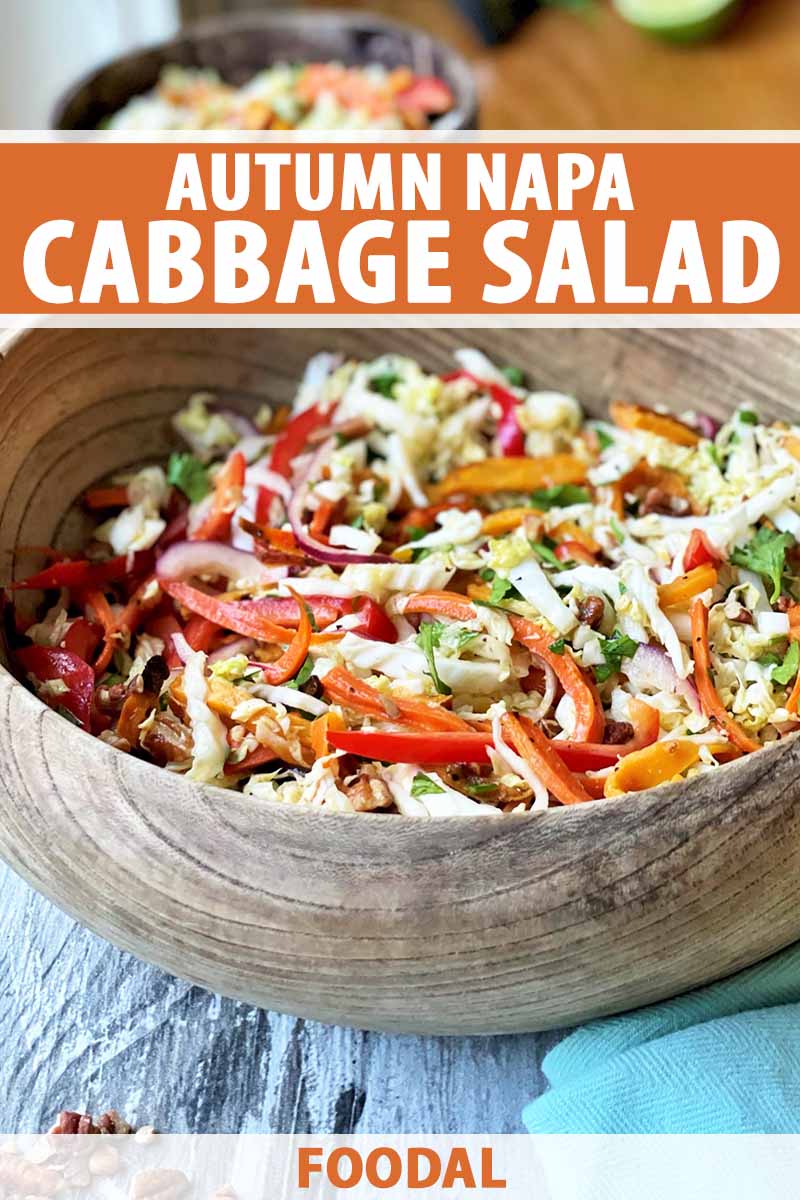 I mean, I love a piping hot, comforting meal on a blustery day. But the arrival of early autumn weather doesn’t mean I stop craving fresh flavors.

That’s where this salad comes in. It combines the best of both worlds by throwing together crisp, refreshing elements like cabbage and bell peppers with fall-favorite veggies like roasted sweet potatoes and nutty toasted pecans.

You know the expression, “No great story ever started with someone eating a salad”? No? Well, this vibrant dish proves that theory to be very, very wrong.

If the idea of cabbage salad immediately whisks you back to memories of cool, creamy mayo-based slaw draped over chili dogs (whoa, I just got really hungry), I’m going to need you to back up. 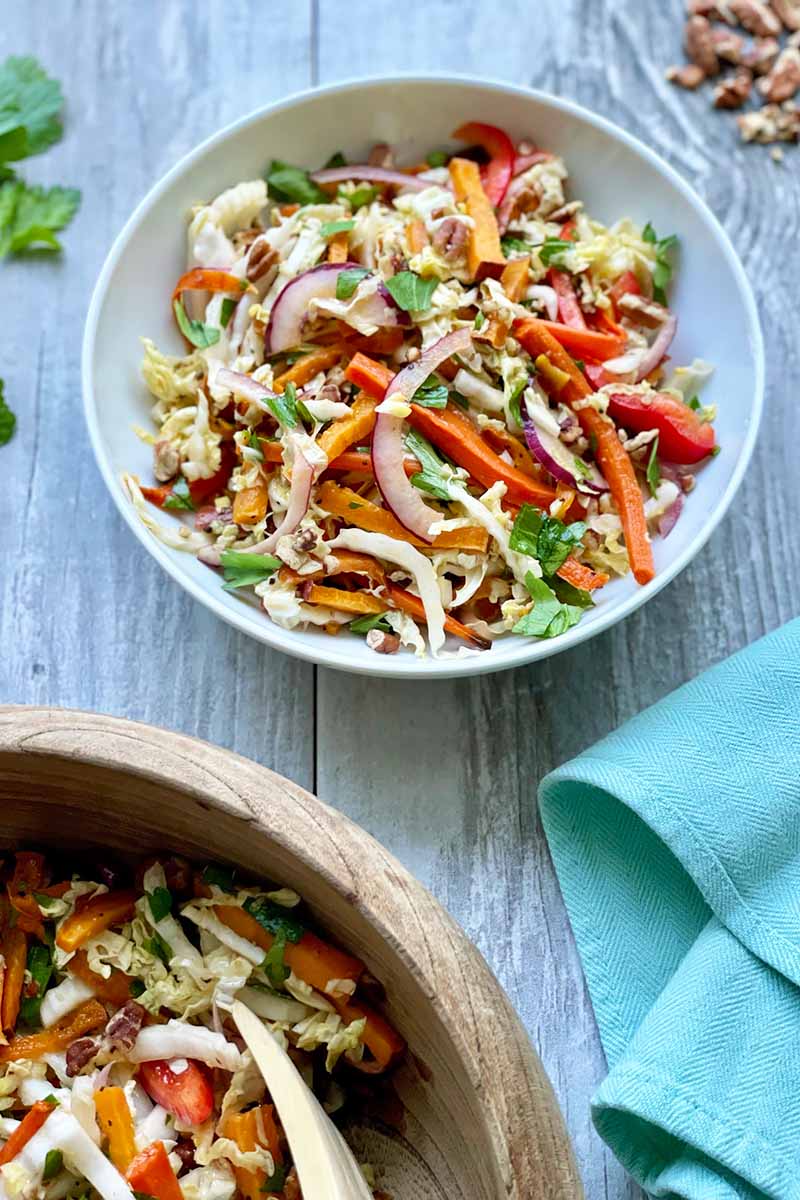 Though cabbage is clearly one of the main ingredients in this recipe, hence the name, we’re not in summer slaw land anymore, Toto. Instead, we’re grabbing our beanies and hoodies, and heading straight for comfort town.

Between the sugary smell of sweet potatoes and carrots roasting away in the oven, and pecans releasing their buttery essential oils into the air, preparing this dish will have you thinking it’s Thanksgiving morning.

And speaking of things to give thanks for, let’s give some nods to napa cabbage for a hot minute.

While napa cabbage can certainly stand up to heat (I dig throwing it into stir fries or homemade egg rolls), its delicate composition, especially when thinly sliced, makes it an ideal ingredient for eating raw. And, yes, this salad may look too pretty to eat, but you’ll want to do it anyway. 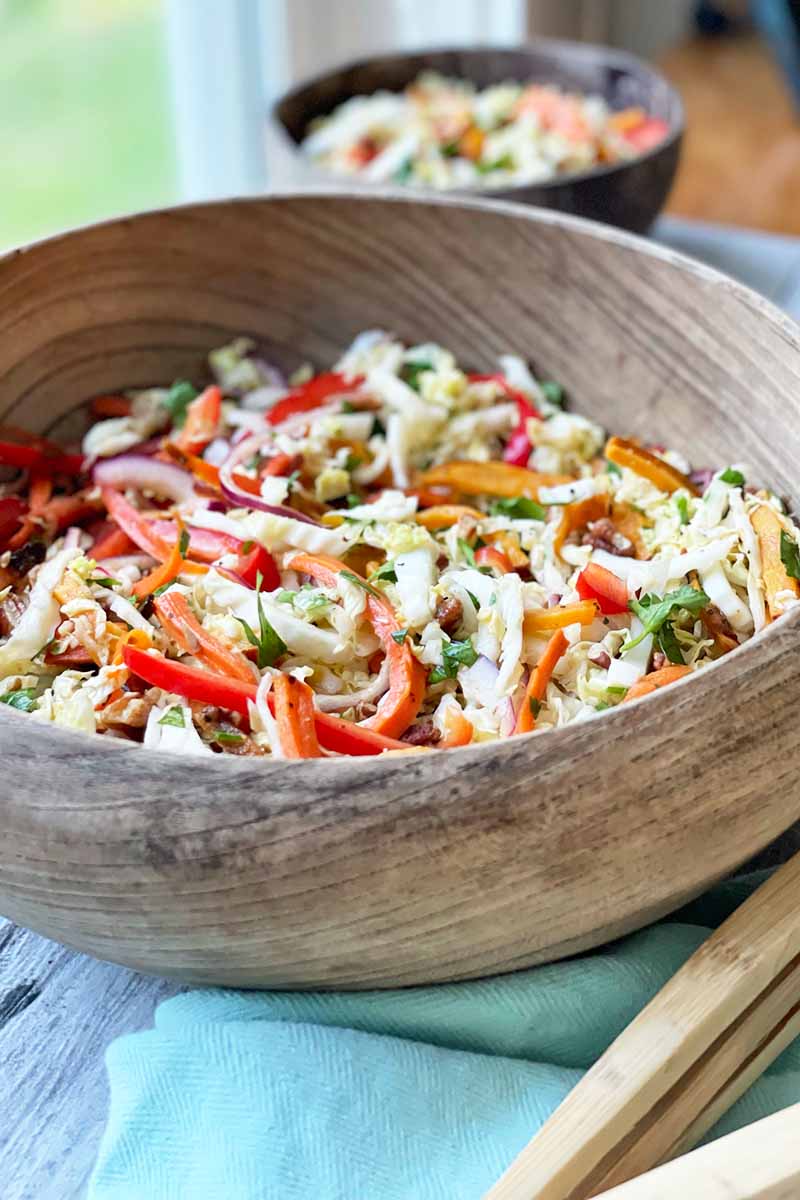 When it comes to texture, there’s no shortage of that either. The sweet potatoes and carrots are lightly caramelized in the oven but they stay tender, while the cabbage and bell pepper hold up their ends of the bargain as the “crisp” bites.

If you really want to go crazy with texture, I’d suggest topping off this salad with my recipe for savory granola. It will add a completely new dimension of both crunch and flavor!

As for that pungent, raw red onion? It gets softened by the citrusy dressing and basically melts in your mouth. Speaking of the dressing: hello, simplicity, my old friend. And does it get any better than sweet and spicy when you’re crafting the ideal flavor profile?

At first glance, the tart vinaigrette may just seem like it’s simply heightened by the syrupy honey, but it’s the dash of hot sauce that gives it depth and character. Feel free to adjust the heat level to your liking.

Though it’s the sweet potatoes who truly bring the earthy flavor and autumn essence, if you don’t put rich, nutty pecans in your fall salad… was it really even fall? I highly recommend including this ingredient without fail, toasted to perfection.

Whether you decide to dish this colorful combo up on the side of a filling entree or place it at center stage for your supper, when you look back on your meal later, you’ll be glad this is one story that started with a salad.

Get lost in the luscious colors of this autumn-inspired salad made with crunchy napa cabbage, sweet roasted carrots and sweet potatoes, and toasted pecans.

Step 1 – Toast the Nuts and Prep the Veggies

Add the pecans to a large dry skillet, and place over medium-low heat.

Shake the pan occasionally to toss the nuts, to promote even browning. Cook until golden and lightly toasted, for about 5 minutes.

Remove the nuts from the pan and set them aside on a plate so they’re completely off the heat. 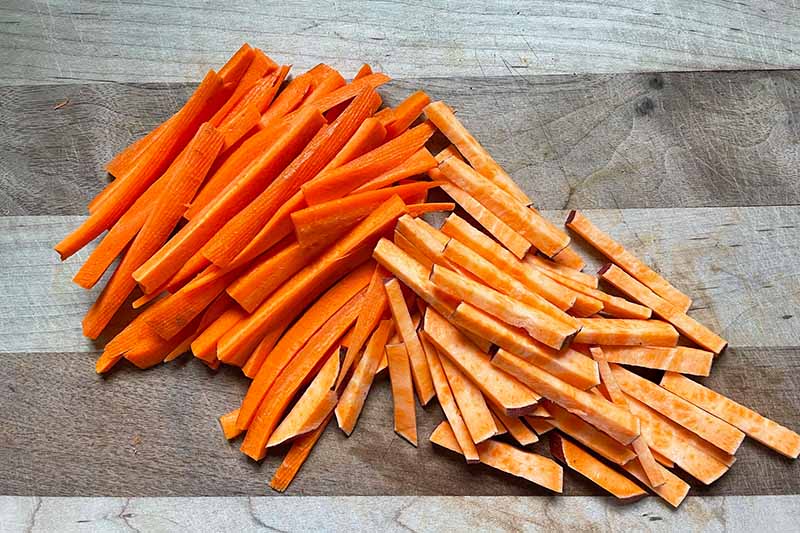 Scrub the sweet potatoes well, and peel the carrots. Trim the ends.

Cut the sweet potatoes and carrots into matchsticks by first slicing them in half lengthwise, and then slicing those halves in half crosswise. Working with a small bunch at a time, keep running your knife through the veggies lengthwise until you have long, skinny matchsticks that are about 1/4 inch thick and 4 inches long.

It’s okay if the length varies a bit, but you want the thickness of the veggies to be the same so they cook evenly in the oven. 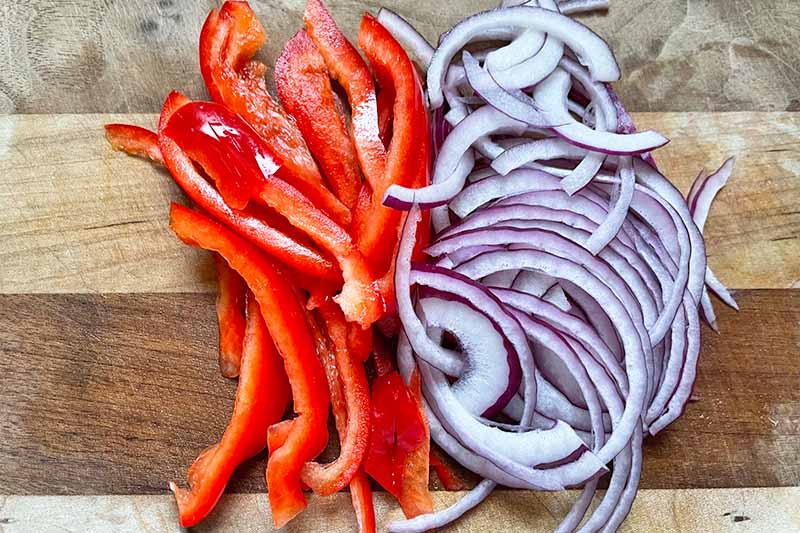 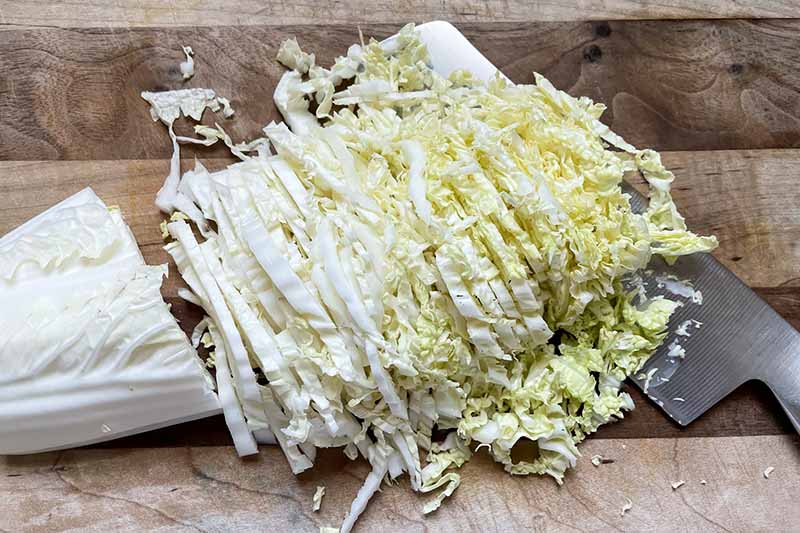 Remove the core and slice the cabbage into ribbons.

Melt the coconut oil either in a small bowl in the microwave, or in a small saucepan over low heat on the stove. Allow the oil to cool slightly before tossing it with the veggies. 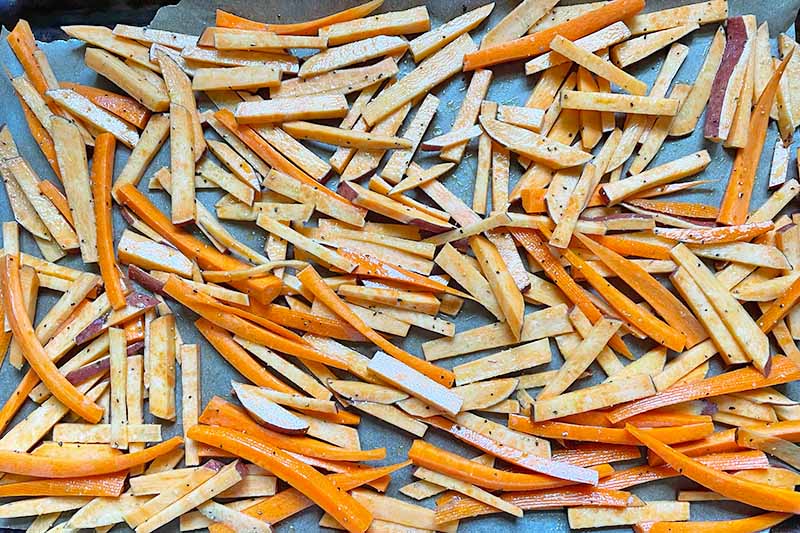 Preheat the oven to 400°F, and prepare two baking sheets by lining them with parchment paper.

Spread the root vegetables onto the parchment paper-lined baking sheets in a single layer, leaving some space between the pieces to prevent steaming.

Roast in the oven, tossing every 15 minutes until they are golden brown and tender, for about 45 minutes total.

Remove from the oven and allow the veggies to cool completely on the pans. 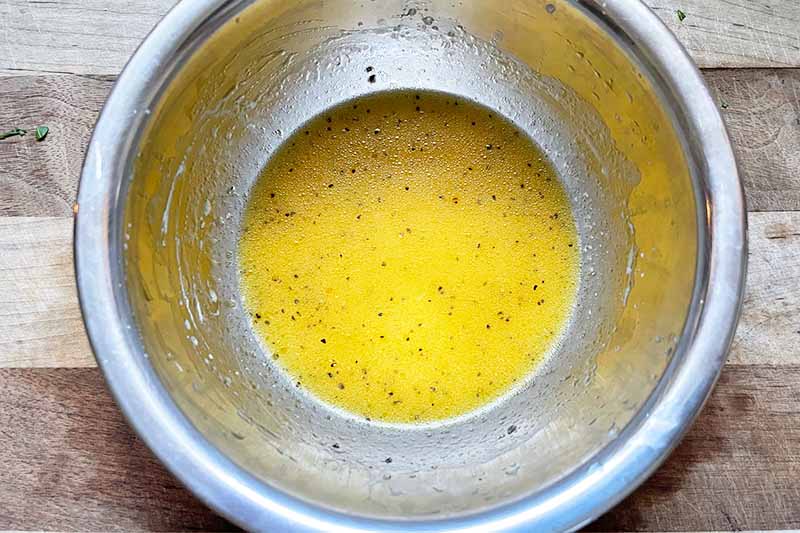 You can substitute sour cream for the Greek yogurt, and only use one type of citrus if you prefer. Agave syrup can also be used in place of the honey.

Whisking as you pour, slowly stream in the olive oil until the dressing comes together and emulsifies. Season to taste with additional salt and pepper.

Step 4 – Toss the Salad and Serve 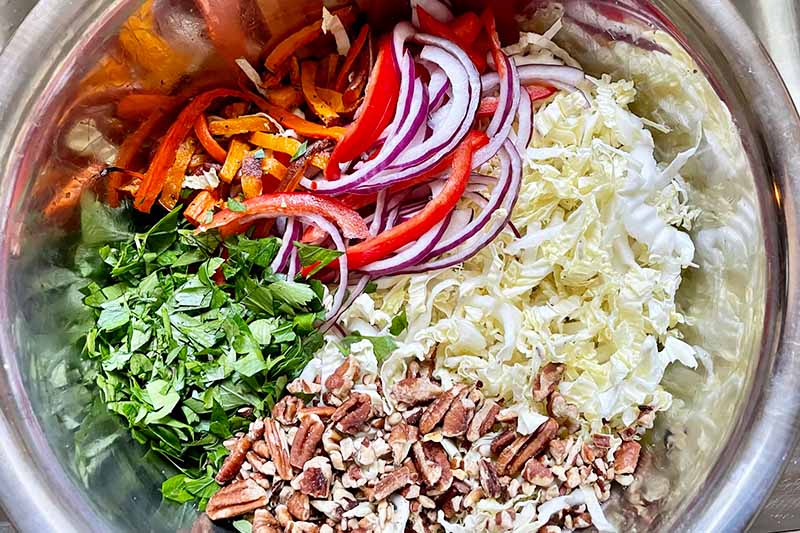 Once the roasted sweet potatoes and carrots have cooled, add them to a large mixing bowl along with the toasted pecans, cabbage, red onion, and bell pepper. Add the dressing and parsley, and toss to coat. 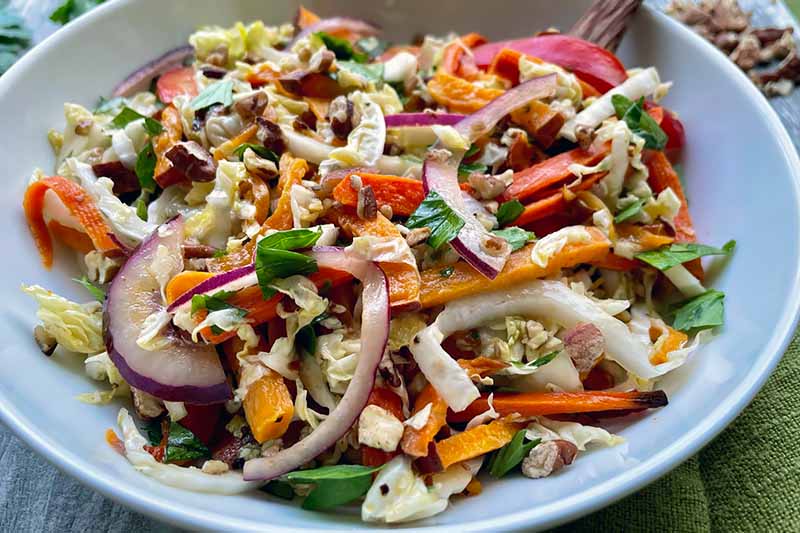 Divide among plates, and serve either chilled or at room temperature. Store in an airtight container in the fridge for up to 3 days.

Fall in Love with This Autumn Salad

This feel-good fall blend of seasonal ingredients will remind you that summer isn’t the only time to eat healthy. Who knew nutritious veggies could also be so cozy and comforting? 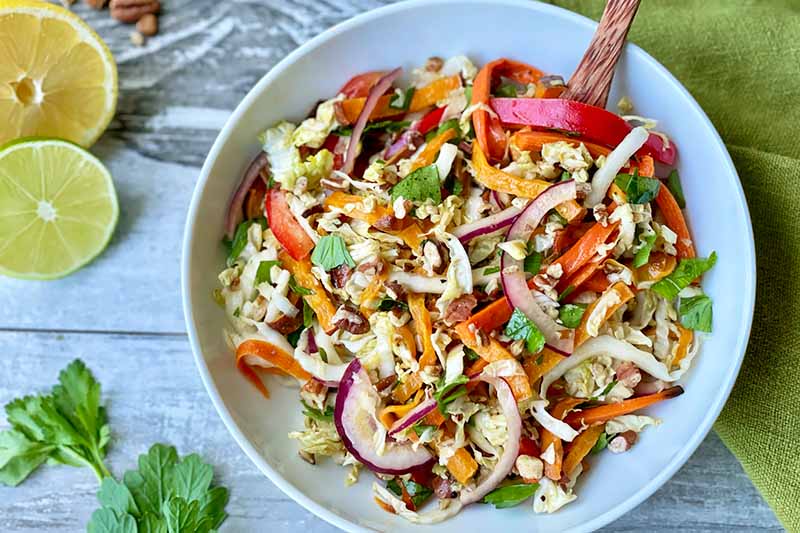 Try tossing in some arugula to give each bite a touch of peppery flair. And if you think walnuts are a totally acceptable swap-in for the pecans, I say you’re absolutely right. Give it a try! A drizzle of maple syrup over the carrots and sweet potatoes before roasting never hurt anybody either.

Want to hear my own personal favorite naughty twist on this dish?

Topping it with warm, gooey, panko-fried goat cheese rounds. How in the world do you make those? I’ve got you. Find instructions here.

This is where the drool emoji comes in handy.

For even more unique spins on salad, these veggie-centric recipes will fill you up without slowing you down:

How will you nudge this dish even more towards fall? Share your creative ideas in the comments below! And don’t forget to give this recipe a five-star rating if you loved it. 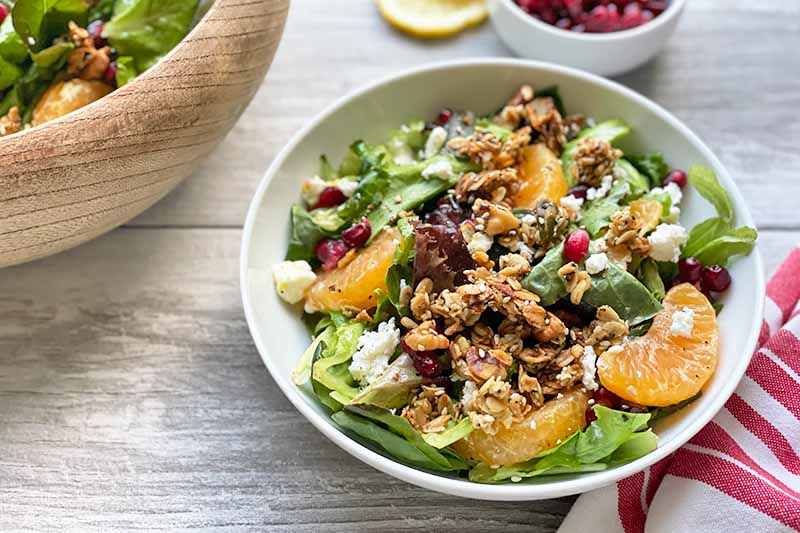 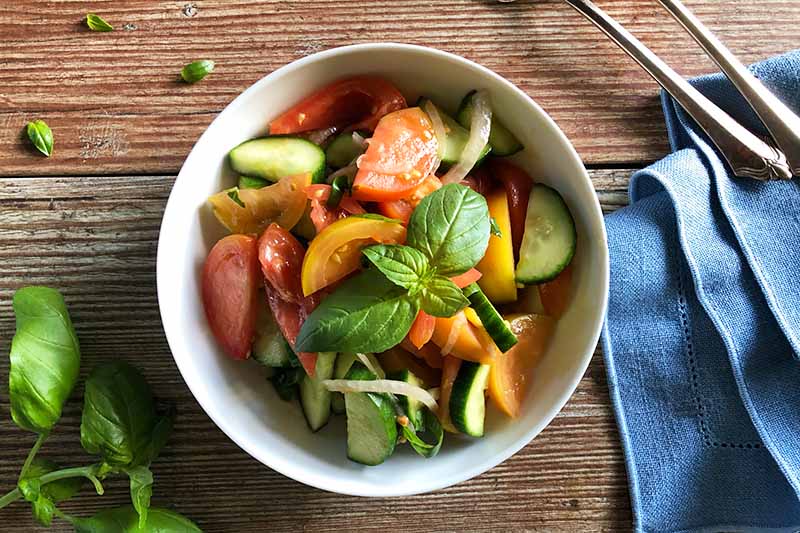 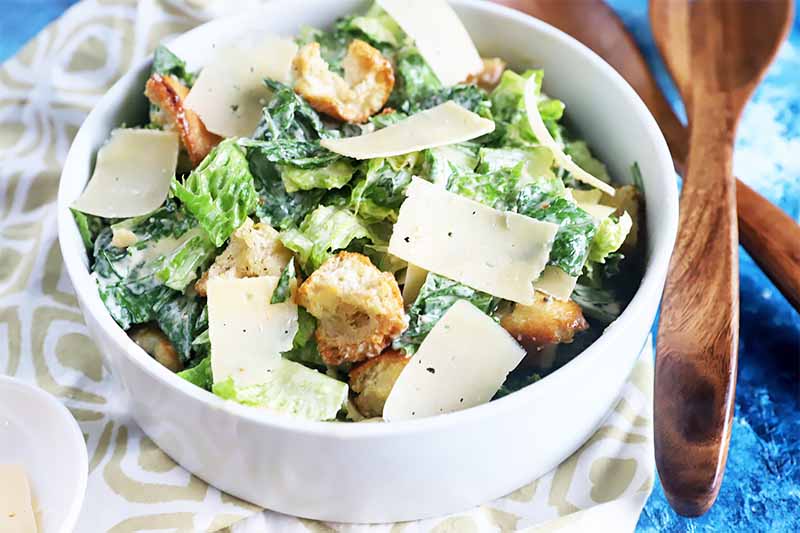